A pair of primers were designed according to the nsp5 gene of human group B rotavirus strain WH-1, and the nsp5 gene was amplified by PCR and subcloned into the expression vector pGEX-KG. After induced with IPTG, the NSP5 was expressed as a GST fusion protein in the soluble form. Then the protein was purified and immunized mice to obtain specific antiserum. At last, polyclonal antibody was analysed by Western Blot and the result indicated the specification and high titer of the antibody. This work provides important information of the immunogenicity and possible function exploration of NSP5, which is helpful for futher study on virus replication and pathogenic mechanism.

Rotavirus, a member of the Reoviridae family, is the most important cause of severe diarrhea in infants and young children worldwide. Rotavirus is a double stranded RNA virus with a genome comprising 11 linear segments, each encoding one or two virus proteins (VPs1, 2, 3, 4, 6, and 7). It is divided to seven groups (A to G) according to the epitopes of VP6, and only three groups of rotaviruses, i.e., group A, B, and C rotavirus are known to cause gastroenteritis in humans[1,2]. Group A rotavirus is the most common cause of infantile gastroenteritis, whereas group B rotavirus causes severe cholera-like diarrhea mostly in adults which is quite distinct from Group A rotavirus[3]. Human group B rotavirus(GBRV) was firstly identified as adult diarrhea rotavirus (ADRV) in nationwide outbreaks in China in 1982 and 1983[4,5]. Thereafter, diarrhea cases due to group B rotavirus have been reported exclusively in China[6] and accordingly this virus was regarded as an endemic pathogen in China[7]. During an epidemiological survey of rotavirus in adult patients with diarrhea in 2002, two cases of group B rotavirus infection was detected by Wuhan Centers for Disease Prevention and Control[8]. Seroepidemiological studies also suggested that the prevalence of group B rotavirus infection in some other countries was low. However, group B rotavirus infection was detected from adult in sporadic cases from Calcutta, India in 1997, Bangladesh in 2000 and recently from western part of India [9,10]. People still cannot propagate this virus in vitro though a great of efforts have done. This situation extremely affects our understanding of the property of group B rotavirus.

It was reported that the NSP5 protein played an important role in the replication of viral genome[11]. NSP5 can also bind to ssRNA and dsRNA without sequence specificity[12]. In addition, using RNA interference to inhibit the NSP5 synthesis can reduce the virus dsRNA production[13,14]. NSP5 is also an essential protein for the formation of viroplasms[15]. Because of no cellular and animal models to propagate this virus in vitro and fewer clinical cases until now, it hindered us to known about the function of NSP5 and other proteins of GBRV. In previous study, nsp5 gene of group B rotavirus was cloned by Wang, et al., in 2005, and the sequence and structure of this gene was analyzed using bioinformatic tools [16]. In this study, nsp5 protein were expressed in prokaryotic cells, then the expressing protein was purified and immunized mice to generate polyclonal antibody. The specificity of antibody was determined by Western Blot. This study will provide the useful information for the research on the structure and function of NSP5.

Specific pathogen-free grade Balb/C mice were purchased from Centers for Disease Prevention and Control of Hubei province. All animal experimental protocols were approved by the Institutional Animal Care and Use Committee.

Following primers were designed based on the sequence of nsp5 gene (AY539863) of human group B rotavirus strain WH-1(restriction endonuclease cutting sites were indicated in italics):

ORF of nsp5 gene was amplified from plasmid pUCmTNSP5. PCR was performed in a final volume of 50μL containing 10ng extracted DNA, KOD-Plus 1U, 10×PCR Buffer 5 μL，MgSO4 1mM(TOYOBO), dNTP 0.2 mM, 1μM of each primer. The amplification was carried out as follows: initial denaturation at 94 ℃ for 5 min, 30 cycles of 94 ℃ for 45 s, 55 ℃for 45 s and 68℃ for 45 s, then a final extension at 68℃ for 10 min. Amplification was performed in a PTC-220 DNA Engine Dyad Cycler(MJ Inc.). PCR products were analysed by electrophoresis on 1% agarose gel containing ethidium bromide. After digestion with BamHI and EcoRI, the PCR product was subcloned into the expression vector pGEX-KG and confirmed by restriction enzyme digestion and sequencing. The correct recombinant prokaryotic expression vector was named as pKG-nsp5.

The prokaryotic expression vector pKG-nsp5 was introduced into the bacterial host Escherichia coli BL21 (DE3) following standard protocol and expression of the fusion gene was induced with 0.5mM isopropyl-β-D-thiogalactopyranoside (IPTG) in 16℃ overnight. The bacteria cells were collected by centrifugation at 5000g for 10min, washed with PBS for three times then resuspended with PBS in proper volume. Finally, all bacteria cells were lysed in SDS sample buffer for 10min at 100℃, and the lysates were analyzed by SDS-PAGE. The recombinant products were accumulated in the form of soluble protein.

The GST-NSP5 fusion gene was expressed on a largescale and the clear supernatant was applied in prepared Glutathione Sepharose 4B(Amersham), then purified the fusion protein according to the standard column purification protocol. The purified protein was eluted with Glutathione Elution Buffer (0.154 g of reduced glutathione dissolved in 50 ml of 50mM Tris-HCl ,pH 8.0).

Female BALB/c mice, 6-8 weeks old, were purchased from Centers for Disease Prevention and Control of Hubei province. Animals were maintained under pathogen-free conditions and randomly divided into control group and sample group (5 mice each). The sample group was subcutaneously injected with 50μg of GST-fusion protein every two weeks. Complete and incomplete Freund’s adjuvants (1:1, Sigma-Aldrich, St. Louis, MO) were used for the first and other immunizations, respectively. After two times boosting, blood samples were taken from the marginal vein of the mouse eyes, centrifuged, and the sera were frozen.

Detection of the specific antibody by Western blot

After harvest the antiserum, series diluted antiserum was performed for measuring the optimal concentration. Non-induced, induced, and purified proteins were analyzed in 12% SDS-PAGE according to the standard procedure. After electrophoresis, the gel and proper filter paper were immersed in the transfer buffer(48mM Tris-HCl, 39mM glycine, 0.0375% SDS, 20% methanol), and the proteins were transferred to Hybond-C membranes by semi-dry electrophoresis transfer (Bio-Rad) at 15 V for 20min. The membrane was blocked overnight in TBS with 5% (w/v) skimmed milk powder at 4℃. After being washed three times (10min each) with TBS-T buffer (50mM Tris-HCl, pH 7.5, 200mM NaCl, and 0.1% Tween 20), the membrane was incubated with the anti-NSP5 polyclonal antibody (diluted from 1:750 to 1:6000) as the primary antibody for 1 h at room temperature. Then being washed, the membrane was incubated for 1h with alkaline phosphatase (Ap)-conjugated goat anti-mouse IgG (diluted 1:2000, Sino-American) at room temperature. The blots were washed in TBS-T and the signals were detected using a BCIP/NBT kit (Sino-American).

Cloning and construction of expression vector of nsp5

A 513bp fragment was amplified from pUCmT-NSP5 plasmid (Figur1) and the product was purified by gel extraction kit (OmegaBio-tek, America) then cloned to the pGEX-KG expression vector digested by BamHI and EcoRI (Figur2). The recombinant plasmid was confirmed by sequence and compared with the published NSP5 ORF sequence in GenBank (AY539863).Expression of recombinant protein GST-NSP5 and SDS-PAGE analyze. 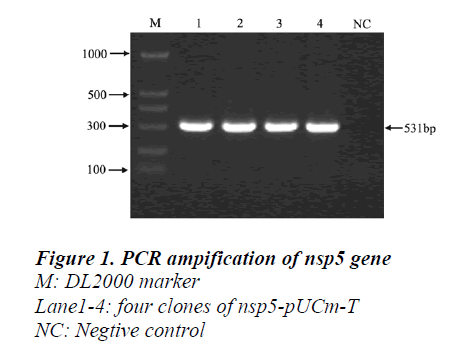 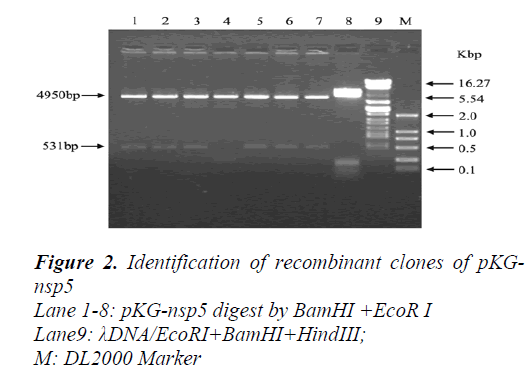 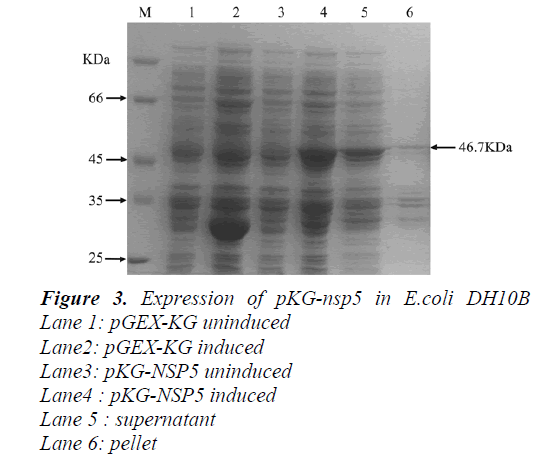 The purified protein was injected to specific pathogen-free grade Balb/C mice subcutaneously. The animals were boosted two times with an identical dose at the same injection site, then the specific antiserum was collected for western blot analyze. The result showed that the GST-NSP5 could be recognized by the polyclonal antibody against the GST protein about 28kD (Fig4.lane2) and fusion protein about 46.7kD (Fig.4 lane4,5,6,7). However, in the group of lysates from bacteria without induction, no obvious band was detected (Fig4.lane1,3). In addition, purified protein showed a specific reaction with the NSP5 polyclonal antiserum, and the titer of the antiserum is at least 1:6000. These results indicated that the antiserum had high specificity and sensitivity to NSP5. 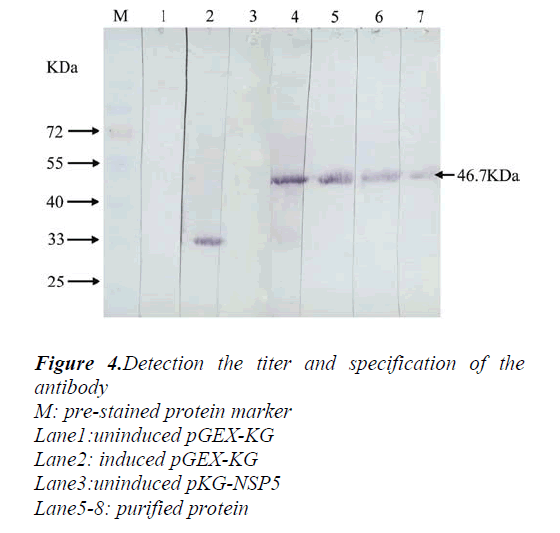 Figure 4: Detection the titer and specification of the antibody

Rotavirus is one of the major causes of diarrhea of infants and the elderly. Most researches focus on Group A rotavirus, whereas little is known about the group B rotavirus because of the difficulty of adapting GBRV in a cell culture system and the relative rarity of the GBRV isolates reported[3]. This is an obstacle in studying the molecular biology of GBRV. Therefore, we initiated research for novel drug targets by investigating the characteristics of some key genes involved in infection of group B rotavirus. These studies add useful information to our current understanding of the sequence diversity and functions of the non-structural proteins encoded by group B rotavirus genes. Phylogenetic analysis showed that nsp5 gene of WH-1 and ADRV had evolved from a common ancestor [10]. Previously study revealed that NSP5 of group A rotavirus was located in viroplasms and appeared to be associated with NSP2, then promotes NSP5 phosphorylation [15,17]. This suggested that the non-structural protein might play a role in the virus replication cycle and can be considered as a good target for therapeutic purposes.

There was a report that 600 thousands people died each year in the world because of rotavirus diarrhea and several choleraic diarrhea caused by group B rotavirus in China[18], especially the outbreaks in Anhui and Guangxi province in 1983[6]. Moreover, group B rotavirus infection is important in view of public health policy because this virus causes severe diarrhea in adults, which bring great damage to gross output value of industry and agriculture. The emergences of these group B rotavirus strains these years reflect a disturbing trend and warrant stringent surveillance in the future. In current study, NSP5 protein of WH-1 was expressed in Ecoli. After purification of this protein, we injected to specific pathogen-free grade Balb/C mice and obtained specific polyclonal antiserum. This adds more information about group B rotavirus nsp5 gene and will be useful for understanding the diversity and characteristic of molecular biology of nsp5 gene. Moreover, this study can also pave the way for exploring the possible function of this protein and virus replication and pathogenic mechanism.

This work was supported by National Natural Science Foundation of China grant no. 81401658. We thank Xuefang An for her assistance in the animal study.