Prognostic value of neutrophil to lymphocyte ratio in patients with nasopharyngeal carcinoma: A meta-analysis

This study was aimed to investigate the prognostic significance of Neutrophil to Lymphocyte Ratio (NLR) for patients with Nasopharyngeal Carcinoma (NPC) by the analytic approach of meta-analysis. We searched databases of PubMed, Emabse and Web of Science and included 6 studies with 3,469 patients in the meta-analysis. All included studies were from China. The association between NLR and four end-points events, Overall Survival (OS), Progression-Free Survival (PFS), Disease-Specific Survival (DSS) and Distant Metastasis-Free Survival (DMFS) was evaluated by using STATA version 12.0. Elevated NLR was associated with poor OS (HR=1.73, 95% CI: 1.37-2.13, p<0.001), PFS (Hazard Ratio (HR) =1.57, 95% CI: 1.19-2.09, p=0.002), DSS (HR=1.41, 95% CI: 1.19-1.66, p<0.001) and DMFS (HR=1.91 with 95% CI: 1.35-2.71, p<0.001). Furthermore, there was no significant heterogeneity and publication bias for all analyses in our study, indicating the robustness and credibility of this metaanalysis. Our study showed that elevated NLR was a significant biomarker for poor OS, PFS, DSS and DMFS in NPC. NLR was a potential valuable marker for NPC treatment.

Nasopharyngeal Carcinoma (NPC) is a rare cancer type worldwide, especially less seen in Western countries and Africa. However, in South-East Asia and Southern China, NPC is endemic [1]. In 2010, the incidence rate of NPC is 4.33/100,000 for male patients and 1.92/100,000 for female patients in China, respectively [2]. NPC is generally sensitive to radiotherapy and chemotherapy, therefore, radiotherapy alone or in combination with chemotherapy is the recommended standard treatment for first diagnosed NPC, either for non-metastatic or metastatic disease [3,4]. Furthermore, the fast growing of concurrent chemo radiotherapy and targeted therapy provides multiple treatment options for NPC [5]. Faced with various therapy modalities, it is essential for clinicians to select more optimum therapy for individualized patients. Currently, the prognosis for NPC is often based on Tumour-Node-Metastasis (TNM) stage [6], whereas its prognostic efficiency is usually compromised due to unsatisfactory specificity and sensitivity. As a result, novel and low cost prognostic biomarkers are urgently needed.

Current evidence demonstrates that inflammatory cells play a pivotal role in cancer occurrence and progression [7,8]. In tumour microenvironment, inflammatory cells secrete a variety of cytokines to promote cancer development, whereas, innate immune responses could simultaneously up regulate the amount and activity of lymphocytes to attack cancer cells [8]. Neutrophil-to-Lymphocyte Ratio (NLR) is easy to obtain from peripheral blood count and can also reflect the host inflammation responses. Previous have shown that NLR was a significant prognostic marker in various solid tumours, including non-small cell lung cancer [9], hepatocellular carcinoma [10], breast cancer [11], gastric cancer [12] and prostate cancer [13]. Meanwhile, accumulated evidence showed that NLR also possessed potential prognostic value for NPC [14-16], while some other studies [17-19] did not detect the impact of NLR on NPC prognostication. To comprehensively clarify the different results from various studies, here, we employed the analytic method of meta-analysis. We thoroughly search relevant publications and meta-analysed the data to investigate the precise prognostic role of NLR in NPC.

Two investigators (YB and ZHL) extracted the following information from eligible articles: name of first author, country, year, number of patients, treatment strategies, cut-off value for NLR and survival outcomes. Discrepancies between two investigators were resolved by discussion with the third investigator (RSW). The quality assessment of included studies was independently applied using the Newcastle-Ottawa Scale (NOS) [21]. The total possible score of NOS was 9 stars. Studies with>6 stars were regarded as being of good quality.

Statistical analysis was performed using Stata version 12.0 (Stata-Corp, College Station, Texas, USA). Hazard ratios (HRs) and their 95% CIs were used to evaluate the association between NLR and survival outcomes. HRs and 95% CIs were extracted from included studies to calculate pooled HRs. Both fixed effects model and random effects model were carried out and heterogeneity was assessed using the Cochran Q test and I2 statistic. I2>50% or Ph<0.1 indicated significant heterogeneity, then results from random effects model were picked, otherwise fixed effects model was selected. Potential risk of publication bias was evaluated by Begg’s test and visual inspection of funnel plots. Statistical significant level was set at p<0.05.

Initial literature search identified 48 records from electronic databases. Then duplicate publications were rejected and titles and abstracts were screened. Eight studies came into full text evaluation whereas one study [22] provided various cut-off values for NLR and another article [23] investigated head and neck cancer rather than NPC alone, so these two studies were excluded [22,23]. Finally, six studies involving 3,469 patients were included for meta-analysis [14-19]. The literature selection process was shown in Figure 1. The articles were published from 2011 to 2015 and were all conducted in China. Sample sizes ranged from 211 to 1,895 and the cut-off values for NLR ranged from 2.5 to 5. The relevant characteristics of included studies were presented in Table 1. 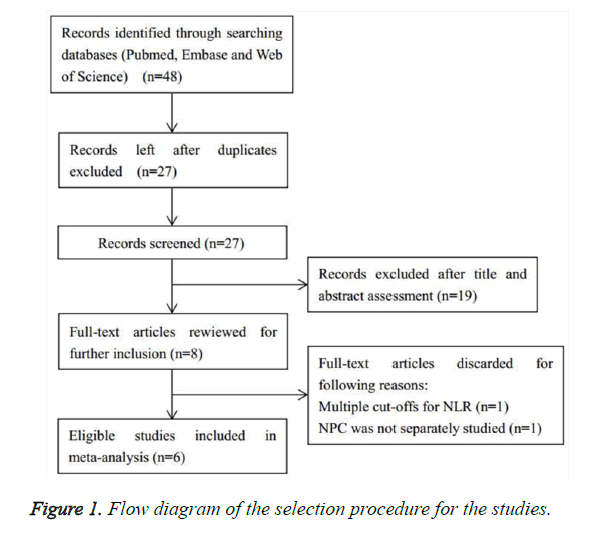 Figure 1. Flow diagram of the selection procedure for the studies.

Prognostic value of NLR for OS, PFS, DSS and DMFS

Table 2. Main results of the meta-analysis for NLR in NPC prognosis. 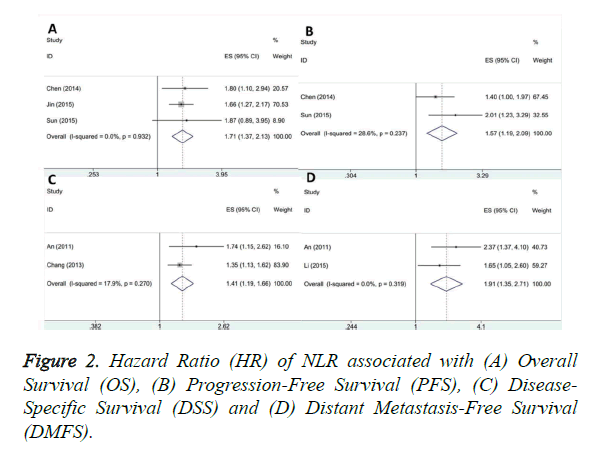 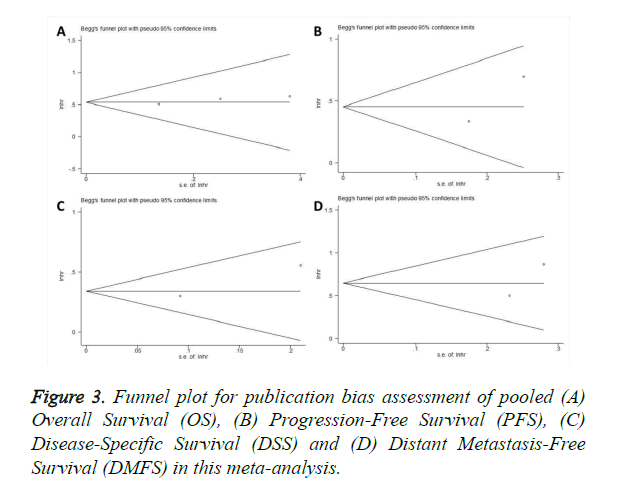 NLR is a serum based parameter which can reflect the immune responses status in cancer patients [24]. Previous studies have reported that NLR could be used as an efficient prognostic marker in various cancer forms whereas its prognostic value for NPC was still controversial. In the present study, we used meta-analysis approach and showed that elevated NLR was associated with worse OS, PFS, DSS and DMFS in patients with NPC. We for the first time systematically and comprehensively investigated the correlation between NLR and four end point events for NPC patients in a single study. Furthermore, the results of our analysis were robust and credible. To our knowledge, this is the first meta-analysis exploring the prognostic role of NLR for survival analyses in NPC.

In the last two decades, growing evidence showed that there was a strong linkage between inflammation and cancer [8,25]. By recruiting immunosuppressive cells and activating chemokines, cancer cells induce immune tolerance in tumour microenvironment and result in cancer development and metastasis. On the one hand, neutrophils have been reported to facilitate tumour growth and metastasis through releasing Reactive Oxygen Species (ROS) and Nitric Oxide (NO) [26]. In addition, tumour-associated neutrophils have been shown to secrete inflammatory mediators including IL-1, TNF and IL-6 to promote angiogenesis [27]. On the other hand, lymphocytes play an important role in antitumor activity, elevated Tumour Infiltrating Lymphocytes (TIL) have been reported to correlate with prolonged survival in different cancer types [28,29]. The NLR represents an index of pro-tumour and antitumor activity and it is widely available because it is derived from routine test in daily clinical practice.

The results from our study revealed that elevated NLR was a biomarker for worse survival outcomes, which was in line with results from other cancer types, such as lung cancer [9], hepatocellular carcinoma [10] and breast cancer [11]. We have noted that previous meta-analyses have explored the role of NLR for prognostication for various cancers. Whereas, NPC, as a malignancy with high incidence rate in Southern China, the prognostic value of NLR for which was still conflicting based on results from different reports. In the current study, we first clarify the relationship between high NLR and OS, PFS, DSS and DMFS in NPC. Our study provided rational evidence for potential usage of NLR for prognosis.

There were several limitations need to be addressed. First, the meta-analysis only included primary studies from China, which may introduce selection bias because patients with other ethnicity backgrounds were not enrolled. Second, the sample size was relatively small and limited number of studies was recruited for each survival analysis, which inhibits us to performed subgroup analysis.

In summary, our meta-analysis demonstrated that elevated NLR was associated with poor OS, PFS, DSS and DMFS in patients with NPC. Our results provided evidence to recommend NLR as a significant prognostic marker for NPC. However, due to above limitations, large scale studies with diverse ethnicitical patients are needed to verify our findings.