Objective: To determine the demographic and clinical profile of pterygium cases seen at a tertiary referral hospital in the Philippines from January 2012 to October 2015.

Results: Eight hundred sixty six new patients were seen and 53% were female and 47% were male. The mean age was 46.79 +/- 23 years (range 11-82). There was female preponderance across all age groups except in the 21-30 year old group. Forty two percent of the patients worked outdoors, 30% work indoors, and 28% are unemployed. Most of the patients seen were born in Southern Tagalog, National Capital, Western Visayas, Bicol, and Eastern Visayas Region. Most of the patients had bilateral involvement (49%) and the left eye is slightly more involved in unilateral cases (26% left and 25% right). Fifteen percent of patients had bipolar pterygium and mostly involved the left eye (61% left, 27% right, 12% bilateral). Eleven percent of the total cases seen presented as recurrent pterygium. Type 2 pterygium was the most common type, seen in 56% of patients. Grade 2 pterygium was most common, seen in 48% of patients. Appearance of a fleshy mass was the most common reason for consult (91%). Fifty nine percent of patients underwent excision with conjunctival autograft as initial plan, 23% for excision with Mitomycin-C and conjunctivoplasty, 2% for initial Mitomycin C injection of pterygium and excision 1 month after and 16% of patients were for observation.

Conclusion: Pterygium continued to be a common reason for consults in our institution. Most of the pterygium patients seen were female and born in rural areas. The most common pterygium type seen is type 2. Patients working outdoors tend to have fleshy pterygium with more corneal involvement. Conjunctival autograft was the most common surgical intervention for these patients.

Pterygium is a wing-shaped, fibro vascular degeneration of the bulbar conjunctiva that grows toward and over the cornea. It may cause irregular astigmatism, visual impairment, irritation, and cosmetic problems. Dryness, inflammation, and exposure to wind and dust or other irritants may be risk factors for its development but its pathogenesis is most strongly correlated with ultraviolet exposure making it more common in tropical countries near the equeator (Agahan, 2010., Al-Bdour, 2004., Cajucom-Uy, 2010., Chen, 2015., Droutsas, 2010., Essuman, 2014., Fernandes, 2005). It has also been reported several times that increasing age, male gender, outdoor occupation, and systemic factors like hypertension are risk factors suggesting a multifactorial etiology for this condition (Gris, 2000., Küçükerdönmez, 2007., Kurna, 2013). In a systematic review and meta-analysis done by Liu et al which included 20 countries, the geographic pooled prevalence rate of pterygium was around 10% in the general population (Essuman, 2014).

Pterygium can be classified in different ways. Tan et al. classified pterygium based on its fleshiness. It is called atrophic pterygium or type 1 if the episcleral vessels are not obscured, intermediate or type 2 if fairly the vessels are fairly visible and fleshy pterygium or type 3 if the vessels are totally obscured. They reported that patients with outdoor occupation presented with fleshier types and are more likely to recur if excision with bare sclera technique was done (Lim-bon-siong, 2005., Liu, 2013). In a study done by Mahar and Manzar, they noted that a higher level of corneal involvement at presentation correlated significantly with recurrence. They graded pterygium based on the size of its corneal involvement. It is considered grade 1 if the fibrovascular proliferations involve less than ¼ of the corneal diameter, grade 2 if more than ¼ but less than ½, and grade 3 if it involves more ½ of the corneal diameter and obscures the visual axis (Luanratanakorn, 2006). These classifications may help surgeons decide on what surgical technique is to be used. Simple excision with application of mitomycin-C may be used for patients with low risk for recurrence and excision with conjunctival autograft or amniotic membrane transplantation may be used for patients with a higher risk of recurrence. A combination of this two grading system with a suggested treatment plan is currently being used at External Disease and Cornea Clinic of the Department of Ophthalmology and Visual Sciences - Philippine General Hospital (DOVS-PGH) which aimed to give the best treatment option for a patient, to minimize the risk of recurrence while undergoing the least extensive procedure (Appendix 1).

Many epidemiologic studies have been done in different countries however, to our best knowledge, there has been no demographic reports done in the Philippines. It is the purpose of this study to fill the gap in knowledge of the epidemiology of pterygium patients including the identification of target population and risk factors and help establish a cost-effective preventive measure for patients at risk.

A. Study design: This study is a retrospective chart review

Study Population: The study population included all pterygium patients seen for the first time at the External Disease and Cornea Clinic of the Department of Ophthalmology and Visual Sciences - Philippine General Hospital (DOVS-PGH), a tertiary eye referral center, using the pterygium data collection form, from January 2012 to October 2015.

A total of 866 charts of pterygium patients seen in the External Disease and Cornea Clinic of the Department of Ophthalmology and Visual Sciences - Philippine General Hospital (DOVSPGH) from January 2012 to October 2015 were reviewed. Four hundred sixty one (53%) patients were female. Most of the patients were between 30-60 years old with a range of 11-82 and a mean age of 46.79 years old. There is female preponderance across all age groups except in the 21-30 year old group (Table 1 and Figure 1)

Figure 1: Distribution of Patients by Age and Gender.

Eight hundred seven charts (93% of the total charts reviewed) had birthplace filled up. Most of the patients were born in region IV-A (14%) and the National Capital Region (NCR) (14%). Western Visayas (13%), Bicol (12%) and Eastern Visayas (11%) regions were also common birthplaces seen among the pterygium patients studied. 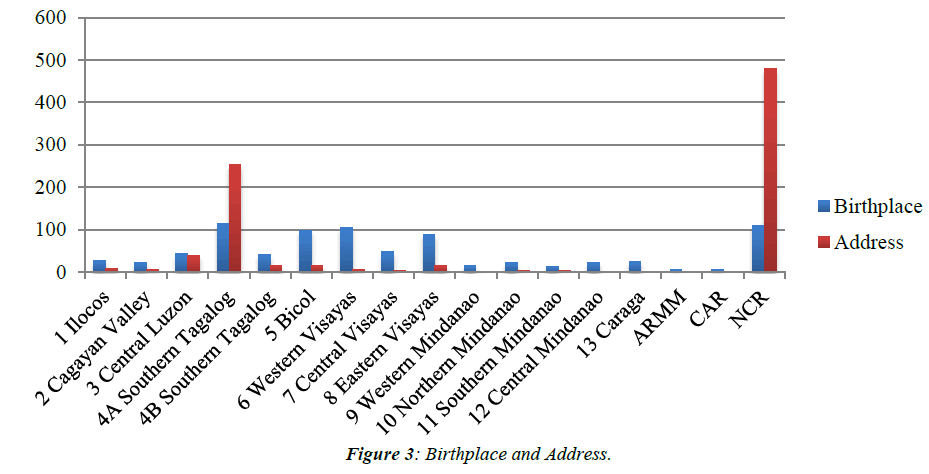 Four hundred twenty one patients (49%) had bilateral involvement. In unilateral cases, 225 (26%) had left eye involvement and 220 (25%) involved the right eye. Ninety-three (11%) of the patients seen had recurrent pterygium (Figure 4). 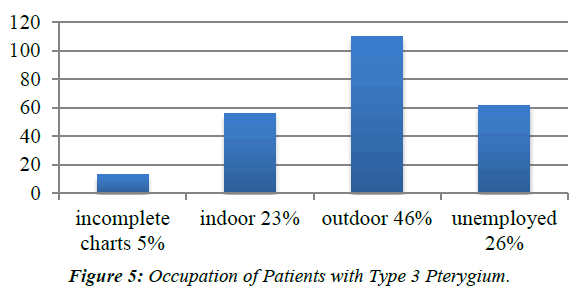 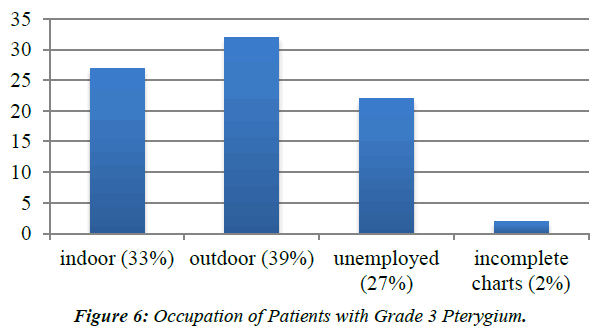 Seven hundred eighty five (91%) patients consulted with a chief complaint of having a fleshy mass. Blurring of vision (3%), foreign body sensation (3%), itchiness (2%), and redness (2%) are other reasons for consult (Figure 7).

There are a lot of epidemiologic studies on pterygium done around the world. To our knowledge, this is the first epidemiologic study in the Philippines. In this study, among the estimated 43,000 new consultations seen at the External Disease and Cornea Clinic of the Department of Ophthalmology and Visual Sciences - Philippine General Hospital (DOVS-PGH) from January 2012 to October 2015, 866 (2%) of them were pterygium patients referred to our clinic.

This study showed that there were more female (53%) pterygium patients who consulted as compared to male. This is similar to the results of Lu5 but different from most of the studies done. Liu et al presented a systematic review and meta-analysis which showed that male gender was considered to be an independent risk factor (Essuman, 2014).The Philippine General Hospital, being the primary referral hospital in the Philippines, is located at the National Capital Region. This explains why most of the patients seen in this study are from NCR. Region IV-A is also a usual place of origin also because of its proximity to PGH. But important to note in this study is that patients born in the Eastern and Western Visayas and Bicol Region were also common. People born in these rural places near the sea have more daily ocular solar radiation exposure. This is an important risk factor reported in different studies (Lim-bon-siong, 2005., Lu, 2009., Lu, 2007., Mackenzie, 1992). It was reported by Chen et al that the prevalence of pterygium is higher in rural areas as compared to urban cities (Mahar, 2013).

In this study, there are more patients reported to have outdoor jobs. This was consistent with the study done by okayTaiwo et al. wherein he stated that outdoor occupation is an independent risk factor for the development of pterygium. 18 Pterygium type 3 was seen to be higher among patients working outdoors. This similar to the study done by Donald Tan stating that patients who had outdoor jobs had fleshier and more advanced type of pterygium (Liu, 2013). We also noted that an increase in corneal involvement or a higher grade of pterygium was also more common among this group of patients.

The most common chief complaint was the appearance of a fleshy mass (91%). Cosmetic concern was the leading indication for its surgery, and thus the procedure, which gives the best cosmetic outcome and least recurrence, must be done for patients. The most common treatment plan recommended for these patients was excision with conjunctival autograft (59%). This was the procedure that gives the best cosmetic outcome and least recurrence as shown in many studies (Marmamula, 2013., Mutlu, 1999., Nemet, 2014., okayTaiwo, 2014., Philippine General Hospital, 2015., Sánchez-Thorin, 1998). However, there was no definite protocol on what procedure would be best for patients based on pterygium type and grade since conjunctival autograft is a more extensive procedure and can also cause rare complications such as subconjunctival fibrosis at the harvest site which may lead to constricted extra ocular movement with resultant diplopia (Saw, 1999). None of the patients reviewed in this study was advised excision with amniotic membrane transplantation. This procedure was repeatedly reported to have good cosmetic outcome with minimal recurrence (Marmamula, 2013., Tan, 1997., Taylor, 2006., Threlfall, 1999., Vrabec, 1993., Wong, 2001). Thus, it must also be included in our options for the management of our patients.

Being a single-centered study in a tertiary referral hospital, selection bias was observed in the study population. It is recommended that a similar study also be done in primary institutions for better representation of the epidemiology of pterygium patients in the general population.

With approximately 10,000 new ophthalmologic consult per year, the Department of Ophthalmology and Visual Sciences of the Philippine General Hospital has a rich pool of patients and data for research. It should be reiterated to all residents and doctors the importance of having a complete chart. Public health education organized to stress on the importance of UV protection especially among high-risk groups can be a very cost effective way of preventing pterygium occurrence.

An organized protocol on management of pterygium cases depending on its type, grade, patient’s age and risk factors will be very beneficial to guide ophthalmologists on treatment plan to prevent recurrence and at the same time limit the cost, surgical time and need for extensive surgery.

This study was conducted after it has been approved by the University of the Philippines, Manila Research Ethics Board (UPMREB). All patient information gathered during the course of this study was kept anonymous and confidential, and was only reported as part of group data. There was no conflict of interest in any form for this study. All the expenses that arose in this research endeavor were shouldered by the principal investigator, and no additional expenses were be incurred by the participants at any time during the study.