Mucosa Associated Lymphoid Tissue (MALT) lymphoma, accounting for about 5% of non-Hodgkin’s lymphoma, arises in a number of epithelial tissues, mostly in the gastrointestinal tract, respiratory tract, ocular adnexa, thyroid and salivary glands. MALT lymphoma primarily arising from the kidney is extremely rare. Here we report a case that was admitted to our institution due to left hydronephrosis and was finally diagnosed as primary renal mucosa-associated lymphoid tissue lymphoma. The patient was treated by radical nephrectomy and postoperative chemotherapy.

Extra-nodal marginal zone B cell lymphoma, also named as Mucosa Associated Lymphoid Tissue (MALT) lymphoma, which accounts for about 5% of non-Hodgkin’s lymphoma, arises in a number of epithelial tissues, mostly in the gastrointestinal tract, respiratory tract, ocular adnexa, thyroid and salivary glands [1-3]. MALT lymphomas first reported by Pelsdving in 1991, defined as lymphoma arising primarily in the renal parenchyma are extremely rare [4]. As previously reported, primary renal lymphoma usually presents at age 40, with clinical manifestations including flank pain, hematuria, weakness, weight loss, abdominal mass or renal failure. Here, we report a case that was admitted to our institution due to left hydronephrosis and was finally diagnosed as primary renal MALT lymphoma by pathological examination. The patient was treated by radical nephrectomy and postoperative chemotherapy.

Informed consent was obtained from the subject after approval of the experiment (Revised January 2008). A 60-year-old male was admitted to our institution because left hydronephrosis was incidentally detected by ultrasonography during his hospital admission for coronary disease 5 month before. There was no complaining of flank pain, hematuria, urinary frequency and urinary pain. His medical history was unremarkable except for acute coronary syndrome treated by percutaneous coronary intervention. Physical examination didn’t find out any abnormal signs, such as palpable abdominal masses, appreciable lymphadenopathy and hepatosplenomegaly. The routine blood test, liver and renal function was all within normal limits. The urine cytological examination result was negative. Enhanced computed tomography scan revealed a hypodense lesion in the renal parenchyma of left kidney with infiltration to renal pelvis and proximal portion of ipsilateral ureter (Figure 1). 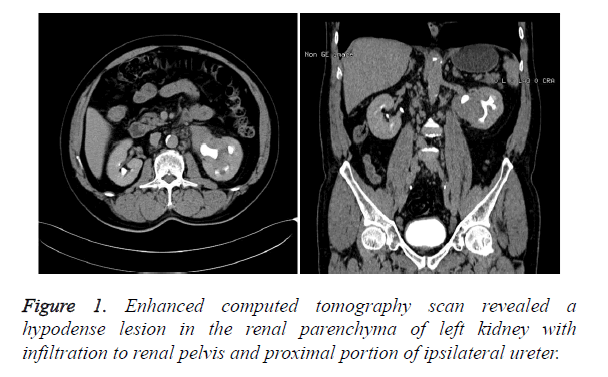 Suspecting a left renal cancer with invasion of the collection system, we performed a laparoscopic radical nephrectomy. Regional lymphadenopathy was noted during operation, and regional lymphadenectomy was also performed. 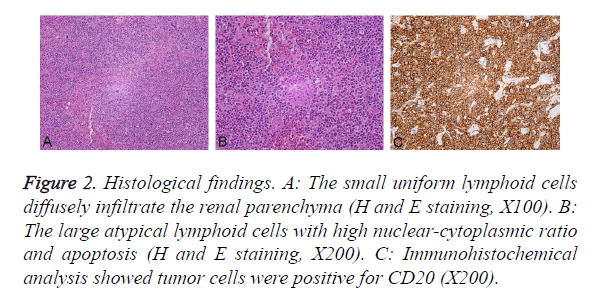 MALT lymphoma arises in a number of epithelial tissues and the cause is thought to involve pre-existing chronic stimulation of the immune system by reactive B-cell lymphoid tissue. MALT lymphomas derived from the gastric, salivary glands and thyroid glands are commonly associated with Helicobacter pylori infection, Sjogren’s syndrome, and chronic thyroiditis, respectively [5-7]. However, MALT lymphoma primarily arising from the kidney is extremely rare.

The preoperative diagnosis of MALT lymphoma of the kidney is challenging, because there are no specific clinical characteristics for the diagnosis. Ultrasound, CT or MRI examinations are also no specific for the diagnosis [8]. The diagnosis of MALT lymphoma is usually made based on morphology, immunophenotype and genetic analysis. The morphology of MALT lymphoma is characterized with monocytoid B cells, small lymphocytes with abundant cytoplasm and lymphoepithelial lesions. Immunophenotype was positive for CD19, CD20, and CD22 and negative for CD5, CD10, and CD23 [9]. Furthermore, it is essential to distinguish MALT lymphomas from other malignancies, such as renal cell carcinoma, angiomyolipoma, oncocytoma, renal pelvic urothelial carcinoma and lymphoma of other types [10]. Although CT-guided percutaneous renal tumor biopsy may helpful, in most cases, diagnosis is made after radical nephrectomy for the suspected renal cell carcinoma [11]. In this case, biopsy was not performed because the patient had hydronephrosis (an urothelial carcinoma is also suspected).

MALT lymphomas can be treated with chemotherapy, surgical intervention or radiotherapy [11], but the management of MALT lymphoma arising from the kidney has not been established. Although MALT lymphoma had a striking tendency to be localized and might be cured with local therapy, we performed the E-CHOP regime postoperatively after considering the age of our patient. The 5-year overall survival of MALT lymphoma with different anatomical origins ranged from 69.1% to 87.9%, while the lymphoma-related death ranged from 4.5% to 17.3% [1].

Our case suggests that primary MALT lymphoma can occur in the kidney and should be included in the differential diagnosis of a solitary renal mass. However, the accurate prognosis of patients with MALT lymphoma arising from the kidney is unknown, so we have to give a closely surveillance. Although data of patient survival is limited, preservation of renal function should be an important concern in these patients.