This study was undertaken with the to determine the attitude and perception of primary health care physicians in Jeddah, Ministry of Health, Kingdom of Saudi Arabia, towards evidence based medicine and their related educational needs. One hundred seventy selfadministered questionnaires were distributed to all Primary health care centre physicians from 1 July to 30 July 2010. One hundred twenty-eight completed the questionnaires, a response rate of 75.3%. Respondents welcomed evidence based medicine and agreed that its practice will improve patient care. They had a low level of awareness of extracting information from journals, review publications and databases. The majority of unqualified physicians, 100 (78%), were unaware of the Cochrane Database of SystematicReviews. The major barrier to practicing evidence-based medicine was lack of time, 83(64.8%). Fifty four (42.9%) physicians approved using evidence based practice guidelines or protocols developed by colleagues. Despite the physicians having positive attitude towards evidence based medicine, their level of knowledge and skills are still below average. Accordingly, there is a need to start training courses and providing them with the required. Physicians who are board qualified should be encouraged to teach evidence based medicine skills to their non board qualified colleagues and develop local evidence based guidelines.

Evidence-based medicine (EBM) is a double mix of research evidence with clinical skills used in patient’s management. Clinically relevant research which is mostly patient centered deals with the efficacy and safety of therapeutic, preventive and rehabilitative regimens and the precisions of diagnostic test. The previously used diagnostic tests and treatments are replaced by the new ones which are evidence based [1].

To deliver the high level and high quality patient care, the knowledge of the tools of evidence based practice is required. Clinicians need to be equipped with good communication skills and with the knowledge of humanities and social sciences. These qualities of physician will help them to understand, the patients illness, their values and preferences and to manage their patients [2].

Evidence based medicine has created the awareness of the management choices for many diseases/disorders, but still the daily practices does not show its impact [3,4]. Many evidences where implemented and actions/solutions were recommended [5,6].

General practitioners have been using the evidence based models [7] with utmost care. The commonest reason as revealed in a study was their reluctance in dealing with the patients [8].

It has been reported in many studies that family physician’s have positive attitude [9-11] towards evidence based medicine and a firm belief that it improves patient care. A study conducted by Al- Ansary et al [12], revealed that main outcome measures were physician’s attitude towards EBM, perceived barriers and the best method of changing their opinion from the old style practice to the evidence based medicine.

The aim of the study was to assess the primary health care physician’s perception, attitude and educational needs towards evidence based medicine.

The questionnaire used in English, contained 25 items and four sections, where it had recorded the information demographic data such as age, gender, nationality, specialty, name of the University from where graduation was done, number of years of practice and previous EBM Education if any. Main outcome measures were respondents’ attitude towards evidence basedmedicine, ability to access and interpret evidence, perceived barriers to practicing evidence based medicine and the best method of moving from opinion-based medicine to evidence based medicine.

Questionnaires were distributed to all PHCC physicians working in Jeddah city from 1 July to 30 July 2010. Hundred twenty-eight responded, a response rate of 75.3%. To test the differences in subgroups, student t-test was used for quantitative variables and chi-square was used for qualitative variables. Written permission from the Research Committee in South Eastern Region to conduct the research was obtained. Questionnaires were given to the physicians with a covering letter indicating confidentiality and anonymity.

The physician’s who had a favourable and positive attitude accounted for a mean score of more than 64 (50%), representing 85.9% of the study sample. The current promotion of EBM was also favorably opined by 78.9%, which was significantly higher among board qualified physician 117 (91.37%) as compared to those who did not had the board qualification 97 (74.79%; p<0.05). 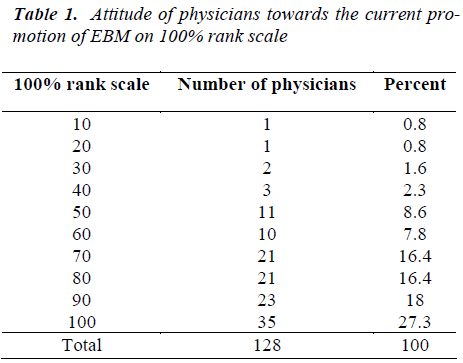 Table 1: Attitude of physicians towards the current promotion of EBM on 100% rank scale

Regarding the opinion on barriers in practicing EBM, two–thirds of the physician’s 83(64.8%) considered the lack of time as the major barrier, followed by non availability of journals or guidelines by 66 (51.6%) physician’s, unavailability of the facility like internet by 64 (50%) physician’s and computer by 56 (43.8%) physician’s. The least observed barrier to the practice of EBM was reported by 12 (9.4%) physicians.

Table 3: Training of physicians on topics related to EBM according to Board qualification 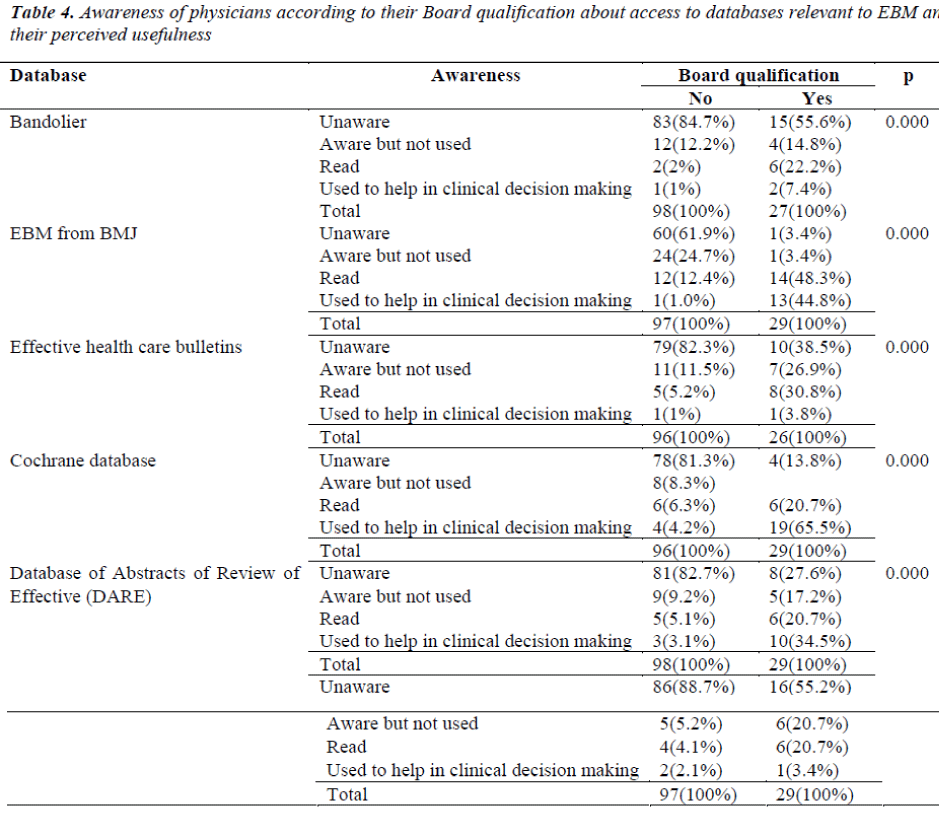 Table 4: Awareness of physicians according to their Board qualification about access to databases relevant to EBM and their perceived usefulness 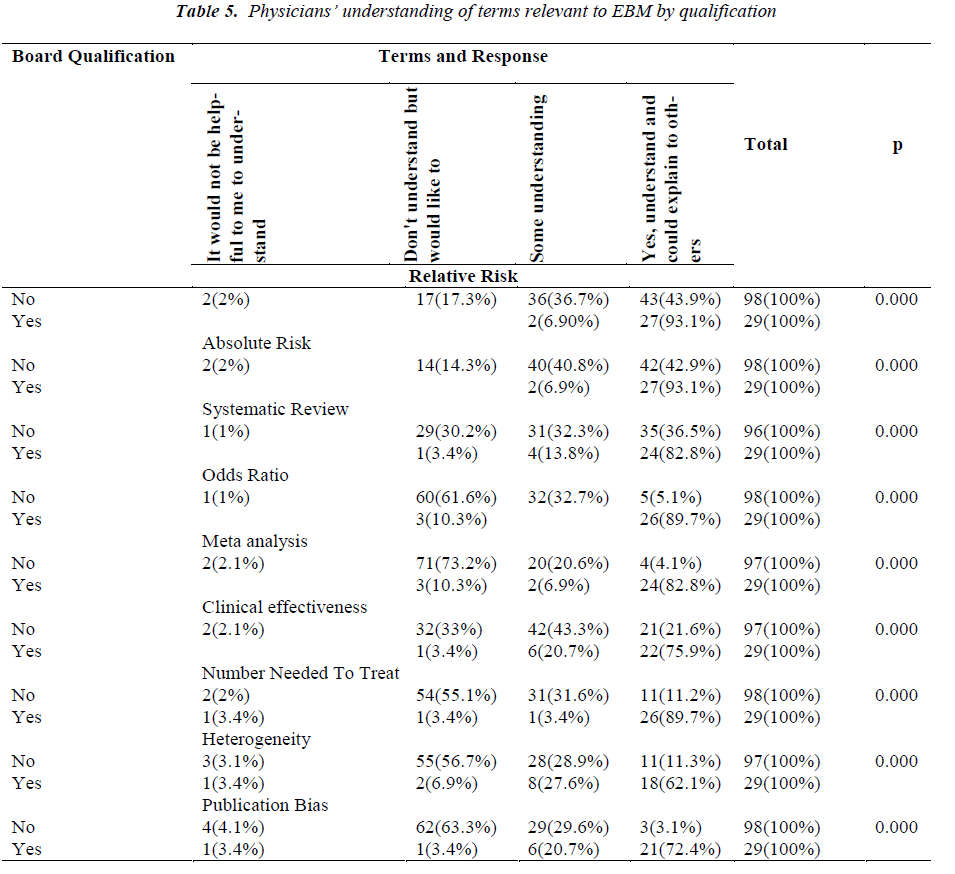 Table 5: Physicians’ understanding of terms relevant to EBM by qualification

In the present study the favourable attitude of physician’s was quite similar to that reported by other author’s [9,10,12]. Most of the respondents agreed that practicing evidence based medicine improved patient care. The median value for the evidence based clinical practise was found to be 55.86% for board qualified physician’s and 51.12% for non-board qualified physician’s in Jeddah as compared to a study in Riyadh, Kingdom of Saudi Arabia [12] 68%, and in a study amongst physician in Britain 50%. However, the Jeddah study was a self reported questionnaire based having its own limitations.

In general practise, there are many clinical evidences in primary health care which have been found out, information extracted from journals and internet and used for the betterment of the patients [13,14].

According to Young and his group who concluded that although Australian general practitioners' self ratings of understanding of terms used in evidence based medicine were modest their verbal explanations almost never met the essential criteria. Moreover, participants' comments showed considerable misunderstanding about these terms [15]. The same conclusion can be applied to our respondents whose responses were similar to that of Saudi Arabia (Riyadh region) [12] and United Kingdome [9], it showed a partial understanding of some technical terms used in evidence based medicine, but it was very clear that doctors who had a board qualification in family medicine or post graduate training in public health or they had attended evidence-based medicine course feel more confident in understanding as well as in explaining these terms to others. They can work as a trainer in a small workshop at the level of the primary health care centers to teach other physicians about basic skills in evidence based medicine.

Lack of personal time was reported to be the main perceived barrier. The lack of facility such as computers and internet access in the clinics of the doctors were other barriers. Similar observation were reported by other author’s [16,17].

Primary Health Care administration should refocus their efforts on promoting and improving access to summaries of evidence. They should also encourage local primary health care physicians working in localities or commissioning groups, who are themselves skilled in accessing and interpreting evidence, to develop local evidence based guidelines and advice. Together with teaching primary health care physicians’ skills in search and critical appraisal, will improve their clinical practice.

We would like to thank all primary health care physicians working in Jeddah Primary Health Care Centers, Ministry of Health, Kingdom of Saudi Arabia, who took part in this survey. Also, our appreciation to Dr. Ashraf Amir, Primary Health Care Directorate who helped in distributing and collecting the questionnaires.