Primary cutaneous actinomycosis of the lower extremity: A clinical dilemma.

Actinomycosis is an indolent suppurative and granulomatous infection caused by anaerobic or microaerophilic bacteria, primarily of the genus Actinomyces that normally colonize the mouth, colon, and vagina. It is characterised by contiguous spread, formation of multiple abscesses, discharging sinuses draining sero-sanguinous fluid and sulphur granules followed by fibrous tissue formation. It typically involves the head and neck, thorax, abdomen and pelvic region of the body. Primary cutaneous actinomycosis of the lower extremity is a rare event to occur and can be easily misdiagnosed clinically. A high index of suspicion, clinical and histopathological examination as well as isolation and culture of the organism is required for its definite diagnosis. We herein describe a rare case of a 55- year-old Indian woman who had primary cutaneous actinomycosis of the right lower leg and foot which posed a diagnostic as well as therapeutic challenge.

Actinomycosis is a rare sub-acute or chronic suppurative and granulomatous bacterial infection caused by facultative pathogenic commensals belonging to Actinobacteria class. The most commonly encountered organisms in the humans are Actinomyces israelii (A. israelii) and A. gerencseriae. Nevertheless, human infections due to less common species like A. bovis, A. naeslundi, A. odontolyticus, A. meyeri, A. turicensis and A. viscosus have also been documented [1,2]. This infection tends to develop at cervicofacial, thoracic, abdomino-pelvic regions of the body because of the exclusively endogenous habitat of these bacteria [3] and it typically spreads contiguously. However, hematogenous and rarely lymphatic dissemination to distant organs can occur at any stage of this infection [4]. Involvement of other body parts like central nervous system, bones, joints, muscle tissues and skin is uncommon and is usually secondary to a lesion in one or the other of the above common sites [5-7]. Primary cutaneous actinomycosis of an extremity is extremely rare and is generally associated with direct implantation of the organism on the exposed skin after trauma. We present here a case of cutaneous actinomycosis of the right lower extremity without any detectable extra-cutaneous lesions in a 55-year-old Indian woman which created a diagnostic conundrum for the treating physicians.

A 55-year-old female from a rural area of Mewat district, Southern Haryana, India presented with multiple wounds over the right leg and dorsum of the right foot since last two years (Figure 1a). These wounds had started as a solitary reddish nodule that with time had gradually multiplied and started discharging pus and bloody discharge. She was a house-wife but sometimes used to work in the fields barefoot for harvesting. She also gave history that whenever she had any wound on her body she had a tendency of applying her saliva on it. There was history of loss of appetite and weight. There was no history of any fever, cough, chest pain, trauma or insect/ animal bite. Her past and family history was non-contributory. Her medical history revealed that she had been previously treated for these wounds at a center with extended courses of oral antibiotics followed by anti-tubercular therapy, which she took for a period of four months and stopped it on her own because of non-resolution of the symptoms. She was postmenopausal since last eight years and had no past history of intra-uterine contraceptive device insertion. On physical examination, pallor was observed. Local examination of the right leg and dorsum of the right foot exhibited irregularly shaped, scarred as well as indurated plaques and nodular swellings with multiple partially healed up sinuses which were not adherent to the underlying bone and were non- discharging. Hammer toe deformity of the little toe was noted (Figure 1b). Her neurovascular status of the foot was normal. There were no other lesions elsewhere on the body. No regional lymphadenopathy was present. Rest of the physical as well as systemic examination was within normal limits. Based on the history and the clinical findings, a differential diagnosis of deep fungal infection and mycetoma/madura foot were kept. However, due to the endemicity of tuberculosis in this region of Mewat, a possibility of tuberculosis was also considered. 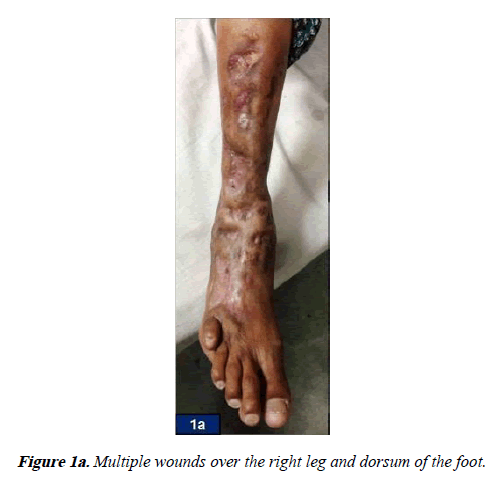 Figure 1a: Multiple wounds over the right leg and dorsum of the foot. 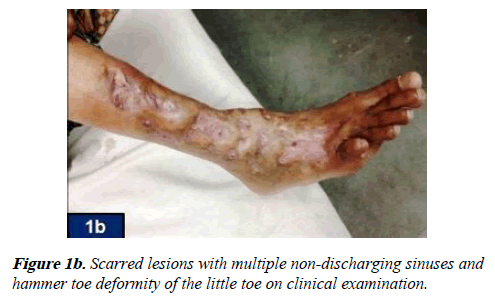 Figure 1b: Scarred lesions with multiple non-discharging sinuses and hammer toe deformity of the little toe on clinical examination.

Her laboratory investigations revealed microcytic hypochromic anemia with hemoglobin level of 10.2 gm/dl (MCV-70.6 fl), the peripheral blood leukocyte count was 13,000/ml with differential being of 80% neutrophils, the platelet count was 4,10,000/μl, the erythrocyte sedimentation rate was 60 cumm/hr and the c-reactive protein was 86 mg/l. Blood sugar, renal and liver function tests and urine as well as blood cultures were negative. Serological tests for hepatitis B and C antigen, human immunodeficiency virus was non-contributory. Montoux’s test was negative. Other investigations like radiological evaluation of chest, spine, abdomen, pelvis was within normal limits. X-ray of the right leg and foot showed numerous soft tissue lesions without any involvement of the underlying bones. A deep tissue biopsy from these lesions was taken and sent for histopathological examination as well as microbiological culture. Microscopic haematoxylin and eosin stained sections showed hyperkeratosis and acanthosis of the epidermis of the skin. The dermis revealed bacterial colonies of actinomycetes surrounded by acute inflammatory infiltrate comprising predominantly of neutrophils (Figure 2). Gram staining and Periodic acid-Schiff staining also showed actinomycotic colonies while staining for acid fast bacilli was negative, hence confirming the diagnosis of actinomycosis. 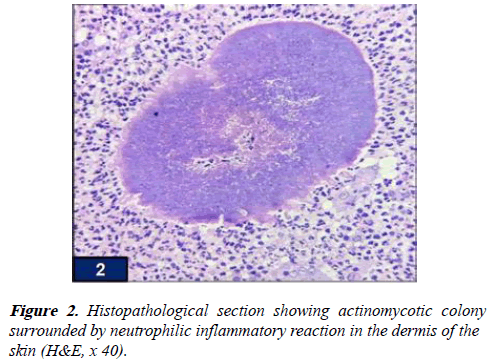 Microbiological culture of the biopsy specimen revealed colonies of A. israelii while culture for mycobacterium tuberculosis and fungi was negative. Based on the clinical, histopathological and culture findings, a final diagnosis of primary cutaneous actinomycosis of the right lower extremity was made.

The patient was put on antibiotic Penicillin G – 24 million U/d intravenous by continuous infusion for 6 weeks followed by oral penicillin V for another 6 weeks. She showed some signs of improvement at the end of 3 months of the therapy in the form of flattening and regression of the induration of the lesions. The patient has been continued on this regimen for a year now and is on regular follow-up. Presently, her lesions have completely healed and there are no recurrences.

Actinomycosis has been called “the most misdiagnosed disease” and listed as a ‘rare disease’ by the Office of Rare Diseases (ORD) of the National Institutes of Health (NIH) [8]. The exact incidence estimation of actinomycosis infection is difficult, however due to the widespread use of antibiotics and improved dental hygiene, its incidence has declined tremendously [9]. It is a bacterial infection caused by species of Actinomyces genus which belong to a group of opportunistic otherwise harmless commensals of the oral cavity, lower gastrointestinal tract and female genital tract. This pathogen is usually accompanied by one or more of another group of copathogens like Actinobacillus actinomycetes comitans, followed by Peptostreptococcus, Prevotella, Fusobacterium, Bacteroides, Staphylococcus, and Streptococcus species, and Enterobacteriaceae, depending on the location of actinomycotic lesions. These companion bacteria appear to magnify the low pathogenic potential of actinomycetes by elaborating a toxin or enzyme or by inhibiting host defenses [10]. It can affect people of all ages and virtually any part of the body. Cervicofacial, thoracic, abdomino-pelvic areas are most commonly involved by this infection. Primary cutaneous form is the least common variety [11,12]. Amongst the sites of cutaneous involvement by this infection, lower extremity is the rarest site to be affected [13,14]. In our case, there were no detectable extra-cutaneous lesions, suggesting that the actinomycosis of the right leg and dorsum of the right foot developed primarily in the skin.

Numerous risk factors have been implicated for acquiring this infection like poor oral hygiene with dental decay, primary infections including pharyngitis, otitis media, urinary tract infections, pneumonia, cholecystitis, urinary tract infections, cholecystitis and dental caries, malnutrition, impaired immunity due to immunosuppressive drugs, chronic conditions such as diabetes and local tissue damage caused by trauma, insect/animal bite, recent surgery or irradiation. Other important factors are middle-aged age group people especially men, inhabitants of tropical countries, occupation such as of agricultural workers, people who walk barefoot, environmental factors like soil, rainfall, thorny vegetations [5,15,16]. Our patient did not recall any trauma and her past surgical history was non-contributory. However, there were numerous risk factors associated with the development of such lesions at her right lower extremity such as she lived in a rural area of a highly endemic tropical region with dry, dusty environment and thorny vegetations all around. She used to walk and work in fields barefoot. She also had a habit of applying her saliva on her body wounds. All these factors might have led to minor trauma to her skin of this region leading to inoculation of the organism into the skin through her saliva.

Once the infection is established, the host mounts an intense inflammatory response (i.e., suppurative, granulomatous), and fibrosis may develop subsequently. Infection typically spreads by ignoring the tissue planes and invades the surrounding tissues. Ultimately, it produces draining sinus tracts. Hence, this infection can present as a soft tissue mass enlarging into an abscess like swelling, with penetration of the overlying skin and as multiple draining sinuses which may be healed. Usually, there is a significant delay between the initial appearance of the skin lesions and the subsequent diagnosis [17]. Therefore, its diagnosis requires a high index of suspicion as cutaneous actinomycosis can mimic other nodular skin lesions that tend to form sinuses such as mycetoma (eumycetoma/ actinomycetoma/botryomycosis), cutaneous tuberculosis and sporotrichosis [18-20].

The management of actinomycosis cases includes clinical examination, histopathology, isolation and culture of the organism. It is difficult to diagnose it on the basis of clinical features, however histopathology is quite diagnostic but it is the direct identification or isolation of the infecting organism from a clinical specimen (draining sinuses, deep needle aspirate, or biopsy specimens) with demonstration of sulfur granules which is definite for its diagnosis [5,7,15,21]. In our case the diagnosis was made on histopathology and confirmed on culture. However, the failure rate of isolation is quite high and culture confirmation is not achieved in most of the cases [22,23]. Other diagnostic modalities like radiology (X-ray/CT and MRI scans) and serological assays are helpful; however these are not very sensitive. Molecular methods such as polymerase chain reaction, rRNA sequencing, fluorescence in situ hybridization and mass spectroscopy, are now available for a more rapid and accurate identification in research laboratories [1,18].

The treatment of cutaneous actinomycosis of lower extremity is primarily based on antimicrobial therapy. Drug of choice is Penicillin G. High-dose Penicillin G – 12–24 million U/d intravenous by continuous infusion or in divided doses is given followed by oral amoxicillin, ampicillin, or penicillin V which is administered over a prolonged period (6 months to 1 year). Alternative to penicillins, if the patient is hypersensitive to penicillin or the causative organisms are resistant to penicillin, are Ceftriaxone, Imipenem/Cilastin, Clindamycin, Amoxycillin/Clavulanic acid, Doxycycline, Tetracycline, Lincomycin and Macrolides (erythromycin, Carbomycin, Spiramycin and Oleandomycin). Surgery is indicated mainly for taking a biopsy specimen, to drain abscesses, to extirpate a fibrotic sinus tract or a refractory fistulous tract which are not responding to the conservative medical treatment [1,7,24]. The follow-up should be adequate and meticulous to have a complete cure of the disease as the prognosis is usually excellent, especially when it is diagnosed early and treated with appropriate antibiotic therapy [25].

Primary cutaneous actinomycosis of the lower extremity is an uncommon clinical entity which often remains undiagnosed as it masquerades diseases like tuberculosis, mycetoma and deep fungal infections. A collaboration of clinical features, histopathology and culture isolation of the organism is required in such cases to make an accurate diagnosis and for timely intervention with appropriate medical therapy. 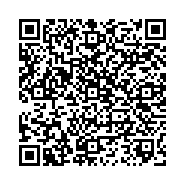