The objective of the present work is to assess the ability of primary care physicians to apply correctly the recent hyperlipidemia management guidelines. A cross – sectional study of primary care physicians working in the family medicine department affiliated with a tertiary hospital. Using 63 patient problem vignettes, which included lipid biochemistry, and a number of cardiovascular risk factors, each physician was asked, if a patient required no treatment, dietary or drug treatment. The vignette cases were matched against the NCEP ATPII guidelines. Forty-five physicians were recruited in this study. The Kappa statistics showed only two (4.4%) had excellent agreement, nine (20%) fair to good agreement while the remaining thirty-four (75.6%) of the physicians had poor agreement. The median Kappa statistics of 0.3 and a mean of 0.33 (SD = 0.18) suggested an overall poor agreement. Overall, the decisions to treat with medications were more consistent with the NCEP guidelines than diet alone or no treatment decisions. Saudi and younger physicians had statistically significant (P < 0.05) higher Kappa statistics than older (> 35 years) and Non – Saudi physicians. About one third of the physicians were not consistent with guidelines rec-ommended by the NCEP-ATPII. The majority of the expatriate doctors are not following the NCEP which is evidence based and the most widely accepted guideline. Therefore, it is suggested that only one guideline to be adopted as a standard, and doctors must undergo adequate training and continuous evaluation of their skills.

Hyperlipidemia is a statistical definition of increased plasma cholesterol, triglycerides (TG), and phospholipids based on the 95th percentile [1].

Clinical hyperlipidemia is ill defined and to cope with this, many guidelines have been published [2]. In 1993, the National Chole-sterol Education Programs Adult Treatment Panel II (NCEP-ATPII) were issued [3]. In 2001 the NCEP-ATPIII were published.Recent clinical trial data mostly support the NCEP which is evidence based guidelines and perhaps the most widely accepted and the most specific for no treatment, diet or drug treatment based on clinical cut points that indicate relative risk for CHD [3,4].

There has not been a truly national study of hypercholes-terolemia in Saudi Arabia. However, individual researchers have reported varied levels of the prevalence of this condition. Al- Nuaim et al [6]. reported that, the prevalence of high total cholesterol (>5.2 mmol/l) was 16 % and 19 % for male and female, respectively in population over 15 years old. The authors attributed this relative low prevalence to the young status of the Saudi population, with 60% under 30 years old, 47 % less than 15 years and only four percent being 65 years or more [7]. In a study, by EL-Hazmi et al [8] found that over 9% of Saudi chil-dren below 15 years old and over 10% of those between 3-14 years of age had hyperlipidemia.

The Kingdom of Saudi Arabia adopted the primary health care approach to achieve health for all citizens. Therefore, most pa-tients have direct access to primary health care services. Studies have revealed high utilization of these public health services in both urban and rural areas [9].

In view of the increasing risk factors of CVD (hypertension, diabetes, smoking, obesity and, lack of exercise) in the Saudi Arabian community [10,11,12], the need of this skill of hyperlipide-mia management has become an essential tool.

It is therefore important that physicians in the primary care centers are aware of the best approach in the management of patients with hyperlipidemia. Despite the rapid increase in awareness and importance of hyperlipidemia, to the best of the researcher’s knowledge, no studies have been carried out regard-ing the quality of hyperlipidemia management in Saudi Arabia.

Therefore, the aim of this study is to assess the ability of primary care physicians in the application of recent guidelines in the management of hyperlipidemia as recommended by the NCEP-ATPII guidelines.

This is a cross-sectional study of primary care physicians, working in a family medicine department, affiliated to a tertiary hospital, over a period of one month.

The study population included all the primary care physicians who were working in the Department of Family Medicine, King Fahad National Guard Hospital(KFNGH), Riyadh, during August 2000. Only physicians, who were on holidays or temporarily transferred from the department for the whole month of August, were excluded from the study.

A structured questionnaire containing the demographic and pro-fessional characteristics of the primary care physicians was designed for data collection. To maintain confidentiality, an identification number was allocated to each physician.

Using 63 patient vignettes; each was designed to contain some demographic data, medical history, a number of cardiovascular risk factors and lipid profile for a patient (Figure 1). The vignettes were designed based on values of LDL (mmol/L) (Table 1). 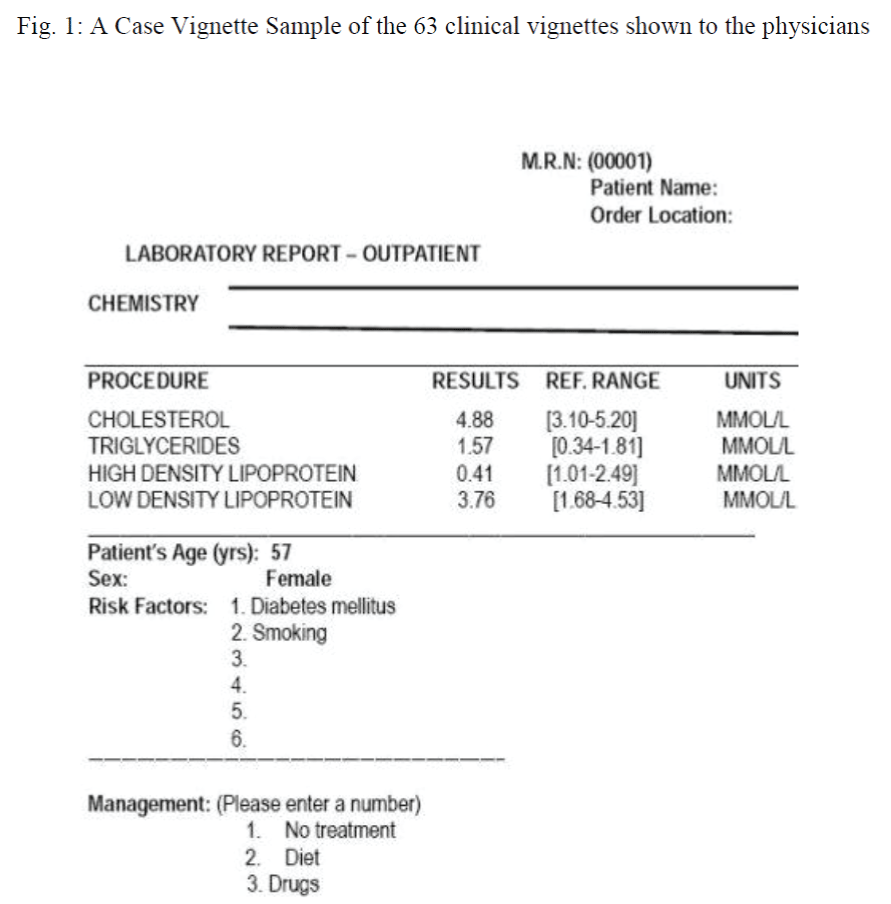 Figure 1: A Case Vignette Sample of the 63 clinical vignettes shown to the physicians 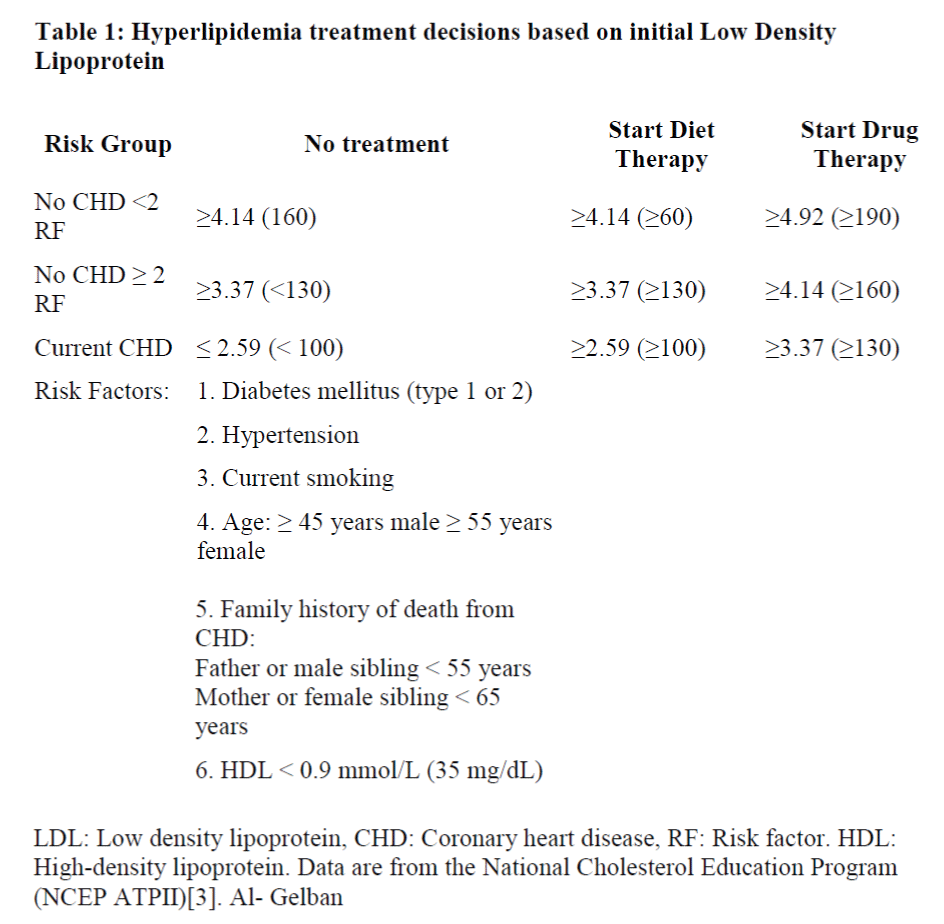 Each physician was asked if a patient needed no treatment, dietary, or drug treatment on viewing each of the 63 patient vignettes. The researcher then matched the patient vignettes against the ATPII guidelines and the number of agreement and disagreement were recorded.

The data collected, and electronically coded into a computer using the SPSS software package [13].

The agreement with the NCEP guidelines was assessed on the rating of the 63 vignettes by each physician using Kappa statistics which was defined as the proportion of agreement in excess of chance [14].

The mathematical expression for Kappa is

The used interpretations of k value are as follows:

Appropriate statistical tests were used and carried out at the 5% level of probability significance.

A total of 45 primary care physicians were recruited to partici-pate in this study. Table 2 shows the characteristics of the phy-sicians. All the physicians were of middle age with a mean of 39.5 years (SD±7.1 years). More than half of the physicians had been in general medical practice for over 15 years since gradua-tion. The Saudis, 11 (24.4%) were in minority and six (55 %) of them had their specialist qualifications awarded by the Arab/Saudi or equivalent Board Certification in Family Medicine. The male to female ratio was 2.75:1 and the males had higher proportions than females in postgraduate qualifications. 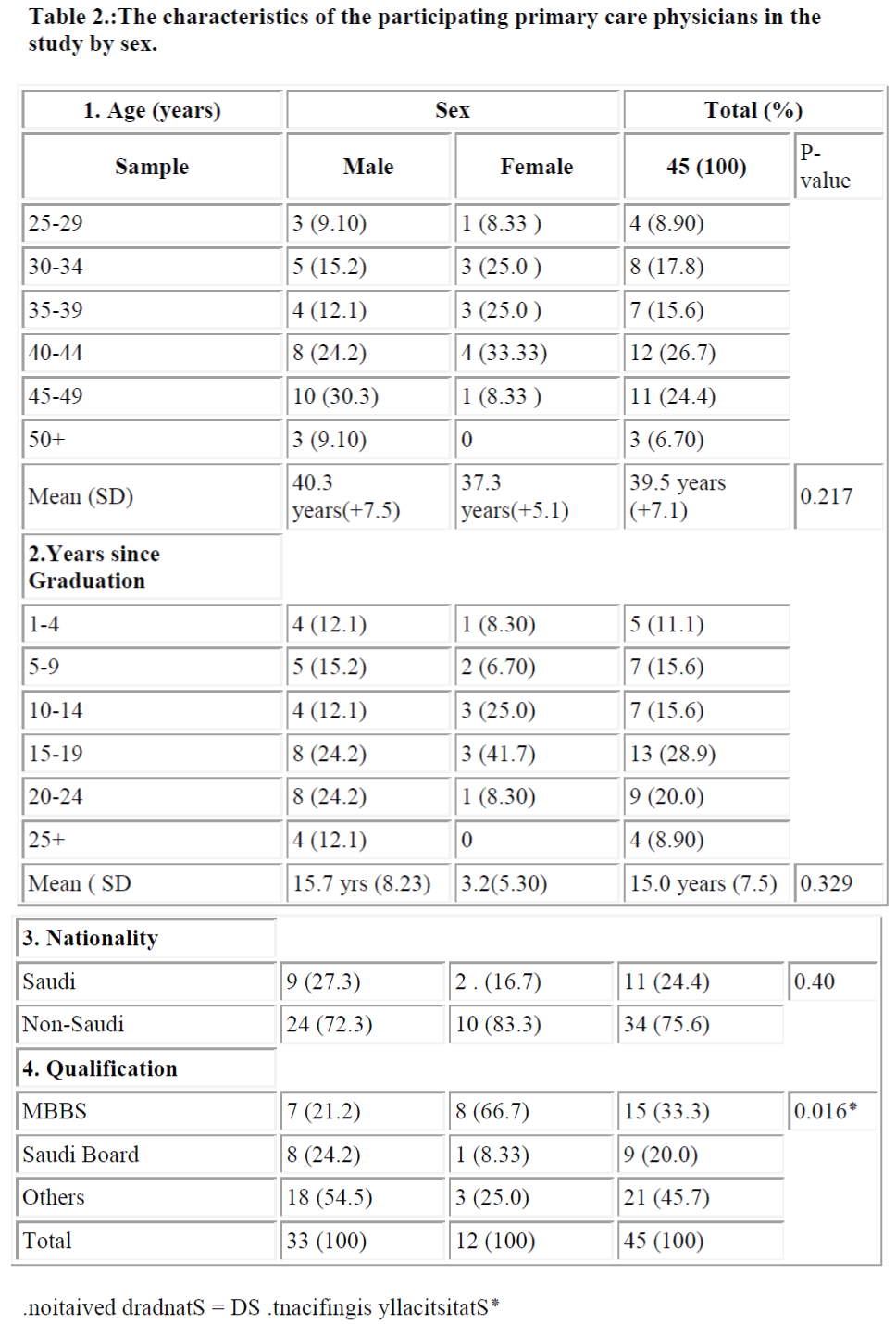 Table 2: The characteristics of the participating primary care physicians in the study by sex.

The Kappa statistics for the overall agreement presented in Panel 3 (Table 3) was statistically significant among the physicians less than 35 years old (P < 0.05). 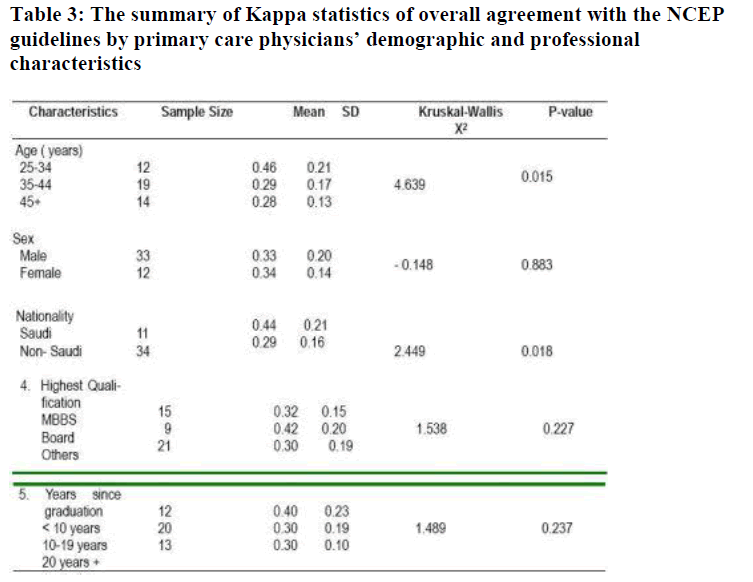 Table 3: The summary of Kappa statistics of overall agreement with the NCEP guidelines by primary care physicians’ demographic and professional characteristics

The agreement beyond chance indicated by the Kappa statistics in Table 3 showed the Saudis to be at an advantage (P < 0.05). However, the nine physicians with Saudi Board equivalent certification seemed to have a better agreement than either those with only MBBS degrees or with other medical qualifications. Physicians with less than 10 years since graduation had a better overall agreement with the NCEP guidelines 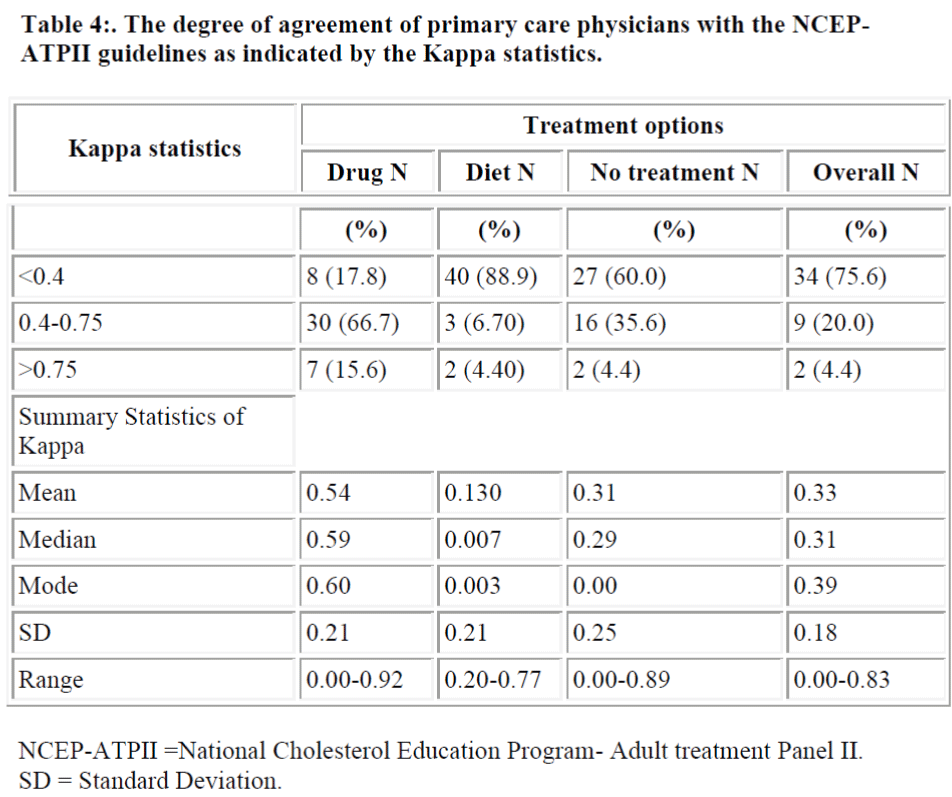 Table 4: The degree of agreement of primary care physicians with the NCEP-ATPII guidelines as indicated by the Kappa statistics.

The Kappa statistics for the assessment of agreement beyond chance in drug therapy also presented in Panel 2 of Table 4 had a mean of 0.54 (SD = 0.21) and median 0.59.

The agreement of physicians with this aspect of the NCEP guidelines can be described as fair to good.

The Kappa statistics to assess the agreement beyond chance in “no treatment” decision (panel 4 of table 4) gave a mean of 0.31, (SD ± 0.25) and a median of 0.29. This pattern of agreement appears similar to the overall agreement.

A considerable attention has been focused recently promoting evidence-based medical practice and potential of guidelines to support appropriate care and changes in clinical behaviour.4 Both the development of guidelines for the management of hyperlipidemia and the manner in which they are subsequently used may relate to move than just clinical outcomes. They may also reflect implicity or explicity differing views and values relating to acceptable economic cost of these clinical benefits that might be achieved by intervening at specific lipid levels [15].

Guidelines have been shown to change clinical practice and to improve patient outcome [16]. However, more guidelines are written than are implemented [5]. The findings in this study indi- cate that the majority of primary care physicians are not follow-ing the NCEP guidelines in the management of hyperlipidemia.

Unlike the majority of previous studies that used chart review [18,19], vignettes were used in this study. This had the advan-tage that the possibility of restrictions on prescription of lipid modifying agents by general practitioners was minimized, and the exact vignette cases were seen by different physicians. The study had limitations like the study situation which might have led the physicians to pay more attention to the management of hyperlipidemia than usual. Secondly, knowing that these were not real patients, the physicians might have cared less than usual. But, the fact remains that procedures would reflect the understanding of primary care physicians in management of hyperlipidemia in accordance with NCEP guidelines.

Overall, only a quarter of the clinicians had adequate agreement with the NCEP guidelines. The overall decisions to treat with drug and diet were more consistent than either diet alone or no treatment.

Recently there has been an increase in the rate of prescribing the lipid lowering drugs. However, large variations still remain between the practices [22]. Lai et al [17] found that only 13.6 % of eligible patients had drug therapy while in the present study 69.8% patients eligible for drug therapy had an agreement of physicians. But, agreement with dietary practice was poorer in this study as compared to previous studies. Schectman et al [24], studied the primary care management of hyperlipidemia in an academic primary care practice, they found that 67% of 243 eligible patients received dietary counseling, and 8% started on drug therapy. McBridge and Colleague [24] examined cholesterol screening and management by primary care physicians ac-cording to NCEP guidelines. They found that 45% were not receiving dietary counseling, and 67% were not receiving choles-terol medication.

It appears that the Saudi physicians had the privilege of being introduced to the NCEP guidelines and would therefore be more likely to have been familiar with it. This could also explain the seemingly better agreement of physicians with fewer years in practice, like the Saudis who were younger by age.

This study, brought out clearly that the physicians who gradu-ated from Saudi Arabia had a statistically significant agreement with the NCEP guidelines compared with other nationalities, which could be attributed to a wide use of American books in medical schools and post graduate programs in Saudi Arabia while non- Saudis either had an exposure to the British or European, regional or their national guidelines which had influenced their practice .

Further studies are needed to explore the barriers to implement these evidence-based and effective guidelines, to display the beliefs and attitude of primary care physicians towards hyperlipidemia treatment guidelines and to show what guidelines they follow in their daily practice.

The author would like to thank Dr. Mohd. Yunus Khan of the Department of Family and Community Medicine, College of Medicine, King Khalid University for reviewing the manuscript.