Preventive measures against initial outbreaks of COVID-19 in India: A review.

Throughout the world COVID-19 has been becomes critical pandemic which creates shutdown conditions for large part of population. In the whole world, confirmed cases and death rate are increasing in exponential way. It is creating panic environment in India also as condition of confirmed cases and suspected cases are enhancing continuously. To avoid the situation of community transmission Indian government, All India Institute of Medical Sciences (AIIMS), New Delhi, Indian Council of Medical Research (ICMR), National Institute of Virology (NIV), Pune, all states and union territories governments are working together and preventive tasks done by individual are depicted here. In this review various categories of corona viruses are described with various actions, controls and problems occurring in India. Small laziness can create the drastic situation in India also. Yoga is an ancient heath curing technique in India which plays a vital role in improving the immunity. How it works in our body it is also shown in the paper. A study on the behalf of age and gender is done from the data recorded by Indian government which concluded that maximum number positive cases are in age group between 21-40 years and male are more in number than female.

2019-nCoV is a novel coronavirus extracted from the lower respiratory tract of patients infected with cryptogenic organizing pneumonia [1]. It was named 2019-nCoV by the WHO. Coronaviruses are a large family of viruses that causes illness ranging from common cold to more severe diseases like pneumonia, MERS and SARS. Most people are vulnerable to 2019-nCoV. Novel coronavirus can affect people with low or normal immunity [2].

It is mainly transmitted via droplets, touching (including self-infection caused by contaminated hands) and short-distance transmission of respiratory aerosols of different sizes. Currently, 2019-nCoV is mainly spread via droplets. At first, this virus transferred from bat to human being which falls in specific category of bat viruses as shown below in categories of nCoV. Different surfaces persist the corona viruses for different time period. Stability of corona viruses at different surfaces is shown in (Figure 1) which helps in prevention of disease by sanitizing the things at proper time. 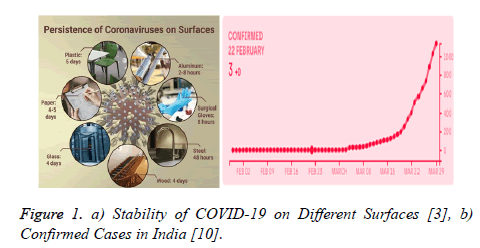 Two different groups of researchers in China reported the first bat SARS relevant CoV which was same like human SARS-CoV. They concluded that genome identity of bat SARS is 92% same to human SARS and they can enter in human body via human ACE2 with the probability of spreading another pandemic like SARS. In 2012, first case of SARS was reported in China.

After MERS disease outbreak, relevant CoV were recorded in bats. Two bat CoVs (Tylonycteris HKU4 and Pipistrellus HKU5) were first identified and assumed in group 2c CoVs in 2006 in China. These two were connected with MERS-CoV that created the 2012 pandemic. Maximum types of MERS cluster CoVs are generate by bats found in China and belong to Vespertilionidae family.

It is found generally in Rhinolophus bats in Hong Kong, Tibet, and Yunnan. This species of bats which remains in interaction with animals and human beings also give asylum to SARSs CoV. HKU2 have the different characteristics to SARSs. The swine acute diarrhea syndrome coronavirus (SARSs) was recorded as responsible agent for a big outbreak of pig’s disease in China. Till, its entry receptor in human and animal is not found. It comes in category of those viruses which can do cross-species to human beings [4].

The scientist at different laboratories of india is in touch with the things happening all over the world. Fifteen laboratories are working so far in India for testing of novel corona and nineteen are being prepared soon for the same [5-6]. To break the corona chain or to stop the community transmission central government made a special task force which is communicating with state government. Cities and villages are sanitized on regular basis.

AIIMS New Delhi publishes a report which says 80% people suffering by COVID-19 need no treatment for recovery. Less than 20% needs to be hospitalized. A very small ratio may need Intensive Care Unit (ICU). People with low immunity such as the elderly, pregnant women and patients with chronic diseases (High Blood Pressure, Heart Disease, Lung Disease or Diabetes) are prone to severe acute symptoms after contacting novel coronavirus. Fever, Sore throat, Cough and Shortness of breath are common symptoms which are similar to the symptoms of any viral infection like common cold, influenza etc. AIIMS guided the precautions to avoid COVID-19 are given as regular hand wash, maintain 1 meter distance from anyone who is coughing or sneezing etc. AIIMS’s report also said COVID-19 cannot transmit via cooked food, pets and dead body [7-8].

Due to travel history of abroad government suggested to maintain quarantine at home which is also a difficult task for peoples as school, universities are closed. Health experts says that India should start testing at large scale only then the 2nd highest population country in the world can be saved from the pandemic. Till date symptoms of COVID-19 are not clear as excluding fever, dry cough, and difficulty in breathing some more symptoms like eyes conjunctivitis, taste change are also found by health experts. A study named ‘COVID-19 for India updates ’ by Johns Hopkins University and Center for Disease Dynamics, Economics & Policy (CDDEP) a research organization in America says that if corona is not stopped to spread; 30-40 crore Indian will be infected near July [9]. The report says at the peak time of infection approximate 10 crore Indians may get infected.

From the above data it is found that from 1166 confirmed cases 182 are female and 367 are male and other’s gender is not given in the database. From confirmed cases maximum are either has been travelled to abroad or found relative, worker and employees of them. Age of confirmed cases in India lies between 1-96 years. Death rate in India is 2.4%. From the dashboard [10] given by Indian government it is found that maximum cases who are found corona positive have age between 21-40 years. As shown in table 1 age group below 20 have lesser number. In between 40-60 years and greater than 60 years number is 152 and 69 respectively. The patient whose age is not given in the data they are excluded from the study.

From the above review it can be concluded that COVID-19 is going towards community transmission in India also. It can bring disaster here also as in other countries like Italy, America, Spain, United Kingdom and France. From the data analyzed in Table 1, it is confirmed that for corona age doesn’t matter as it is affecting people from all age group. As media reporting continuously in India mostly affected age group is youngsters.

From the world media, maximum deaths throughout the world are in higher age but confirmed cases are in every group of age. So the demand in India is only to increase the testing facility after those ventilators, ICUs, Beds and COVID-19 dedicated hospital facilities to avoid the higher stages of corona.