Vitamin D is a prohormone that starts to synthesize in the skin and then convert from inactive to active metabolite through liver and kidney. It is essential nutrient for bone mineralization and deficiency can lead to rickets in children and osteomalacia in adult [1,2]. American Academy of Pediatrics (AAP) recommends 400 IU/day in children less than 1 year of life and 600 IU/day for older children as normal daily requirement.

The prevalence of vitamin D in healthy Saudi men was estimated to be 87.8% [3]. In the Eastern Province of Saudi Arabia, vitamin D deficiency was estimated to be more than 65%, despite adequate exposure to sun and consumption of dairy products [4]. Anemia is estimated to affect nearly 1.62 billion people around the globe. Many conditions can lead to anemia; including chronic kidney diseases or nutritional deficiencies. However, iron deficiency anemia is considered to be the cause in almost half of the cases [5]. Although iron deficiency anemia affects mainly children, elderly and young women, it can occur in all age groups [5,6].

Initially, a cross-sectional chart-review retrospective study was conducted between January 2014 and December 2015 to estimate prevalence of vitamin D deficiency of pediatric patients who visited general pediatrics clinics for various medical conditions; but we excluded patents with other causes of anemia or conditions that may contribute to low concentration of hemoglobin; such as, chronic kidney disease, congenital heart disease, congenital anomalies, neurological diseases, endocrine abnormalities, liver diseases and intestinal malabsorption. We also included patients who had, at the time of the visit, results of complete blood count and vitamin D concentrations. Then those patients who fulfilled inclusion criteria were evaluated in retrospective cohort study where patient were grouped according to status of iron deficiency concentrations.

The first section was about demographic data; including: date of birth, age and sex.

The third section contained information about growth. It included: growth by height, growth by weight and Body Mass Index (BMI).

As this was a retrospective study, no informed consent was warranted from parents or guardians of patients. This study was approved by Institutional Review Board (IRB), King Abdullah International Medical Research Center (KAIMRC), protocol number: RJ15/037/J.

During the period of the study, 401 patients attended the general pediatrics clinic in King Abdulaziz Medical City– Western Region. A Total of 290 patients between the age of 6 months and 14 years were included initially (168 boys and 122 girls). 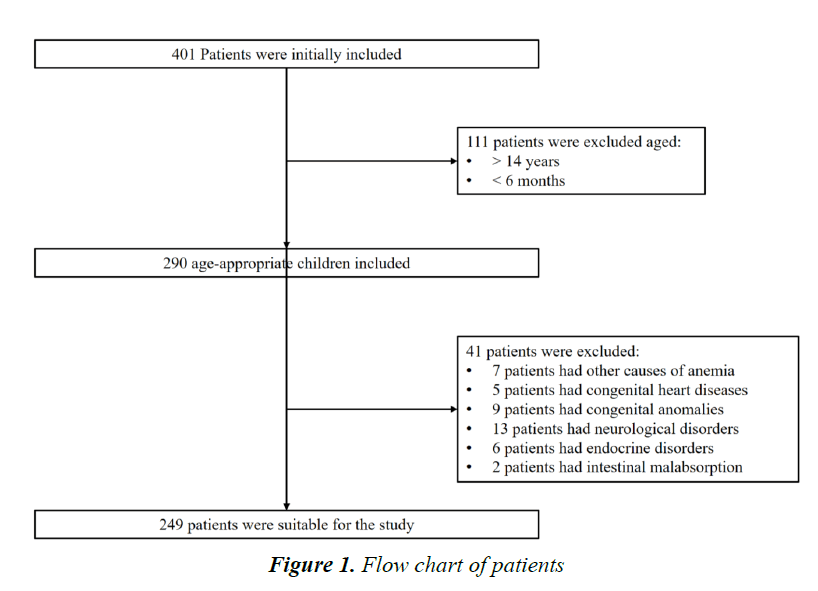 We noticed that children who were obese did have higher incidence of vitamin D deficiency compared to those with lower BMI (p value ≤ 0.0001). However, we could not identify such significance with iron deficiency anemia.

The prevalence of iron deficiency anemia in our study was low compared to other studies [5,6].

To the contrast of global and local results, the prevalence of vitamin D deficiency was low in our study. Furthermore, iron deficiency anemia was not as prevalent as estimated internationally. However, due to the limited number of patients in our study, we think it will be difficult to generalize the results.