The prevalence of hypertension has increased in China, and prehypertension frequently progress to hypertension over a couple of years, both has been public health problems. Therefore a cross-sectional epidemiological survey was conducted in order to determine the prevalence of pre-hypertension and associated risk factors in Zhengzhou, middle of China. A total of 4800 community residents aged 18 year and older from 6 communities were screened by a stratified random cluster sampling method. Baseline characteristics of residents were acquired by questionnaire, physical examination, blood and urine biochemical measurement. Prehypertension was defined according to the Seventh Report of the Joint National Committee (JNC 7) on Prevention, Detection, Evaluation, and Treatment of High Blood Pressure guidelines. Multivariate logistic analysis was used to analyse the risk factors of prehypertension. Prevalence of prehypertension was 30.3% in Zhengzhou adult population, and 36.1% in men and 26.0% in women separately. Prevalence of prehypertension was 27.4% in overweight residents, 32.5% in insulin resistance residents, 36.1% in current smoking residents, and increased dramatically with age. Multivariate logistic regression indicated that age, Body Mass Index (BMI), waist circumference, Homeostatic Model Assessment of Insulin Resistance (HOMA-IR) smoking, and brachial-ankle Pulse Wave Velocity (baPWV), were independent risk factors of prehypertension. Prehypertension has been a major public health problem in Zhengzhou, middle China; obesity and insulin resistance have been important risk factors.

A community-based survey for prevalence investigation of prehypertension was conducted in Zhengzhou from October 2011 to October 2012. Participants were selected using a stratified random cluster sampling method. Three districts were first selected randomly, and then three further communities were also selected randomly from each district. Finally all residents living in Zhengzhou for at least 5 years from the street blocks and/or villages in each community were selected and invited to participate our survey. Using this method, a total of 4065 participants from 4800 citizens complete the entire survey, with a response rate of 84.6%. All participants were given their written informed consent prior to data collection. Illiterate participants had the information leaflet read out to them and provided a thumb impression. The Human Ethics Committees of Zhengzhou People’s Hospital, Zhengzhou, China, approved the study.

All clinical doctors, technicians, medical students and nurses participated in the project had received intensive training on proper methods for screening. All participants were asked to fill in the questionnaire under the guidance of well-trained investigators. The questionnaire consists of age, sex, personal and family history of diabetes (yes vs. no), hypertension (yes vs. no), cardiovascular disease (yes vs. no), education (>10 years vs. 6-10 years vs. 1-5 years vs. no), smoking (yes (current) vs. yes (former) vs. no), alcohol intake (>5 times a week vs. 1-4 times a week vs.

Appointments were made for urine and blood collection from participants by investigators. Participants were asked to provide the first morning urine, it’s the midstream urine, and no proteases inhibitor was used. Menstrual period in females was avoided. Fasting venous blood drawing was performed at local community clinics or health stations. All urine and blood samples were sent to the central laboratory of Zhengzhou People’s Hospital, Southern Medical University. The blood and urine samples were either disposed within 3 hours or stored at 4°C for not more than two days. The central laboratory had successfully finished a standardization and certification programme.

Relevant characteristics were described and stratified according to the blood pressure (normotension and prehypertension). Non-normal distributed variables were transformed into normally distributed variables, and then performed analysis. Continuous variables were given as the mean ± SD, and categorical variables as the percentage in each subgroup. Two-sample unequal variance t-test followed by Bonferroni’s correction was used to calculate whether the differences between normotension and prehypertension groups were statistically significant. p<0.05 were considered significant.

The baseline characteristics of the prehypertension and normal tension residents

Table 1: Baseline information of participants with normal tension and prehypertension. 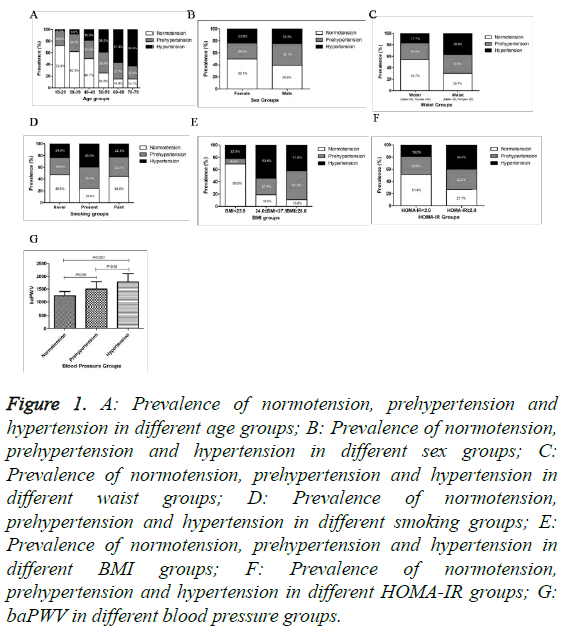 Our results also indicate that prevalence of prehypertension was 27.4% in overweight residents, prevalence of prehypertension was 47.3% in obesity participants, and it was 28.6% in non-central obesity participants, 33.5% in central obesity participants. Therefore, overweight, obesity and central obesity were most important independent risk factors of prehypertension. It was already shown in many studies [17,30]. An interesting research by the Coronary Artery Risk Development in Young Adults (CARDIA) study report that young adults who maintained a stable BMI (within 2 kg/ m2 of baseline) at 6 examinations during 15 years had no significant changes in SBP or DBP, whereas those who had an increase in their BMI ≥ 2 kg/ m2 had substantial increases in blood pressure [31]. Obesity, special in abdominal obesity, is also considered a major risk factor for cardiovascular disease by the Framingham Heart Study [32,33].

Accumulated evidence indicated that baPWV is an independent predictor of blood pressure progression and incident hypertension [37,38]. BMI was associated with PWV, and abdominal obesity is associated with arterial stiffness determined by pulse wave velocity in middle-aged adults [39]. Visceral adiposity index, a good measure of visceral obesity and significantly increased in prehypertension in our previous study [40], was a positive independent indicator of baPWV [41]. However, baPWV was also significantly increased in prehypertension in our study.

Zhengzhou is a rapidly growing city, as well as a major transportation hub for Central China, which had experienced unequal economic prosperity. More and more people drive cars to work, have no time to do outdoor activities and seldom walk around after dinner. People enjoy spending leisure time on the indoor entertainments such as watching TV, surfing on the internet, and playing games both in rural and urban areas. People usually consume a lot of high calorie or high fat food than in previous times. Young guys tend to smoking addiction, white-collar have no time do physical activity, middle-aged have a lot of social activity such as the Chinese business dinner or banquet, then IR present in old people. A research conducted by the CARDIA study reveal that, weight maintenance than substantial weight loss may be a good strategy for preventing or controlling of hypertension [31]. Therefore, Life style changing and thus induced overweight or obesity and/or insulin resistance were the specific problems in Zhengzhou city residents, which increased the potential of CAD. It’s time to act.

The community based cross-sectional epidemiological survey in Zhengzhou had been carried by our study group, and some valuable indications were present, however a large scale prospective research remains to be carried out to further reveal the relationship of risk factors and prehypertension, and the mechanisms through which obesity and IR directly causes hypertension are still an area of research.

This work was supported by grants from the Diagnosis and Treatment of Atherosclerosis and Related Diseases (No: 096SYJH33114), which was supported by Zhengzhou Municipal Science and Technology Research and Development Commission. The funders had no role in study design, data collection and analysis, decision to publish, or preparation of the manuscript.