Prevalence of postpartum depression in an urban setting

Women undergo various physical and mental changes during their postpartum period and are in a vulnerable state of mind. Some women may not cope with these situations as better than others and consequently they undergo a depressive state known as postpartum depression. It is a debilitating disorder and should be screened at an early stage to avoid long term adverse effects. The objectives of this study were to quantify the prevalence of postpartum depression in an urban setting where literacy rate is higher and medical facilities are readily available. This observational cross sectional study was performed in National Hospital, Lahore and Fatima Memorial Hospital, Lahore and was accumulated at RCRS Lahore. Study was accomplished in 4 months after the ratification of synopsis. Non-probability, purposive sampling was used. Sample size was calculated to be of 88 women. Self-administered questionnaire consisting of validated 10 items, Edinburgh postnatal depression scale (EPDS) [1] was employed to detect depression among women living in an urban setting. The grand mean of all the 10 items of Edinburgh postnatal scale was 6.7 ± 2.6 SD. The grand mean of question number 10 was calculated to be 2.37 ± 3.48 SD which shows that most women hardly ever thought about committing suicide. The results depicts that prevalence of postpartum depression in an urban setting is very low. The association between age, postnatal week, educational level and socioeconomic status states that depression most commonly occurs in undergraduate adolescents belonging to lower class families and peeks in their third postnatal week. The prevalence of postpartum depression is quite low in urban settings. This shows that the depressive states are avoided in better literate and socioeconomic statuses. Women are more capable of coping with new challenges and their families are better apt of supporting them through this period.

Pregnancy and childbirth is the most beautiful phase in a women`s life filling her with the contentment of the ability to nurture a new living being. However some women could not cope with the jumble of emotional upsurges and tend to undergo various sentimental disturbances through their childbearing episode resulting in despair and melancholy. The average profusion rate of this debilitating postpartum mood affliction, estimated using an authentic measure, is 13% [2]. A study declared that up to 50% of the cases of postpartum depression go unperceived [3].

Postpartum depression [PPD) usually begins within four weeks of childbirth and may continue for several months or even a year [4]. Sadness, guilt, anxiety, emptiness, social abolition, deeming oneself insubstantial in taking care of the baby, sleeping and eating disorders are some promising manifestations of PPD [5]. The major contributor of this disorder is hormonal imbalance which starts occurring in a woman immediately after delivery of the baby. The imbalance between estrogen and progesterone causes severe baby blues. Stressful life events such as abuse, poverty, poor relationships, death of a loved one or looking after a dependant family member can trigger depression. With an overabundance of persistent life hassles, women may feel incapable to cope with the over and above demands of pregnancy.

Along with the immense pleasure of having a baby comes sleepless nights and irregular feeding schedules which enhance the stress both physically and emotionally [6]. The ill health of the baby may add insult to injury and the mother may start feeling reckless and inept. Studies have suggested that mothers of preterm, very low birth weight infants may be at increased risk for psychological distress postpartum [7]. Clinical observation has also suggested that mothers of temperamentally demanding infants have expressed signs of despair and inadequacy [8].

Lack of education plays a vital role in development of depressive disorders. Illiteracy leads to lack of awareness of the various changes a woman will bear through this period and so the sudden challenge of looking after an infant is over whelming. Illiteracy also hinders the provision of adequate medical facilities to women who undergo postpartum depression. Families are unable to recognize symptoms and no help is sought. Lack of social support, poor marital status and unintended pregnancies are also contributing factors of post partum depression [9].

Infants are highly sensitive to their interpersonal environment but depressed mothers are inconsistent in childcare and have poor coping strategies. The developmental progress of a newborn is undermined consequently of this disruption of normal infant engagements with the mother. Some severely distressed mothers may even have infanticidal thoughts and approximately 4% of them do slay their children [10].

This study aimed at quantifying the prevalence of postpartum depression in an urban setting.

It is hypothesized to be low due to better literacy rate and socioeconomic status. Early recognition of this disorder and consequently demolition is very crucial for the sake of healthy mother infant relationship as there is growing evidence that new mothers and their entire families are shattered due to it.

The Primary objectives are

• Estimate the prevalence of depressing symptoms in women soon after delivery.

• Highlight the incidence of depression in women during childbirth in an urban and developed setting.

The Secondary objectives are

• To identify the causative factors of postpartum depression.

• To assess the level of various factors like age, education, postnatal week and socioeconomic status and their effect in causing depression.

It was a descriptive cross sectional study.

Study was completed 4 months after the approval of synopsis

q= 1-p, e= half width of the desired interval

• Women in their 1st puerperium month

• who have undergone miscarriage

• who have undergone still births

• had a recent death

This method was created by Cox et al. to screen for postpartum depression as well as antenatal depression. It consists of 10 items with a grand total of 30 points. For each query, women were asked to choose one of the four responses that most closely describe how they have felt over the past 7 days. Each response has a range between 0 and 3. Women scoring more than 10 points were considered depressed. Women were asked to check the response that comes closest to how they have been feeling in the previous 7 days. The overall EPDS score was computed as the mean of the scores for the 10 items. Sensitivity for the identification of major depression in pregnancy has been found to be >95% with a specificity of >95% at this cut-off point. Question 10 was given special consideration as it was regarding suicidal thoughts and hence a deciding factor of presence of depressive disorder.

The administration, ethical committee and Department of Medical Education of National hospital Lahore and Fatima memorial hospital Lahore approved to conduct the study in Hospital. Only those patients were included in the study who signed the written consent. All the personal information of participants were kept hidden

All collected data was entered in computer programme SPSS version 20 and analyzed through this software. Mean ± standard deviation were calculated for quantitative variable while frequency (%) was used for qualitative variable. Total agreement score of Edinburgh Postnatal Depression Scale (EPDS) tool was calculated and Mean ± Standard deviation for agreement on individual attributes in EPDS tool was also be calculated. 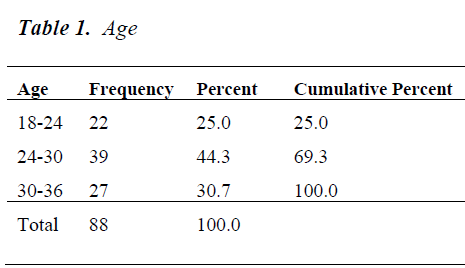 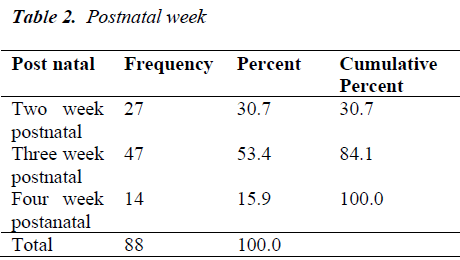 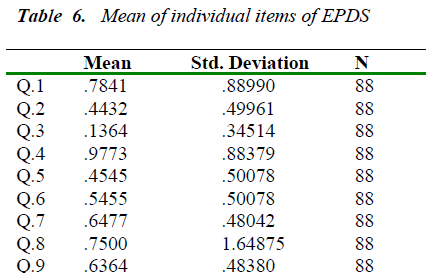 Table 7: Mean and Mode of question 10

Postpartum depression is a widespread disorder that engulfs countless women into its darkness and despair. Its prevalence varies from region to region but its occurrence is a known fact as well as its debilitating effects. It is significant that we investigate its prevalence in our society so that appropriate measures can be taken to avoid its occurrence and treat the effected.

In Pakistan very few studies have been carried out in this regard and are mostly concerning the rural or socioeconomically lower areas. In those areas postpartum depressive symptoms are understandable as the mother goes through so many life stressors. This study aims at the detection of PPD in urban areas where its occurrence is seldom heard of and usually thought to be nonexistent due to better living environment and health facilities. Cultural mindset also poses hindrance in our cognition of presence of such a disorder as child birth is thought to be a huge blessing and a festive occasion.

As it was an urban setting literacy rate was also quite commendable with 54% graduate women, 4% postgraduates and around 40% undergraduates.

The depressive symptoms were measured using the Edinburgh postpartum depression scale, a 10-item self-report scale. This instrument was designed by Cox et al. to screen for postpartum depression. It is the most widely used screening questionnaire for postpartum depression and has been widely validated for not only this condition but also antenatal depression. For every item, women are asked to opt one of the four responses that most closely describe how they have felt over the past 7 days. Each response has a value between 0 and 3. Scores for the 10 items are added to give a total score between 0 and 30. We chose to regard an EPDS score greater than 12 as indicating depression. Although a number of cut-off points have been used, sensitivity for the identification of major depression in pregnancy has been found to be >95% with a specificity of >95% at this cut-off point.

Question no. 10 of EPDS holds special significance as it inquires of any suicidal thoughts that might have occurred to these women. The grand mean of this question was calculated to be 0.693 ± 0.914 SD. Mode was 0 which indicates that most women never thought of committing suicide (Table 7). According to the frequencies show in table 8, 48 women never had suicidal thoughts. 25 hardly ever thought of it, 9 gave it a thought sometimes but only 6 contemplated it often.

After deliberating the results it came became evident that only 6 women out of 88 had their EPDS scores above 1 and were depressed. This shows that prevalence of postpartum depression according to this study is 6.8% (Table 9)

Tables 12 and 13 indicate that undergraduate women tend more towards committing suicide and they usually belong to lower class families.

The limiting fact of this study is that this cross sectional study was done only once with a small sample size. The concealment of emotions by women themselves is a hindrance in compiling proper results. The unavailability of reporting women in the gynecological and psychiatry departments of the hospitals where this study was conducted and further the dishonest attempt of the questionnaire provided. Despite the above mentioned facts, women are still unwilling to disclose their personal feelings of melancholy just to avoid their weakened mental state and their incompetence as a parent