For last 20 years Coagulase negative staphylococci (CoNS) have been identified as major causes of late-onset neonatal bacteraemia in new born intensive care units. In our study an attempt was made to evaluate prevalence of oxacillin resistance CoNS in NICU. The study group comprised of 1087 cases admitted in the NICU of the Gandhi Memorial and associated hospitals, Lucknow during the period of September 2005 to December 2007. Cases included in study were neonates (of age less than or equal to 28 days) suspected to be suffering from the septicemia on the clinical grounds. Samples taken were blood, pus, nasal aspirate, urine and catheter tip. Biotyping was done for all the CoNS isolates. In biotyping S. epidermidis (40%) was the most common species followed by S. saprophyticus (20%) and S. haemolyticus (12%). 54% CoNS were found to be methicillin resistance by DD(oxacillin) and 52% isolates were positive for mecA gene. CoNS causing neonatal septicemia are resistant to the routine antibiotics used to treat newborn infants and vancomycin is often required for adequate therapy.

For last 20 years Coagulase negative staphylococci (CoNS) have been identified as major causes of late-onset neonatal bacteraemia in new born intensive care units [1,2]. Babies with CoNS infection are smaller and more premature than controls but even after controlling for prematurity, they stay longer in neonatal intensive care units than non-infected babies and at considerable cost CoNS infections are associated with a significant mortality and morbidity [3,4] including an increase in the duration of hospital stay and health care costs in adults [5] and VLBW infants [6]. CoNS were considered non pathogenic until their implication as a nosocomial agents and emergence of multiresistance [7]. Healthcare associated infections caused by these microorganisms are responsible for high mortality rates worldwide. The emergence of CoNS population with heterogenous resistance to oxacillin causes a great difficulty to detect them in clinical routine laboratories [8]. In Brazil oxacillin resistance may be present in over 80% of isolates in some health institutions [9]. On this account vancomycin has been widely used and it is major cause for the emergence of glycopeptide resistant isolates [10,11]. Our aim of the study was to show the prevalence of methicillin resistant CoNS in NICU of our teaching hospital.

The study was carried out in the P.G. Department of Microbiology, Chhatrapati Shahuji Maharaj Medical University, Lucknow, India. Neonates with signs and symptoms of septicemia attending the Department of Paediatrics, Gandhi Memorial and Associated Hospitals from Sept., 2006 to Dec. 2007 were included in this study.

A 310 bp fragment of mec A was amplified with primers

250μM of each deoxynucleotide tri phosphate, 20 pM of each primer, 1.1U DNA Tth Plus DNA polymerase and 10μL of DNA, made up to volume of 50μL in Milli Q water and overlaid with 40 μL of paraffin oil. Amplification was performed in perkin Emler DNA Tharmal Cycler 480. The initial denaturation step at 92°C for 3 minutes, was followed by 30 cycles consisting of denaturation at 92°C for 1 minute, then a final extension step at 72°C for 3 minute. Mec A positive isolates generated at 310 bp fragment, which was detected by agrose gel electrophoresis of the amplified product.

The study group comprised of 1087 cases admitted in the NICU of the Gandhi Memorial and associated hospitals, Lucknow during the period of September 2005 to December 2007. Cases included in study were neonates (of age less than or equal to 28 days) suspected to be suffering from the septicemia on the clinical grounds. All the cases were subjected to blood culture examination. Isolates were identified and tested for antimicrobial susceptibility. Samples collected were blood, pus, nasal aspirate, urine and catheter tip.

The maximum numbers of samples were blood samples in all three years followed by catheter tip. We got maximum number of blood samples in year 2006 (70.07%) followed by 2007 (69.45%). Distribution of total isolates are illustrated in table 2. In this study Co-agulase negative staphylococcus (14.09%) and S. aureus (11%) were most common gram positive isolates and Klebsiella.spp (20.8%), E.coli (15.57%) and Pseudomonas spp (15.70%) were most common gram negative organism.

Total 100 samples of CoNS were biotyped S. epidermidis (40%) was the most common species followed by S. saprophyticus (20%) and S. haemolyticus (12%) (Table 1). Sixty out of 100 strains of CoNS (60%) were isolated from blood samples, 24 from pus samples, 10 from urinary catheter tip and 6 from the urine samples. All 100 strains were negative for blood clumping factor and tube coagulase negative. Among CoNS resistance was seen maximum with penicillin (80%). Resistance was minimum with amikacin which was 21.6%. We found 54% of strains were resistant to oxacillin and compared oxacillin resistant and oxacillin sensitive CoNS strains for other antibiotics. 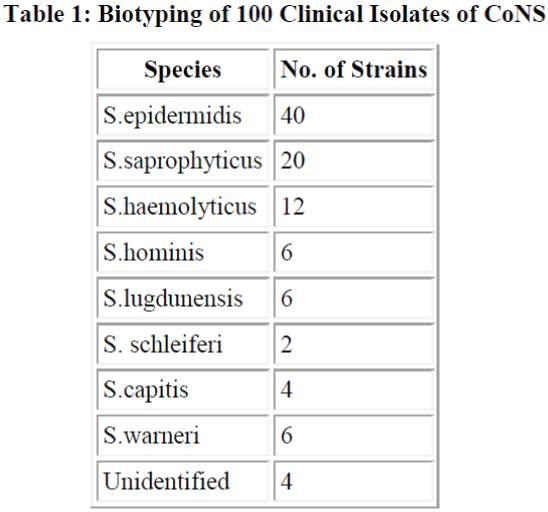 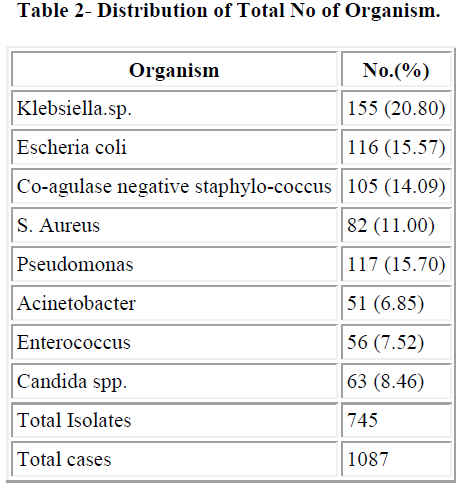 Table 2: Distribution of Total No of Organism 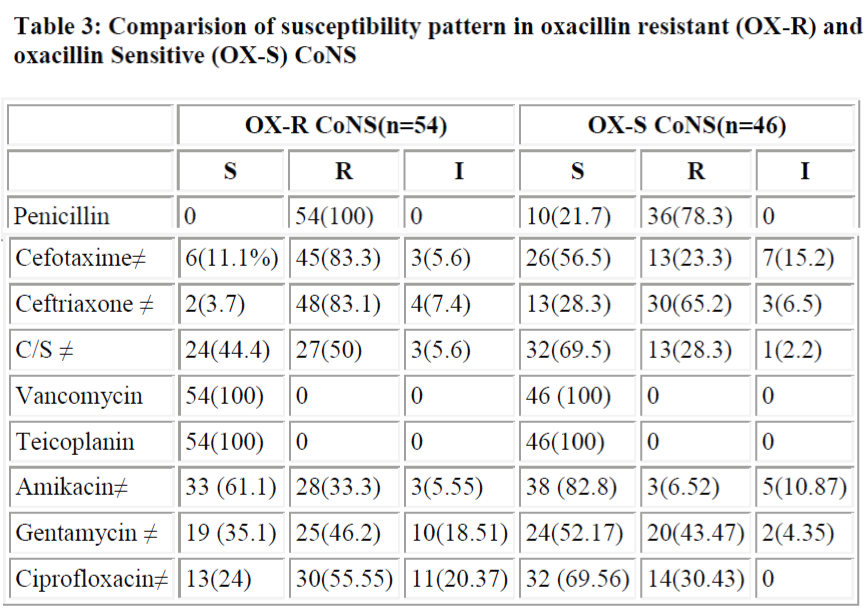 Prevalence of CoNS septicemia has increased in the past decades. Similarly, rate of multiple drug resistant CoNS (MRCoNS) has also increased, and administration of first dose of antibiotic, which is started without waiting for culture report, is directed towards Gram negative organism. In present study we found that Candida spp. accounted for 8.46% of septicemia. In a previous study at our place Roy et al. [14] have reported 6.8% cases of candidal septicemia. In a study by Rani et al. [15], revealed 34.7% of candidal septicaemia. Usha Arora and Pushpa Devi [16] have reported 4.51% Candida spp. from the cases of septicemia. In our study Klebsiella spp. (20.30%) was predominant followed by E. coli (15.57%), Pseudomonas spp. (15.70%), CoNS (14.09%) and S. aureus (11%). Shahsanam Gheibi [17] found 33% Pseu- domonas spp., 22% Klebsiella spp., 5% Enterobacter and 5% E. coli and CoNS was responsible for 27% of Noso- comial infection. Nalini et al. [18] found S. aureus (35.3%) as a predominant organism followed by Klebsiella spp. (18.37%). Prevalence of CoNS septicaemia has 14.09% which was slightly lower than previous study done by Roy et al. (2002) [14]. In India and abroad different authors have reported different incidence of rates of CoNS septicemia ranged from 2.3% to 55%. Mahapatra et al. (2002) [19], Sharma et al. (2002) [20], Baungart et al. Leon et al.[22] have reported 2.3%, 2.87%, 12% and 11% incidence of CoNS septicemia respectively. Similarly, Chaturvedi, Agarwal and Narang [23], Berger et al. [24] and Mokoulu AO, Jiya N and Adesiyun OO [25] isolated 24%, 27% and 24.6% CoNS respectively in their study, which is comparable to present study, while Sanghvi and Tudehope [26], Hansey OJ [27] have reported higher incidence rate, 38.8% 49% and 55% respectively Among the Gram negative group, Enterobacteriacae family predominated, Klebsiella spp. (20.80%) was most common. Other authors also reported Klebsiella spp. as most common gram negative organism (Nalini et al., 2004; Rani et al., 2004) [18,15] while many other have reported Klebsiella as most common cause of neonatal septicemia including the previous study done at our place by Roy et al. [14]. They have reported 24.6% cases of neonatal septicemia caused by Klebsiella spp. National Neonatal Perinatal Data base (2002-03) have also reported an incidence of 32.5% of Klebsiella septicemia. Sharma et al. [20] have reported even higher rate, 61.4% whereas Shahsanam et al. reported 22% of Klebsiella septicemia. Mahapatra et al.[19]

found that Enterobacter (39.5%) was most common organism causing neonatal septicemia. They also reported 4.6% incidence of citrobacter septicemia. E. coli was isolated less frequently (3.7%) in present study compared to the previous study (14%). We biotyped 100 strains of CoNS irrespective of their significance or insignificance and found that most common species was S. epidermidis (40%) followed by S. saprophyticus (20%) and S. haemolyticus (12%). Other species identified were S. homini’s (6%), S. lugdunensis (6%), S. schleiferi (2%), S. capitis (4%) and S. warneri (6%). Raimundo et al. [28] isolated 55 CoNS from the blood of neonates in a NICU. Most common species were S. epidermidis, S. haemolyticus and S. warnei. In other study Goyal et al.[29] observed S. epidermidis, S. haemolyticus and S. saprophyticus and S. horminis upto the species level which is almost similar to our study.

A study by Fluit et al. [30] showed that 100% of MRSA and MRCoNS were penicillin resistant while in methicillin sensitive strains the figures were comparatively lower (84.9% in MSSA and 72.8% in MS CoNS). In our study also 100% of MRCoNS were penicillin resistant, while only 78.3% of MSCoNS showed resistance to penicillin. More than 80% were resistant to third generation cephalosporins. Co-existing resistance to different antibiotics (except gentamycin) is significantly higher in MRCoNS in comparison to MSCONS (p<0.05) (Table 4). None of the strains in our study showed resistance to Vancomycin and teicoplanin in vitro and these drugs therefore can be effectively used if methicillin resistance suspected drug treatment.