Background: Attention deficit hyperactivity disorder (ADHD) is one of the most common childhood psychiatric disorders that affect 2% to 14% of school age children. It is characterized by age inappropriate level of inattention with or without motor over activity and impulsivity in academic and social spheres. Boys are more affected than girls and male female ratio is 4:1. Although ADHD is the most common condition, the evidence from Indian studies is very less. Many studies are required in India to see the magnitude of ADHD. Evaluation of the prevalence of this condition in our country will help clinicians to consider the diagnosis of ADHD and related disorders. This study aims to determine the prevalence of ADHD among school going children (5 years to 12years) and to know the difference between government and private schools as well as to determine male to female ratio in Bengaluru. Methods: This was a cross-sectional study done in Bengaluru city by convenience sampling method. A total 18 schools comprising of both private and government were selected. 3120 Children aged between 5-12years studying in these schools were included in the study. Introduction about ADHD was given by Paediatrician to the teachers followed by screening for ADHD was done by teachers using Conner’s teachers rating scale for all children. Positive cases in these were screened with Parents and Paediatrician by using Conner’s parent rating scale. Children who were positive in Parents and Paediatrician rating scale were interviewed by the Psychiatrist at KIMS Hospital and ADHD was diagnosed by using DSM V criteria along with IQ assessment and treatment was started for the needy. Results: The prevalence of ADHD in our study was 1.3%. Male to female ratio was 1.6:1. Among the positive cases, children belonging to Hyperactivity type were 34.1%, inattention was 9.8% and combined type was 56.1%. Prevalence in private school was 1.25% and government school was 1.37%. Total dropouts were 2.5% who did not reach the hospital for the final diagnosis. Conclusion: ADHD is prevalent worldwide and it is also one of the emerging disorders in our country. It constitutes a significant mental health disorder in children and 50% of this disorder will be carried to adulthood. In our study we had prevalence of 1.3% ADHD and 2.5% dropouts due to lack of awareness of this disorder, their work pressure, distance, social and financial constricts. It is high time to identify the disorder and creating wide spread awareness about ADHD by the Paediatrician’s among the Teachers, Parents and Primary care Physicians, in order to prevent the social and academic impact of the disorder. By introducing an ADHD standard screening methods in all schools along with the regular health check-ups will bring awareness in the society for the healthy future of the children. Lastly every school should have a counsellor to overcome ADHD and other related problems.

Attention Deficit Hyperactivity Disorder (ADHD) has been described all around the world and is the most common neurobehavioral disorder of childhood and one among the most common chronic health conditions affecting school-age children [1,2]. It is characterized by inattention, increased distractibility with difficulty sustaining attention, poor impulse control and decreased self-inhibitory capacity, motor over activity and motor restlessness [3].

The first example of a disorder that appears to be similar to ADHD was given by Sir Alexander Crichton in 1798. George still, conducted study on a group of 20 children whom he described as having a deficit in “volitional inhibition [4]. He reported that there was an overrepresentation of male subjects, a family history of alcoholism, criminal conduct, and depression, a family predisposition and the possibility that the condition may arise from an injury to the nervous system. Still’s observations are quite common and have been corroborated in later research.

Later, it was stated that mild forms of brain damage in infancy, although unnoticed at that time, could lead to behavioural sequelae, which becomes first apparent at school [5,6].

In 2008, it was defined as a “persistent pattern of inattention, hyperactivity and impulsivity, that is more frequent and severe than is typically observed at a comparable level of development” affecting approximately 5% of school-age children and frequently persisting into adulthood [7-9].

Population surveys suggest that ADHD occurs around the world in about 5% of children and it is carried to about 2.5% of adults. These reported rates vary depending upon the nature of the population sampled and the method of ascertainment [3]. Many studies across the globe have reported the prevalence of ADHD in 5% to 10% of school aged children. Most of them are western studies and there is a little information about the same from India.

ADHD is often undiagnosed in children. This is usually due to lack of awareness of ADHD among parents and teachers. Children with ADHD have difficulty in performing scholastically to their optimum levels. This translates to stress on the family and in turn has an emotional impact on the child. Hence, there is an urgent need for continued teamwork on prevalence of ADHD in our country.

This study provides the much needed epidemiologic data on ADHD as well as understands the influence of socioeconomic factors in the same which in turn would help in designing the programme to increase the awareness of ADHD in parents as well as teachers.

1. To study the Prevalence of ADHD in children aged 5-12 years in urban schools of Bengaluru.

2. To compare the Prevalence of ADHD in Government and Private Schools.

3. To create awareness among the teachers and parents about ADHD in children.

The study was conducted in Bengaluru South block schools.

School children in the age group 5 to 12 years in Bengaluru city.

The study protocol was submitted to the ethical committee of Kempegowda Institute of Medical Sciences and clearance obtained before the study was commenced.

Method of Collection of Data (Including Sampling Procedure)

Sample size: N=3120, Sample size has been calculated taking prevalence of ADHD among school going children as 5% at 5% significance level and 10% allowable error.

The collection of data was done in 4 phases. These rating scales assist in determining whether children between the ages 5 to 12 years might suffer from ADHD. Details are presented in presented in supplementary file.

Conner’s Rating Scale, Revised (CRS-R): Developed by C. Keith Conners, Ph.D., CRS-R is used as part of a comprehensive examination and is designed to be easily administered and scored. CRS-R is the widely used rating scale and has set the standard for assessing ADHD and related problems. CRS-R is available in long and short versions for both parents and teachers. Short version (each comprising of 27 items) of both parent and teachers rating scale was used in our study.

Based on the types of symptoms, three kinds (presentations) of ADHD can occur:

1. Combined Presentation: if enough symptoms of both criteria inattention and hyperactivity-impulsivity were present for the past 6 months

2. Predominantly Inattentive Presentation: if enough symptoms of inattention, but not hyperactivity-impulsivity, were present for the past six months

3. Predominantly Hyperactive-Impulsive Presentation: if enough symptoms of hyperactivity-impulsivity but not inattention were present for the past six months.

We found 41 children with ADHD, which translates to a prevalence rate of 1.3 % in school going children of age group 5 to 12 years. The prevalence was 1.6% in boys and 1% in girls.

This Table 4 shows that in our study 53.66% of the children with ADHD belonged to Government school, 46.34% to private. The difference was not significant in statistical analysis.

Table 2. Prevalence rate based on age

Table 3. Distribution of ADHD children based on different subtypes of disorder 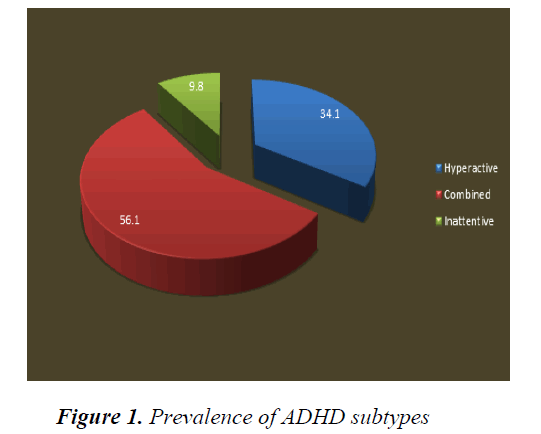 Our study shows 1.3% prevalence of ADHD. Other studies which have prevalence of 2-15% Dropouts were 2.56%. Among these, most of them were having significant scores in Teachers, Parents and Pediatrician’s scale and were unavailable for follow up at the KIMS hospital. The probable reasons behind this is lack of knowledge and false beliefs about ADHD in our country and in a metropolitan city like Bengaluru, many could not approach us to the hospital during working hours for final follow up with all their work pressure, distance, social and financial constricts.

A review of 17 studies conducted in all continents showed a wide range of prevalence ranging from 0.2% to 23%. These studies were done using different criteria (DSM and ICD) and strategy adopted to collect information were different (i.e., only parents or teacher or both, whether functional impairment required, whether child was interviewed). Studies based on information from either only parents or teachers have higher prevalence than the studies which collect information from both parents and teachers, which in turn will be higher compared to studies which includes interview in addition to the information from both parents and teacher.

According to Kurtzke et al., epidemiological studies with a higher prevalence should be considered as estimated or screening prevalence because many false positives may be included. That may explain part of the differences observed between the results obtained from different studies [12].

More recent community based epidemiological studies have reported much lower prevalence figures. The Great Britain office of national statistics conducted a survey of more than 10,000 children and found a DSM-IV based prevalence of 1.4% in 1999 and 1.5% in 2004. A similar profile is seen in recent studies conducted in developing countries. In Brazil DSM-IV based prevalence of 1.8%, 2% in Bangladesh and 1.6% in India were noted. In our study, the prevalence is 1.3% and is consistent with these recent studies. [13].

Our study gives the sex ratio of 1.6:1 which is (low) compared to above studies, but a recent meta-analysis of studies done in last decade gives a pooled prevalence of (2.4:1) which is consistent with the present study [16].

According to Goodman et al. [16] the gender differences strengthens the evidence for a biologically based, often genetically transmitted etiology of hyperkinetic disorder.

This difference may be due to the fact that girls have ADHD with higher predominance of inattention type, causing less trouble to the family and at school, and are therefore less easily identified.

In our study, ADHD was associated with poor academic performance in 24.4%, average performance in 75.6% and none in good performance (based on marks obtained in tests and examinations). This is in accordance with the fact that there is functional impairment in children with ADHD.

Our study shows higher prevalence of ADHD among children whose mothers were homemakers and is not consistent with the hypothesis that homemakers are in a better position to look after their children at home both socially and psychologically [18].

High proportions of mothers in this study were either had primary education or illiterate, which puts more weight on education as a contribution factor. ADHD is one of the best investigated child mental health disorders. ADHD has received a great deal of clinical, scientific and public attention in recent years. In the last decade, western literature on this syndrome has grown but in India only a few studies have been done. Hence this study was done to fill this void.

There is lack of awareness about ADHD in parents, teachers and even among treating clinicians to create necessary awareness about ADHD, study results were discussed in parent – teacher meet conducted monthly in the school. Early detection and intervention about ADHD were explained. Teachers were also trained on classroom management of ADHD children.

Our study aim was to find the prevalence of ADHD among 5-12years old school going children in Bengaluru. We found a prevalence of 1.3% with male: female ratio of 1.6:1. Although the prevalence in our study is low compared to studies in western countries and also some Indian studies, it still constitutes a major public health problem. Epidemiological survey of ADHD is important in planning health services. Therefore further interview based studies assessing the prevalence of ADHD as defined by DSM-V criteria are required in different parts of the country to get a clearer picture of its burden in our country. The knowledge of ADHD is lacking in teachers, parents and also in the society, by this study we would like to recommend the ADHD screening should be done regularly along with routine health check-ups done annually in every government and private school, counsellors should be there in every government and private school to help students to overcome these type of issues.