Prevalence of Anaemia and the Relationship between Haemoglobin Concentration and CD4 Count in HIV Positive Children on Highly Active Antiretroviral Therapy (HAART) in Lagos, Nigeria

1University of the West of Scotland, Paisley, Scotland, United Kingdom.

Background: Anaemia is commonly reported among people living with HIV, however the prevalence of anaemia in highly active antiretroviral therapy (HAART) experienced Nigerian children has not been well defined. This study addressed this gap and evaluated the relationship between haemoglobin concentration and CD4 count in the presence of HAART.

Result: At 54.2%, anaemia was still highly prevalent in HAART experienced children in Lagos, Nigeria. The prevalence of anaemia among immune deficient participants (CD4 count <500 cells/ mm3) was not significantly different from the prevalence of anaemia among participants with no significant immune deficiency (CD4 count ≥ 500 cells/mm3) (52% v 55%, Pearson Chi- Square, P= 0.783). Haemoglobin concentration was not significantly correlated with CD4 count (Pearson correlation (r) = 0.081, P = 0.302) and haemoglobin concentration could not be used as a predictor of immune status (Binary logistic regression, OR 1.461, 95% CI 0.866 – 2.464, P= 0.16).

Conclusion: Despite HAART use, anaemia is still highly prevalent among HIV positive children in Lagos, Nigeria. With the known negative influence of anaemia on HIV disease progression, it is important that measures to address anaemia in these children are evaluated and implemented.

Anaemia has been reported to be one of the more common haematological disorders affecting people living with HIV (PLHIV) [1-3]. Studies have shown that the prevalence of anaemia in HIV disease can be up to 80% [4-6] depending on region and threshold used to define anaemia. HIV related anaemias may be as a result of opportunistic infections [7], as a side effect of chemotherapeutic treatment [8-11], as a result of changes in cytokine expression with resultant decrease in blood cell production [12,13], or as a consequence of micronutrient deficiencies [7].

In HIV infection, the presence of anaemia could translate to significant reduction in quality of life [14] and faster HIV disease progression [11,15]. Furthermore, anaemia is believed to be a predictor of morbidity and mortality in PLHIV [16]. The relationship between anaemia and HIV prognosis has been described in Figure 1.

A number of mechanisms through which HAART corrects prior existing anaemia have been proposed. It is believed that the ability of HAART to protect against opportunistic infections could indirectly ameliorate the negative effects of HIV infection on erythropoietin levels [26]. In addition, by inhibiting HIV-1 replication and reducing viral loads, HAART use is linked with improved hematopoietic progenitor cell growth [27,28]. Furthermore, use of protease inhibitors are also linked to a reduction in hematopoietic progenitor apoptosis [29]. Hence HAART use potentially translates to increased blood cell generation, and resolution of pre-existing anaemia.

HAART use is also associated with immune restoration which is characterised by an increase in CD4 cell count [30]. With the restoration and preservation of CD4 cells, quality of life is improved and risks of HIV related morbidity and mortality is reduced [30].

This study was carried out as part of baseline evaluations of participants enrolled in a multivitamin intervention study (NCT02552602). Participants were recruited from two HIV treatment centres in Lagos, Nigeria: The Nigerian Institute of Medical Research (NIMR) and the Lagos State University Teaching Hospital (LASUTH). Both hospitals provide care, treatment and support to people exposed to HIV or living with HIV. Recruitment was conducted from May 2015 to August 2015.

A total of one hundred and sixty four participants (n=164) were included. Inclusion criteria were; 1) Children aged 5-12 years who have tested positive to HIV; 2) Children attending the outpatient clinic at the HIV treatment centres in NIMR and LASUTH; 3) HAART use for a minimum of 12 months; 4) Children whose guardians could give informed consent. Exclusion criteria; 1) Children enrolled in other studies; 2) Children on immune suppressive therapy; 3) HAART naïve children; 4) Children with missing data for CD4 count, haemoglobin concentration and HAART initiation date.

Definitions of anaemia and immune status

This study was part of baseline evaluations for a randomized controlled multivitamin study. Ethics approvals for the multivitamin study were obtained from the Institutional Review Board of the Nigerian Institute of Medical Research, the Health Research Ethics Committee of the Lagos State University Teaching Hospital and the Ethics Committee of the School of Health, Nursing and Midwifery, University of the West of Scotland. 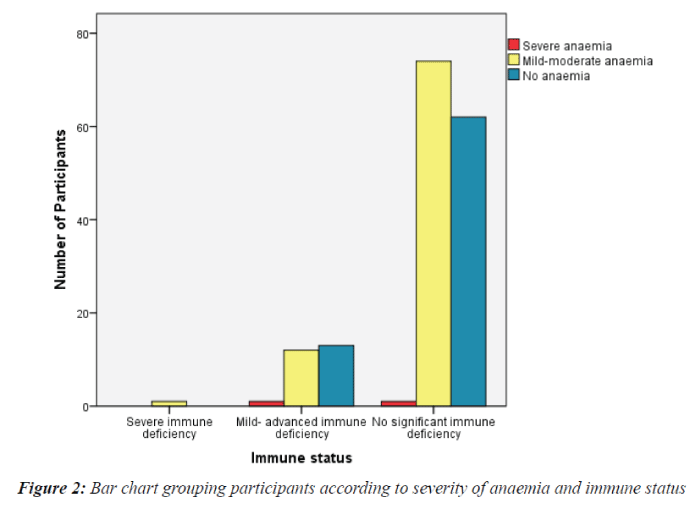 Figure 2: Bar chart grouping participants according to severity of anaemia and immune status 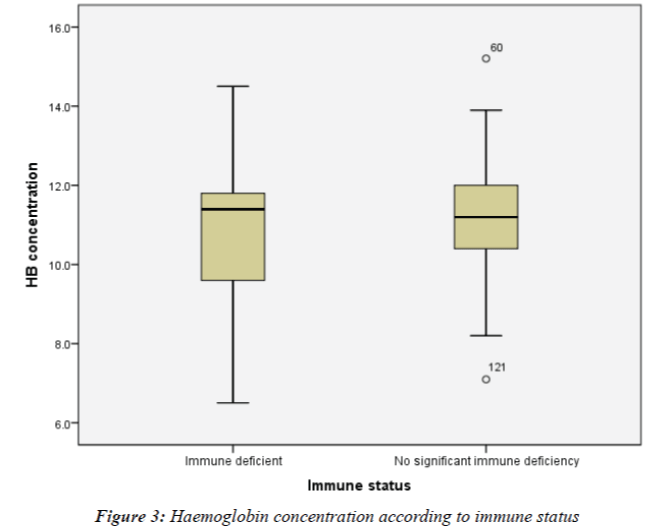 When data for all study participants (164/164) were analysed, there was no correlation between Hb concentration and CD4 count (Pearson correlation (r) = 0.081, P = 0.302). However, when data specifically for anaemic participants (89/164) were analysed, there was a weak positive correlation between Hb concentration and CD4 count (r = 0.249). Further analysis using binary logistic regression showed that Hb concentration of anaemic participants could not be used to predict immune status (OR 1.461, 95% CI 0.866 – 2.464, P= 0.16). For binary logistic regression analysis, CD4 count was analysed as a binary categorical variable; CD4 count < 500 cells/mm3 representing immune deficiency and CD4 count ≥ 500 cells/mm3 representing no significant immune deficiency ) (Table 3).

Table 3: Number of participants in each group based on CD4 count and Hb concentration

Anaemia is a significant predictor of HIV disease progression [1,11,15,33,34]. Hence the need to diagnose anaemia and treat the underlying causes is pertinent to improving overall health outcomes of PLHIV. Anaemia, defined as Hb < 11.5 g/dl [31] in this study, was found to be highly prevalent (54.2%). The prevalence of severe anaemia was very low (1.2%), suggesting that severe anaemia may be a less prevailing occurrence in patients experienced on HAART [35,36]. However, mildmoderate anaemia was still highly prevalent at 53.0%. This prevalence was higher than that reported in similar studies conducted in HAART experienced children in Eastern Ethiopia (39.2%) [20], Kenya (16.6%) [19], South Western Ethiopia (21.9%) [37], 5.6% -9.2% in seven West African countries excluding Nigeria [36], as well as in Uganda and Zimbabwe (7%) [38].

Lower Hb concentration threshold used to define anaemia in some of the previous studies would have contributed to the non-comparability in reported prevalence. For some of these studies, anaemia in children was defined as Hb concentration below 10 g/dl [19,37] and 10.5 g/dl [39,40]. Hence the lower cut-offs could have considerably lowered the prevalence of anaemia and underestimated the magnitude of the problem.

Another factor that could have contributed to the high prevalence of anaemia seen amongst study participants is the possible effect of zidovudine. The known side effects of macrocytic anaemia and myelosuppression associated with zidovudine use in PLHIV have been reported in several studies [38,41-46]. With 81.1% (133/164) of study participants on zidovudine (AZT) based HAART regimen, the potential contribution of AZT to the high prevalence of anaemia may have been substantial. Other possible factors that may have contributed to the higher prevalence of anaemia in this study compared to previous studies include dissimilar methodologies used, heterogeneity of study populations, varying nutritional status of the different study populations bearing in mind the effect of malnutrition on anaemia [24,25], varying interventions used to prevent anaemia in the different settings as well as socioeconomic and geographic variations.

This study is limited by the fact that (for participants with anaemia), the type of anaemia was not identified and underlying cause(s) of anaemia were not determined. Furthermore, the prevalence of anaemia in HIV negative children of comparable age and in similar settings was not determined. Hence the interpretation of our prevalence results may be limited. This study is strengthened because both male and female children were included; hence results can be generalized to similar settings in Nigeria. Furthermore, all the data used for this study were from HAART experienced children as opposed to HAART naïve children included in majority of earlier studies. This study therefore contributes to some of the newly emerging data on the prevalence of anaemia in the presence of HAART.

Despite increasing HAART access to PLHIV, this study provides an insight to a health challenge that remains unresolved in HIV positive children in Lagos, Nigeria.

The authors declare that there are no competing interests.

We are thankful to the children who participated in this study and we are grateful to their guardians as well. We thank Panets Education Trust for Africa (now merged with Canon Collins Educational and Legal Assistance Trust) and the School of Health, Nursing and Midwifery, University of the West of Scotland for financial support for the study. We thank Partec Nigeria Limited for donating the CD4 count kits used for study.

The contents of this article are from the authors. The study sponsors have made no input.