Department of Oral and Maxillofacial Surgery

1Department of Periodontics and Community Dentistry,

Drug-induced gingival enlargement is an iatrogenic condition which is usually not preventable. Certain factors like thorough tooth brushing, proper oral hygiene measures, regular dental flossing and professional care of oral cavity are helpful. Surgical excision of the gingival overgrowth is a treatment of choice but non-surgical methods should be adopted first. More research is needed to investigate measures that can prevent or reduce gingival overgrowth or prevent recurrence. A thorough review of literature reveals that inadequate data exist pertaining to prevalence and treatment options available for iatrogenic gingival hyperplasia. Studies with large number of samples, with statistical analysis, are required to make the data more scientific. Preventive measures have limited value and require regular assessment of patients. Hyperplasia does occur after surgical intervention but percentage of recurrence is not available. Hyperplasia can be managed to a certain extent by withdrawing or changing the medication. However, surgical intervention remains the mainstay of treatment. This paper reviews various aspects of prevalence, pathogenesis and treatment options available to manage drug-induced gingival hyperplasia.

Gingival enlargement is a clinical condition which has been widely studied and is directly associated with specific local or systemic conditions. There are several medications now available that cause gingival overgrowth. (Gingival enlargement or gingival overgrowth is the preferred term for all medication-related gingival lesions which were previously termed as “gingival hyperplasia”. The term gingival hyperplasia, in fact, did not reflect the histopatholgical composition of drug-induced gingival effects). These medications can be broadly divided into three categories: anti-convulsants, calcium channel blockers and immuno-suppressants [1]. Gingival overgrowth caused by these medications is not only aesthetically unacceptable but also impairs oral hygiene, resulting to periodontal disease, caries and nutrition [2].

Although the pharmacological effect of each of these drugs is different they produce a similar effect on gingival connective tissue causing common histopathological findings. This indicates common pathway of induction [3]. The exact mechanism of this effect is unclear, particularly of immunosuppressive agents [4]. However, the pathognomic mechanisms involve different factors such as dental plaque, presence of genetically predetermined gingival fibroblasts (named responders) and effect of drug itself, with all compounds affecting the trans-membrane flow of calcium [5]. This changes the ongoing metabolism of connective tissue fibroblasts, causing an increase in component of extra-cellular matrix [6-8]. Over all, there are at least two mechanisms which have been proposed. One is related to an interaction between the drug and gingival inflammation secondary to bacterial irritation. The other suggests that the drug might alter the complex cascade of biochemical events surrounding the inflammatory response, resulting in an increased gingival connective tissue production [9].

Gingival epithelium plays an important role in protecting the periodontium from bacterial infections and mechanical trauma. It possesses the capacity of fast self renewal which contributes to gingival defense, since continuous desquamation of superficial epithelial cells prevents bacterial colonization. Therefore, it is suggested that changes in turnover rate of gingival epithelium may affect progression of periodontal disease [15].

Histologically, drug-induced gingival overgrowth is associated with thickening of epithelium with elongated rete pegs and fibrosis in the lamina propria, with increased number of fibroblasts [16,17]. Histo-chemically there is an increase in number of fibroblasts containing large amount of mucopolysaccharide sulphate in nifedipine and phenytoin induced gingival hyperplastic tissue [18].

Ramon et al. [19], from their studies, showed that the thickness of the oral epithelium in nifedipine-induced therapy was about five to 10 layers greater than in controls [19].

In another study Sooriyamoorthy, Gower, Eley [25] concluded that an increase in androgen metabolism is an important factor for drug-induced gingival overgrowth and indicated that either the respective drugs or their metabolites can be cytotoxic for less active gingival fibroblasts and facilitate highly active populations of fibroblasts which are involved in the matrix synthesis.

Nurmenniemi, Pernu, Knuuttila [27] found that that this increased epithelial thickness in both the groups, nifedipine and cyclosporine A is due to increased mitotic activity, especially in the oral epithelium.

The clinical appearance of drug-induced gingival growth is mostly characteristic; however, variation is possible depending upon the site, nature of irritant and extent of inflammation. Usually there are no differences in clinical characteristics of gingival overgrowth induced by different drugs but more severe degree of gingival enlargement is seen in patient treated with phenytoin [28]. Growth normally starts from the inter-dental papilla and may favor the appearance of clinical symptoms, signs that include pain, bleeding and friability of tissue, abnormal movement of the teeth, changes of appearance, phonetics, and occlusion, as well as appearance of dental caries and other periodontal disorders (Figure 1) [29,30]. 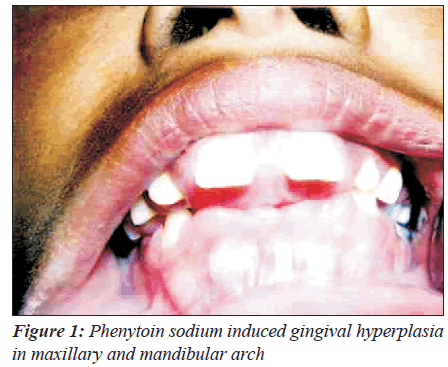 With the progress of the disease the gingivae grow into massive tissue. This extent of growth may progress to the extent that it may interfere with the common functions like speech and mastication or mastication alone. The pre-existing periodontal infection, the chemotherapy and subgingival microbiodata affect the periodontal infection and general health. If such cases are not treated, the disease leads to more severe destruction of periodontium and bone.

The preventive measures of drug-induced gingival hyperplasia include recognition of the potential patients and rendering early intervention. Proper oral prophylaxis and good oral hygiene can prevent the phenytoin-induced gingival hyperplasia [31]. Further, a correlation exists between three variables and an increased risk of developing DIGH in patients receiving phenytoin therapy: gingivitis, a visible plaque index and duration of phenytoin therapy [32].

Prevention of recurrence after hyperplasic gingivectomy also deserves consideration. Many attempts have been made in this direction and chlorhexidine mouth wash has achieved some success. Chlorhexidine gluconate (0.1%) mouthwash is used three times daily in addition to aggressive plaque control measures. Meticulous plaque control by thorough and frequent tooth brushing and dental flossing appears to be an effective method. However, the unwanted effects of chlorhexidine of bacterial resistance and taste disturbance limit its long term use. Since phenytoin inhibits the folic acid metabolism, oral folic acid supplementation and folic acid mouthwash 1mg/ml has also been attempted, but with uncertain efficacy [33]. It has been suggested that folic acid mouthwash may reduce gingival inflammation by binding to the plaque-derived endotoxins which may ultimately reduce gingival overgrowth. This hypothesis is, however, yet to be verified.

This is the most effective treatment of drug-induced gingival enlargement. It usually takes few weeks to resolve the gingival lesions [34,35] but response to this method varies [36].

Usually reduction in gingival overgrowth is noticed where a structurally different calcium channel blocker is used. Same therapeutic goals can be archived by using structurally different medications. However, Linderman, Lumerman, Reuben, Freedman [37] had reported the same effect where verapamil was substituted for nifedipine.

With the obvious side effects produced by phenytoin sodium, the trend of using this medication is changing. Now carbamazepine and sodium valproate are preferably used as alternatives to phenytoin sodium since they have not shown to cause drug-induced gingival hyperplasia.

The prevalence and severity of drug-induced gingival hyperplasia in patients receiving tacrolimus has been shown to be approximately half of the cyclosporine. However, even after the change in immunosuppressant medication from cyclosporine to tacrolimus, calcium channel blocker may be continued. The concomitant use of calcium channel blocker increases both the severity and prevalence of drug-induced gingival hyperplasia [38]. Thus the change in medication from cyclosporine to tacrolimus neither reduces the severity nor leads to complete resolution of overgrowth [39].

Gingival hyperplasia is a known complication of cyclosporine therapy with a frequency between 21-25% in renal transplant patients [40]. A study of clinical trials revealed benefits of systemic azithromycin in such conditions [41] Hooda and Narula [13] gave azithromycin to their patients with gingival hyperplasia and symptomatic relief was noticed in all patients. They proposed that treatment with azithromycin is inexpensive and effective in short period of time, avoiding gingival surgery in large number of patients. However, patients’ refractory to treatment, discontinued cyclosporine and replacing with tacrolimus might be appropriate as gingival hyperplasia is rarely observed in tacrolimus-treated patients [13].

Systemic administration of azithromycin was found to be more effective in reducing overgrowth than the local delivery preparation [42].

The role of metronidazole in drug-induced gingival overgrowth is being regularly studied. The reported results vary. Wong, Hodge, Lewis [43] reported a total resolution of high grade cyclosporine A-induced gingival hyperplasia in each of their four patients.

However, Montebugnoli, Servidio, Prati [45] suggested that the repeated use of locally delivered metronidazole gel associated with periodontal conventional therapy as simply an additional procedure, probably providing a greater long- term efficacy in the overall management of gingival overgrowth induced by cyclosporine than conventional therapy alone. In another study, Aufricht, Hogan, Ettenger [46] observed no improvement in the gingival hyperplasia of their serially observed children after metronidazole treatment. The results differed with Wong, Hodge, Lewis, Shrpstone, Kingswood [43] for which they suggested that the variation might be due to differences in age of the patients.

However, studies on larger samples size are needed to confirm their role. The current studies have small sample size and were short term too. Further, statistical analysis is also required to decipher the significance of results. Azithromycin appeared to be more effective than metronidazole [47].

The role of antiseptic mouth rinses in the management of drug-induced gingival hyperplasia is not established. O’Neil and Figures [39] have shown that regular use of chlorhexidine mouth rinse helps reduce chances of recurrence after gingival surgery. We could not find out if any other mouthwash has been used for prophylactic or therapeutic purpose in such cases.

Wherever possible, non-surgical techniques should be adapted [48]. However, before rendering such treatment, local factors that enhance plaque accumulation should be eliminated. Such techniques can limit the occurrence of gingival overgrowth, reduce the plaque-induced gingival inflammation and also reduce the rate of its occurrence [49]. Professional debridement with scaling and root planning as needed had been shown to provide some relief in such cases [50]. A few individual case reports revealed that self administered oral hygiene procedures, scaling and root planning resulted in reduced drug-induced gingival over growth [51].

Surgical treatment is the definitive therapy of the druginduced gingival overgrowth. However, the recurrence cannot be avoided. Since the labial gingiva of anterior region is commonly involved, surgery is frequently performed, primarily for aesthetic reasons, before any functional consequences are seen. Seymour et al. [52,53] suggested that surgical interventions should be carried out when clinical overgrowth index score is evident.

The apically repositioned full thickness flap is a better technique and bears many advantages. It eliminates periodontal pocket, improves the alveolar bone morphology, preserves the attached gingiva and improves aesthetics in the labial region when moderate periodontitis with gingival overgrowth is treated. This technique is specially indicated in the cases with lack of keratinized tissues or in the presence of osseous defect [57].

There are many types of lasers available to treat gingival overgrowth. Lasers possess remarkable tissue-cutting ability and provide rapid haemostasis. Lasers with the cutting of tissues also generate a coagulated tissue layer along the surgical wound which promotes healing [59]. These properties of lasers make the management of drug-induced gingival overgrowth accurate, bloodless operative phase, less painful post-operative phase, minimal oedema and scarring [60] and avoid need of periodontal dressing. Thus CO2 laser had been used to excise gingival over growth and studies demonstrated the technique significantly lowered the rate of recurrence and patients’ preference of the technique [61]. Although the technique bears all the desired benefits, it involves costly equipment.

We have covered almost all the aspects of drug-induced gingival growth presented in literature. Clinicians would find the paper helpful in deciding the treatment strategy in drug induced gingival overgrowth. It should always be kept in mind that when drugs which cause gingival enlargement are started, the patient should be evaluated for gingivitis, educated on dental and oral hygiene, motivated to brush thoroughly, use dental floss regularly and advised for regular dental check-ups. On the other hand, physicians should also visually examine oral cavity on every visit of the patient and if any changes are noticed, consider therapy and the required dental treatment. Whatever strategy is decided, focus should be on the prevention of growth and recurrence.