The fixed dose combination (FDC) therapy varies among countries. The available combination drugs in the market include both rational and irrational ones. The use of irrational fixed dose combination has a great impact on consumers, society and the nation. Since a few studies on prescribing patterns of fixed dose combination are available in literature, there is need for such a study. In this prospective study, carried out in a tertiary care teaching private hospital, one thousand prescriptions from the hospital pharmacy were collected, classified according to anatomic therapeutic and chemical (ATC) classification. The fixed drug combination used was compared with the essential drug list of World Health Organization (WHO) and other countries. In one thousand prescriptions, 3151 drugs were prescribed, of which, 960 were fixed dose combination drugs. Among those, the anti-infective agents for systemic use (17.5%) and drugs affecting the central nervous system (17.08%), cardiovascular system (15.41%) and alimentary system (11.14%) mainly contributed to the fixed dose combinations. The highest percentage of FDCs was seen among the nervous system (36.6%), anti-infective (33.67), anti-neoplastic (31%), respiratory system (31%) and various drugs (35.90%) category which were more than the average percentage of fixed dose combination drug use (30.47%). Majority of the FDCs prescribed (73.25%) were not approved in the WHO essential drug list. There is a significant burden of these combinations on consumers, physicians and policy makers which needs to be handled with care.

The goal of drug therapy is to achieve the desired therapeutic response without producing toxicity, i.e., maximizing efficacy yet minimizing untoward effects. Traditional approach with monotherapy is successful in only 50% of instances, because multiple mechanisms are involved in the pathogenesis of most diseases, and a single drug may not interdict all offending pathways [1]. Low adherence to the prescribed medication for chronic conditions is well documented in literature [2,3]. The reason could be specific condition being treated, health system, the social and economic conditions and more importantly the therapy itself [4]. Concomitant use of two or more drugs (polypharmacy) adds to the complexity of individualization of drug therapy. The dose of each drug should be adjusted to achieve the optimal benefit. To obviate these problems, fixed dose combination of drugs (FDC) were developed [5].

The FDC of drugs is defined as product of two or more active ingredients in a defined composition. They are accepted when the dosage of each ingredient meets the requirement of a defined population and if the advantages outweigh the added risks of using two or more drugs [6]. Even though the WHO included only 25 FDCs in its essential drug list [7], the major chunk of prescription includes these combinations. This is because there has been little scientific study of these preparations but much emotion and rhetoric has been expended both for and against them [8]. Hence, there is a need to study the pattern of prescription from time to time to evaluate their rationality. In this context we undertook this study to know the prescription pattern of FDC in our setting.

In this prospective observational study, we collected prescriptions from the pharmacy of Kasturba Hospital, a 1650 bedded teaching, tertiary care hospital catering to the healthcare needs of South-West districts of Karnataka, Goa and Northern districts of Kerala. A total of 1000 prescriptions were collected in the pharmacy after obtaining approval from the Kasturba Hospital Ethics Committee. The prescriptions of patients consulting both in-patients as well as out patient departments of internal medicine, surgery, obstetric and gynecology, pediatrics, dermatology, orthopedics, otorhinolaryngology, ophthalmology and subspecialities like cardiology, neurology, gastroenterology, urology, pulmonary and chest medicine were collected from the hospital pharmacy over a period of one month . The case sheets of patients were referred to if information about the drug was not clearly mentioned in the prescription. The prescribed fixed dose combination drugs and other drugs were categorized according to ATC classification. Descriptive statistics was used to analyze data. The percentage of FDCs used in each class and their contribution to overall FDCs were calculated. Data was compared with FDCs approved in WHO’s essential drug list and other countries.

In 1000 prescriptions, a total of 3151 drugs were prescribed. Of this, 960 were FDCs and 2191 were others. The highest percentage of FDCs were seen in nervous system (36.6%), anti-infective (33.67%), anti-neoplastic (31%), respiratory system (31%) and various drugs class (35.90%). The groupwise distribution of drugs, according to ATC classification and FDCs in that category, is given in the Table 1. Of the total 960 FDC prescriptions, majority were anti-infective agents for systemic use (17.5%), central nervous system (17.08%), cardiovascular system (15.41%) and alimentary system (11.14%) respectively as shown in the Table 2. Among drugs affecting the central nervous system, the most common FDC was a combination of ibuprofen and paracetamol (56.7%) followed by nimesulide and paracetamol (20.12%) as shown in the Figure 1. Levodopa and carbidopa combination constituted for 9.74% which was the only FDC approved in WHO’s essential drug list. In the anti-infective class of drugs, the most common FDCs prescribed were combinations of amoxicillin and clavulanic acid (53.57%), sulfamethoxazole and trimethoprim (17.85%) and isoniazid and rifampin (5.95%) which are approved by WHO. The rest of the FDCs used were approved by either DCGI (Drug Controller General of India) or the state drug statutory board shown in the Figure 2. 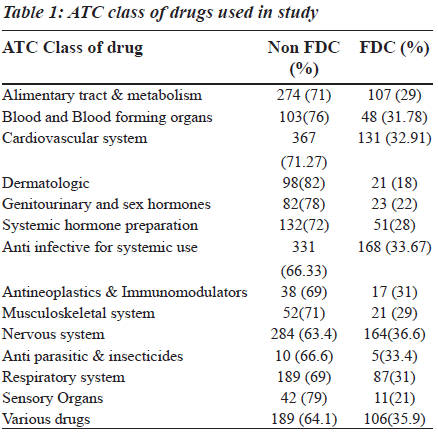 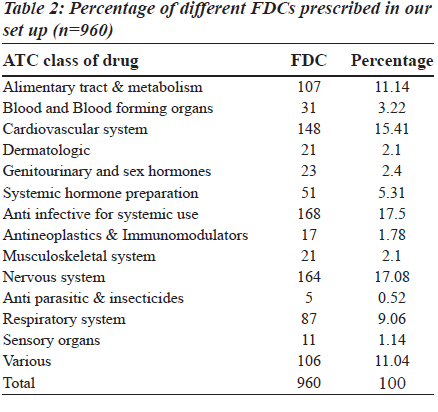 Table 2: Percentage of different FDCs prescribed in our set up (n=960) 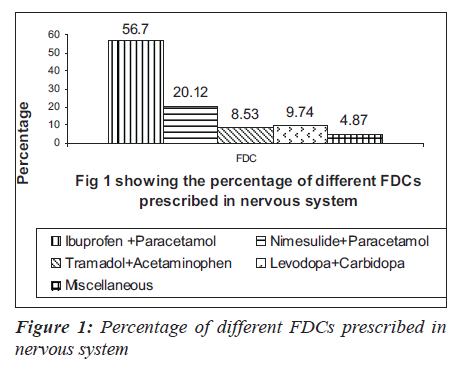 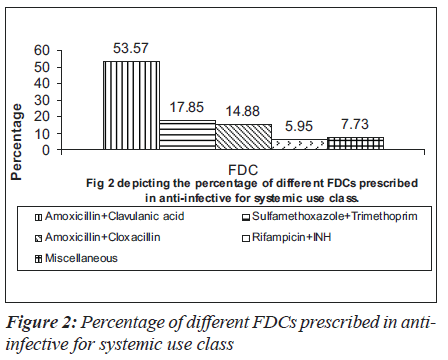 Figure 2: Percentage of different FDCs prescribed in antiinfective for systemic use class

Many anti-hypertensive FDCs were prescribed in our hospital. Among them were combinations of ramipril and hydrochlorothiazide (29.07%), losartan and hydrochlorothiazide (20.61%), amlodipine and atenolol (20.61%) and amlodipine and frusemide (12.2%) as depicted in Figure 3. The commonly prescribed FDCs for diseases of alimentary tract and metabolic disorders were milk of magnesia, liquid paraffin,pantoprazole and domperidone, glibenclamide and metformin [Figure 4]. Majority of the FDCs prescribed (73.25%) in our study were not approved in the WHO essential drug list [Figure 5]. 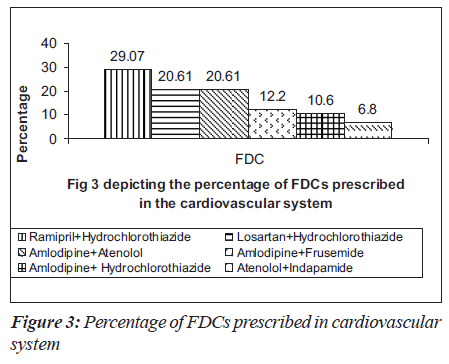 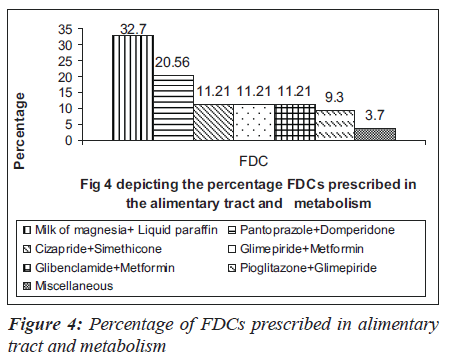 Figure 4: Percentage of FDCs prescribed in alimentary tract and metabolism 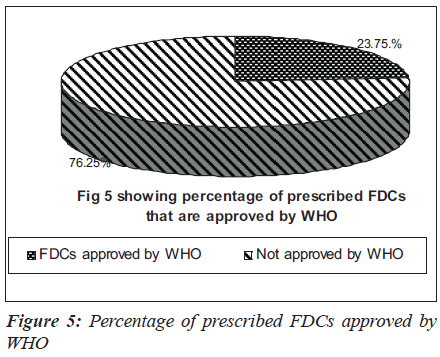 Figure 5: Percentage of prescribed FDCs approved by WHO

In this era, poly-pharmacy is very common in clinical practice adding to the complexity of individualization of drug therapy. There is an increasing tendency to combine drugs, more often without a sound rational basis for doing so.

The 15th list of essential medicines by WHO has only 25 FDCs, whereas there are currently 156 fixed dose combinations available in the Indian market after the withdrawal of 138 combinations recently [9]. There is confusion among physicians prescribing the drugs, since these are available in the market but not included in standard textbooks. There are only few published studies, available in literature, which addressed this scenario in India. Hence, the study was undertaken to focus on the growing concern in this field. The prescription pattern of FDCs in our study ranged from 18- 36.6%, in different classes of drugs, according to ATC classification. Among them, drugs affecting the nervous system and dermatologic system are the highest and lowest respectively, with an average prescription of 30.47% in our study [Table 1]. Major FDCs belonged to the nervous system, anti-infective agents used for systemic use, cardiovascular system and alimentary system respectively [Table 2]. The prescribing pattern of FDC in general is high (30.47%) when compared to western literature in which the average prescription of FDCs was 17, 25 and 20% in USA, Britain and Israel respectively (data has been taken from PDR 1997 in USA, BNF, 1997 and MEDIC, 1997, respectively). A similar trend is seen in individual groups [10]. Being a tertiary care service provider, there is a possibility of over prescription of such combinations as the last option. The high percentage of use of FDCs in our study could be due to the fact that Indian pharmaceutical industry revolves around marketing the new formulations rather than investing on research and development. This is partly due to the business strategy (less investment, more returns) and partly due to legal loopholes permitting the companies to thrive on this (lack of co-ordination between state regulatory agency and the DCGI) resulting in innumerable FDCs available in the market without any streamline approach. The monthly index of medical specialities published in June 2007 has mentioned 136 FDCs whose rationality is questionable [11]. The combinations prescribed in the nervous system, alimentary tract and metabolism, amoxicillin and cloxacillin combinations have been excluded from the WHO essential list.

Are we not responsible for this unscientific irrational combination? (If not all; at least quite significant proportions).The mudslugging game between pharmaceutical companies, health care professionals and regulatory authorities is going on, finally affecting the consumers. There should be a sound scientific basis to have FDCs which can be tailor-made according to local needs, thereby reducing adverse drug reactions, unnecessary hospitalization and financial burden substantially. By strictly minimizing and mentioning the approved FDCs in standard textbooks, physicians can clearly minimize the prescription of such drugs. Periodic studies highlighting FDC use at all levels should be encouraged and results should be publicized so that we can overcome this problem in the near future.

In conclusion, there is a clear over-prescription of FDCs in our set-up. This can be minimized by proper co-ordination and support from regulatory bodies, academicians and policy makers