This study aims to prepare a scaffold complex based on O-hydroxyethyl chitosan (O-HECS) for tissue engineering. The characteristics of the scaffold complex were investigated. Chitosan was made to react with ethylene oxide to obtain water-soluble O-HECS. Body-sealing tube polymerization was conducted with stannous octoate as the catalyst and water-soluble O-HECS as the initiator. D,Llactide ring-opening polymerization was stimulated to prepare water-soluble O-hydroxyethylchitosangrafted polylactic acid (O-HECS-g-PLA). This copolymer was characterized by X-ray diffraction, infrared spectroscopy, scanning electron microscopy and dissolution experiment. A water-soluble OHECS/ polylactic acid copolymer with increased performance was successfully prepared. Water-soluble O-HECS-g-PLA was obtained by chemical modification method. The copolymer has a good mesh structure and porosity and can be used as a drug eluting scaffold. In addition, this copolymer is soluble in certain common organic solvents, which is beneficial for further application in tissue engineering.

Chitosan (CS) is the deacetyl product of chitin and the only basic polysaccharide that is abundant in nature [1,2]. It has several advantages, such as non-toxicity, non-irritating and good biocompatibility and biodegradability. It can also promote the proliferation and differentiation of certain cells and accelerate tissue formation [3-5]. CS is commonly used in the preparation of medical polymeric materials, delayed-release drug agents and other materials [6]. However, the processing capability of CS is poor and difficult to adjust; its degradation is slow, thereby limiting its development and application [7]. Polylactic acid (PLA) is currently the most commonly used synthetic biopolymer because of its good biocompatibility, desirable mechanical properties, biodegradability and easy processing characteristic. However, PLA is a hydrophobic material [8,9] with poor cell affinity and insufficient functional groups; its degradation products are acidic and could cause an aseptic inflammation response in the body [10], which is not conducive to cell growth. If the advantages of CS and PLA are combined and their deficiencies resolved, the composite material could effectively improve the mechanical properties to a certain extent. The degradation rate of CS would increase, and the hydrophilicity and cell affinity of PLA could also be improved. The acidic degradation products could likewise be neutralized. Many studies have focused on this field. For instance, Feng and Dong [11] utilized phthaloyl CS to graft PLA. Luckachan and Pillai [12] utilized Ti(OBu)4 as the catalyst to synthesize the copolymers of CS and PLA. However, several problems remain. For example, the graft rate of copolymers is low, and the dissolubility of the product in a common organic solvent is not ideal. These problems are due to the high melting point of CS, in which the high-temperature processing causes the thermal decomposition of CS. The compatibility of CS and PLA is poor, resulting in the poor performance of the synthesized materials; the mechanical strength of these materials is reduced [13]. In the current study, the reactive hydroxyl group in CS was utilized to introduce the polar hydrophilic hydroxyethyl group into the CS structure. This procedure increased the water solubility of CS while maintaining the high molecular weight and high degree of deacetylation. Therefore, a neutral water-soluble O-hydroxyethyl CS (O-HECS) was obtained. D, L-lactide ring-opening polymerization was stimulated through body-sealing tube polymerization method with stannous octoate as the catalyst and soluble O-HECS as the macromolecular initiator to prepare a series of copolymers, such as CS-grafted PLA and water-soluble O-HECS-grafted PLA (O-HECS-g-PLA). The composition and structure of these copolymers were analyzed and characterized, focusing on the effects of CS hydroxyethylation on the copolymer grafting rate, structure and performance.

A total of 5.0 g CS (molecular weight of 300,000, 90.0% deacetylation; Sinopharm Chemical Reagent Co., Ltd., Shanghai, China) was added into a 250 ml three-neck boiling flask. The pH was adjusted between 12 and 14 with 5% KOH solution. The flask was connected to a reflux condenser, a thermometer and a stirrer and then placed in a water bath at 50°C to 70°C for 48 h to 72 h. When the temperature was increased to 60°C, a total of 11.0 ml aqueous solution of ethylene oxide (Sinopharm Chemical Reagent Co., Ltd., Shanghai, China) was added three times. The reaction was terminated when all the solids were dissolved (the mixture was milk-yellow in color). HCl (5%) was added dropwise into the reaction mixture to adjust the pH to 5 until the mixture became pale yellow in color, clear and transparent. A G3 core funnel was utilized to filter the mixture. The filtrate was concentrated and precipitated with ethanol (the concentrated filtrate was white jelly). The resulting solid was dissolved in distilled water after centrifugation. This process was repeated until no more insoluble solid was found. The final obtained solid was dissolved in water and dialyzed in a big dialysis bag with plenty of water. The dialysate was then lyophilized to obtain the desired final product, which is the resulting solid.

D, L-lactide (Shanghai Xitao Industry Co., Ltd., Shanghai, China) and water-soluble O-HECS were added in proportion into single-neck flask at the designed feeding ratio of 10:1, 20:1 and 40:1 for further comparison. Stannous octoate (Foshan Nanhai Jinjia Trade Co., Ltd., Foshan, China) was added at 1/1000 of monomer molar ratio of lactide. The flask was degassed to a vacuum condition and then sealed and placed in an oil heating bath at 130°C for 24 h continuous reaction under magnetic stirring. The resulting crude product was a brown polymer. Acetone was then added to the crude polymerized product. After full stirring, extraction and purification, the resulting solid was dried in a vacuum oven at 40°C. CS-grafted PLA (CS-g-PLA) was prepared through the same method.

Analysis of the product 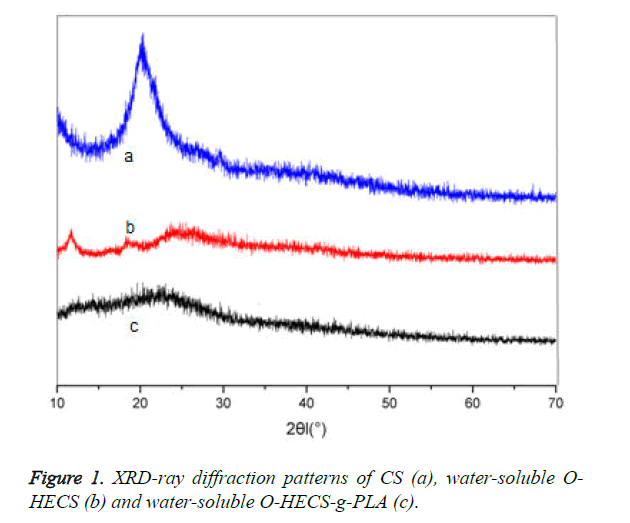 The characteristic diffraction peak of the hydroxyethyl group at was found at 2θ=12°, indicating that the hydroxyethyl group (- CH2-CH2-OH) was successfully introduced into the side chain of CS. The peak also indicates that after modification by the hydroxyethyl group, the intramolecular and intermolecular hydrogen bonds of CS were destroyed, causing a significant reduction in its crystallinity, whereas the solubility in water and organic solvents was improved. For the graft copolymer, a weak broad peak was found in the vicinity of 2θ=22.5°, indicating that the diffraction peak at 2θ was subjected to displacement after graft copolymerization. The introduction of PLA further weakened the intramolecular and intermolecular hydrogen bonds of water-soluble O-HECS. The diffraction peak at 2θ gradually weakened with the increase in the number of lactylate units because the introduction of longer PLA into the sugar ring of the graft copolymer results in greater damages to the regularity of the sugar ring structure; thus, crystallinity is reduced. 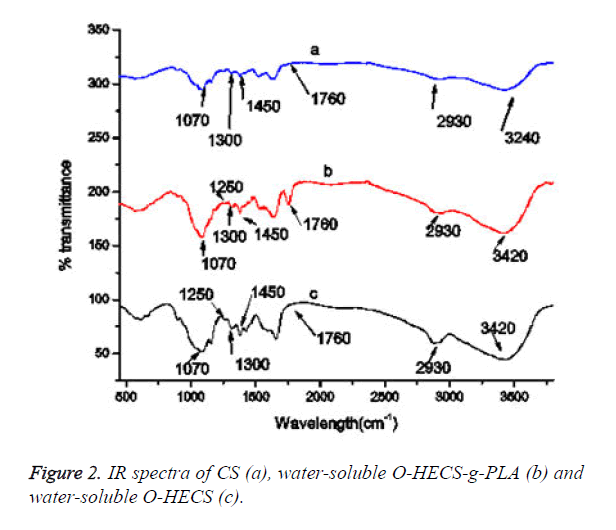 Comparison of the IR spectra of a, b and c revealed that the υ (C-O) band of the soluble O-HECS significantly changed and that a new peak appeared at 1250 cm-1 (-C-O-C-); the peak of methylene at 2930 cm-1 (-CH2-CH2-) was enhanced. Compared with CS and water-soluble O-HECS, the new stretching vibration absorption peak of C=O at 1760 cm-1 appeared in the copolymer, and the stretching vibration absorption peaks of -CO- C- appeared at 1250 and 1300 cm-1. The peak at 1450 cm-1 in Figure 2 is attributed to methyl asymmetric deformation and that at 1070 cm-1 corresponds to the C-CH3 stretching vibration.

Figure 3 shows the SEM image of the water-soluble O-HECS-g- PLA. The image clearly shows that the polymer has high porosity. The pore diameter is 150 μm to 300 μm, with a uniform distribution. A 3D plate-shaped structure was found among the pores. 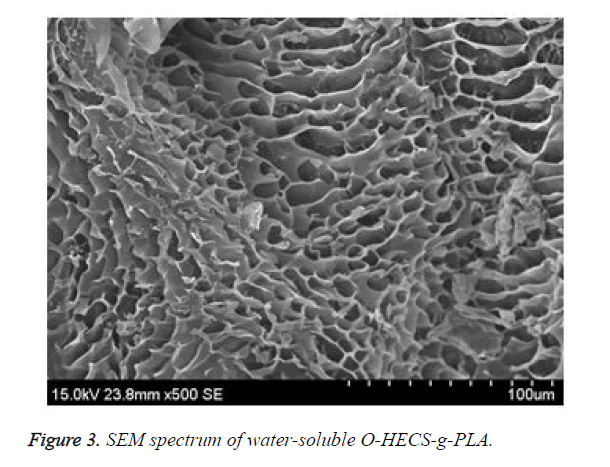 Results of the solubility experiment

Through the hydroxyethyl modification of CS and the use of ethylene oxide as a coupling agent, D,L-lactide was connected to the corresponding hydroxyl and amino groups in CS. Water-soluble O-HECS-g-PLA was then successfully prepared. The reaction conditions were investigated, and the water-soluble O-HECS- g-PLA was characterized and analyzed. Freeze-drying technology was employed during the preparation of the water-soluble O-HECS-g-PLA. Given that the materials were not affected by the surface tension of water, the product maintained its original shape and did not exhibit any deformation. Therefore, the physicochemical properties were retained and were unaffected by the experimental conditions. O-HECS-g- PLA was prepared by bulk polymerization; thus, the resulting product has good purity and electrical performance. The temperature was strictly controlled (130°C) in the reaction process, thereby reducing the decomposition of CS and increasing the yield and graft ratio. After preparing water-soluble O-HECS by the activation of CS with ethylene oxide, stannous octoate was used as the catalyst to synthesize the water-soluble O-HECS-g-PLA. The graft rate improved significantly and became three times higher than that before hydroxyethylation. This phenomenon could be due to intermolecular hydrogen bonding and stereo-specific blockade inside CS that caused low activity; the introduction of the hydroxyethyl group damaged the intermolecular hydrogen bonding and exposed the active sites on the sugar ring. The graft ratio improved significantly by increasing the feeding concentration of lactide. Therefore, control of the lactide content can effectively adjust the graft ratio of the product.

The XRD analysis shows that CS has high crystallinity. However, after modification with the hydroxyethyl group, crystallinity decreased significantly, which helped improve the solubility of CS in water and organic solvents. The crystallinity of the PLA grafting copolymer decreased, resulting in the significant improvement of the copolymer graft ratio and the solubility of the product in common organic solvents. The IR spectrum test shows that the hydroxyethyl modification of CS occurred at C6-OH. This result indicates that the hydroxyethyl group was grafted on the CS chain. A new C=O stretching vibration absorption peak was found at 1760 cm-1, and -C-O-C- peaks appeared at 1250 and 1300 cm-1. This finding indicates that the PLA side chain was successfully grafted on the sugar ring.

The SEM spectrum indicates that the polymer has high porosity and provides sufficient 3D space to repair the damages in the articular cartilage in tissue engineering. The polymer not only maintained the shape and phenotype of the cells growing on the bracket but also promoted cell adhesion, proliferation and even differentiation, thereby inducing tissue regeneration and providing a suitable external environment for cell growth [15-17]. Furthermore, the prepared water-soluble O-HECS-g-PLA has a connective hole shape and sufficient surface area, suitable surface physicochemical properties and good cellular interface. The pore size distribution is relatively close and uniform and can be processed into a desired 2D or 3D structure to provide sufficient space for extracellular matrix regeneration [18-20]. The dissolution performance experiment shows that water-soluble O-HECS-g-PLA exhibits good solubility. Such observation indicates that this product has good biological compatibility, which is very beneficial to its application in cartilage tissue engineering.

1. Ethylene oxide is toxic, flammable and explosive. The chemical property of stannous octoate is very unstable. Stannous octoate is easily oxidized and has toxic effects on the human body. For example, it affects the eyes, skin, mucosa and upper respiratory tract. The amount of residues of these two substances in the product could be determined as well as the damage they may cause to the body during metabolism and degradation. Further studies with long-term follow-up and observation during late cytotoxicity are recommended.

2. Given the limited experimental condition and equipment, other similar products were not produced for comparison in this study. Therefore, data on flexion, extension and impulse strength were not obtained. The performance of this product could not be fully evaluated; further confirmation is necessary.

3. The graft ratio of water-soluble O-HECS-g-PLA increased with the increase in the lactide content. Porosity and solubility also improved significantly. However, whether the mechanical properties and thermal performance were also improved requires further research.