Prenatal diagnosis of pentalogy of cantrell in a case with craniorachischisis

Pentalogy of Cantrell as the name suggests involves combination of five complex congenital anomalies affecting midline abdomen. It is a complex and rare congenital anomaly which in extreme condition is not compatible with life specially if associated with other complex anomalies. Herein we report an antenatal detection of such a case with associated cranioschisis. Through this case we would like to emphasize the importance of antenatal care and antenatal sonographic screening.

The pentalogy of Cantrell was first described by Cantrell et al in 1958, who reported 5 cases with this anomaly [1]. The findings included a lower sternum defect, a midline supraumblical thoracoabdominal wall defect, a defect of the anterior diaphragm, a defect of the diaphragmatic pericardium and congenital cardiac anomalies [1,2]. The pentalogy is associated with very poor prognosis and therefore the need for prenatal diagnosis arises [3,4]. The overall prognosis and survival depends on extent of the ventral wall, sternal and cardiac defects. But when there is association of anomalies of central nervous system, the prognosis may become even poorer. Association of craniorachischisis to the pentalogy of Cantrell is extremely rare and has been reported in very few cases. In this report we describe a case of Pentalogy of Cantrell with craniorachischisis.

A 30 year old pregnant woman came for routine antenatal ultrasonography at around 19 weeks’ menstrual age. Transabdominal sonography was performed which revealed a single live fetus with femur length of 19 wks corresponding to the menstrual age. Gastroschisis with herniation of liver and ectopia cordis were seen (Figures 1a and 1b). The other sonographic findings were spinal dysraphism and exencephaly (Figure 1c); however there was no polyhydramnios and the facial structures were normal with no evidence of cleft lip or palate. On the basis of sonographic findings; we diagnosed the case with the rare disorder of fetus with pentalogy of Cantrell with craniorachischisis. The diagnosis was discussed with the parents and the prognosis was explained to them. The pregnancy was terminated and a male fetus was delivered. Ectopiacordis, gastroschisis with herniation of liver, lower sternal defect and exencephaly were observed in the expelled fetus.

The Pentalogy of Cantrell is an extremely rare phenomenon with a prevalence of about 1 per 65000 live births and classified as a developmental defect of midline anterior thoracoabdominal wall [2,4-6]. It is thought to result from an abnormal migration of the sternal anlage and myotomes in the early 6th to 7th week of gestation however the exact pathology behind is still not very clear but mutation of TAS gene, is mentioned in some of the previous studies [3]. The classical pentalogy of Cantrell that was first described by Cantrell et al1 in 1958 had five features: Midline supraumbilical thoraco-abdominal wall defect; lower sternal defect; anterior diaphragmatic defect; diaphragmatic pericardial defect, ectopia cordis and intracardiac anomalies [2,7].Till now there have been few case reports describing the full spectrum having all of the five defects. Incomplete forms or variants with lesser number of defects of the pentalogy are more common. However a confident diagnosis can be made on the basis of the sonographic diagnosis of anterior abdominal wall defect and ectopia cordis which are the hallmark4of this rare syndrome [8-10].

Previous case reports show association of this syndrome with limb anomalies, craniofacial anomalies (cleft lip, cleft palate, hydrocephalus), vertebral anomalies; cystic hygroma. Cardiac anomalies consist of ventricular septal defect (in 100% of cases), atrial septal defect (52%), pulmonary stenosis (33%) and Tetralogy of Fallot (20%) [2,5]. Our case is a variant of pentalogy of Cantrell as it lacked any gross intracardiac defects however presence of exencephaly with spinal dysraphism makes our case one of the rarest. In addition our case is associated with gastroschisis not omphalocele. Exencephaly is characterized by absence of bony calvarium. Craniorachischisis is due to complete failure of the neurulation process and characterized by open cranial defect (anencephaly or exencephaly) continuing with the open spine (spinal dysraphism) [2,6,11]. However our case was not associated with polyhydramnios. 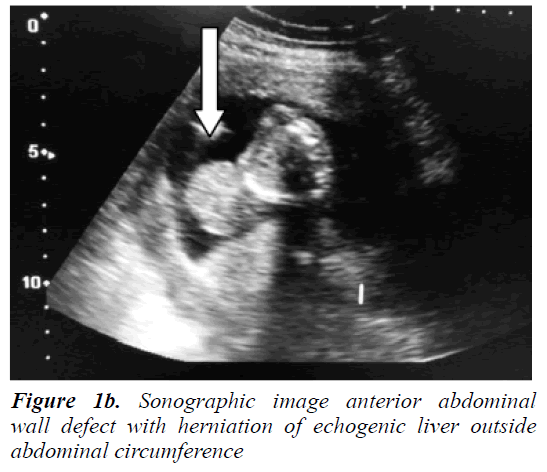 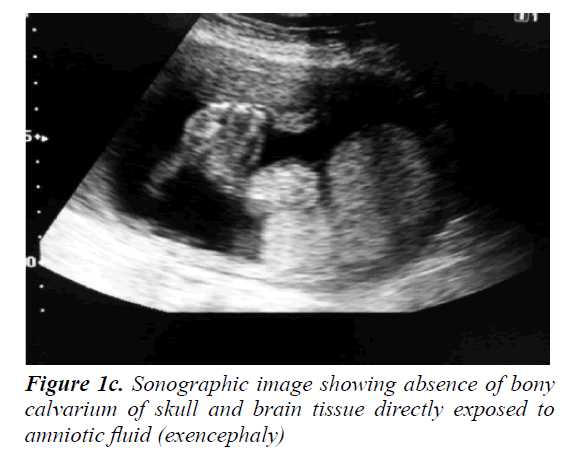 The prognosis depends on the severity of the anomalies. The prognosis is poorer in patients with the complete form of pentalogy of Cantrell and in cases with other associated anomalies. Remarkably intracardiac defects do not seem to affect prognosis much.

Pentalogy of Cantrell (PC) is a congenital malformation syndrome resulting from defective development of the septum transversum and presents as midline thoracoabdominal wall defect. Our case of the pentalogy of Cantrell is interesting and rare because the fetus having herniation of liver and ectopia cordis and associated spinal dysraphism and exencephaly had rarely been reported in association with this syndrome. Through this case we underline the importance of antenatal sonography for general population and also for the ultrasonologist for keeping in mind the possibility of associated dorsal abnormalities in a patient with large ventral anomaly.