Heart attack disease is major cause of death anywhere in world. Data mining play an important role in health care industry to enable health systems to properly use the data and analytics to identify impotence that improves care with reduce costs. One of data mining technique as classification is a supervised learning used to accurately predict the target class for each case in the data. Heart disease classification involves identifying healthy and sick individuals. Linear classifier as a Naive Bayes (NB) is relatively stable with respect to small variation or changes in training data. Particle Swarm Optimization (PSO) is an efficient evolutionary computation technique which selects the most optimum features which contribute more to the result which reduces the computation time and increases the accuracy. Experimental result shows that the proposed model with PSO as feature selection increases the predictive accuracy of the Naive Bayes to classify heart disease.

Angina, chest pain and heart attack are the symptoms of Coronary Heart Disease (CHD), Cardiovascular Diseases (CVDs) elucidated around one fourth of all deaths in India in 2008. In India, there could be 30 million CHD patients out of which 14 million are in urban and 16 million in rural areas. [1]. The heart attack increases due to smoking, lack of exercises, high blood pressure, high cholesterol, improper diet, high sugar levels etc. [2]. Early detection and treatment can keep heart disease from getting worse.

In the past few decades, medical data mining have played a important role to explore the hidden patterns which can be used for clinical diagnosis of any disease dataset [3].

Classification is one of the data mining technique to classify the patient class as normal or heart disease but classification use all attributes either relevant or irrelevant features which may reduce the classification performance. Feature subset selection is one of the dimensionality reduction techniques use to improve the accuracy. Particle swarm optimization is a feature selection technique which removes the redundant features to improve the classifier performance.

Rupali et al. [6] decision support in Heart Disease Prediction System (HDPS) is developed by using both Naive Bayesian Classification and Jelinek-Mercer smoothing technique. This Laplace smoothing is use to make an approximating function which attempts to capture important patterns in the data to avoid noise & accuracy is 86%.

This section provides the basic concepts of classifier as Naive Bayes and feature subset selection method as PSO.

PSO is an Evolutionary Computation technique is proposed by Kennedy et al. in 1995 [8]. PSO is motivated by social behaviors such as bird flocking and fish schooling. In PSO population swarm consists of “n” particles, and the position of each particle stands for the potential solution in D-dimensional space. The particles change its condition based on three aspects: (1) To keep its inertia; (2) To change the condition according to its most optimist position; (3) To change the condition according to the swarm’s most optimist position.

In PSO [9], a population are encoded as particles in the search space dimensionality D.PSO starts with the random initialisation of a population of particles. Based on the best experience of one particle (pbest) and its neighbouring particles (gbest), PSO searches for the optimal solution by updating the velocity and the position of each particle; PSO is used as feature subset selection method due to its advantages:

• Simple and easy to implement.

It is a process of removing the irrelevant and redundant features from dataset based on evaluation criterion which is use to improve accuracy. There are two approaches as individual evaluation and other one is subset evaluation.

In this paper, we propose a model which uses Naive Bayes as classifier and PSO as Feature subset selection measure for prediction of heart disease.

In this section, we propose a methodology to improve the performance of Bayesian classifier for prediction of heart disease. Algorithm for our proposed model is shown below:

Output: Classify patient dataset into heart disease or not (normal).

Step 3: Remove the features with low value of PSO.

The above algorithm divided into two sections, section 1 (step 2 and step 3) performs processing and feature subset selection. In section 2 (step 4 and step 5) Naive Bayes is applied on relevant features data and evaluate the performance in terms of accuracy.

In the proposed method, the accuracy of Naive Bayes classifier is improved by using the particle swarm optimization as feature selection. The dataset that is being used in the process contains the following 14 features including 1 class label and 270 instances with no missing values data collected from Statlog (heart) data set UCI repository which is balanced [12,13]. Here presence or absence of heart disease is predicted on the basis of age, sex, chest pain type, resting blood pressure, serum cholesterol, fasting blood sugar, resting electrocardiographic results, maximum heart rate achieved, exercise induced angina and old peak etc. which are given as follows (Table 1).

Open source statistical tool R with caret and PSO package used; for prediction. PSO searches out of 14, selects 7 featurescp, Restecg, Thalach, Exang, Old peak, Ca, Thal with 1 class. Result of proposed approach for various PSO search iteration as shown in Table 2 and Figure 1. In PSO optimization process, the result is obtained on convergence no. of iterations can be stopped if negligible deviation in convergence results. For example accuracy 87.91% recorded at max no. of iterations=100 as shown in Table 2. 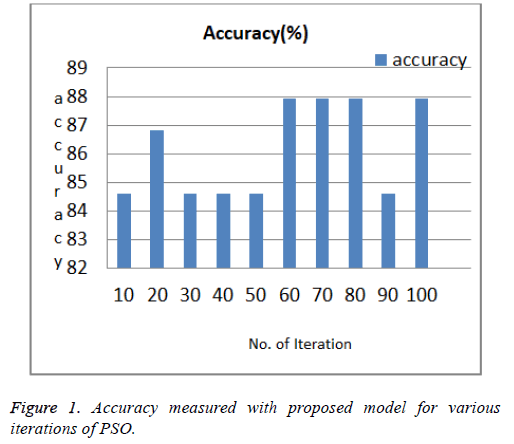 Comparison of other model with our proposed model as shown in Table 3 and Figure 2; our approach improves the accuracy which helps the doctor to advice the patient for further diagnosis process. 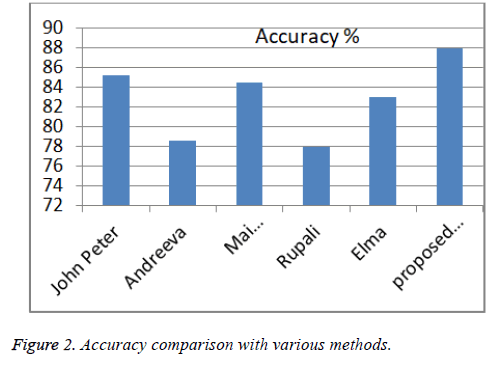 It concluded that the proposed model is effective and efficient to improve the accuracy of the Naive Bayes classifier using the particle swarm optimization for feature subset selection which achieves similar or even better classification performance. The goal was successfully achieved by developing a novel algorithm maximizing the classification performance and minimizing the number of features. From simulation results, it analysed that this algorithm could automatically evolve a feature subset selection with a less number of features and increase classification performance than using all the features of a dataset. In the future, we want develop recommendation system for early prediction of heart disease diagnosis. Also the use of PSO for feature selection on datasets with a huge number of features can also be studied to note the various aspects of PSO in feature selection.