PPAR expression and its association with SOD and NF-?B in rats with obstructive jaundice

There are three main PPAR isoforms, including PPARα, PPARβ/δ and PPARγ [3]. Among these isoforms, PPARα and PPARγ have been the most extensively investigated and found to be the molecular targets of hypolipidemic fibrates and anti-diabetic thiazolidinediones. PPARα is mainly expressed in the liver. Its expression is upregulated by the starvation state, and it helps provide energy through regulating multiple genes involved in fatty acid mobilization, activation and degradation. PPARα- mediated events negatively regulate lipid metabolism. In contrast, PPARγ expression is localized mainly to adipose tissue. Under physiological conditions, PPARγ expression is activated after eating, promoting fat accumulation in adipose tissue.Its target genes include adipocyte fatty acid binding protein (A-FABP, or aP2), phosphoenolpyruvate carboxykinase (PEPCK), lipoprotein lipase (LPL), fatty acid transport protein (FATP), and fatty acid transporters (FAT) [4].

Our previous study showed that lipid peroxidation was involved in organ damage induced by obstructive jaundice. Synthesis of the antioxidant enzyme, super oxide dismutase (SOD), was significantly decreased while proinflammatory cytokines including TNF-α were significantly increased during obstructive jaundice, showing a negative correlation [8-10]. Furthermore, the peroxisomeproliferator responsive element (PPRE) and NF-κB response element have been found in the promoter region of the superoxide dismutase (SOD) gene [9]. PPARs may act the protective effects against the obstructive jaundiceinduced liver damage by regulating gene transcription. Therefore, we investigated whether PPARs regulate the transcription of SOD and/or NF-κB in liver during the pathogenesis and progression of obstructive jaundice.

Healthy adult Sprague-Dawley rats (n = 120, 50% female and 50% male, body weight = 200-250 g) were provided by Experimental Animal Center of Dalian Medical University. The animals were bred and maintained in a pathogen- free environment with free access to laboratory chow and sterilized water. The rats were divided into four groups using a simple randomized grouping method (n = 30 for each group): sham operated for 7 days (Sham 7), bile duct ligation (BDL) 7 days post-surgery (BDL 7), sham 19 days post-surgery (Sham 19), and BDL 19 days post-surgery (BDL 19). The obstructive jaundice model in rats was established as previously described [12]. In brief, all the rats were deprived of food and water 4 hours before operation, and then those in the treatment group were anesthetized with ether and restrained. Laparotomy was performed from the middle of the upper abdomen under the xiphoid, exposing the hepatic portal, the hepatic bile duct was isolated, and the common bile duct was double ligated near the liver with #1 line and transected between the two ligatures. Only bile duct separation was performed on the rats in the sham group. Rats were sacrificed and blood samples and livers were collected immediately at 7 days and 19 days post-surgery. Part of the fresh livers were fixed and preserved in formalin for hematoxylin and eosin (HE) staining and immunohistochemistry (IHC), and the rest of the livers were stored at -80°C for molecular analysis.

HE staining of liver tissue

After rinsing in ice-cold saline, fresh liver tissues were dried, weighed (0.25 g), cut into pieces and then homogenized using 2.25 g ice-cold saline by manual control. The homogenates were centrifuged at 3000 x g for 15 minutes, and supernatants were diluted with distilled water (1:9), yielding a panel of liver tissue homogenates at a concentration of 1 %. SOD was determined by the colorimetric method (Nanjing Jiancheng Bioengineering Institute Nanjing, China) following the manufacturer’s instructions [15].

PPAR detection in liver by RT-PCR

In order to induce obstructive jaundice in a rat model, hepatic ligation surgery was performed. Cystic dilation of the common bile duct associated with the liver and accumulation of bile in this area was observed at 7 days and 19 days post-surgery. Livers were brown in color and diffuse swelling was found in obstructive jaundice rats (Figure 1). In the BDL 7 group, intrahepatic biliary dilatation, hepatocyte swelling, vacuolar degeneration, and focal necrosis were found upon pathological examination of tissue sections (data not shown). Furthermore, fibrous tissue and new bile duct hyperplasia were also found in the portal area (data not shown). In the BDL 19 group, a wide range of hepatocyte degeneration, necrosis, inflammatory cell infiltration, and lobular morphology disorder were observed around the portal area. The rats that did not meet the characteristics of obstructive jaundice in gross observation, biochemical testing and pathological examination were excluded from this study (Table 2). Furthermore, serum levels of total bilirubin (TB), direct bilirubin (DB) and alanine aminotransferase (ALT) in the BDL 7 and BDL 19 groups were significantly higher than the sham group (P < 0.01, Table 3), indicating defective liver function. In addition, total liver super oxide dismutase (SOD) and Cu/Zn-SOD activity was significantly reduced in both the BDL 7 and the BDL 19 groups compared with the sham group (P < 0.01, Table 4). Total liver SOD and Cu/Zn-SOD activity decreased with time after surgery (P < 0.01, Table 4, compare 7 days versus 19 days postsurgery).

Figure 1. (A) Rats display characteristics of obstructive jaundice post-surgery and (B) a sham animal for comparison. Gross dissection of rats at 7 days (left panel) and 19 days (right panel) after operation. Livers were brown in color and diffuse swelling was observed.

Table 2. The actual number of rats in each group

PPAR mRNA and protein expression is downregulated over time post-surgery 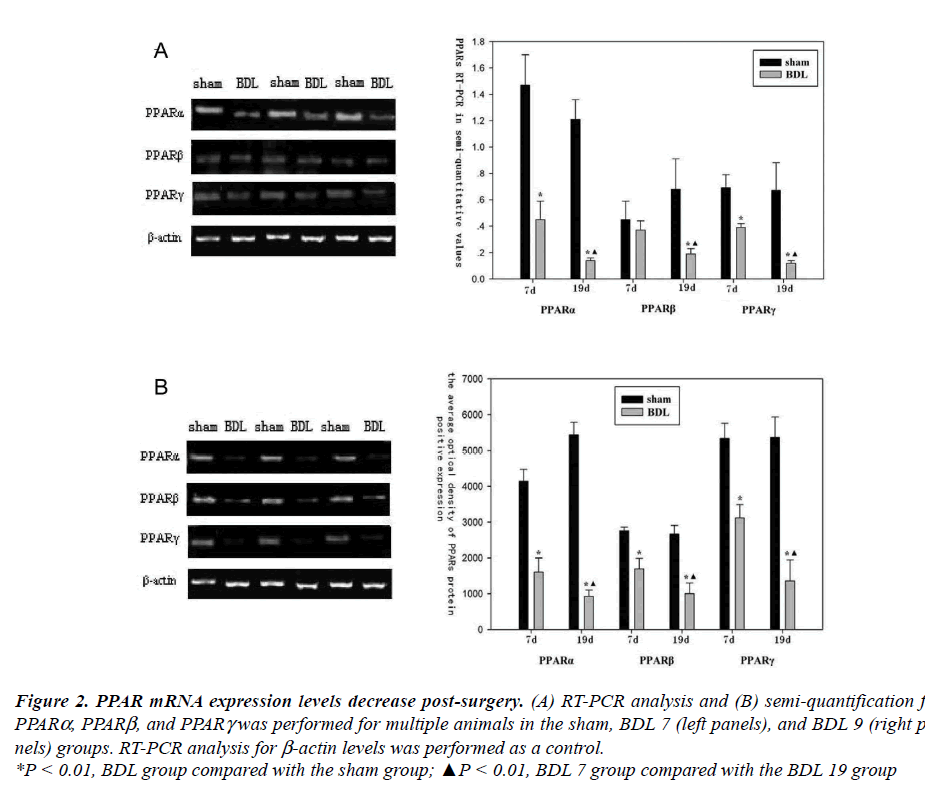 NF-κB p65 expression is increased post-surgery(Table 5) As a NF-κB response element is found within the promoter region of SOD we examined whether NF-κB p65 protein levels are regulated post-surgery by IHC analysis. NF-κB p65 protein expression was not observed or weakly positive in liver tissue of the sham group animals. Enhanced cytoplasmic staining (brown) and visible nuclear staining were seen in the BDL 7 group, and the average optical density of positive expression was higher than that of the sham group (P < 0.01, Figure 4). Moreover, the amount of positive staining per cell and the average number of positive cells was significantly increased in the liver of BDL 19 group animals compared to animals from the BDL 7 group (P < 0.01, Figure 4). 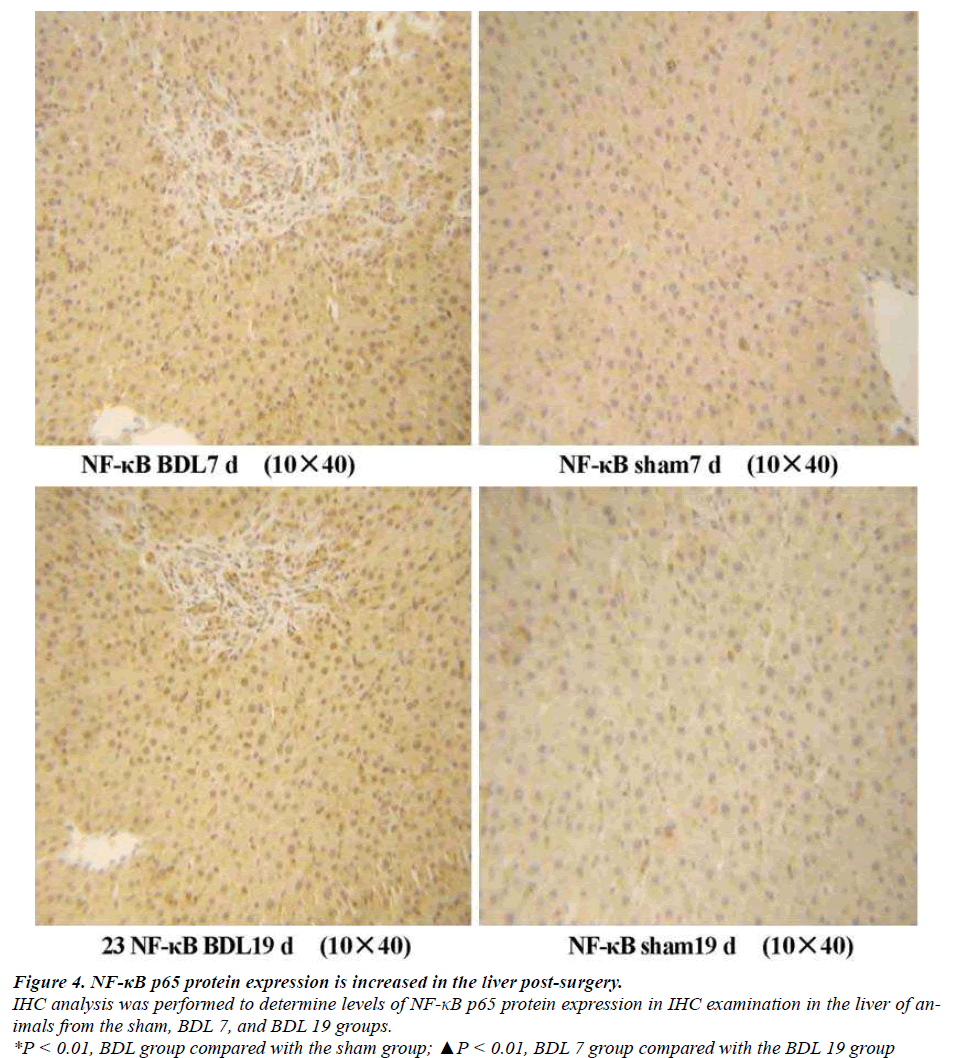 Figure 4. NF-κB p65 protein expression is increased in the liver post-surgery.
IHC analysis was performed to determine levels of NF-κB p65 protein expression in IHC examination in the liver of animals from the sham, BDL 7, and BDL 19 groups.
*P < 0.01, BDL group compared with the sham group; ▲P < 0.01, BDL 7 group compared with the BDL 19 group

The results presented here show that total SOD and Cu/Zn-SOD activity were decreased significantly in the liver of rats with obstructive jaundice, decreasing the total anti-oxidant capacity and leading to lipid peroxidationinduced damage of the liver. Thus, if the upstream regulatory factors for SOD can be found, it may provide new insight for correcting the imbalance between free radical generation and scavenging in obstructive jaundice in order to protect organ function. Toyoma et al. found that PPARα ligand agonist, Wy-14643, and fenofibrate were able to reduce peroxide damage by antagonizing catalase inhibition in liver damage [18]. Moreover, a PPRE sequence has been identified upstream of the rat Cu/Zn- SOD promoter, and PPARα and PPARγ agonists significantly increase the expression of Cu/Zn-SOD, thereby enhancing oxygen free radical scavenging [19]. Therefore, PPARs may play a role in protection against obstructive jaundice via regulation of SOD expression. Furthermore, IHC examination determined that NF-κB expression in both the BDL 7 and BDL 19 groups was significantly increased. The BDL 19 group showed even significantly increased expression and more pronounced nuclear translocation, suggesting that a large number of reactive oxygen species (ROS) accumulated in the rats with obstructive jaundice thereby inducing the expression and translocation of NF-κB. Activated NF-κB may subsequently promote liver damage via upregulation of a variety of pro-inflammatory factors, such as TNF-α, IL-1 and IL-6 [20-22].

The main physiological role of PPARs is to transform various environmental, nutritional or inflammatory stimuli into intracellular signals that regulate lipid metabolism, cell proliferation and differentiation [1,23]. A number of natural and synthetic PPAR ligands, including fatty acid and its derivatives, have been found in the past years, which has opened up new prospects for understanding the role of PPARs in the control of energy metabolism and inflammation [21]. The current study presented here shows that liver function is significantly impaired and the mRNA and protein expression of PPARs in the liver are reduced in obstructive jaundice rats. These data indicate that PPARs may play a fundamental role in the attenuation of liver damage in obstructive jaundice. The reason for low expression of PPARs in the livers of rats with obstructive jaundice may be the result of lipid peroxidation through ROS accumulation and reduction of PPAR ligands, such as unsaturated fatty acids.

In conclusion, PPARs may play a role in liver damage in rats with obstructive jaundice through regulation of SOD and NF-κB gene expression.