Objective: In our specialist vertigo center, patients with vertigo of sudden onset and rapid recovery (within 24 hour), which we call “idiopathic transient vestibulopathy’ (ITV), are not uncommon. The present study aimed to clarify the underlying mechanism(s) of ITV.

Methods: Consecutive ITV patients (n=39) who attended the Vertigo Center of Toho University Sakura Hospital were enrolled with a control group of 64 consecutive patients with vestibular neuritis (VN). At their visit, a caloric test and carotid ultrasonography (CUS) were performed.

Vertigo is defined as a rotational sensation associated with nystagmus and often accompanied by nausea and vomiting, and somatic instability such as gait disturbance [1]. In patients with vertigo that occurs suddenly and subsides rapidly (within 24 hour) the caloric test, a vestibular dysfunction test, is generally negative. Because its underlying disease is poorly understood, and does not satisfy the criteria of vestibular neuritis (VN), in which vertigo continues for more than 24 hour, the caloric test is positive, and steroid therapy is usually effective [2-4], in our specialist vertigo center we arbitrarily called this type of vertigo “idiopathic transient vestibulopathy” (ITV). There are a number of diseases that cause vertigo (i.e., vestibular nerve disease, regional and systemic circulatory diseases that cause vestibular ischemia, cerebrocerebellar disease, and so on) [5-7]. The underlying diseases for other than ITV are well known, but that for ITV is poorly understood.

In ophthalmologic diseases, there is a symptom known as “amaurosis fugax”, which is characterized by abrupt but transient loss of unilateral or bilateral vision. Amaurosis fugax is often caused by occlusion of the retinal artery or its mother artery by microemboli originating from the carotid artery, heart, aortic arch or cerebral arteries [8,9]. Of these, the carotid artery is considered to be the most important source of the emboli [9]. Because ITV and amaurosis fugax resemble each other in their abrupt onset and transient nature, there is a possibility that ITV is caused by transient blood flow disturbance in the vestibular artery caused by microemboli originating mainly from the carotid artery with resultant vestibular ischemia and dysfunction. Therefore, in the present study we used ultrasonography to examine the relationship between ITV and the characteristics of carotid artery plaque.

This retrospective study was performed in the Department of Otorhinolaryngology, Toho University Sakura Hospital. Because routine clinical examinations were used for the diagnosis of vertigo and its underlying diseases, approval by the Ethical Committee of Toho University for the present study was not required. Informed consent on the use of the clinical data was given by all patients enrolled in the present study.

Arbitrary Definitions of ITV and VN

There were 8228 consecutive patients with vertigo who visited the emergency room or vertigo center of Toho University Sakura Hospital between December 2008 and March 2015. Of them, 39 patients were diagnosed as ITV and 64 as VN by the arbitrary criteria shown in (Table 1). The clinical characteristics of the ITV and VN patients are shown in (Table 2). A caloric test was performed at first visit (2.35 ± 1.83 days after the onset of ITV, and 2.71 ± 1.71 days with VN), followed by carotid ultrasonography, and magnetic resonance imaging (MRI) and angiography (MRA) of the brain. For the present retrospective study, medical records were reviewed to determine clinical presentation, caloric test results, carotid ultrasonographic results, treatment and recovery. The patients with acute cerebrocerebellar infarction or significant cerebral arterial stenosis were excluded.

Carotid ultrasonography: An ultrasonic apparatus (Ascendus XG, Hitachi Co, Tokyo, Japan) was used for the present study. The obtained records were analyzed and the plaque morphology was classified independently by two observers who did not participate in the carotid ultrasonographic study and did not know the purpose of analysis but were specialists in vascular ultrasonography.

The following parameters were analyzed by the observers

(1) Intima–media thickness (IMT): The distance between the luminal surface and the internal elastic lamina. Plaque was defined as IMT>1.1.

(2) Plaque score: Thickest IMT in the proximal and distal segments of the common carotid artery, bifurcation and internal carotid artery was measured and the sum was calculated. The average value of the sum of the IMT of the left and right carotid arteries was called the “plaque score”.

(3) Carotid stenosis: IMT on both sides and the distance between the internal elastic laminae ≥ 0.50 was determined as significant stenosis and expressed as percentage (%) stenosis.

The obtained data were expressed as mean ± SD and were analyzed by Fisher’s exact test or Mann- Whitney U-test. The value of p<0.05 was considered statistically significant.

The severity of vestibular dysfunction assessed by caloric test was severe in the majority of VN patients, but absent in the majority and mild to moderate in a small number of ITV patients (Figure 1). 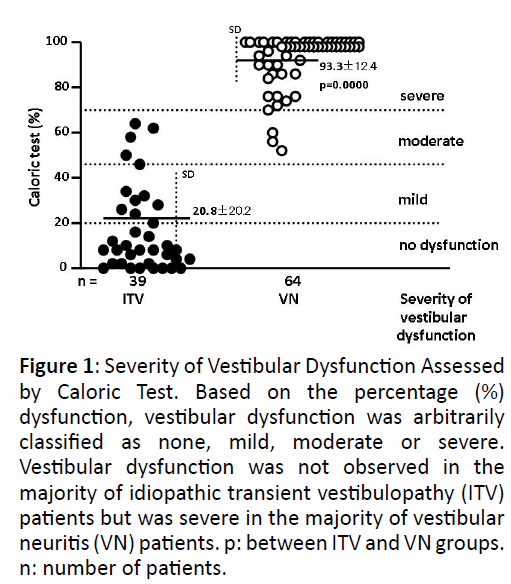 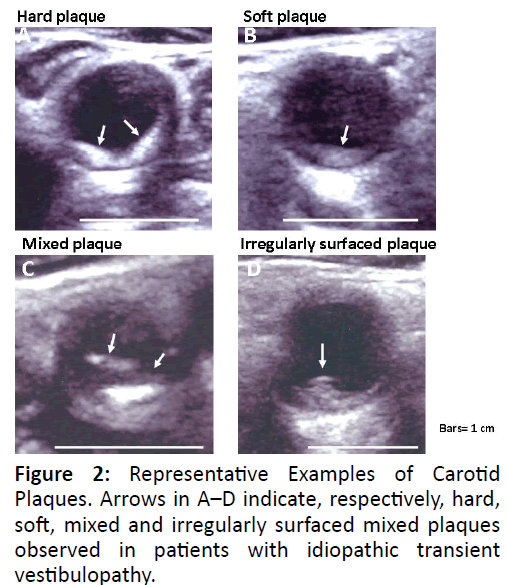 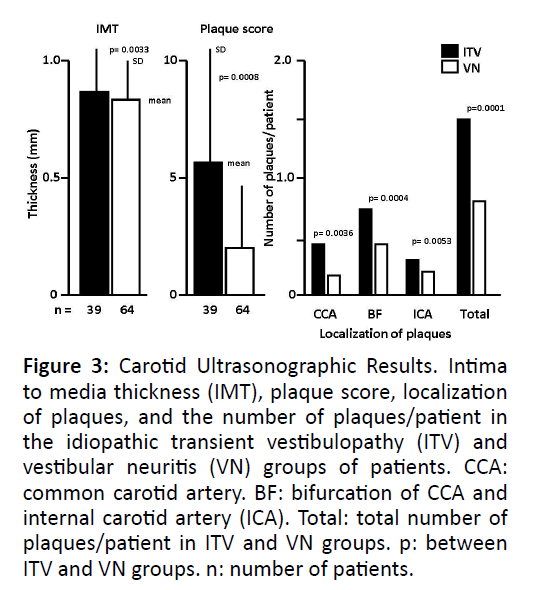 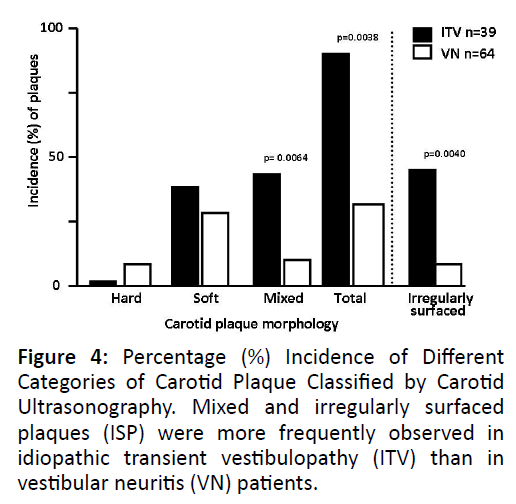 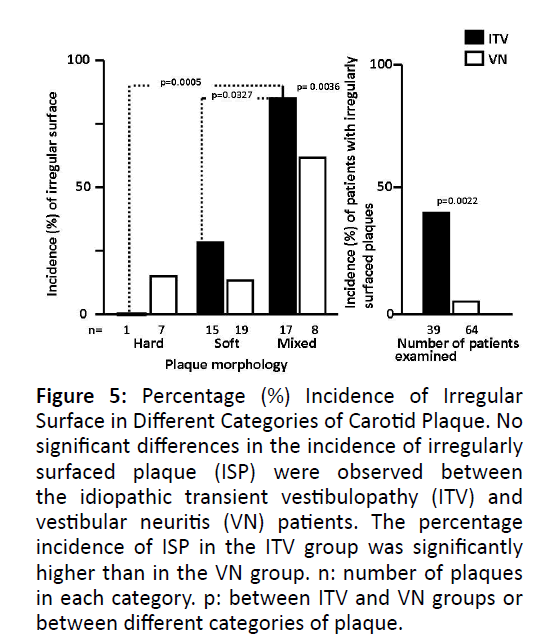 Figure 5: Percentage (%) Incidence of Irregular Surface in Different Categories of Carotid Plaque. No significant differences in the incidence of irregularly surfaced plaque (ISP) were observed between the idiopathic transient vestibulopathy (ITV) and vestibular neuritis (VN) patients. The percentage incidence of ISP in the ITV group was significantly higher than in the VN group. n: number of plaques in each category. p: between ITV and VN groups or between different categories of plaque.

Possible Participation of ISP in ITV

In the present study, the incidence of soft plaque in the ITV group was significantly higher than in the VN group. Although this type of plaque is more vulnerable to disruption, but it does not mean that it is the source of thromboemboli. ISP was more frequently observed in the mixed plaque group in the present study. ISP is a risk factor for ischemic cerebral events [13]. In the present study, the incidence of ISP in ITV patients was significantly higher than in those with VN. In ischemic heart disease, ISP is a feature of so-called complex plaques and represents disruption, ulcer or fissure [14,15]. Thin mural thrombi attached to ISP are frequently detected by percutaneous angioscopy [16] and similarly, ISP represents ulcer, fissure or disruption [17]. Participation of ISP in amaurosis fugax has been reported [18]. Although not visualized by ultrasonography in the present study, there is the possibility of thin mural thrombi on the ISP and that microthrombi detached from the ISP flowed into the arteries that irrigate the vestibulum, causing transient ischemia, leading to vestibular nerve dysfunction and resultant vertigo in ITV patients. Emboli from the heart lodge selectively in the anterior vestibular artery, causing vertigo, nausea, vomiting and postural instability [19].

Reason for High Incidence of ISP in ITV Patients

Reason for Rapid Recovery of Vertigo in ITV Patients

Severe cerebrovascular events are frequently associated with significant carotid artery stenosis, and symptoms often persist [19,20]. When the microemboli are small and sufficient blood flow is maintained because of the absence of severe carotid stenosis, the emboli are rapidly washed out or lysed, with resultant transient vestibular ischemia, dysfunction and vertigo, and their rapid resolution. This process might be an underlying mechanism of ITV, similar to the rapid recovery from vision loss in patients with amaurosis fugax.

Carotid plaque participates in transient ischemic attacks [20] and carotid plaque-related amaurosis fugax develops alone or with cerebral events [21-23]. Vestibular dysfunction presenting as vertigo also develops alone or with cerebral events [24]. It is probable that the size of the emboli and blood flow are the determinants of the arteries to be occluded and accordingly the territory of ischemia; small emboli occlude the vestibular artery but those occluding small cerebral arterial branches does not manifest symptoms depending on the irrigating territory, whereas large emboli cannot enter small-diameter arteries such as the vestibular artery and therefore obstruct the larger arteries that irrigate the brain and cause cerebral or cerebellar symptoms; in the case of a mixture of large and small emboli, both cerebral and vestibular arteries are involved and both cerebral or cerebellar symptoms and vertigo may develop.

Mild to moderate but not severe vestibular dysfunction was observed in a small number of ITV patients who recovered within 24 hour, possibly because of early performance of the caloric test or a relative delay of recovery from vestibular dysfunction, although involvement of VN could not be denied.

Cerebral events are often associated with heart disease (valvular disease, atrial fibrillation, patent foramen ovale, etc.) [25,26], aortic arch plaques [27], and atherosclerosis or spasm of the intracranial arteries. It remains to be elucidated whether these diseases are the source of thromboemboli in the patients with ITV without ISP in the carotid arterial tree.

VN patients are usually treated with corticosteroids, often with favorable results [28]. In contrast, the present retrospective study suggested the effectiveness of antiplatelet therapy in preventing recurrence in ITV patients.

Microemboli originating from carotid plaques were strongly suspected as a cause of ITV, but direct evidence that supports microemboli flowing from the ISP into the vestibular artery and occluding it is lacking. By visualizing microemboli flowing through the carotid or cerebral artery, known as “highintensity transient signals [29,30],” whether or not this possibility is true could be determined. The patient populations were not age-matched. Further studies by matching age are required to clarify that ISP is frequent in ITV patients.

The underlying mechanism(s) of vertigo that develops suddenly and subsids within 24 h (i.e., ITV) was examined in 39 consecutive patients, using 64 patients with VN as a control group. Vestibular dysfunction assessed by caloric test was absent or mild in the majority of ITV patients but severe in the majority of VN patients. By carotid ultrasonography, the incidence of ISP, which often represents ulcer, fissure or previous disruption, was high. The results suggested microemboli from these plaques caused transient vestibular nerve ischemia and dysfunction leading to ITV in at least one-third to half of the ITV patients.