Nitric Oxide (NO) plays a critical role in a variety of physiological processes including in platelet inhibition, blood pressure homeostasis, neurotransmission, immune responses, and inflammation which is well-known as many pathophysiological conditions in response to the tissue injuries and host defense against the invading microbes [1,2]. Macrophages are the main pro-inflammatory cells responsible for invading pathogens resulted from releasing many proinflammatory molecules, especially the free radical NO. The aberrant release of NO has been reported to cause the amplification of inflammation and the tissue injury [3]. Therefore, the pharmacological interference in NO production is a promising chemotherapeutic strategy to regulate the potentially harmful pro-inflammatory activity of macrophages. Although many anti-inflammatory agents have been investigated [4-8], there still remains a large demand for developing new and effective ones.

A recent study has provided the mechanisms behind the action of natural antioxidants on the inhibition of NO production [9]. Plants are considered to be a good source of natural antioxidant molecules especially vitamins, terpenoids, phenolic compounds, tannins, flavonoids, alkaloids, coumarins, and other metabolites. Therefore, considerable attention has been focused on the use of antioxidants, especially natural antioxidants to inhibit NO production [10,11]. Polygonum multiflorum Thunb, a traditional Chinese herb, has been used in the preparation of herbal medicines in many oriental countries such as China, Japan and Korea for a long time, where dried roots have been well-known as a tonic and an antiaging agent in many remedies in traditional Chinese medicine [12]. Several effective constituents of P. multiflorum Thunb had been reported, including in gallic acid, catechin, stilbene glycoside, anthocyanin and anthraquinone [13]. Recent research indicates that in the ethyl acetate fraction of P. multiflorum Thunb extracts, 2,3,5,4'-tetrahydroxystilbene-2-OBeta- d-Glucoside (THSG), showed strong antioxidant activities [14]. THSG has been reported to reduce peroxidation level of brain in mice with Alzheimer's disease [15] and to down-regulate COX-2 expression and scavenging ROMs resulted in anti-inflammatory effects [16]. However, little information is available about the water extract of P. multiflorum Thunb (PMWE) and its pharmacological activity. Therefore, the aim of present study is to isolate the PMWE and evaluate the antioxidant activity in vitro.

Dried powders of P. multiflorum Thunb (was purchased by the Phytochemistry Laboratory, Department of Pharmacology, Tongji Medical College, Huazhong University of Science and Technology, China) were extracted with 80 ml distilled water at 100°C for 120 min (fexIKA, Germany) and then centrifuged at 25°C, 4500 rpm for 30 min (Allegra X-15R, Beckman Coulter, USA), the supernatant was collected and the residue was extracted twice again. All the supernatants were combined, evaporated at 40°C and freeze-dried. The obtained powders were weighted and stored at-20°C before use [17].

Statistical analysis was performed with one way ANOVA followed by a Tukey's test. The data are presented as the means ± S.E.M.

The effect of PMWE on cell viability in LPSstimulated RAW 264.7 macrophages

Firstly, we evaluated the cell viability of RAW264.7 cells with LPS stimulation and PMWE at different dosages. Figure 1 showed that PMWE has no cytotoxicity for LPS-stimulated RAW264.7 cells at various concentrations (0.1, 0.5 or 1 mg/ ml). 2 mg/ml of PMWE cause the morphological alteration of cells, but the cell number did not decrease. On the other hand, PMWE has cytotoxicity for LPS-stimulated RAW264.7 cells at 5 mg/ml. In the present study, we performed the 0.1-1 mg/ml of PMWE was used in the following experiments. 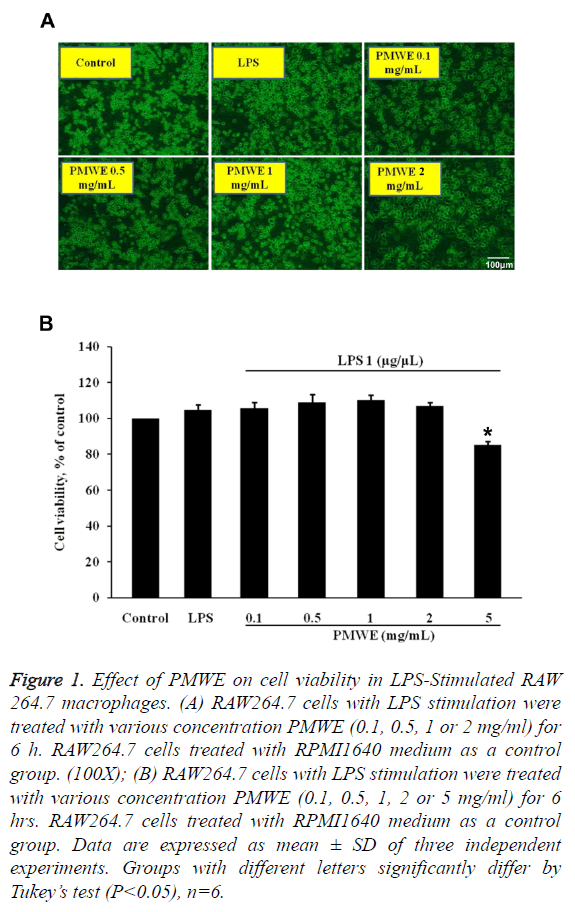 Effects of PMWE on NO production in LPSstimulated RAW 264.7 macrophages

NO is recognized as a mediator and regulator of inflammatory responses. It possesses cytotoxicity properties that are aimed against pathogenic microbes [19]. Pre-treatment with PMWE for 30 min exerted significant repression of LPS-induced NO production in a dose-dependent manner (Figure 2), demonstrating that PMWE significantly suppresses NO production in LPS-stimulated RAW264.7 cells. 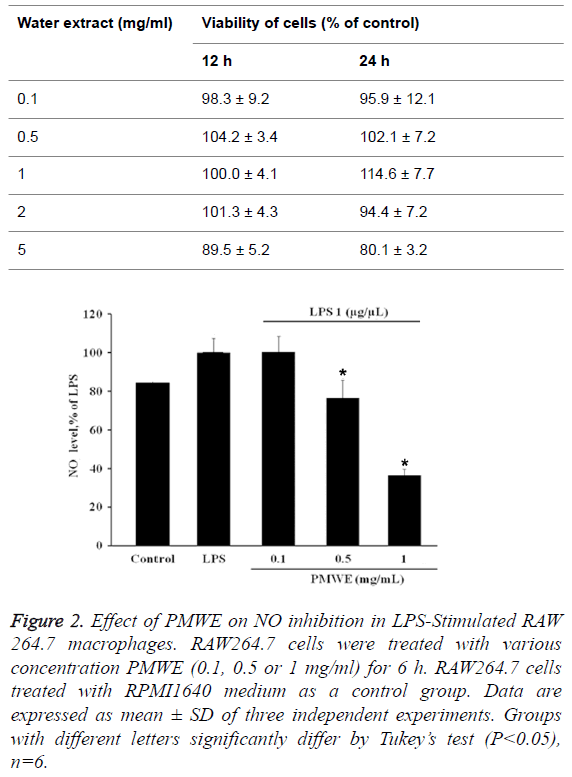 THSG, one of the effective components of P. multiflorum Thunb, has been found to attenuate inflammatory responses [15,16,20]. In the present study, PMWE contains 0.2% of THSG. Therefore, 0.5 and 1 mg/ml of PMWE is equal to 1.5 μm and 3 μm of THSG, respectively. The results have shown that THSG has no cytotoxicity for LPS-stimulated RAW264.7 cells at various concentrations (0.7, 1.5 and 3 μm) (Figures 3A and 3B). In addition, PMWE strongly reduced the NO production in LPS-stimulated RAW 264.7 macrophages compared with THSG (Figure 3C), suggesting that the action of PMWE might be superior to that of THSG as a scavenger of oxidative free radicals. 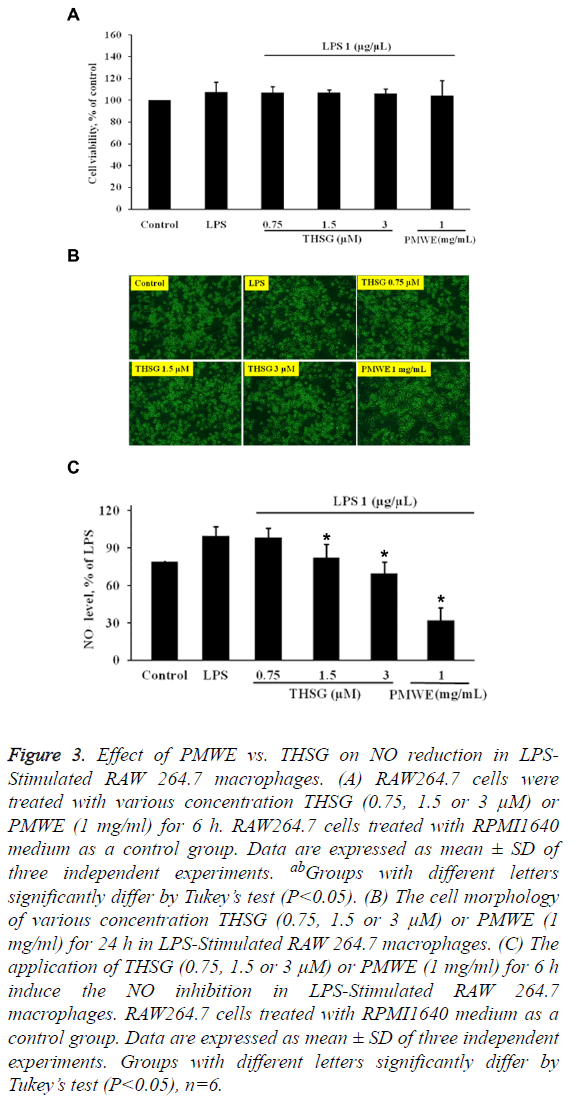 NO is an important molecule for host defense response against various pathogens [21]. It also plays a critical role in the regulation of various pathophysiological processes including neuronal communication, vasodilatation, and neurotoxicity [2,22]. However, overproduction of NO result in tissue damage related with acute and chronic inflammations [11]. Therefore, more attention is now being paid to the development of new drugs as potent inhibitors of NO production to the treatment of chronic inflammatory diseases [23].

Macrophages play important roles in inflammation through the production of several pro-inflammatory molecules, including NO. Production of excessive NO has been associated with a range of inflammatory diseases such as arteriosclerosis, hypertension, ischemic reperfusion and septic shock [11,23]. Several studies have displayed that the plant foods such as fruits, medicinal herbs and vegetables are an excellent source of antioxidant molecules that effectively reduce the inflammatory process by mediating different molecular targets [11,24].

In this study, for the first time, we disclose that the water extracts of P. multiflorum Thunb (PMWE) can suppress NO production in LPS-stimulated RAW 264.7 cells. Meanwhile, PMWE had a strong property to reduce NO production than THSG, which has strong antioxidant activities. We provide evidence to suggest that PMWE might be superior to THSG as a scavenger of oxidative free radicals. Hence, these results suggest that PMWE possesses potential anti-inflammatory activity and holds great promise for the treatment of inflammatory diseases.

This investigation was supported by a grant from Yuan’s General Hospital RG14-012.