Methods: hTERT ASODN-PBCA-NP was prepared using the emulsion polymerization method. The size and morphology were observed by transmission electron microscopy. The drug loading and entrapment efficiency of ASODN in the nanoparticles were measured by UV spectra. The viability of SHG44 glioma cells was detected by MTT assay, cell cycle was determined by flow cytometry. The expression of hTERT mRNA was measured by RT-PCR, telomerase protein expression was measured by immunocytochemical analysis.

Conclusion: PBCA nanoparticles loaded with antisense oligodeoxynucleotide of hTERT can inhibit the expression of hTERT and inhibit the viability of glioma cells.

Glioma is the most common aggressive primary malignant brain tumors. Although significant advances have been made by neurosurgical operative techniques, adjuvant chemotherapy and radiotherapy, the prognosis of glioma remains unfavourable and median survival is within 2 years. The bloodbrain barrier (BBB) consists of endothelial cells which are connected by tight junction, and many enzymes, receptors, transporters and efflux pumps of multidrug resistance pathways. As a result, most chemotherapy agents are unable to reach the glioma in therapeutic concentrations [1]. Nanoparticles made by poly (butyl cyanoacrylate) (PBCA) or poly (lactic-co-glycolicacid) (PLGA) with surface modified by polysorbate 80 enable the transport of chemotherapeutic agents such as doxorubicin across BBB and enter the tumor [2]. After intravenous injection of nanoparticles loading doxorubicin to intracranial glioma bearing rats, the life span of the animals significantly increased. Moreover, these particles considerably reduced the Dox induced cardiotoxicity and testicular toxicity.

It has been found that more than 50% gliomas have increased telomerase activity, and the expression of telomerase is correlated with the grade of malignancy [3]. The level of hTERT mRNA is predictive of glioma patient survival. Antisense oligodeoxynucleotide (ASODN) could inhibit or block the expression of targeting gene, resulting to the loss of activity. It is difficult for ASODN to penetrate biomembrane as a hydrophilic anionic polymer, which can be biodegraded by enzymes in vivo, and its low biostability limited the applications. PBCA nanoparticles are considered to have relatively low toxicity, moreover, it is among the most rapidly biodegrading synthetic polymers [4]. In this study, we prepared hTERT ASDO loaded PBCA nanoparticles (NP) by emulsion polymerization method and evaluated the efficacy to inhibit glioma in vitro.

The PBCA-NP was prepared using the emulsion polymerization method as described previously [5]. Briefly, 0.12 g DEAE-Dextran and 0.18 g Dextran70 were dissolved in 25 ml hydrochloric acid solution, and pH is 2.0. 0.19 ml BCA monomer was slowly dropped into the mixed solution and continued stirring for 6 h, and then filtered by a sintered glass funnel with diameter 0.45 μm. 1 mol/L NaOH was added into such solution until pH reached 7.0 to get PBCA-NP. A certain amount of sense or antisense oligonucleotides was added into the above nanoparticle fluid and continue to stir for 3 h to get SODN-NP/ASODN-NP. hTERT ASODN was designed according to the sequences of hTERT mRNA (AF015950), the sequences were as follows: ASODN1 5’- GCA CGG CTC GGC AGC GGGA-3’; ASODN2 5’- GGAGCG CGC GGC ATC GCGGG-3’; ASODN3 5’-GGT AGA GAC GTG GCT CTGA-3; Sequence of 5’ end FITC labeled antisense oligonucleotides (FASODN) was same as ASODN1; Antisense oligonucleotides sequence (SODN) was designed as control: 5’- CCC GCG ATG CCGCGC GCT CC-3’.

Characterization of NP and SODN-NP/ASODN-N-NP

The NP or SODN-NP/ASODN-N-NP was diluted with distilled water and measured by Laser diffraction particle size analyzer (Mastersizer 3000HS) to assess size and size distribution of nanoparticles. The NP or Dox-NP Suspension was diluted appropriately and dropped on the carbon film coated copper net, stained by 2% phosphate tungsten, dried naturally for 30 min, then observed by Transmission electron microscope (TEM, JEM-100CX, Japan) for its shape and size. The freeze dried SODN-NP/ASODN-N-NP powder which was kept for three months under normal temperature was dissolved by distilled water to detect its stability.

The Drug loading and entrapment efficiency of ODN in the nanoparticles were measured by means of UV spectra at weave length of 260 nm. ODN standard solution was prepared with the concentration gradient of 0.25, 0.5, 0.75, 1.0, 1.25, 2.5, 5.0 and 10 μg/ml. Then 5 ml ODN-PBCA-NP emulsion was centrifuged by speeding cold Freeze (LABCONCO Free Zone 12 L freeze dryer, USA) at 20,000 r/min for 30 min, then the supernatant was taken and the absorbance was measured at the wavelength of 481 nm by UV Spectrophotometry. The drug loading ratio (DL) and encapsulation efficiency (EE) were calculated as follows [6]: DL%=ODNtotal-ODNsupernatant/BCA × 100%; EE=ODNtotal-ODNsupernatant/ODNtotal × 100%.

NP-ODN was suspended in a dialysis system and the released ODN was detected by UV Spectrophotometry.

SHG44 glioma cells were seeded into 96-well culture plates at a density of 5 × 104 cells/well and maintained in 100 μL of DMEM medium supplemented with 10% FBS at 37°C in 5% CO2 for 24 h. After exposure to different NP formulations (ASODN1-3, ASODN1-3-NP, SODN, NP and DMEM) or untreated as control for 24 h at 37, cell viability was evaluated by MTT assay (Yes Service Biotech, Inc.), and the absorbance was read on a micro-plate reader at 540 nm. The survival percentages were calculated as: Survival %=(A540 nm for treated cells/A540 nm for control cells) × 100%. Each assay was conducted in triplicate. Finally, concentration-viability curves were made and IC50 values were calculated.

SHG44 glioma cells were seeded into 6-well culture plates at a density of 1 × 105 cells/well and cultured in DMEM medium supplemented with 10% FBS at 37°C in 5% CO2 for 24 h. The cells were treated with SODN-NP, ASODN or ASODN-NP for 48 h. The cells were collected and washed by PBS, and then cell cycle distribution was analyzed by flow cytometry.

SHG44 cells were treated by different NP. The cells were fixed by 3% paraformaldehyde for 30 min and washed by PBS twice. The telomerase protein was detected by EnVision Kit (DAKO) according to the manufacturer’s instructions.

Data analysis was performed by using SPSS 12.0 software. The results were expressed as means ± standard error (SE). ANOVA was used for the comparison among the groups. Statistical significance was set at P<0.05.

Characterization of NP and SODN-NP/ASODN-N-NP

The nanoparticles were discrete and uniform spheres with average diameter of 120 nm (Figure 1A). Its size distribution was narrow. Its drug loading and entrapment efficiency for ASODN was 71.17% and 95.20%, respectively, and its Zeta potential was +41.3 mV. 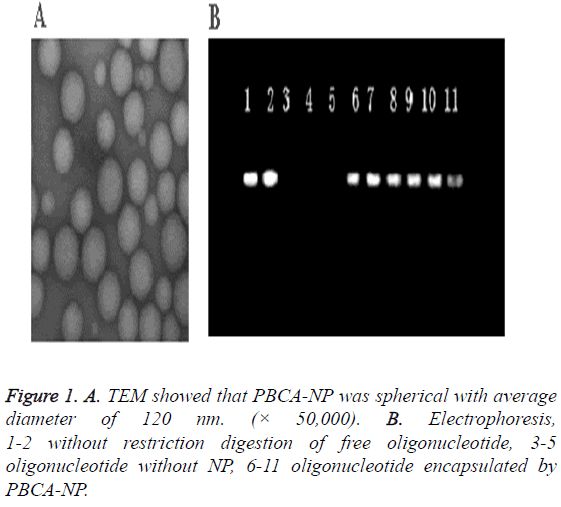 Figure 1: A. TEM showed that PBCA-NP was spherical with average diameter of 120 nm. (× 50,000). B. Electrophoresis, 1-2 without restriction digestion of free oligonucleotide, 3-5 oligonucleotide without NP, 6-11 oligonucleotide encapsulated by PBCA-NP.

Cumulative release of ASODN from ASODN-NP was analyzed by drawing release curve. As shown in Figure 2, ASODN release increased with the increase of the time. Furthermore, the freeze dried SODN-NP/ASODN-NP powder were kept for three months under normal temperature and then dissolved in distilled water. The drug loading ratio (DL) and encapsulation efficiency (EE) were calculated, and they showed no significant difference compared to those of freshly prepared SODN-NP/ASODN-NP, indicating the stability of ASODN-NP. 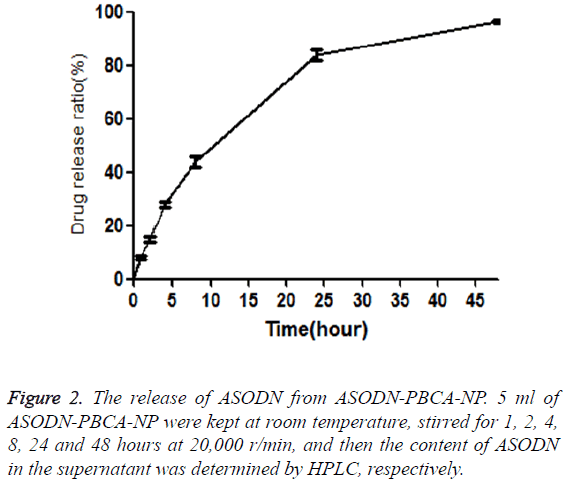 Figure 2: The release of ASODN from ASODN-PBCA-NP. 5 ml of ASODN-PBCA-NP were kept at room temperature, stirred for 1, 2, 4, 8, 24 and 48 hours at 20,000 r/min, and then the content of ASODN in the supernatant was determined by HPLC, respectively.

Table 1: Flow cytometry analysis of cell cycle in each group.

Telomerase is a reverse transcriptase enzyme which maintains telomeres by adding telomeric TTAGGG repeats to the ends of chromosomes [7]. High expression of telomerase is believed to be an essential step during malignant tumor progression [8,9]. Furthermore, high telomerase activity is usually associated with high tumor aggressiveness. It has been found that more than 50% gliomas have high telomerase activity, and the level of hTERT mRNA was predictive of glioma patient survival. Antisense treatment induced a decrease in hTERT mRNA expression, telomerase activity, cell viability, and an increase in apoptosis [10]. However, antisense oligonucleotide is difficult to penetrate cell membranes and blood-brain barrier, and prone to be degraded by endonuclease in the blood or CSF, which limits the use of antisense oligonucleotides in the clinic.

In this study, ASODN encapsulated in PBCA-NP was protected from the degradation by the nuclease. Maksimenko et al. reported that antisense oligonucleotides against EWSFli- 1 oncogene inhibited the growth of EWS-Fli-1 dependent Ewing’s tumor grafted to nude mice with high specificity after being encapsulated by nanocapsules or nanospheres [11]. The main advantages of using nanoparticles for brain drug targeting include their ability to deliver drugs to the brain without changing their original characteristics, decrease drug escape in the brain and reduce peripheral toxicity. It was found that oligonucleotides encapsulated into polyisohexylcyanoacrylate nanoparticles are protected from nuclease attack and increase cellular uptake of oligonucleotides by an endocytic/phagocytic pathway [12].

In this study, after being encapsulated into nanoparticles, the stability of ASODN increased significantly, which was confirmed by the electrophoretic mobility shift assay. After SHG44 glioma cells were treated with ASODN-NP, we found reduced hTERT mRNA and reduced telomerase protein expression levels, reduced cell viability, increased percentages of cells at G0/G1 and G2/M phases and decreased percentages of cells at S phase compared to control groups.

In conclusion, nanoparticles obtained by emulsion polymerization method are steady with high drug loading and entrapment efficiency of oligodeoxynucletide. Polybutylcyanoacrylate nanoparticles loaded with antisense oligodeoxynucleotide of hTERT can enter into glioma cells, block the expression of hTERT, and inhibit cell viability. Thus they are promising agent for the treatment of glioma.