Cardiovascular complications of diabetes are a leading cause of morbidity and mortality. Vascular endothelial dysfunction (VED) is strongly implicated in the pathogenesis of diabetic vascular complications. Impaired endothelial cell (EC) production of nitric oxide (NO) is a main characteristic of VED. In ECs, NO is produced by endothelial nitric oxide synthase enzyme (eNOS), by utilizing Larginine. Arginase in ECs also uses L-arginine as a substrate to produce urea and ornithine. Recently arginase upregulation has been shown to play a role in vascular dysfunction in diabetes by limiting Larginine bioavailability to eNOS and thus limiting NO production. We performed analysis of arginase activity in type 2 diabetic patients. Arginase activity was elevated in type 2 diabetic patients as compared to age-matched healthy volunteers. Levels of arginase activity have positive correlation with HbA1c levels in diabetic patients (R2=0.8 Pearson r=0.87). Cell studies also agreed with these findings, as high glucose (25 mmol/L, 72 h) treatment to ECs resulted in a 66% increase in arginase activity. This increase in arginase activity was concomitant with a 27% drop in NO produced by EC. Inhibition of arginase by ABH (100 umol/L) restored NO level to normal. Collectively, our results indicate that diabetic state causes an elevation of arginase activity which can limit EC production of NO and thus impairs vasorelaxation. Arginase can be regarded as a novel marker for the vascular complications of diabetes. Drugs targeting arginase or its signaling pathway may show benefits in delaying or preventing these vascular complications of the disease.

Type 2 diabetes mellitus is a major global health problem. Estimates of the International Diabetes Federation predicts that more than 600 million people will have diabetes mellitus worldwide by 2040 [1]. Vascular endothelial dysfunction (VED) is strongly implicated in the pathogenesis of diabetic vascular complications, which are a major cause of morbidity and mortality in these patients [2]. Impaired endothelial cell production of the vasodilator and anti-inflammatory molecule nitric oxide (NO) and/or decreased NO bioavailability is the main characteristic of endothelial dysfunction [3]. In endothelial cells, NO is produced by endothelial nitric oxide synthase enzyme (eNOS), which utilizes L-arginine and produces L-citrulline as a by-product [4]. Arginase, a critical enzyme in the urea cycle, competes directly with eNOS for their common substrate L-arginine to produce urea and L-ornithine. Upregulation of arginase has been implicated in vascular endothelial dysfunction through limiting the availability of L-arginine to the eNOS pathway and converting it to the arginase pathway. These events result in a decreased NO production and increased superoxide generation due to eNOS uncoupling [5]. Several vascular diseases, such as atherosclerosis, pulmonary hypertension, coronary heart disease, erectile dysfunction, hypertension and aging-associated endothelial dysfunction have been linked to this mechanism [6]. In addition, cell culture, animal, and clinical studies have shown the involvement of arginase in diabetes associated vascular dysfunction [7].

Acute L-arginine supplementation has been reported to prevent or reverse endothelial dysfunction and restore endothelial vasodilation in diabetes and various cardiovascular disease states, thus implicating an important role in the arginine metabolic pathways in vascular function in diabetes. However, no benefit or worsening of adverse outcomes was reported with chronic L-arginine supplementation [8]. Studies to identify markers for type 2 diabetes mellitus and its associated cardiovascular complications are essential to help control the disease and prevent the onset and progression of possibly fatal complications at an early stage. Inflammatory markers as C-reactive protein (CRP), IL-6 and fibrinogen have shown association with increased cardiovascular risk in diabetes [9]. In this study we determined arginase activity levels in type 2 diabetic patients. We hypothesize that arginase could be a novel biomarker for the development and progression of diabetic complications.

Patient selection and testing: Our study is a prospective study that included 62 type 2 diabetic patients attending the endocrine clinic at Jordan University Hospital (JUH). Patients, 45-65 year-age, with type 2 diabetes and who are on oral hypoglycemic drugs were selected. Patients signed a consent form to participate in the study that was approved by the JUH ethics committee. Procedures were followed in accordance with the Helsinki Declaration of 1975. Patients taking insulin were excluded from the study. Patients were interviewed for a full medical history and a list of concomitant medications. Blood samples (3-5 mL) in ethylenediaminetetraacetic acid (EDTA) tubes were collected and kept at -4°C and processed in the same day.

Seventy age-matched healthy volunteers were enrolled in this study. Full medical and medication history was taken. A blood sample (3-5 mL) was obtained from volunteers in an EDTA tube and kept at -4°C and processed in the same day.

Cooled blood samples were centrifuged at 3000 x g for 10 minutes. Plasma was immediately collected in Eppendorf tubes and stored at -80°C.

In all cell experiments, bovine aortic endothelial cells (BAECs) were utilized. Proliferating BAECs were purchased from Cell Applications (San Diego, CA). Cells were cultured in Endothelial Growth Medium (Cell Applications, San Diego, CA) and maintained in a humidified atmosphere at 37°C and 5% CO2. Before starting experiments, cells were adapted to grow in low glucose Dulbecco's Modified Eagle Medium (DMEM) (Gibco Fisher Scientific, Waltham, MA). In addition, the medium was also supplemented with 10% FBS, 1% penicillin/streptomycin, and 1% L-glutamine. When cells reached 80% confluency, they were serum- starved overnight in 0.2% FBS. In hyperglycemia conditions D-glucose (Sigma, St. Louis, MO) was added to the cell medium at a concentration of 25 mmol/L .Cells were treated with an arginase inhibitor, Amino-2-Borono-6-Hexanoic acid (ABH, 100 μmol/L) ( Santa Cruz Biotechnology, Dallas, TX) . All experiments were performed with cells from passage 3-9.

Arginase activity was measured using a colorimetric determination of urea production from L-arginine as described previously [10]. In brief, 25 μl of supernatant was heated with MnCl2 (10 mmol/L) for 10 min at 56°C to activate arginase. The mixture was then incubated with 50 μl L-arginine (0.5 M, pH 9.7) for 1 h at 37°C to hydrolyze the L-arginine. The hydrolysis reaction was stopped with acid, and the mixture was then heated at 100°C with 25 μl α-isonitrosopropiophenone (9% α-ISPF in ethanol) for 45 min. The samples were kept in the dark at room temperature for 10 min, and absorbance was then measured at 540 nm.

To measure NO, nitrite (NO2) the stable breakdown product of NO in the cell conditioned medium was analyzed using NOspecific chemiluminescence [11]. After cells were treated, medium was replaced with fresh DMEM for 30 minutes, and medium aliquots were then collected for basal reading. Cells were then exposed to the calcium ionophore ionomycin (Sigma Aldrich, St. Louis, MO) (1 μmol/L) for 30 minutes and medium samples were collected. In brief, samples containing NO2 were injected in glacial acetic acid containing sodium iodide. NO2 is quantitatively reduced to NO under these conditions, which can be quantified by a chemiluminescence detector after reaction with ozone in a NO analyzer (Sievers, Boulder, CO). The amount of NO generated is calculated as the difference in basal and ionomycin-stimulated NO levels.

Table 1 summarizes study participants’ demographic data. There was an equal distribution between males and females among our two groups of control non diabetic individuals and diabetic patients. Data also show glycated haemoglobin (HbA1c) and fasting blood glucose (FBS) in both groups. In addition, health problems related to the cardiovascular system are reported. Data shows that the majority of diabetic patients complain also from hypertension (72.5%) and almost 37% have dyslipidemia, both conditions can exaggerate vascular dysfunction in diabetes. 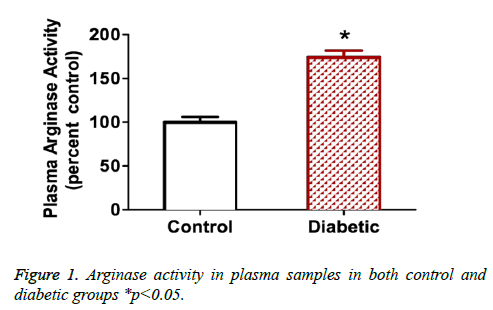 Figure 1: Arginase activity in plasma samples in both control and diabetic groups *p<0.05. 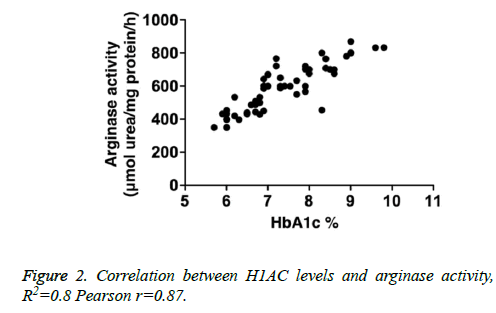 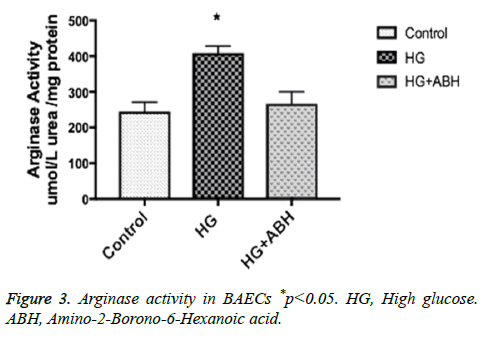 BAECs were incubated in conditions of high glucose (25 mmol/L) for three days with changing the medium every day. These cells were compared to cells grown in normal glucose concentration (5 mmol/L). Ionomycin stimulated NO production was calculated in reference to basal reading in high glucose vs. control (normal glucose) treated cells. NO production decreased by 27%, p<0.05. Pretreating endothelial cells with an arginase inhibitor (ABH, 100 umol/L), restored NO production to normal levels (Figure 4). 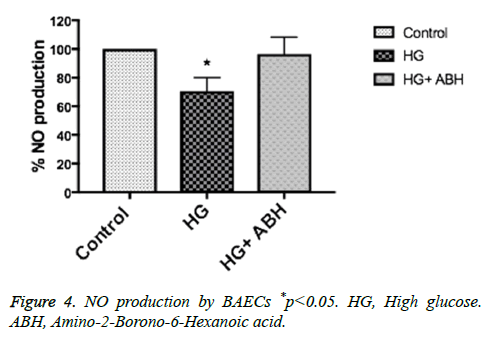 In the last decade, an emerging role for elevated arginase activity and/or expression in vascular endothelial dysfunction has drawn much attention in a number of disease states. These include hypertension, diabetes, atherosclerosis, ischemia/ reperfusion (I/R) injury and inflammation [12]. In conditions where arginase activity is elevated, arginase can compete with nitric oxide synthase (NOS) for their common substrate, L-arginine. Reduction in L-arginine availability to NOS can lead to decreased production of NO, and possible NOS uncoupling and increased superoxide formation. The competition between arginase and NOS has been reported to be involved in disease states such as hypertension and vascular complications of diabetes [13]. Arginase has been shown to be elevated in a model of streptozotocin-induced diabetic mice associated with vascular endothelial dysfunction (VED) [14].

It is well established now that increases in arginase activity can lead to development of vascular dysfunction by limiting L-arginine availability [16]. We suggest that arginase levels could be a marker of early development of vascular dysfunction of diabetes. Interestingly 72% of diabetic patients enrolled in our study had hypertension, and these patients were mostly the patients with higher levels of arginase activity which represents a significant association, although no significant correlation was established.

Arginase in vascular disease is not only to be considered a marker of the development of the condition, but also a therapeutic target. Recently, it was shown that inhibiting arginase by infusing Nω-hydroxy-nor-L-arginine, improves microvascular endothelial function in patients with type 2 diabetes with microvascular dysfunction [17].

Our clinical data is supported by cell culture experiments of diabetic conditions. Our results showed that incubating BAECs under high glucose (25 mmol/L) for three days, resulted in a significant increase in arginase activity. BAECs, under the same treatment conditions of high glucose, caused a 27% decrease in nitric oxide (NO) production. The decrease in NO production was restored upon pretreating cells with the novel arginase inhibitor ABH. These data support our conclusions of the role of arginase in limiting NO production, and thus developing vascular endothelial dysfunction [18].

Collectively our results indicate that arginase can be a novel biomarker for the development and progression of diabetic complications. Arginase inhibitors may have therapeutic benefits in diabetic patients by preventing vascular dysfunction and maintaining NO levels.

This work was supported by the 2014 UNESCO-L’Oreal For Women in Science International Fellowship (To Shatanawi A) and The University of Jordan Research Deanship grant (to Shatanawi A. and Momani M.). The authors would like to thank Prof. R. W. Caldwell at the Medical College of Georgia for kindly providing access to use NO analyzer to perform nitric oxide production experiments.