Objective: To evaluate serum levels of biomarkers as early indicators of onset of preeclampsia during pregnancy. Method: A nested case-control study was conducted among the pregnant women who visited for antenatal check-up at R.L. Jalappa Research Center, Kolar between August 2017 and May 2018. Serum levels of placental protein 13 (PP13), asymmetric dimethylarginine (ADMA), nitric oxide and caspase-3 which represents placentation and endothelial function were measured and compared between trimesters. Results and Discussion: There were 86 pregnant women enrolled at first trimester, the baseline values of women who developed preeclampsia were PP13 (477.54 ± 62.72 pg/ml), ADMA (21.06 ± 19.42 ng/ml), nitric oxide (3.71 ± 2.76 nmol/μL) and caspase-3 (6.15 ± 0.55 ng/ml). In the second trimester on follow up, the mean serum concentration of PP13 was 530.64 ± 69.10 pg/ml in preeclampsia versus 518.26 ± 49.33 pg/ml in normal pregnancy. The mean serum concentration of ADMA was 73.43 ± 30.95 ng/ml and nitric oxide 4.10 ± 2.70 nmol/μL in preeclampsia versus 21.06 ± 19.42 ng/ml and 4.85 ± 2.19 nmol/μL in normal pregnancy. The mean serum concentration of caspase-3 in preeclampsia was 22.65 ± 0.91 ng/ml versus normal pregnancy 18.45 ± 2.62 ng/ml were recorded. In preeclampsia, PP13 was positively correlated with nitric oxide and negatively correlated with ADMA. Conclusion: Decreased PP13, nitric oxide and elevated ADMA in first trimester and increased PP13, ADMA and decreased nitric oxide at second trimester reflects altered placentation and endothelial function.

Preeclampsia contributes to the global incidence of 2-8% of pregnancies with maternal/neonatal morbidity and mortality in developing countries with poor antenatal care. The criteria for diagnosis of preeclampsia are blood pressure ≥ 140/90 mmHg with renal insufficiency, impaired liver function, haematological and neurological complications [1]. The adverse outcomes of preeclampsia are fetal growth restriction with oligohydramnios, preterm birth, low birth weight, severe birth asphyxia, still birth or intrapartum death. Many etiologies linked to this syndrome, viz. insufficient trophoblast invasion, uteroplacentalischemia, vascular disorders of the placenta, insulin resistance, systemic maternal inflammation, endothelial dysfunction and antiangiogenic state [2]. Even though, the exact reason for this pregnancy disorder is not known, preeclampsia research is striving to address this issues related to early diagnosis, underlying mechanism and management of the disorder. Therefore, the early assessment of preeclampsia by using biomarkers is effective and has drawn much attention. Human placental protein 13 (PP13) is 32 kDa β-galactoside binding soluble-type galectin synthesized in the syncytiotrophoblast. The presence of carbohydrate recognition domain (CRD) in its structure enables binding to the glycans of endometrial membrane and annexin II of the extracellular matrix during implantation and embryogenesis. PP13 binds to β and γ actin proteins of cytoskeleton in the syncytiotrophoblast and facilitates its migration by increasing prostaglandin release, which is important for vascular remodelling during placental development. Besides, it is also known to provide immune tolerance at the maternal-fetal interface [3]. Nevertheless, theexact aetiology of preeclampsia is unclear, abnormal remodelling of uterine blood vessels and immunological tolerance between fetal and maternal tissues play possible role in the pathogenesis of this disorder [4]. Therefore, early assessment of PP13 concentrations seems advantageous.

Asymmetric dimethylarginine (ADMA), a methylated compound generated by post translational modification of proteins, that prevents nitric oxide production by competing with L-arginine and inhibits nitric oxide synthase activity. It is associated with endothelial dysfunction in the placenta reducing placental perfusion as seen in preeclampsia. There are reports presenting increased ADMA concentration in first trimester that could predict preeclampsia [5].

Caspases or cysteine aspartic proteases also known as cathepsins are predominantly intracellular enzymes involved in the process of apoptosis. Cellular stress such as hypoxia/ oxidative stress is known to trigger the intrinsic pathway and extrinsic pathway is brought about by the binding of first apoptotic signal-associated death domain (FADD) to its death receptors (Tumor necrosis factor death receptor family) expressed by the trophoblasts. Collectively, both the pathways lead to activation of executioner or effector caspase-3 to initiate apoptosis [6]. Small number of studies has reported the association of serum caspase-3 levels with other diseases like severe traumatic brain injury, intracerebral haemorrhage and endometriosis severity [7-9]. Also a report available on increased expression of caspase-3 in placental bed biopsies have shown to be associated with preeclampsia [10]. The information on serum caspase-3 in pregnancies with or without complications is scarce. Thereby, current study is attempting to evaluate serum caspase-3 in pregnancy.

The objective of the study is to screen pregnant women with serum biochemical indicators for understanding the process of placentation and placental vascular endothelial function and also to identify women who possibly develop preeclampsia during their pregnancy.

A nested case-control study has enrolment of eighty-six women at 11-24 weeks of pregnancy visited R. L. Jalappa Hospital and Research Centre for antenatal check-up between August 2017 and May 2018. Department of Obstetrics and Gynaecology and Department of Biochemistry participated in the study and the study design was approved by Central ethics Committee of Sri Devaraj Urs Academy of Higher Education and Research, India. Informed consent for participation in the study and blood sampling was obtained from all the participants of the study group. During the study period, subjects were screened for the biochemical parameters in first and second trimesters of pregnancy. Four millilitres of blood was collected from pregnant women by venipuncture under aseptic conditions in first and second trimesters during their regular antenatal check-up. Blood samples were allowed for retraction at room temperature, and centrifuged at 3000 rpm for 20 minutes for separation of clear sera which were stored at -20°C until ELISA was performed. Primigravida aged 20-35 years with singleton pregnancy were included in the study and exclusion criteria was women with history of liver disease, renal failure, hypertension, or with any vascular diseases.

The obtained data was statistically analysed using licensed version of SPSS 20.0. Mean ± SD was calculated for all the variables. Since the data was not normally distributed, nonparametric Wilcoxon rank sum test was used to find significance between the study parameters in first and second trimesters of pregnancy and cases that developed preeclampsia. Pearson's correlation was used to assess the correlation between PP13, ADMA and Nitric oxide in preeclampsia in both the trimesters. Statistical significance was defined as p<0.05.

Table 1. Comparison of outcome of parameters between first and second trimester of pregnancy.

Table 2. Comparison of outcome of parameters between baseline values of first and cases developed preeclampsia after second trimester of pregnancy. 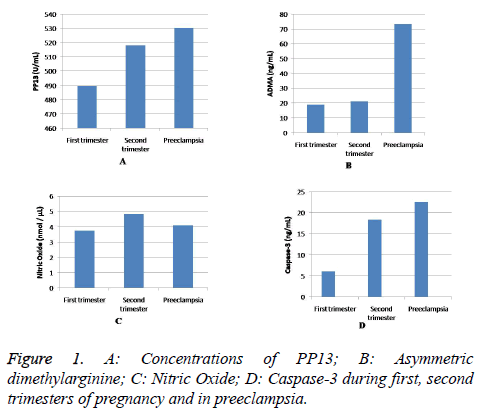 Figure 1: A: Concentrations of PP13; B: Asymmetric dimethylarginine; C: Nitric Oxide; D: Caspase-3 during first, second trimesters of pregnancy and in preeclampsia.

Table 3. Comparison of correlation of outcome parameters between first and second trimesters of pregnancy.

The findings of the present study revealed that emergence of seven preeclampsia cases from the pregnancy group, which amounts to 8.1% in the study population (n=86) which is in line with the data of the National Health Portal of India that reported the incidence of preeclampsia in India is about 8-10% in pregnant women [14].

Preeclampsia is generally characterized by elevation in blood pressure and Proteinuria. In the absence of proteinuria, diagnosis can also be made based on different sign and symptoms. Hence, screening pregnant women at early stage for a diagnosis of onset of preeclampsia is crucial using single or in combination of new biomarkers.

One such biomarker is PP13 that secretes into maternal circulation before6th week of gestation from exosomes or microvesicles and remains even after 2-5 weeks of delivery in maternal circulation. The functional role of PP13 is embryo implantation, provides immune tolerance and increases prostaglandins release which might facilitate in sufficient trophoblast invasion for proper placental development [15]. So the reduced levels of PP13 may probably impair normal placental development. Our previous study findings showed that women with low PP13 levels (477.54 pg/ml) in first trimester of pregnancy developed preeclampsia on follow-up. This data specified that low PP13 levels in first trimester could serve as a marker to identify women with preeclampsia risk. A retrospective study by Romero et al. also gave an idea that low PP13 concentrations in 5-6 weeks of pregnancy were related with the occurrence of preeclampsia [16]. Even though, knowing the possible reason for low concentrations of PP13 in first trimester is challenging, however it can be hypothesized that increased oxidants might influence the expression and secretion of the protein may linked genetically with decreased LGALS13 gene expression.

During follow up in second trimester, elevated levels of PP13 concentration (530.64 ± 69.10 pg/ml) was noticed in preeclampsia compared to normotensive group (518.26 ± 49.33 pg/ml). This steep rise in serum PP13 levels is indicative of increased turnover of the oxidatively stressed syncytiotrophoblast into the maternal circulation. An in vitro experiment by Balogh et al. demonstrated that BeWo cells when exposed to ischemic stress conditions resulted in increased release of PP13 into the culture [17]. Placental hypoxic-ischemia may be a major cause for enhanced trophoblast apoptosis and thus PP13 level increase in maternal circulation in preeclampsia.

Limited data is available with respect to serum PP13 and its correlation with nitric oxide in humans. Even though, few animal studies have demonstrated infusion of recombinant PP13 to pregnant rats, reduces blood pressure and expands uteroplacental vasculature. However these studies failed to trace the functional role of PP13 with respect to regulation of blood pressure and the pathway responsible for it [20]. Based on this research gap, our current study attempted to evaluate serum PP13 level in humans and extrapolate its possible association with nitric oxide production. Accordingly, the present study results showed positive correlation between PP13 with nitric oxide in both trimesters of pregnancy.

Elevated ADMA level in second trimester and in preeclampsia cases suggesting that fetus can also contribute to ADMA concentration. Thereby, we observed a highly significant increase in the serum concentrations of ADMA levels in second trimester (73.43 ± 30.95 ng/ml) compared to the baseline value in the first trimester (21.06 ± 19.42 ng/ml) in first trimester. The three-fold increase could be chronic placental ischemia in preeclampsia leads to oxidative stress which diminishes the activity of the enzyme dimethylarginine dimethylaminohydrolase-2 (DDAH-2) in the placenta signifying the failure of the placenta to degrade ADMA produced by the fetus [21].

To support the above observations, a negative correlation was also observed between nitric oxide and ADMA in preeclampsia but was not found statistically significant; however Mao et al. reported contradictory findings [22].

The nested case-control study conducted revealed measurement of panel of non-enzymatic parameters like PP13, nitric oxide and ADMA, and enzyme caspase-3 assists as good indicators to identify the risk of preeclampsia. Probably PP13 measured in the Indian population is scarce. Fewer studies have performed to study the involvement of biomarkers in placentation and endothelial dysfunction in preeclampsia. Besides, the study also demonstrates a relationship between PP13, ADMA, nitric oxide and caspase-3 which may form the basis of diagnosis of preeclampsia. First and second trimester screening are useful to know the early onset of the disorder associated with the underlying placentation process. Besides PP13, ratio of nitric oxide: ADMA measured during pregnancy is also informative for understanding endothelial function during early pregnancy. Hence, combination of these markers that reflect placentation and endothelial function project their precise screening effectiveness in diagnosing preeclampsia before the onset of symptoms.

We thank the authorities of Sri Devaraj Urs Academy of Higher Education and Research for supporting this research study.