To investigate the effect of Pioglitazone (Pio) on the rejection reactions that occurs in heart transplantation. A total of 96 rats with heart transplantation were treated with cyclosporin A (CsA) alone, Pio alone, or the combination of both. The percentages of CD25+ and CD28+ T cell in the spleen of rats were measured using flow cytometry. Combined use of Pio and CsA prolonged the survival of transplanted hearts. In addition, pathologic lesions were relieved. Meanwhile, the contents of interleukin-2 in serum and the percentages of CD25+ and CD28+ lymphocytes in the receptor’s spleens were significantly reduced by the combination of Pio and CsA. Of note, the effect of combined use of Pio and CsA was better than that of single use. The present study demonstrates that combined use of Pio and CsA reduces the dose of CsA, ameliorates rejection reactions, and improves the life quality of recipients with heart transplantation.

Peroxisome Proliferator-Activated Receptor (PPAR) is expressed in macrophages, T cells, vascular smooth muscle cells and cardiomyocytes, participating in the regulation of various inflammatory responses [7,8], and the expression of tumor necrosis factor-α and inducible nitric oxide synthase [9]. The agonist of PPAR can improve heart function by inhibiting myocardial hypertrophy and fibrosis via lowering the activity of nuclear factor-kappa B [10]. Pioglitazone (Pio) is a highly selective agonist of PPAR that participates in immune regulation by inhibiting the proliferation of T cells in vitro [11]. Pio also plays important roles in inflammation, arteriosclerosis, and reperfusion injury [12], and promotes inflammatory cell apoptosis [13]. As an outstanding immunosuppressant, cyclosporin A (CsA) enhances the recent survival rate of solid organ transplantats, and becomes the first choice for immunosuppression and anti-rejection after organ transplantation [14-16]. In this study, we investigate the effect of Pio on the symptoms occurring in rat heart transplantation, the survival time of transplanted heart, and immunologic activities.

On d 3, 7, 14 and 18, four rats in each group were sacrificed for laparotomy. Blood (2 ml) was collected from the inferior vena cava and centrifuged at 1500 rpm for 5 min. The separated serum was mixed with phenylmethanesulfonyl fluoride to prevent degradation, and frozen at -80°C for future ELISA. The excised heart tissues were fixed with 4% paraformaldehyde for pathological examinations. The spleen was made into cell suspension for flow cytometry.

After dewaxing by xylene, the sections were treated with high to low concentrations of ethanol, before rinsing with water, acid and ammonia. After washing with flowing water for 1 h, the sections were dehydrated using 70% and 90% ethanol for 10 min each. Then, the sections were stained with eosin for 3 min, before dehydration by pure ethanol and transparency by xylene. Stained slides were cover-slipped with Permount. Finally, the entire HE stained cells were examined under a bright light microscope using 100-400X magnification. The pathological examinations were performed according to the standard by International Society of Heart and Lung Transplantation (ISHLT).

The level of interleukin (IL)-2 was measured using the ELISA kit (BD Biosciences, USA). The procedure was carried out according to the manufacturer’s manual. Absorbance at 450 nm was measured using a microplate reader (DJ3022, Potenov Technology Co., Ltd., Beijing, China) within 15 min after stopping the reactions. The concentrations of IL-2 were calculated by plotting standard curves.

The spleen was collected from rats after transplantation for the examination of T-lymphocyte subsets. Single-cell suspensions (1 × 106 cells/ml) were stained in cell staining buffer at saturating concentrations according to standard procedures. Cells were stained for CD25+ and CD28+ monoclonal antibodies conjugated to Fluorescein Isothiocyanate (FITC) and Foxp3 monoclonal antibodies conjugated to Phycoerythrin (PE).

All statistical analyses were performed with SPSS 18.0 for Windows. Results were expressed as means ± standard deviation for test of normality. If the data conform to normal distribution and the variance is homogeneous, multigroup measurement data were analysed by ANOVA and Dunnett multiple comparison tests and two groups of data were compared by Student’s t-test. If the data does not conform to normal distribution or variance is not uniform, multigroup data were checked by Kruskal-Wallis test and Tamhane's T2 or Dunnett's T3 methods, while two groups of data were examined by Mann-Whitney method. P<0.05 indicated statistically significant differences, while P<0.01 indicated differences that were even more significant. 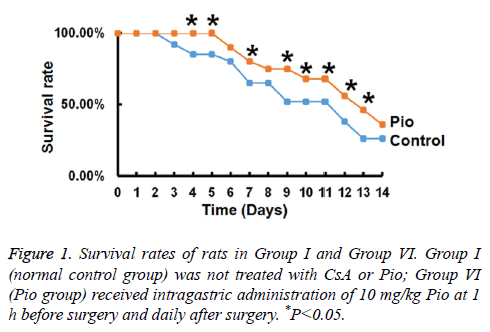 Figure 1: Survival rates of rats in Group I and Group VI. Group I (normal control group) was not treated with CsA or Pio; Group VI (Pio group) received intragastric administration of 10 mg/kg Pio at 1 h before surgery and daily after surgery. *P<0.05.

Pio reduces the severity of rejection reactions of transplanted heart, having synergistic effects with CsA 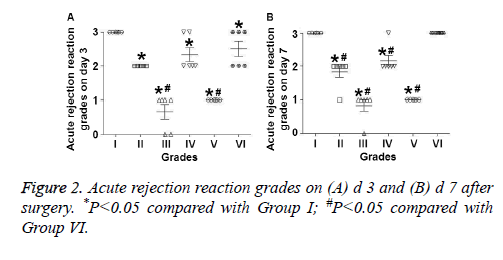 Pio alone, or its combination with CsA, delays the appearance of CD25+ and CD28+ T cells in spleen

Table 2: The percentage of CD25+ cells in T lymphocytes in spleen cell suspension on d’s 3, 7 and 14 after surgery (%, means ± standard deviation).

Table 3: The percentage of CD28+ cells in T lymphocytes in spleen cell suspension on d’s 3, 7 and 14 after surgery (%, means ± standard deviation).

The present study showed that rats treated with Pio had better recovery after surgery, longer survival time, and extenuated rejection reactions. In addition, combined use of Pio and CsA showed longer survival time and milder rejection reactions compared with single use of CsA or Pio, demonstrating synergistic effects. IL-2 is a kind of cell factor with extensive biological activities. It enhances non-specific immune response and antigen-specific adaptive immune response by activating cytotoxic T cells and natural killer cells. After heart transplantation, serum levels of IL-2 are gradually elevated as the aggravation of rejection. After the peak time of rejection reactions, serum levels of IL-2 begin to reduce. In the present study, Pio delays the peak time of IL-2, and reduces the concentration of IL-2. Of note, combined use of Pio and CsA has better effect in lowering IL-2 levels compared with using CsA alone.

CD28 molecules can be expressed in all CD4+ T cells or 50% CD8+ T cells. In rejection reactions induced by organ transplantation, the activation of T cells must be triggered by the dual signals presented by antigen-presenting cells. CD28, as a receptor of B7, is mainly expressed on the surface of activated T lymphocytes. The binding of B7 with CD28 transfers activation signals, while the binding of B7 with CTLA4 (CD152) transfers inhibition signals [17]. The binding of B7 and CD28 increases the transcription of interleukin mRNA, enhancing the secretin of IL-2 and the proliferation and differentiation of T cells. In the deficiency of CD28, 90% of IL-2 mRNA can be degraded in 90 minutes, probably because the binding between B7 and CD28 enhances IL-2 gene transcription and stabilizes IL-2 mRNA signals [18]. Rejection reactions in heart transplantation are caused by the direct killing effect by activated CD8+ cytotoxic immune cells. Russell et al. reported that the survival rate of F344 rats with transplanted hearts in CTLA4-LgG treatment group was 64% on d 70, while that in CsA treatment group was 26% [19]. The frequency and severity of arteriosclerosis in CTLA4-LgG treatment group were significantly lower than those in CsA treatment group [19]. Dengler demonstrated that rats treated with CD28 monoclonal antibody had prolonged survival time after heart transplantation [20]. These reports show that CD28 is closely related to rejection reactions after heart transplantation. In the present study, the percentage of spleen CD28+ cells in rats untreated with any drug was significantly increased on d 3 after surgery, and reached peak on d 7. After the acute phase of rejection, the percentage of CD28+ T cells was quickly reduced. Pio delays the appearance of CD28+ T cells in the spleen, while CsA alone or the combination of CsA and Pio significantly inhibited the appearance of CD28+ T cells in the spleen.

Immune deviation is demonstrated to be beneficial for the induction and formation of immunologic tolerance. High expression of IL-2, IL-2R and interferon-γ is detected in rejected organs. This phenomenon can be explained by the karyotype differentiation from Th1 to Th2 [24]. However, some other report argue that Th2 immune deviation promotes the occurrence of chronic rejection reactions in transplanted organs with relatively long survival time [25]. Therefore, the long survival of transplanted organs needs the absence of expression of Th1 and Th2 type cytokines. In the present study, higher levels of spleen CD25+ correspond to more severe early rejection rejections. Pio alone, CsA alone or the combination of the two inhibits the early expression of CD25+ in spleen. In conclusion, Pio ameliorates inflammatory responses after heart transplantation in rats, prolongs the survival time of transplanted hearts when used in combination with low dose of CsA, and exerts synergistic effects with CsA in inhibiting rejection reactions.

This work was supported by the Provincial Nature Science Foundation of Shandong Province of China (No. Y2007C048).