The Pim-1 gene was originally identified in Murine Leukemia Virus (MuLV) induced T-cell lymphoma. The human Pim-1 gene is localized at 6P21.1-p21.31, consisted of 6 exons and 5 introns. The Pim-1 gene encodes a serine/threonine kinase, which belongs to calcium/calmodulin regulatory kinase (CAMP) [1]. Pim-1 is mainly expressed in the thymus, spleen, bone marrow and fetal liver and other hematopoietic organs, while its expression is absent in adult tissues. Recent studies have shown that Pim-1 kinase can phosphorylate a variety of protein substrates, and it is a downstream effector molecule of many cytokine signaling pathways. These cytokines can regulate the expression of Pim-1 via Signal Transducers and Activators of Transcription (STATs), which play an important role in many physiological and pathological processes such as cell proliferation, differentiation, apoptosis and tumorigenesis [2]. The structure and function of Pim-1 kinase show abnormal changes in a variety of human tumors [3-5]. The use of Pim-1 small molecule inhibitors or shRNA can inhibit tumor cell proliferation and promote apoptosis, which provides a new target for tumor therapy [6].

CD4+T cells are divided into 4 major functional subgroups of Th1, Th2, Th17 and Treg according to the differentiation and function characteristics, and the immune balance disorder among these subgroups is closely related to the occurrence and development of immune diseases such as Inflammatory Bowel Disease (IBD). Previous study reported that the levels of CD4+CD25+ Treg and Foxp3 in the peripheral blood of patients with IBD were significantly lower than those in the normal control group, and their levels were lower in IBD inflammatory activity period than in remission period [7]. In animal experiments, the decreased number or impaired function of CD4+CD25+Treg cells can lead to intestinal mucosal injury, which induced the occurrence of IBD. In addition, a large number of IL-17 secretion cells existed in the intestinal mucosa of IBD patients with acute inflammation, suggesting that Th17 cells are involved in the pathogenesis of IBD [8]. Our previous study showed that inhibiting Pim-1 in animal model of ulcerative colitis could inhibit macrophage activation and Th1, Th17-based inflammatory response [9]. Therefore, we wondered that Pim-1 may regulate the differentiation of CD4 T cells. In this study we isolated naïve CD4+T cells from the spleen of the mice and treated them with cytokines and Pim-1 inhibitor to investigate the role of Pim-1 kinase in the differentiation of naive CD4+T cells into Th1 and Th17 cells.

Isolation and culture of CD4+T cells

BALB/c mice were sacrificed and immersed in 75% ethanol for 3-5 min, and the spleen was removed on clean bench. 4 ml of mouse lymphocyte separation solution and 200 mesh nylon mesh were placed in a Petri dish. The spleen was placed on the nylon mesh and grinded with a syringe piston, and then immediately transferred to a 15 ml centrifuge tube loaded with 2 ml RPMI 1640 medium. At room temperature, T lymphocytes were separated at 2000 r/min centrifugal for 15 min, washed 2 times with PBS, and spleen CD4+T cells suspension was purified by a magnetic bead cell sorting system (Miltenyi Biotech) following the manufacturer’s protocols. The purified cells were suspended in RPMI 1640 medium supplemented with 10% fetal bovine serum, and cultured at 37°C in a humid environment containing 5% CO2 for 24 h. Trypan blue exclusion was performed to detect cell viability.

The experimental data were expressed as mean ± Standard Deviation (SD), one factor analysis of variance was used to compare the data differences between groups, p<0.05 was considered statistically significant. 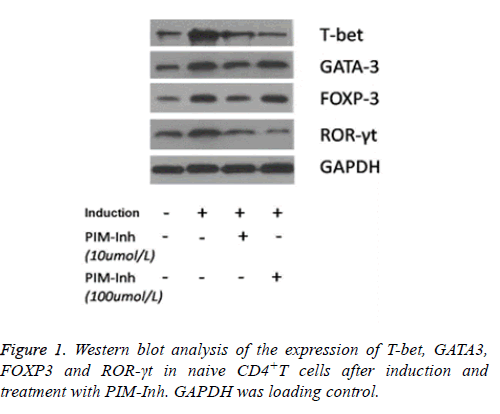 Figure 1: Western blot analysis of the expression of T-bet, GATA3, FOXP3 and ROR-γt in naive CD4+T cells after induction and treatment with PIM-Inh. GAPDH was loading control. 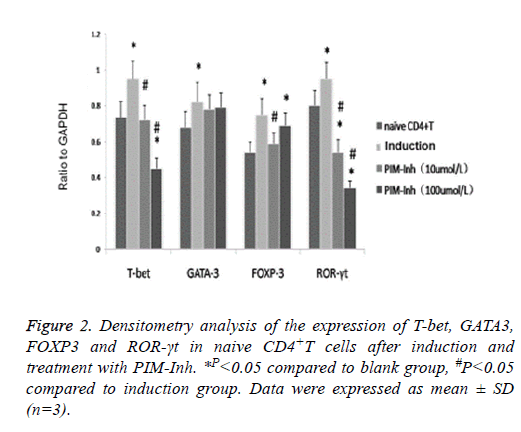 Figure 2: Densitometry analysis of the expression of T-bet, GATA3, FOXP3 and ROR-γt in naive CD4+T cells after induction and treatment with PIM-Inh. *P<0.05 compared to blank group, #P<0.05 compared to induction group. Data were expressed as mean ± SD (n=3).

Pim-1 inhibitor inhibited the secretion of IFNγ and IL17 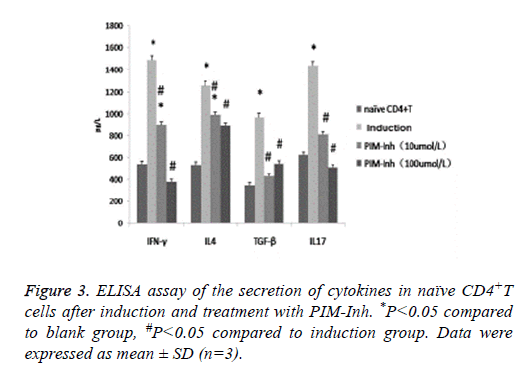 Pim-1 is mainly expressed in the thymus, spleen, bone marrow and fetal liver and other hematopoietic organs [1,2]. In our previous study we found that Pim-1 was related to Th1 and Th17 based inflammatory response during ulcerative colitis [9]. In this study, we isolated naïve CD4+T cells from the spleen of the mouse in which Pim-1 is expressed, and then used different doses of PIM-Inh to inhibit Pim-1 for pretreatment, 2 h later different agents were used to induce the differentiation of CD4+T cells. Compared with the control group, the corresponding nuclear transcription factor and cytokines increased significantly in the induced group, suggesting that the differentiation of naïve CD4+T cells was successfully induced. After treatment with PIM-Inh, T-bet, ROR-γt, IFNγ and IL17 levels were significantly inhibited, suggesting that blocking Pim-1 could inhibit the differentiation of naive CD4+T to Th1 and Th17, but had no obviously effect on the expression of FOXP3 and GATA-3. These results suggest that Pim-1 is involved in the differentiation of Th1 and Th17.

Taken together, our study suggests that Pim-1 kinase promotes the differentiation of naïve CD4+T cells into Th1 and Th17 cells, and blocking Pim-1 may have important implication for the treatment of inflammatory response.

This work did not receive any funding or support.