The present work reveals the preliminary phytochemical screening and the study of antimicrobial activities of Costus speciosus (Koen) and Sea Qust. These are medicinal plants of considerable importance. Carbohydrates, Tannins, Steroids, Anthocyanates and Proteins were detected in both plants. Alkaloids, saponines, Anthraquinones were present in Costus speciosus but where absent in Sea Qust. The antibacterial and antifungal activity of essential oils and plant extracts of Costus Speciosus and Sea Qust was investigated against a few pathogens viz. M. gypseum, M. canis, C. albicans and C. tropicalis, P. aeruginosa and S. aureus, P. aeruginosa and St. aureus. The data obtained validated their wide application for therapeutic purposes in alternative therapy.

There has been a virtual explosion of interest in alternative therapy. The use of the herbal remedies has become more and more popular because of most people believe that herbal products are superior to manufactured products, less expensive than synthetic drugs and they are not satisfied with the result they get with manufactured medicines [1]. In addition to this most of herbal products are categorized under GRAS (Generally Recognized as Safe) for human consumption, and efficient and rarely have side effects [2].

The medicinal properties and the biological evaluation of plants have been valued by every culture and civilization in the world. It is focused on the botany, phytochemical composition [3]. Medicinal plants contain some important organic compounds such as tannins, carbohydrates, terpenes, alkaloids, steroids, falvonoids and coumarines. Under in vitro conditions, these organic constituents inhibit the growth of all types of microorganisms [4]. For those reasons, the medicinal plants are currently used as alternative therapy to antibiotics for many pathogenic microorganisms. Studied indicated that crude ethanol extracts obtained from plant species had antifungal activities against C. albicans and Cladosporium cucumerinum. Further, the ethanol extracts also had bacteriostatic and even bactericidal effects on S. aureus and E. faecalis. These are pathogenic microorganism for the human [5]. Trichophyton mentagrophytes and Trichophyton rubrum are a species of dermatophytes, and they recorded a high sensitivity when the treatment by methanol extracts of Eupatorium buniifolium and Terminalia triflora.

The MICs ranging was of 100 to 250 microg/ml [6]. Costus afer is one of 218 plants which were registered for antibacterial activity against Staphylococcus aureus, Mycobacterium fortuitum, Bacillus cereus and Candida albicans [7]. Costus specious and Sea-Qust are belong to Costaceae (Zingiberaceae) family which constitutes a vital group of rhizomatous medicinal and aromatic plants. Besides their therapeutic significance, they are also important source for the extraction of export-quality essential oils and oleoresins [3]. The dried root and aquatic extracts of Indian Costus and Sea-Qust were a high inhibitory on Aspergillus niger, A. flavus and C. albicans growth [8]. Hence the aim of this study was to obtain the important organic compounds of Sea-Qust roots and examine their effectiveness against pathogenic microbes. It has confirmed the fatal influence of dried root and aquatic extracts of Indian Costus and Sea-Qust on Escherichia coli, P. aeruginosa, S. aureus and K. pneumonia [9].

(Indian Costus and Sea Qust) rhizomes were washed with water and dried and then ground well. All the rhizomes collected from several herbalists at (Jeddah, Saudi Arabia). The powder of rhizomes has been used in the chemical experiments [8-10].

(500 g) of dried roots of Indian Costus or Sea Qust were using for steam distillation for four hours. About 45 ml of the distillates were collected and extracted with chloroform (3 × 100 mL) and dried over anhydrous sodium sulphate (Merck, Germany), and the solvent was removed by evaporation. The yields were (0.60-0.65%) stored in a refrigerator (+ 6°C).

200 g of the dried and powdered form roots of Indian Costus or Sea Qust were extracted successively using cold percolation system [11] ethanol, methanol, distilled water or chloform (400 ml. for each) for 4 days, using a stirring apparatus. Then collected solutions were filtered through Whatman filter paper. The extracts were concentrated by using a Rotary evaporator at 600°C. The respective extracts were stored under freeze condition at -180°C until used for further analysis.

Preparation of alcoholic extracts for screening

200 gm of dried powder of Indian Costus or Sea Qust was extracted with about 800 ml of 70% v/v methanol for 4 days at room temperature using a stirring apparatus. The extract was filtered and the solvent was distilled off in a rotatory evaporator at 400°C. The extract was concentrated to dry residue in a desiccator over anhydrous Sodium Sulphate. The resulting extracts were filled into sample container.

Standard procedures were adopted for the phytochemical screening.

Test for tannins: To about two grams of the ethanol extract of the sample, a few drops of 5% ferric chloride solution were added. A dark green or bluish-black coloration show the presence of tannins [12].

Test for flavonoids (Shinoda Test): To two grams of the ethanol extract, a few fragments of magnesium ribbon were introduced. To this, 6 drops of concentrated hydrochloric acid were added. If a pink or red colour is obtained, the presence of flavonoids is indicated [13].

Test for saponins: To about five grams of ethanol extract, 5 ml de-ionized distilled water was added. On vigorous shaking, the formation of a persistent froth that lasted for 15 minutes indicated the presence of saponins [14].

Test for terpenoids (Salkowwski Test): In a test tube 0.5 gm of the extract was taken and about 2 ml of chloroform was added to it. To this, 3 ml of conc. H2SO4 was carefully introduced to form a layer. If a reddish brown colour is obtained, presence of terpenoids is indicated [15].

Test for carbohydrates (Molisch’s Test): One gram of the ethanol extract was dissolved in a few drops of water. Then 1 ml of conc. Sulphuric acid was added along the walls of the test tube. On this addition, if a red or violet zone is visible at the interphase of the oil-water layers, carbohydrates and /or glycosides are indicated in the sample [16].

Test for anthraquinone (Bontrager’s Test): To one gram of the ethanol extract, 5 ml of benzene was added. Then it was shaken and filtered. Five ml of 10% NH4OH was added to the filtrate, followed by shaking of the contents. The formation of a red, pink or violet colour in the lower ammoniacal phase confirmed that free anthraquinones are present in the sample [16].

Test for cardiac glycosides (Keller-Kilani Test): To the Ethanol extract, 2 ml of glacial acetic acid containing 1-2 drops of 2% solution of FeCl3 was added. This mixture was then introduced into another test tube that contained 2 ml of concentrated H2SO4. The appearance of brown ring at the interphase indicated that cardiac glycosides are present in the sample [13].

Test for coumarins: One gram of ethanol extract of the sample was taken in a test tube. The test tube was then covered with a filter paper that is moistened with dil. NaOH. The sample was then heated on water bath for a few minutes. The filter paper was then examined under UV (365 nm). If a yellow fluorescence is obtained, the presence of coumarins is indicated [17].

Test for steroids (Liebermann-Burchard Test): One gram of ethanol extract was taken. This was followed by the addition of 2 ml of acetic acid. The solution was cooled in an ice bath. After the cooling, conc. Sulphuric acid was added carefully. The development of colour from violet to blue or bluish-green is a positive test for the presence of a steroidal ring [16].

Test for alkaloids: To one gram of ethanol extract, 2 ml of 1% HCl was added and the contents were heated gently. This was followed by adding 2-3 drops of Mayer’s reagent. The appearance of white or cream precipitate confirm the presence of alkaloids [13,14]. Table 1 shows the presence of phytochemical screening of ethanolic extract of rhizomes of Costus specious and Sea-Qust.

Table 1: Phytochemical constituents of rhizomes of Indian costus and Sea-qust.

About 0.5 and 1.25 ml of essential oil, ethanolic and methanolic extracts of Sea Qust have been added into sabaroud dexterous ager media and blood ager media using agar disc diffusion method. All the media were inoculated by 1 ml from suspension of M. gypseum, M. canis, C. albicans and C. tropicalis (sabaroud dexterous ager) and P. aeruginosa and St. aureus (blood ager). The incubation of fungi and yeast using agar disc diffusion method. Days and 48 hours respectively at 25°C. Whereas, The bacterial incubation was 24 hours at 37°C, then the diameter of inhibition zones was measured by millimeters [18-20].

The results of the qualitative phytochemical analysis and screening of Costus Speciosus and Sea Qust are presented in Table 1. These results indicate the differences in the presence of medically active components in these two plants. It could be inferred from Table 1 that carbohydrates, tannins, steroids and anthocyanates were present in both the Costus speciosus and the Sea Qust. Others like cardiac glycosides, coumarines, terpenoids were absent in both. Alkaloids, saponines, Anthraquinones were present in Costus speciosus but were absent in Sea Qust. Sea Qust extracts demonstrated a high antimicrobial activities on the tested fungi, yeast and bacteria.

At 0.5 and 1.25 m of essential oil the inhibition zone was increased. The measures were (75, 85, 80 and 85 mm) for M. gypseum, M. canis and C. albicans. Ethanol and methanol extracts showed same efficiency at 1.25 m, but the effect decreased at 0.5 m relatively when compared to essential oil results (Figure 1). M. gypseum hyphae and spores damaged and the morphological shape changed when M. gypseum treated by essential oil extract, that effect showed in SEM images (Figures 2 and 3) . The results of Sea Qust extracts showed same effects on pathogenic bacteria, whereas their growth has been affected when the treatment by 1.25 m of extracts (Figure 4). 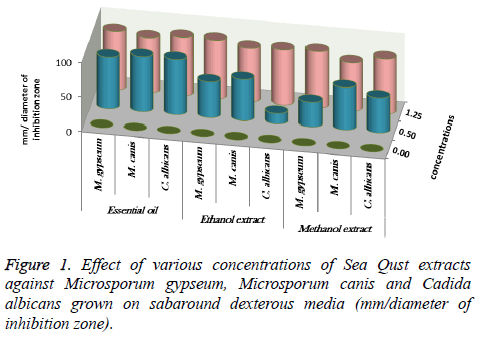 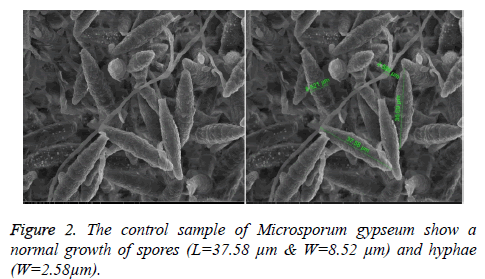 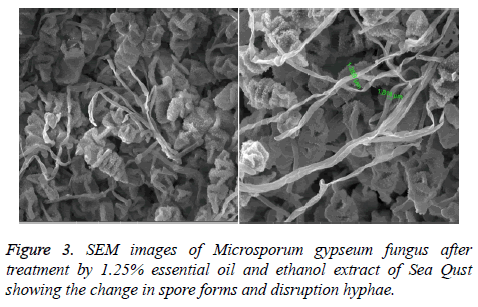 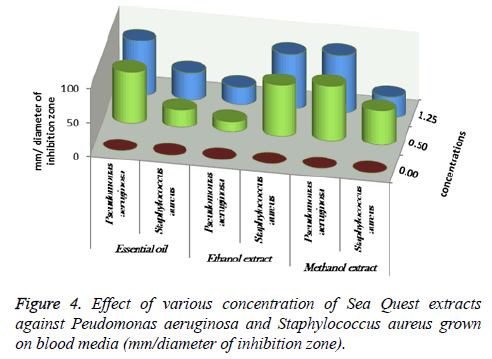 Essential oil and methanol of Sea Qust were highest effect then ethanol extract on P. aeruginosa, the measures of inhibition zone were 75, 80 and 85 mm at 0.5 and 1.25 m of it. The growth of S. aureus was most sensitivity and the measures were 75&80 mm when the treatment by Sea Qust ethanolic. These results indicated that efficacy of chemical extracts on the microbial tested.

The recorded results in this study demonstrated efficiency of chemical extracts of Sea Qust. Our results are compared with Habsah et al. [21] who found a very high antibacterial and antifungal activities in dichloromethane and methanol extracts of Alpinia, Costus and Zingiber species. The essential oil, methanol and ethanol extracts of Costus arabicus show antimicrobial properties against wide spectrum of bacteria (both gram-positive and three gram-negative species), one fungal stain and three resistant Staphylococcus strains. This plant is used as traditional medicine for human cancer cell [22]. The medicinal plant Costus speciosus has antioxidant activity as evident from the treatment of diabetic male treatment by costunolide and eremanthin. These constituents were isolated from this plant and ananlyzed by gas chromatography-mass spectrometry (GC-MS) analysis [23,24]. Dried roots and aquatic extracts (hot and cold) of Indian Costus and Sea Qust have exhibited antifungal activities against Aspergillus niger, A. flavus, A. fumigatus and C. albicans which cause respiratory diseases [8,25]. Presently, AL-Kattan observed fatal effects of Indian Costus and Sea- Qust roots on S. areus and K. pneumonia [9]. The percentage inhibition was 100% at 15 & 20%. This effect continued when the bacterial growth was taken after 48h and repeated it on the same concentration three times. Furthermore, it is showed that effect on C. albicans and A. niger 7 whereas, the growth and budding of yeast decreased at 25% of Indian Costus (hot and cold) aquatic extracts [8]. Also A. niger spores didn't grow and hyphae disruption at same concentration of Sea Qust. Consequently those results have been comported with our SEM figures in this study. Thus, chemical extracts of Sea Qust have antimicrobial activities on dermatophytes which can be used as natural alternatives to treat these diseases.