Ziziphus genus, belongs to Rhamnaceae family, is traditionally used to cure various human ailments. The root barks of Ziziphus nummularia are reported to have sedative-hypnotic, antipyretic and analgesic purposes [1]. In traditional Chinese medicine, suan zao ren (Ziziphus spinosa) is believed to nourish the heart, and supplement to the liver blood. It is used to treat irritability, insomnia and heart palpitations [2-5]. In Saudi Arabian folk medicine, the leaves of Ziziphus spinachristi (jujube) are used to heal wounds, treat some skin diseases, some inflammatory conditions, sores, against ringworm, fever, gonorrhea, sex diseases and ulcers. The decoction of the bark and fresh fruits is used as a body wash, used to promote the healing of fresh wounds and also used to cure dysentery, bronchitis, cough and tuberculosis [6-9].

In view of the medicinal importance of Z. spina-christi, the aim of this study is to extract different fractions from the bark of Z. spina-christi for their antimicrobial and cytotoxic evaluations as well as phytochemical screening.

Fresh bark of the Z. spina-christi were collected from the Hail region with GPS coordinates (270 29\05\\N, 410 41\44\\E), (270 30\51\\N, 410 42\01\\E), (270 32\18\\N, 410 41\42\\E), (260 0\21\\N, 400 28\20\\E), Saudi Arabia. The plant was identified and the specimen deposited in the Herbarium of the Department of Biology, University of Hail. Z. spina-christi bark (5.2 kg) was air dried and extracted with absolute ethanol repeatedly (3 times × 20 L). The ethanol extract was filtered, charcoaled and then solvent was evaporated under reduced pressure which yield powdered solid (119.6 g). The ethanol extract was partitioned between aqueous layer and ethyl acetate layer. Ethyl acetate layer was dried and solvent was removed under vacuum to obtain Ethyl Acetate (EA) extract. Aqueous layer was further extracted with ethyl acetate with the drop wise addition of ammonia solution till it become alkaline. The solvent was removed under vacuum to obtained Alkaline Ethyl Acetate (AEA) extract.

Separation and purification of the plant metabolite

Agar well-diffusion assay: All plant extracts were screened against fungi (Aspergillus fumigatus: RCMB 02568, Syncephalastrum racemosum: RCMB 05922, Geotricum candidum: RCMB 05097, Candida albicans: RCMB 05036), gram positive (Streptococcus pneumoniae: RCMB 010010, Bacillis subtilis: RCMB 010067), and gram negative bacteria (Pseudomonas aeruginosa: RCMB 010043, Escherichia coli: RCMB 010052) by using agar well diffusion method. Test organisms were obtained from the Regional Center for Mycology and Biotechnology (RCMB), Cairo, Egypt. The microorganisms were uniformly seeded in sterile malt agar plates for fungi and sterile nutrient agar plates for bacteria. A small well is created (1 cm diameter) in the agar using sterile cork borer and filled with the extracts or standard drugs (100 μL). Standard drugs, such as amphotericin B, ampicillin, and gentamicin were used as positive control. Plates were left in a cooled incubator at 4°C for one hour for diffusion and then incubated at 37°C for tested bacteria and 28°C for tested fungi. Inhibition zones developed due to active antimicrobial metabolites were measured after 24 h of incubation for bacteria and 48 h of incubation for fungi. The clear zone of inhibition in mm was taken as a degree of antimicrobial sensitivity. All experiments were done in triplicate.

Minimum inhibitory concentration (MIC) determination: The MIC of extracts was determined in 96 well microtiter plate using the microdilution broth method [35]. The standard drugs were dissolved in sterile distilled water. The stock solution of the extracts was prepared in DMSO. The dilutions in the test medium were prepared at the required concentration of 512-0.5 μg/ml, and for reference compounds at 64-0.0625 μg/ml. It was established that dilutions of DMSO lacked antimicrobial activity against any of the test microorganisms. The microtiter plates were incubated at 37°C for tested bacteria and 28°C for tested fungi and were readied using microplate reader after 24 h for bacteria and after 48 h for fungi. IC50 was expressed as the concentration (mg/ml) of plant extract necessary to produce a 50% reduction of bacterial culture growth. It was calculated with the calibration curve by linear regression.

HCT-116 (colon carcinoma cells) and MCH-7 (breast carcinoma cells) were obtained from VACSERA Tissue Culture Unit. The cells were propagated in Dulbecco’s modified Eagle’s medium (DMEM) supplemented with 10% heat-inactivated fetal bovine serum, 1% L-glutamine, HEPES buffer and 50 μg/ml gentamycin. All cells were maintained at 37°C in a humidified atmosphere with 5% CO2. For cytotoxicity assay, 0.1 ml of cell suspension containing 10,000 cells was seeded in each well of a 96 well microtitre plate (Falcon, NJ, USA). Fresh maintenance medium containing different dilutions of the test sample was added after 24 h of seeding. Control cells were incubated without test sample. The microtitre plates were incubated at 37°C in a humidified incubator with 5% CO2 for a period of 48 h. Six wells were used for each concentration of the test sample. The number of viable cells was determined using MTT assay [36] by ELISA reader and the percentage of viability was calculated as (1- (ODt/ODc)) × 100% where ODt is the mean optical density of wells treated with the bark extracts and ODc is the mean optical density of untreated cells.

Phytochemical study on Z. spina-christi leaves showed the presence of four saponin glycosides in the butanol extract [19]. As christinin-A was the major saponin glycoside, the butanol extract and chistinin-A were used to evaluate the potential antidiabetic activity and toxicity of Z. spina-christi leaves [37]. Preliminary phytochemical analysis showed the presence of major classes of secondary metabolites such as tannins, alkaloids, flavonoids, cardiac glycosides, etc. in both of the extracts. Saponins, protein and amino acids were absent in both the extracts. Seed extract showed the absence of steroids and terpenoids while their presence was revealed in fruit extract [38]. In our study, phytochemical analysis for the ethanolic extract, ethyl acetate extract and alkaline ethyl acetate extract were carried out. For the ethanolic extract, copious presence of tannins, flavonoids, terpenoids, carbohydrate and saponin glycosides and alkaloids were obtained. While free and combined anthraquinones were absent. Carbohydrates were absent also in the diethyl ether extract (Table 1).

The results of preliminary phytochemical screening confirmed the presence of various classes of secondary metabolites in the ethanol extract of the bark of Z. spina-christi including poly phenols (tannins and flavonoids). Plant polyphenols are important dietary antioxidants because they possess an ideal structural chemistry for free radical scavenging activity. Numerous in-vitro studies have conclusively shown their antioxidant potential in protecting against many diseases [39].

Data are expressed in the form of mean ± SD, Values not sharing a common superscript differ significantly at p<0.05 (DMRT), -: No activity. *Amphotericin B, ampicillin and gentamicin are used as positive control against fungi, gram positive bacteria and gram negative bacteria, respectively.

Agar diffusion technique is considered as a qualitative test for initial screening of antimicrobial activity. It is not an appropriate method for the quantitative evaluation of Minimum Inhibitory Concentration (MIC), as it is impossible to quantify the amount of extract diffused into the agar medium. In this study, MIC of extracts was tested by microdilution broth method. The results in Table 4 confirm that AEA extract has lowest MIC as compared to EA extract against all the sensitive microorganisms. The MIC of AEA extract ranged from 1.95 to 3.90 μg /ml (EA extract: 32.3 to 62.5 μg/ml) against grampositive bacteria, 62.5 mg/ml (EA extract: No activity) against gram-negative bacterium (E. coli), and ranged from 3.90 to 32.3 μg /ml (EA extract: 62.5 to 125 μg/ml) for fungal strains. These results illustrate that a gram-positive bacteria were more susceptible to this extract as compared to gram-negative bacteria. The unique nature of Gram-negative bacteria, such as the presence of two external layers over cytoplasmic membrane and strong hydrophilicity of the outer membranes, explains their strong resistance to Z. spina-christi extracts.

HPLC analysis of bark extracts indicates the presence of saponins in Z. spina-christi. Saponins have a number of pharmacological effects, including the antibacterial effect. The presence of sponins may be responsible for their antibacterial activity [20]. Phytochemical investigation also showed that the bark of Z. spina-christi is rich in tannin and phenolic compounds, which have been shown to possess antimicrobial activities against a number of microorganisms [41,42].

The cytotoxic activity of the EA and AEA extracts of Z. spinachristi (in a concentration of 50-400 μg/well) was investigated in HCT-116 and MCH-7 cell lines. The control cells showed high proliferation that has been taken as 100%. Both extracts induced dose-dependent reduction in the viability of cell-lines (Figures 1 and 2). The IC50 of EA extract in HCT-116 and MCH-7 cells was >400 μg/well and 397 μg/well, respectively. The IC50 of AEA extract in HCT-116 and MCH-7 cells was >196 μg /well and 164 μg /well, respectively. The results indicate that the AEA extract showed higher cytotoxic effect as compared to EA extract. AEA has higher amount of flavonoids and alkaloids as compared to EA extract (Table 1). Flavonoids [43,44] and alkaloids [44] isolated from several plants have shown cytotoxic effects in different cell lines. These phytochemicals may be responsible for the cytotoxic effects of the bark of Z. spina-christi. Phytol, the major phytochemical constituent in the bark of Z. spina-christi (Table 2), is also reported to possess potent cytotoxic effects [45]. 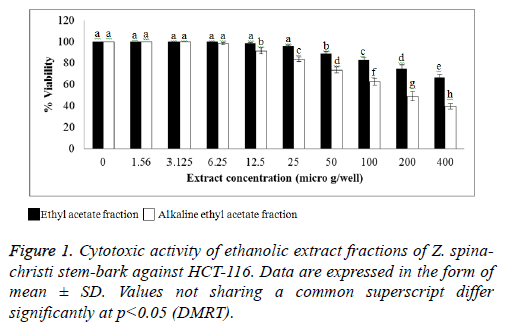 Figure 1: Cytotoxic activity of ethanolic extract fractions of Z. spinachristi stem-bark against HCT-116. Data are expressed in the form of mean ± SD. Values not sharing a common superscript differ significantly at p<0.05 (DMRT). 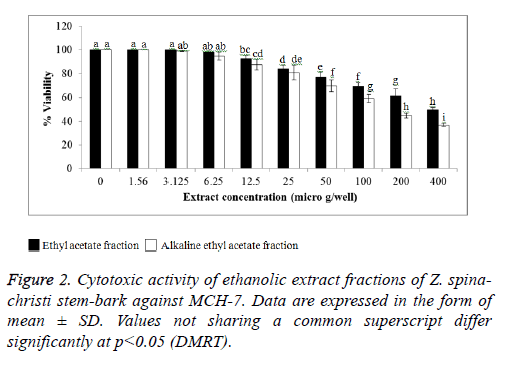 Figure 2: Cytotoxic activity of ethanolic extract fractions of Z. spinachristi stem-bark against MCH-7. Data are expressed in the form of mean ± SD. Values not sharing a common superscript differ significantly at p<0.05 (DMRT).

This work was supported by King Abdulaziz City for Science and Technology (KACST grant No. -ب.ص 35-88 ).