Physicochemical characterization of vancomycin and its complexes with ?-cyclodextrin

The equimolar complexes of vancomycin, a broad-spectrum glycopeptides antibiotic with β- cyclodextrin were prepared to evaluate their suitability for the development of a prolongedrelease form of the antibiotic. Complex preparations were subjected to kneading and freezedrying techniques and characterized using X-ray powder diffractometry (XRD), Thermogravimetric analysis (TGA), Scanning electron microscopy (SEM) and Fourier transform infrared spectroscopy (FT-IR). The uniformity obtained from all of the analyzed results, suggests the successive formation of the aforementioned binary systems. The in vitro dissolution profiles of vancomycin were determined accordingly in a simulated cerebrospinal fluid where the results showed a modified release with improved bioavailabity of vancomycin was achieved upon complexation with beta-cyclodextrin. Our results therefore demonstrated that the use of cyclodextrin could be advantageous not only for lipophilic drugs but also for hydrophilic drugs.

For years, cyclodextrins (CDs) have attained great attention in the field of drug formulation and delivery owing to their unique capability to form inclusion complex with a wide range of molecules ranging from solids, liquids and gases [1]. Inclusion in CDs exerts profound effects on the physicochemical including improved of solubility, stability and bioavailability of the entrapped guest molecules, mostly reported for lipophilic drugs. This is achieved through the formation of a host-guest complex where the guest molecule is temporarily caged whether as a whole or some part of it into the host cavity [2,3]. Meanwhile, report upon interaction of CDs with hydrophilic drugs remained scarcely explored even though such interaction may also result in similar effects [4-6]. Vancomycin is an amphotheric gylcopeptide antibiotic primarily effective against serious infections caused by gram-positive cocci [7]. It exhibits a slow anti-bacterial activity with low MIC and limited penetration into cerebrospinal fluid (CSF). Frequent infusion of vancomycin for weeks is then required to achieve a constant bacterial level in blood which may also result in better CSF penetration. This is due to its activity which merely last for 8 to 12 h [8]. The present study was designed to study the effect of beta-cyclodextrin on the delivery pattern of vancomycin upon complexation. The freeze-dried and kneaded complexes of the two molecules formed were characterized using X-ray powder diffractometry, Thermogravimetric analysis, Scanning electron microscopy and Fourier transform infrared spectroscopy. The in vitro dissolution profiles of vancomycin were recorded accordingly in a simulated cerebrospinal fluid.

Beta-cyclodextrin, potassium bromide (KBr), methanol (HPLC grade), ethanol and phosphate buffer solution (PBS) were purchased from Sigma-Aldrich, (USA). Vancomycin was obtained from Cheil Jedang, (Korea). Water used throughout the study was double-deionized. Materials for the preparation of the artificial cerebrospinal fluid (aCSF) were similar to [9].

Freeze-drying : A mixture of an equal molar (6.73 x 10-3 M) of 382 mg beta-cyclodextrin and 500 mg vancomycin was dissolved in 50 mL of deionized water. The mixture was stirred for 48 hours at room temperature until homogeneity and equilibrium were reached. The solution was filtered using a 0.45 μm membrane filter to remove insoluble ingredient, if any. The resulting solution was then frozen at - 20 0C for 24 hours and further lyophilized over a period of 36 hours using a freeze-dryer (Thermo Scientific, USA).

Kneading: 500 mg of vancomycin and 382 mg of beta cyclodextrin were mixed in a ceramic mortar with a pestle for 5 minutes. 1 mL of 1:1 ethanol-water (v/v) was added to the mixture and the paste was further kneaded for another 10 minutes. Then the product was dried at 55 0C for 24 hours.

X-ray powder diffractometry (XRD): The diffractograms were recorded at room temperature using monochromatic radiation at 40 mA and at 40 kV in the 2θ angle range from 0 – 600, using D5005 X-ray diffractometer (Bruker, Germany). The angular increment was set at 0.002 0 / s with the scan speed of 10 / min.

The thermal gravimetric analysis was performed using a thermal analyzer (TG-DTA 92 16.18, Setaram, France). In brief, approximately 10 mg of each sample was weighed into an aluminium crucible and placed into a preequilibrated furnace at ambient temperature. After 5 minutes of equilibration at this temperature, the sample was heated from 20 – 700 0C at the heating rate of 10 0C / min under dynamic argon atmosphere. The change in weight with respect to the temperature was recorded.

The surface morphology images were recorded for beta cyclodextrin, vancomycin and also the complexes obtained from both freeze-drying and kneading techniques. The images were captured by using an electron microscope (LEO Supro 50 VP FESEM, Carl Ziess, Germany). The samples were fixed on a brass stub using double-sided tape. Prior to the analysis, the samples were gold sputtercoated to render them electrically conductive.

Standard solutions preparation : A 500 μg/mL stock solution of vancomycin was prepared in a standard artificial cerebrospinal fluid (aCSF) solution. The protocol for the preparation of aCSF was adapted from [9]. All chemical stocks were obtained from Sigma Aldrich. Standard vancomycin solutions ranging from 10 – 400 ug/mL were obtained via serial dilution using a standard aCSF solution. The data collected was used to plot a standard calibration curve. The experiments were repeated in triplicate.

Chromatographic conditions : Chromatographic separation was obtained via a reversed phase-high performance liquid chromatography (RPHPLC). The HPLC (FCV-2AA Shimadzu, Japan) equipped with a UV/vis detector was used throughout the procedures. A symmetry C18 column (5 μm, 4.6 x 150 mm column, Waters, Ireland) was used as a stationary phase. The range of column temperature was from 22 – 40 0 C. The mobile phase used was a 90/10 (v/v) mixture of 25 mM phosphate buffered solution (PBS) pH 7.4 and methanol. The rate of flow was set at 1 mL/min, the injection volume was 20 μL and the detection wavelength was 220 nm. Each measurement was recorded in triplicate. All solvents were analytical grade reagents.

The release measurements were evaluated using USP type II (blade) apparatus (Pharmatest Dissolution Tester PTW II (Hainburg, Germany). In brief, the experiments were carried out on beta-cyclodextrin/vancomycin complexes and vancomycin alone. Approximately 300 mg of the vancomycin and samples of complexes corresponding to the equivalent amount of vancomycin were weighed and placed into the apparatus. A 900 mL of aCSF solution was used as the dissolution medium. The temperature was set at 37 + 0.5 0C and the speed of the blade was kept constant at 100 rpm. At fixed time intervals, 10 mL of each sample was withdrawn and replaced with an equivalent amount of fresh aCSF. The samples were later filtered through a 0.45 μm membrane filter prior to the analysis.

The one-way ANOVA test followed by a Tukey test (SPSS 18) was performed to identify statistical significances. p-value < 0.05 was considered to be statistically significant.

The XRD diffractogram (Figure 1) of pure betacyclodextrin obtained revealed a series of sharp and intense diffraction peaks which indicate its crystalline characteristic. Vancomycin is amorphous as observed from the absence of diffraction peaks and a broad spectrum. Meanwhile, the X-ray diffraction profiles for both complexes show a significant reduction of crystallinity where the kneaded complex was noted to be more crystalline in comparison to the freeze-dried complex. The loss of crystallinity in the complexes may signify the presence of reciprocal interactions between host and guest [10]. However, some characteristic peaks of beta-cyclodextrin were still detectable in the complexes XRD patterns thus indicating that there is no formation of a true inclusion complex. Similar phenomenon has also been reported for other lipophilic drugs [11, 12]. 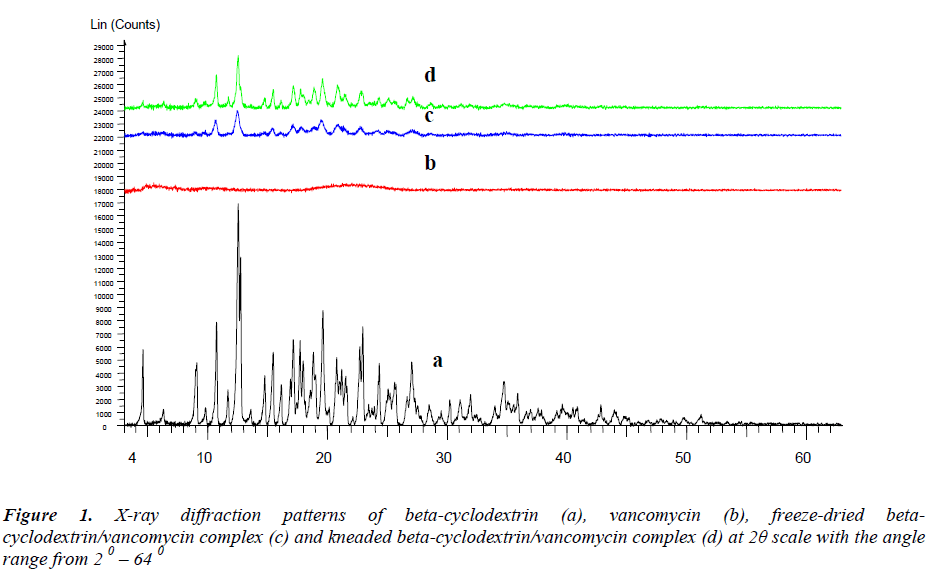 Beta-cyclodextrin presented three stages of weight loss (Figure 2). The first stage was recorded at 128 0 C. The weight loss at this stage indicates the loss of water molecules. Previous study has reported the presence of 11 water molecules, depending on the relative humidity in betacyclodextrin. Water molecules are included in the cavity and also located in the interstices between macromolecules. Consequently, weight loss found at 307 0 C was related to decomposition of CD structure due to the transition from solid to liquid phase [13]. 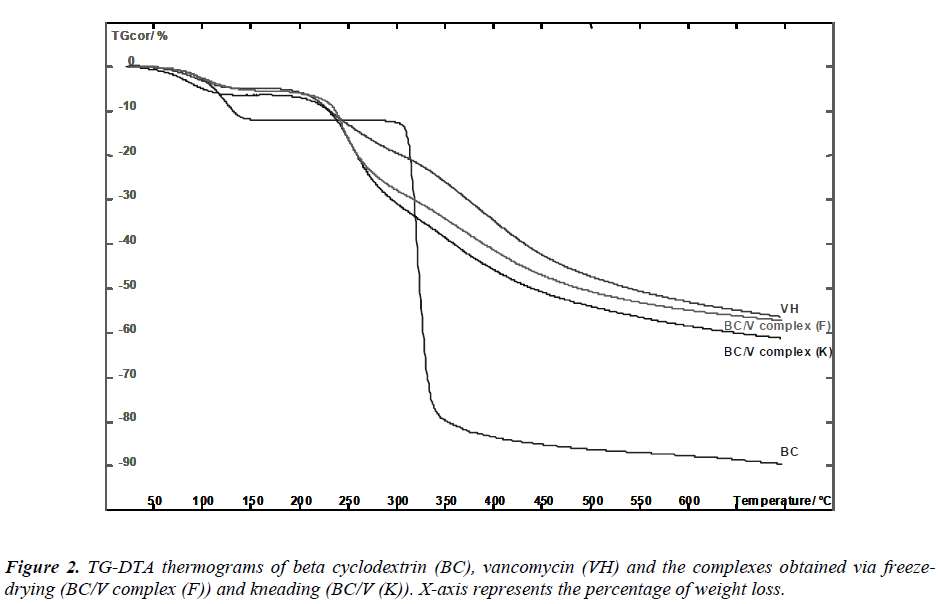 A relatively slow weight decomposition at 460 0 C was due to the thermal degradation of “char”, a residue formed during the second stage of beta-cyclodextrin decomposition [14, 15]. As for vancomycin and its complexes, the thermogram patterns resemble an amorphous solid as indicated by our XRD results. Amorphous solids soften gradually once heated and tend to have a relatively wide range for melting point, a zone between solid and liquid phase. We found that the dehydration patterns of both complexes were distinctive from the thermal behavior of betacyclodetxrin.

Lower percentage of weight loss was calculated from the complexes thermograms relative to the pure betacyclodextrin: 6.421 % for kneaded complex, 5.405 % for freeze-dried complex in comparison to 11.815 % for betacyclodextrin. This occurrence was due to: (i) reduction of crystallinity in the complexes permitted higher level of hydration. The wider ranges of dehydration temperatures of the complexes in comparison to the pure betacyclodextrin observed evidence this circumstance: 29.37 – 138.66 0 C for pure beta-cyclodextrin while 29.19 – 146.81 0 C and 29.19 – 157.78 0 C for the kneaded and the freezedried complexes, respectively (ii) formation of hydrogen bonding between water molecules and carboxylic groups of vancomycin. Particularly, the percentage of weight loss for the kneaded complex at this stage that was observed to be higher than the freeze-dried complex indicates larger fractions of vancomycin were encapsulated in the host cavity [14]. This suggests that better encapsulation efficiency was achieved via this technique. A change in the thermogram profile (Table 1) that include changes in weight loss and shifting/appearance of a new temperature peak signifies the formation of beta-cyclodextrin/- vancomycin complex [16].

From the images obtained in Figure 3, beta-cyclodextrin and vancomycin presented similar morphology as reported previously [17, 18]. SEM micrographs of both freeze-dried and kneaded complexes displayed amorphous and homogenous agglomerates with an uneven and porous surface. This morphology resulted from the reduction of crystallinity upon complexation. These observations were consistent with the XRD and the TGA data discussed previously. From the SEM images of the complexes, the disappearances of the morphologies of the raw materials were also observed. In short, the change of the particle shape and aspect in both of the complexes, indicate the presence of a new solid phase as a result of reduction of crystalinity habitus change in those binary systems [19-21]. 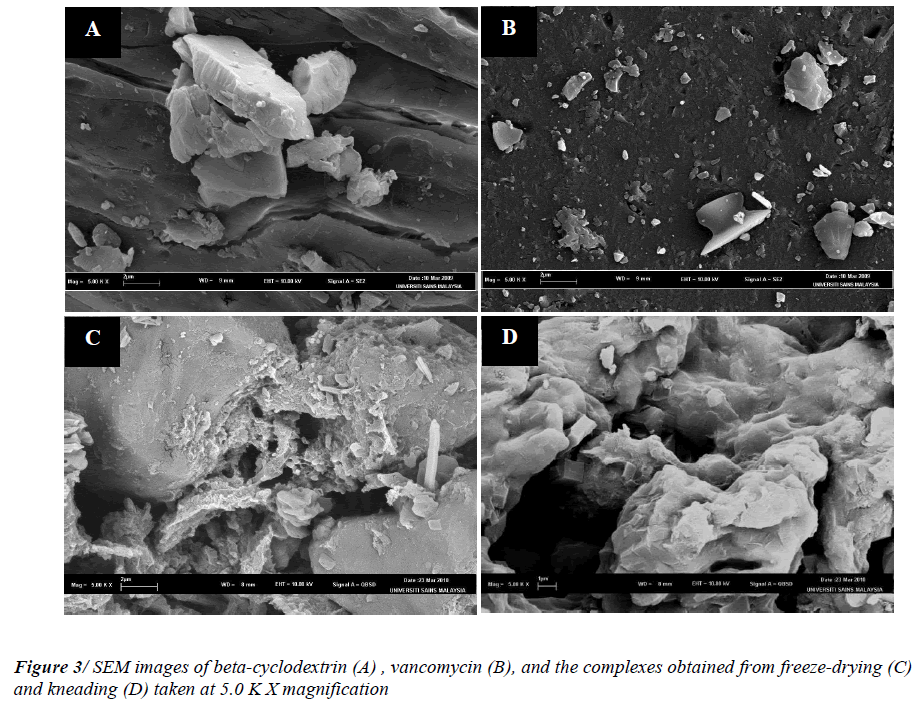 Figure 3: SEM images of beta-cyclodextrin (A) , vancomycin (B), and the complexes obtained from freeze-drying (C) and kneading (D) taken at 5.0 K X magnification

From Figure 4, the IR spectra of pure compounds were in full agreement with previously documented spectra of [22, 23]. Spectral variations include broadening, shifting and reduction in relative intensities were observed in both spectra of the complexes. 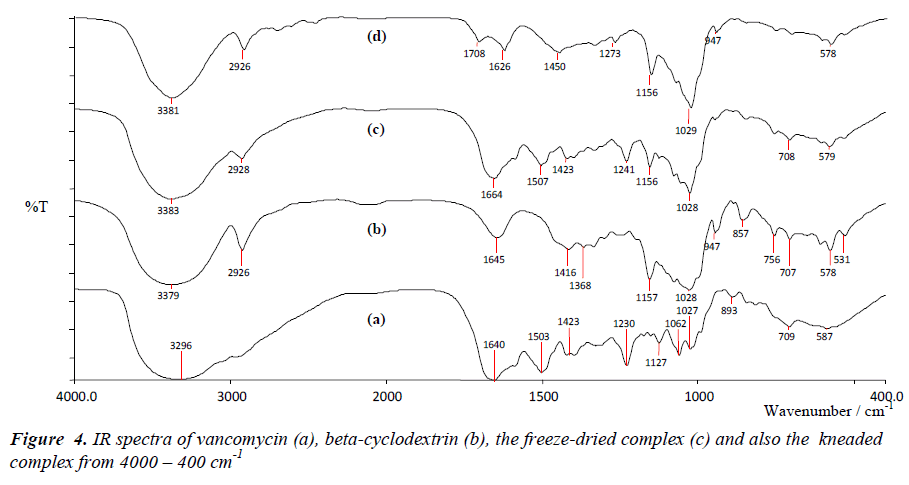 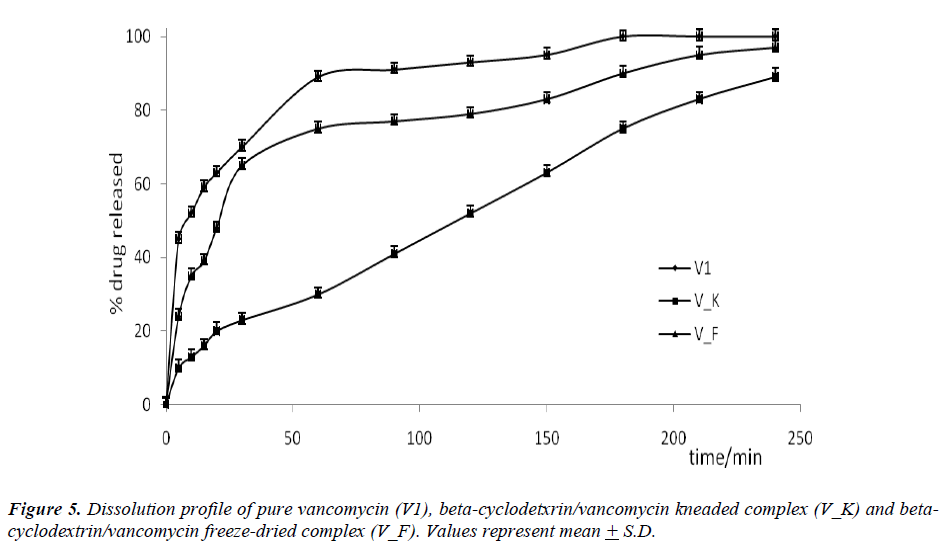 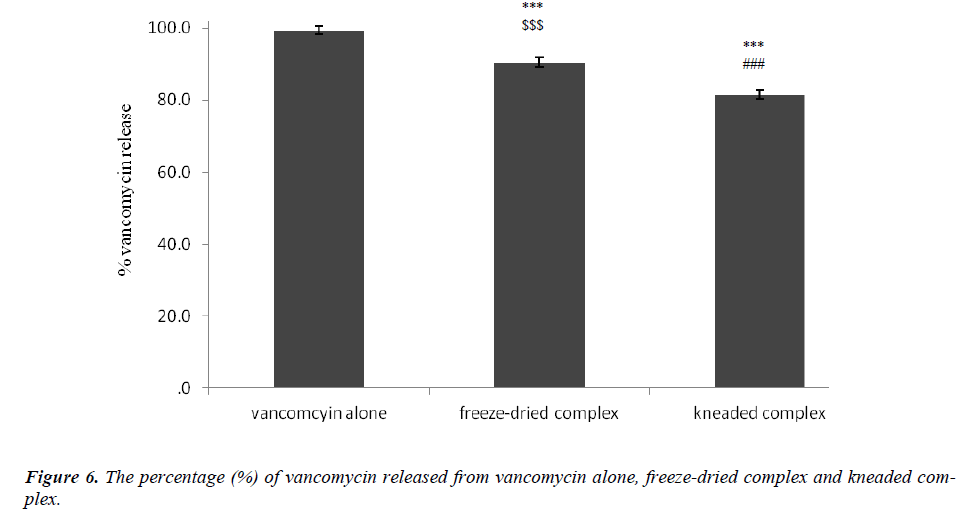 These occurrences suggest a weakening of the interatomic bonds as a consequence of an altered environment around these bonds upon complexation [22]. The IR patterns of the complexes however were dominated by the betacyclodextrin vibrational bands. Structurally, betacyclodextrin is huge in size as it is built up from seven repeating monomer units therefore its significant control on the IR profiles of the complexes should be expected. Furthermore, this finding suggests that only part of vancomycin was encapsulated in the beta-cyclodextrin cavity .The disappearances of several guest signals can be considered as a confirmation of the formations of the binary systems [22-25].

We would like to acknowledge Universiti Sains Malaysia for funding this research under the RU grant (1001/PPSK /812014) and also the Nancy-Université, Université Henri Poincaré (UHP) for the TGA and XRD services.