Mucositis, a serious complication in head and neck cancer patients could be the cause for, or consequence of decreased activity of granulocytes in oral mucosal secretions. This in turn may be attributed to poor body immunity in such patients. In the present study, the phagocytic activity of peripheral blood granulocytes was evaluated to understand its role in mucositis,and concurrent immunosuppression. Granulocytes from 15 oral cancer patients were collected and tested for phagocytic activity, by assessing the percent phagocytosis and phagocytic index of the granulocytes towards candida albicans before and after radiotherapy. The results were compared with normal healthy subjects(n=15).Percent phagocytosis decreased significantly (p<0.001) in baseline samples compared to controls as well as in post treated samples when compared to baseline samples(p<0.05). Phagocytic index decreased significantly in the post treated samples as against the baseline samples (p<0.05) although the changes were non significant between controls and patients. This decrease in phagocytic activity was coupled with progressive mucositis , which suggests that the decreased functional activity of the peripheral granulocytes could be the underlying cause for the altered immune response in cancer patients subjected to radiation.

The phagocytic capacity of leukocytes is significantly activated in the presence of a pathological process in the organism. Peripheral blood monocytes and tumor associa-ted monocytes are cytotoxic towards tumor cells, by way of ROS production showing markedly increased phagocy-tic activity [1,2]. However, this phagocytic function may be affected by different modalities of treatment [3]. Mucositis following RT is one of the various complica-tions of RT in head and neck cancers. Oral mucositis is an acute oral mucosal inflammatory reaction secondary to cell death of the basal cell lining of the oral mucosa.In such patients there was a decreased activity of granulocy-tes in oral mucosal secretions [4]. Neutropenia is a com-mon observation in RT. The present study aims at assess-ing the functional activity of peripheral blood monocytes following RT in oral cancer,inorder to understand the cause for systemic immune suppression in such patients.

15 cases of squamous cell carcinoma of the oral cavity and oropharynx aged between 30 and 70 yrs belonging to both genders were considered for the study and compared with 15 age and sex matched controls. Stage III and stage 1V of cancers (TNM staging) were selected who were included in the category PS-KP<70% [1]. These patients had no previous history of treatment. Those with severe systemic illness like Diabetes mellitus, coronary artery disease and tuberculosis were excluded in this study.

All patients were treated with radiation at a dose of 60 gy in 30 fractions over 6 weeks, at the KMC Hospital, Attavar, Mangalore. Informed consent was taken from the patients and the study was approved by the Institutional Ethical Committee. Cares for self but unable to carry out normal activity: shows some signs or symptoms of the disease.

1. Cares for self but unable to carry out normal activity: shows some signs or symptoms of the disease.

5 ml of heparinised blood was collected from patients and controls.It was kept in an upright position.The leukocytes were isolated and processed further as per the reported protocol [5]. The cells were suspended in Hank’s balan-ced salt solution (HBSS) and were used to study the phagocytic activity. Phagocytic function of macrophages was evaluated by following the uptake of candida albicans at 37° C for 20-25 mins followed by counting the number of ingested candida albicans associated with each cell in gram smear [6]. 200 macrophages were exam-ined and % phagocytosis was calculated; given by the number of phagocytes that have ingested 2 or more candida out of 200 examined. Phagocytic index is the average number of candida per phagocyte.

Statistical Analysis was done by student ‘T’ test and a P< 0.05 was considered to be significant. 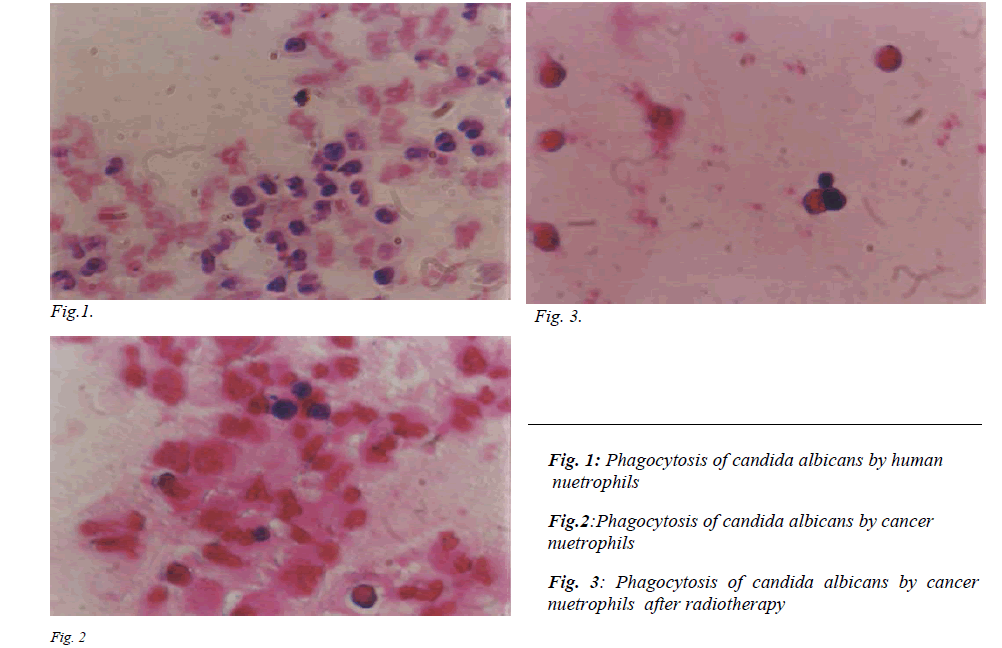 According to some of the earlier reports, macrophage burst is not utilized as an effector mechanism in the non antibody mediated macrophage tumor cytotoxicity reac-tions [7,8].It was then stated that phagocytic activity was normal in PMN whereas it decreased in tumor associated monocytes [9].On the contrary, although irradiation decr-eased, the addition of colorectal tumor cells increased reactive oxygen species release in granulocytes which was further enhanced by phorbol myristic acid [10] Certain studies revealed that oxidative burst is not nece-ssarily dependant on phagocytosis [11]. Therapeutical procedures seem to interfere with the course of defense reactions. Following surgery and chem.otherapy [12], as also following chemoradiotherapy [13], a significant fall in phagocytosis have been reported in the PMN of peri-pheral blood in breast cancer and saliva in oral cancer respectively. The present work also observes a similar trend in phagocytic process of macrophages of peripheral blood following radiotherapy in oral cancer. Aziz et al [4] have proposed that the cause for mucositis in radiation treated oral cancers is the decreased phagocytic activity of granulocytes in oral mucosal secretions. We propose that the systemic immunosupperssion observed in oral cancer patients is due to the decreesed functional activity of peripheral blood monocytes which is reflected by way of decreased phagocytic process.