Background: Peutz-Jeghers syndrome is a rare, autosomal dominant inherited disease caused by mutation of STK11/ LKB1 (serine threonine kinase 11) characterized by gastrointestinal hamartomatous polyps, mucocutaneous pigmentation and increased risk of malignant disease. The case of a 12-year-old girl with perioral pigmentation who present with recurrent vomiting and weight loss is reported. Endoscopic and radiologic investigation demonstrated a mass in the second portion of the duodenum. She underwent surgery because of a sharp abdominal pain caused by bowel intussusception. Laparotomy revealed two polyps: one in the second portion of the duodenum: Intussusception could be easily reduced and polyps are resected. Histologically, it was a hamartoma.

The child was found to be heterozygote for the mutation c.863-2A>C in intron 6 of the STK11 gene. The patient is followed and is well.

Conclusion: Peutz-Jeghers syndrome should be suspected in any child suffering from recurrent abdominal pain and /or other gastrointestinal symptoms in the presence of characteristic pigmentation.

Peutz-Jeghers syndrome is characterized by the association of two symptoms: gastrointestinal hamartomas mainly located in the small intestine and lentiginosis essentially on the lips and oral mucosa [1]. It is inherited as an autosomal dominant disorder. It is due to heterozygous mutations in the serine-threonine kinase STK11 tumor suppressor gene located on chromosome 19p13.3 [2]. The main risk that we should emphasize on is the amplified risk of cancer in many organs especially in the small bowel [1-3].

We described a 12-year-old girl presented with a two-month history of recurrent vomiting complicated by bowel intussusception. Two polyps were found to be the cause of an intussesception and be resected. Histology confirmed that it was a hamartomatous polyp.

A 12-year-old girl presented with two months history of an epigastric pain, recurrent vomiting and weight loss of 6 kg. Her parents were consanguineous and there was no family history.

On physical examination, she was dehydrated and pale. She weighed 30 kilograms (-1.5 DS) and she has a normal height (145 cm). Her BMI was lower than 3rd percentile. Abdominal examination revealed diffuse tenderness essentially in the right side of the abdomen. A hyperpigmented mucocutaneous macules size from 1 to 4 mm were observed on the lips, buccal mucosa and around the mouth and eyes (Figure 1).

Figure 1. A hyperpigmented mucocutaneous macules size from 1 to 4 mm were observed on the a) lips, b) buccal mucosa and c) around the mouth and eyes.

Abdominal ultrasonophy was normal. An upper gastrointestinal tract radiography done to identify the cause of vomiting showed an extrinsic compression on the second portion of duodenum (Figure 2). The patient underwent esophagogastroduodenoscopy that showed a mass of 2 × 2 cm in size at the second duodenum. 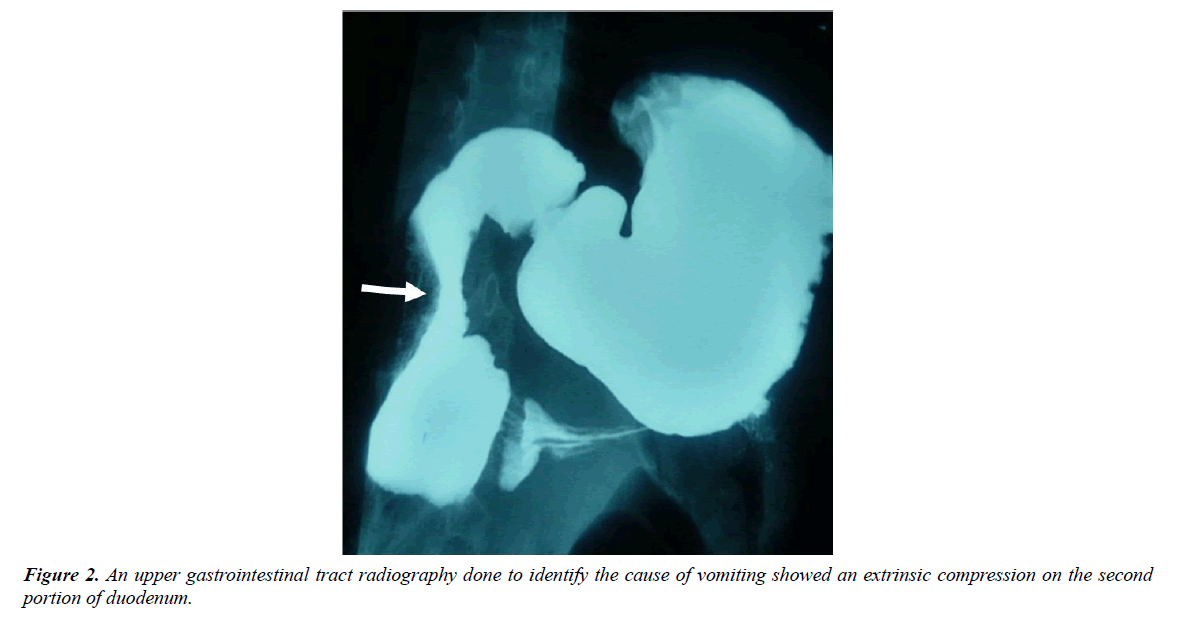 Figure 2. An upper gastrointestinal tract radiography done to identify the cause of vomiting showed an extrinsic compression on the second portion of duodenum.

The patient had during her hospitalization a sharp abdominal pain. Therefore a computed tomography was performed and confirmed the existence of an intraluminal tissue formation located at the second portion of duodenum with intussusception (Figure 3).

Figure 3. (a-c) Therefore a computed tomography was performed and confirmed the existence of an intraluminal tissue formation located at the second portion of duodenum with intussusception.

Histological examination of the polyps revealed branching bundles of smooth muscle fibers covered by hyperplasic duodenal mucosa defined as a hamartomatous polyps and confirmed the diagnosis of Peutz Jehgers syndrome. Genetic study identified a heterozygous mutation c.863-2A>C in intron 6 of the STK11 gene.

Abdominal complaint and vomiting were fading after surgery and the patient gained weight. After tow year of following up, she was currently asymptomatic. Her weight is 45 kg (-0.5 DS). The abdominal computed tomography scanning with oral contrast did not showed other polyps.

Peutz-Jeghers syndrome is a rare disorder. The estimated prevalence is approximately 1/200 000 births [2,3,4]. It is clinically characterized by gastrointestinal hamartomatous polyps, mucocutaneous pigmentation and the increased risk of developing cancer [1].

It is an autosomal dominant inherited disease caused by the mutation of the serine/threonine kinase gene (STK11/LKB1). This gene is located in the chromosome 19p13.3 and it has been suggested that it is a tumor suppressor gene [2]. The germline mutation was identified in 30% to 80% of PJS cases [2]. Our patient was found to be heterozygote for the mutation c.863-2A>C in intron 6 of the STK11 gene. To the best of our knowledge, it was the first description of this mutation.

Mucocutaneous hyperpigmentation is observed in more than 95% of PJS patients and it appears at an early age and tends to fade during puberty but buccal mucosa lesions persist. It’s a brown-black macula measuring 2-4 mm in size. It’s located in the perioral region and in the buccal mucosa, in various facial, body and oral surfaces [2,3].

Surgical treatment is frequently required for gastrointestinal involvement and. Laparotomy may be indicated for small intestinal intussusception, obstruction or polyp’s removal [2].

Patients with PJS have 15 times greater risk for cancer than general population. Malignancies include gastrointestinal tract carcinoma or cancers in other organs such as: pancreas, lung, breast, ovaries, uterus and testis [9,10].

That’s why, regular cancer screening is recommended. Upper and lower gastrointestinal endoscopy should be done every two years from 10 years of age or at the time of the first symptom. Screening for extra-intestinal cancers should began around the age of 20 years with pelvic and breasts examination once yearly, an annual abdominal and pelvic ultrasound and a mammogram every 2 to 3 years [9-11].

Physicians must suspect PJS in any child suffering from recurrent abdominal pain and /or other gastrointestinal symptoms in the presence of characteristic pigmentation. These patients should be regularly and closely monitored because of the risk of malignant disease in the gastrointestinal tract and extra intestinal organs. It is also important to screen family members.