Materials and Methods: We retrospectively analyzed a total of 109 patients (mean age: 78 ± 7.1 years, 53.6% male) who underwent single chamber permanent pacemaker implantation for indications such high-degree atrioventricular block and sick sinus syndrome. Hematological and biochemical parameters were measured prior to pacemaker implantation. Additionally troponin I and high-sensitivity C-reactive protein (hs-CRP) were sampled about 12 hours after pacemaker implantation.

Conclusion: Our results indicate that troponin I elevation after pacemaker implantation is associated with higher VPT values at the time of and the 30th day of implantation. For longevity of pacemaker batteries, low threshold values are preferable. To further extend the life of pacemakers, we recommend following patients more closely who has high troponin levels after permanent pace replacement.

Permanent cardiac pacing is the most efficient treatment for patients with symptomatic bradycardia and high-degree atrioventricular block. The pacing system is comprised of the pulse generator and the lead or leads that connect the pulse generator to the heart. Sensing, lead impedance, and pacing threshold are the basic pacing parameters and should be tested during PCM implantation. Pacing threshold is defined as the lowest voltage, which can produce 5 consecutive stimuli. Several factors such as electrolyte and metabolic abnormalities, antiarrhythmic drugs may increase pacing thresholds [1].

Cardiac troponins are routinely used for showing myocardial damage [2-4]. Originally, they were only intended for use in diagnosing acute coronary syndromes; however, there are many other clinical conditions that cause damage to cardiomyocytes and raising levels of troponin. An increase in troponin levels were showed after external cardioversion, intrenal shocks with ınternal cardiac defibrillators and radio frequency ablation [5-7]. The aim of this study was to examine the association between elevated serum troponin levels and ventricular pacing threshold (VPT) levels in patients who underwent single chamber PCM implantation.

We retrospectively analyzed a total of 109 patients who underwent permanent pacemaker implantation at our institution between January 2013 and December 2015 with the indications including high-degree atrioventricular block and sick sinus syndrome. Demographic/clinical data, echocardiographic data, and biochemical/haematological laboratory results were collected from digital/non-digital records.

Information including age, gender, diabetes mellitus, hypertension, hyperlipidemia, and smoking status were gathered. Hypertension was defined as blood pressure >140/90 mmHg on >2 occasions during office measurements or use of antihypertensive treatment. Diabetes mellitus was defined as fasting blood glucose >126 mg/dl or use of antidiabetics. Hyperlipidemia was considered to be present in patients with fasting total cholesterol ≥ 200 mg/dl or triglyceride ≥ 150 mg/dl.

The protocol was approved by the Central Ethical Committee and was conducted in accordance with. The Declaration of Helsinki. Written informed consent was obtained from each participant.

All procedures were performed under local anaesthesia in an electrophysiology laboratory by two experienced electrophysiologists. We implanted CapSureFix novus (Medtronic, Minneapolis, MN, USA) bipolar ventricular leads in all patients. All ventricular leads were steroid-eluting with an active fixation mechanism and were implanted into the right ventricular septum via a percutaneous subclavian vein puncture. At the time of implantation VPT values, lead impedance and R-wave amplitude were assessed. Pacing threshold was defined as the lowest voltage, which can produce 5 consecutive stimuli and was measured at pulse duration of 0.5 ms. After reaching a favourable measurement, the leads were implanted in the optimal position. All patients were reevaluated one month later after implantation.

Following a 12 hour fasting period, blood samples were collected before procedure. Additionally troponin I and highsensitivity C-reactive protein (hs-CRP) was determined by collecting a sample about 12 hours after pacemaker implantation. Cardiac troponin I (cTnI) was analyzed from lithium-heparinised plasma with AQT90 FLEX TnI immunoassay (Radiometer Medical ApS, Denmark).The limit of detection has been determined to be 0.0095 μg/L. The reportable range of the assay is 0.010-50 μg/L. The upper 99th percentile upper reference limit (URL) has been determined to be ≤ 0.023 μg/L. Hs-CRP concentration was determined by an immune turbidimetric test (Roche Diagnostics), Fasting blood glucose was analysed using the hexokinase method. Total and differential leukocyte counts were measured by an automated haematology analyzer (Abbott Cell-Dyn 3700; Abbott Laboratory, Abbott Park, Illinois, USA) and other blood parameters were measured using standard methods.

All echocardiographic examinations were performed by a certified cardiologist experienced in this field using a Vivid-7 (GE Vingmed, Horten, Norway) device. LVEF was calculated from apical 4-chamber views before pacemaker implantation, according to the modified Simpson’s rule. After implantation echocardiography was performed all patients for the presence of pericardial effusion.

Continuous variables were expressed as mean ± standard deviation or as median with interquartile range; Continuous data are presented as means ± SD. Differences in continuous variables between groups were determined by t test. A χ2 test or Fisher’s exact test was performed to compare the categorical variables. Correlation analysis was performed using Spearman’s test. Independent associations between VPT values and independent variables included in the multivariate regression model as covariates. Coefficients of standardized β regression along with their significance from the multivariate regression analysis were also reported. All statistical analyses were performed with SPSS software version 17.0 (SPSS Inc., Chicago, IL). A p value of 0.05 was considered statistically significant.

Table 1. Baseline demographic and clinical characteristics of the patients.

Laboratory measurements were also similar in both groups, except that hs-CRP elevation ratio (after implantation/before implantation) levels were higher in troponin positive group (3.17 ± 2.98 vs. 6.01 ± 5.39, p=0.01) (Table 2).

Table 3. Pacemaker parameters of the groups at the time of implantation and 30 days later.

Among the above-mentioned parameters, ventricular threshold values at the time of implantation and at day 30 of implantation were found to correlate with troponin elevation ratio (after implantation/before implantation) levels (r=0.392, p<0.001 vs. r=0.412, p<0.001, respectively) (Figures 1 and 2). 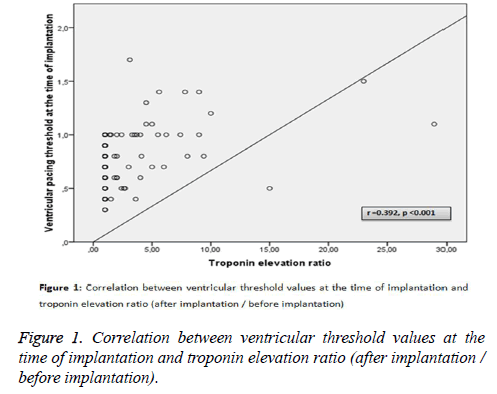 Figure 1: Correlation between ventricular threshold values at the time of implantation and troponin elevation ratio (after implantation / before implantation). 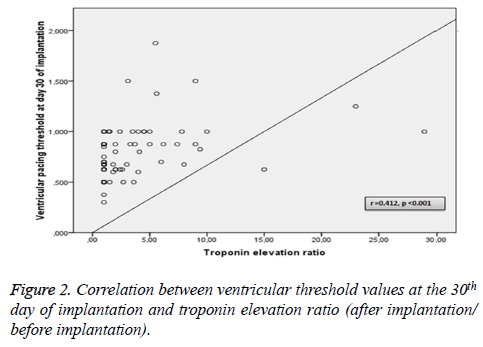 Figure 2: Correlation between ventricular threshold values at the 30th day of implantation and troponin elevation ratio (after implantation/ before implantation).

Several factors such as hyperkalemia, acid-base imbalance, hypothermia, hypothyroidism myocardial ischemia, hyper and hipoglycemia, acid-base imbalance, severe hypoxia, antiarrhythmic drugs may increase pacing thresholds [1,8]. Balli et al. revealed that VPT values at the time of and at the 30th day of implantation were increased in patients with high serum uric acid (UA) levels [9]. This is explained that high serum UA levels might affect the pacing threshold by causing subclinical endomyocardial changes such as inflammation and fibrosis. Spear et al. showed in an animal study that fibrosis in myocardial tissue causes increased threshold of myocardial excitability [10].

Troponin is currently defined as a quantitative marker that can accurately indicate the presence of injury and the extent of damage to myocardial cells [11-13]. However, there are many other clinical conditions that cause damage to cardiomyocytes and raising levels of troponin [5,7]. Yoshida et al. showed that greater elevation of the troponin level was associated with favourable outcomes after radiofrequency catheter ablation of atrial fibrillation [6]. High myocardial damage is associated with greater troponin elevation and stop atrial undesirable activity in atrium. In our study we detected that in patients with positive troponin values, an increasing level of tissue damage occurs during active fixation. And we consider that fibrosis occurring in this area leads to fall of the threshold values.

Leads contain steroid for suppress inflammation. Although there are no large randomized studies on this subject, several small studies have suggested that steroid elution improves the ventricular thresholds of passive-fixation electrodes [23-25]. There is no data for active fixation leads. It can be speculated that leads do not have enough steroid to suppress inflammation or some patients have steroid resistance. More comprehensive studies are needed to confirm this hypothesis.

There are several limitations of the present study. Sample size was small and enrolment was retrospective. Ventricular Rwave amplitude was noted at baseline but most of patients were pacemaker dependent and at 30th day of implantation Rwave amplitude cannot be noted. Many other clinical conditions that cause troponin elevation such as pulmonary embolism and pericarditis/myocarditis did not adequately excluded; however during hospitalization follow up there were not any clinical evidence of these disorders. Due to those limitations, more comprehensive studies are needed to confirm our findings.