Pediatric syphilis: A five-year experience in a single centre

Primary syphilis starts at the Treponema inoculation site after an incubation period of 10-90 days. It is characterised by a deep red macule growing into an ulcerative papule. A chancre is produced [1-6] affecting regional lymph nodes within the first week. Oral chancres are very frequent but are underestimated [7].

Secondary syphilis first symptoms appear within the 6 first postinfection weeks [7]. The secondary stage generally develops after 2-12 weeks [6]. About 80-95% of cases presents with mucocutaneous manifestations [7]. However, any organ or system can be affected since syphilis is a systemic disease [7]. Patients may show loss of appetite, fever, headache, stiff neck, lachrymation, myalgias and arthralgias [6].

Diagnosis can be generally made through identifying follicular urticarial and infiltrated papules or psoriasis and eczema-like plaques [1]. Nodules and pustules are infrequent [6]. Lesions are widely located but they mostly appear on palms and soles. Moist vegetant lesions called plane condylomas are also found on genitals and rubbing areas [1]. Oral mucosal plaques consist of painless round surface eroded lesions showing grayish scales covered with a whitish pseudo-membrane (opaline lesions) [8]. Moist mucocutaneous lesions are contagious since they contain treponemes. Generalized lymphadenopathies can also be seen [7]. Due to this varied presentation, syphilis is called The Great Pretender [1].

Alopecia can be the only sign of secondary syphilis and has been reported as patchy, diffuse or both in 3-7% of patients. It most often manifests as small irregular patches of non-scarring hair loss around the cranial vault mainly in the occipital and parietal regions. Eyebrows, bear and other hairy areas may also be involved [6,9].

In about 5% of the patients, there may be neurological (early neurosyphilis), ophthalmological (uveitis, retinitis and optic neuritis) and vestibular involvement.

Tertiary syphilis is the most destructive stage but is rare nowadays [7]. It presents with two types of lesions. Tubercles are solid elevated brown-copper lesions on the face, the trunk, the buttocks and limb extension areas. They develop in weeks or months and produce a leuco pigmented scar. Gummas are 2-10 cm hypodermic lesions involving the skin, mucosa membranes, bones and internal organs. They take approximately four months to undergo the infiltration, softening, ulceration and scarring stages. They are commonly found on the limbs, the head and the sternal area. Cardiovascular involvement is found in 25% of the patients with gummas [10] (Figures 1-6).

Figure 1: Congenital syphilis. Patient 1: A) Periorificial secretions. B) Erythematous, scaly and macerated lesions in the diaper area. C) and D) Skin flaps on palms and soles.

Figure 4: Acquired syphilis. Patient 9: A) Diffuse alopecia. B) Papules in the diaper area.

Figure 6: Acquired syphilis. Patient 4: A) Opaline lesions in the throat. B) Lesion on the gland penis covered by a whitish macerated pseudomembrane.

It is transmitted from the mother to the baby through the placenta. The more recent the disease is in pregnancy, the higher the transmission risks.

Symptoms can be apparent at birth or develop during the 6th-8th weeks of life. Dermatologically, several types of lesions can be seen. Some of them are specific of the congenital form, such as pemphigus on the palms and soles, onychosis, perionychosis and moist papules clustering round body orifices (mouth, nose, anus, vulva) and leading to very deep painful radiating fissures.

Treponema pallidum is a bacterium that cannot be cultured on artificial media. There are two diagnostic tests:

They are used to detect unspecific antibodies known as reagins produced as a response against lipoidal antigens that are probably released by the treponemes themselves due to cellular damage. These tests are called Venereal Disease Research Laboratory (VDRL) and Rapid Plasma Reagin (RPR) with carbon aggregates and macroscopic reading. The results can be false-positive and so may not be indicative of syphilis. Therefore, they should be confirmed with a treponemal test.

Penicillin is the drug of choice in every syphilis stage. Benzathine and crystalline forms are generally used. Treatment dosage and duration vary according to both the stage and the clinical presentation of the disease. Ophthalmic and neurological involvement is another important variable. Penicillin shows maximun efficacy and non-resistance. The number of benzathine penicillin doses has not been determined yet.

Penicillin is the only drug that has been demonstrated to be effective in treating syphilis during pregnancy. Standard doses should be administered. There is international agreement on desensitization when patients are allergic to penicillin [11]. Crystalline penicillin G IV (100000-300000 U/kg/d for 10 days) is recommend for treating congenital syphillis. When congenital syphilis is unduly diagnosed or retreated, aqueous penicillin G should be used (200000-300000 U/kg/d for 10-14 days) [1].

An observational retrospective descriptive study was performed from 1st January 2013 to 31st December 2017 at Sor María Ludovica children’s hospital by analysing clinical, hospitalization and referral reports of 50 patients with suspected syphilis, 36 of which had been confirmed with serological tests.

At the study hospital there is a neonatal intensive care unit without maternity care. The Dermatology Department receives an average of 6500 outpatients and 300 interdepartmental consultations every year. 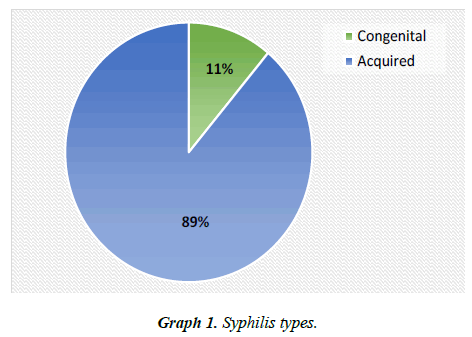 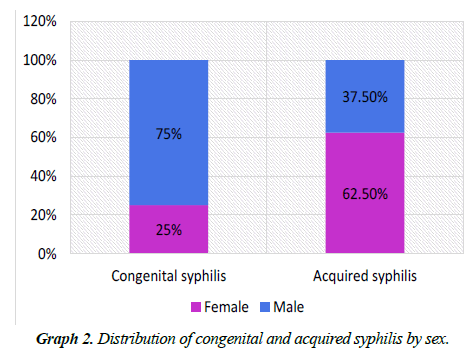 Graph 2: Distribution of congenital and acquired syphilis by sex. 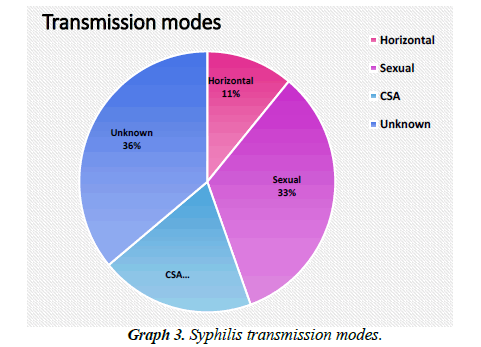 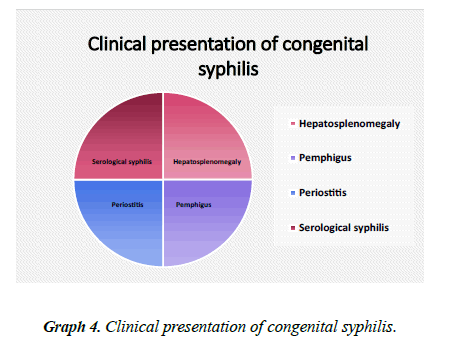 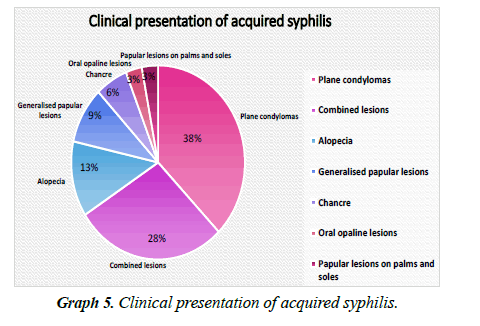 An annual increase of syphilis incidence was reported during 2013-2017. In the last two years, it has shown a two-fold increase correlating with the recent upsurge of sexually transmitted diseases worldwide.

Importantly, only 11.1% of the patients had congenital syphilis. This can be due to the kind of consultations made on outpatients and inpatients to the Department of Dermatology at the studied tertiary care hospital which offers neonatal but not maternity services. Moreover, neonatal serological screening is systematically performed in other hospitals with maternity care in the same city, which has contributed to diagnosing and treating congenital syphilis in their neonatology departments without referrals.

It was not possible to establish a relation between the reported higher incidence of acquired syphilis in girls and a particular condition, except for sexual abuse which was reported in 19.55% of the cases. The girls were all 25-109 months old, which can be associated with a more vulnerable population in terms of age and sex.

The percentage of patients with unknown syphilis transmission mode was high (36%). All these patients lived with at least one person who had a serological diagnosis of syphilis. These findings warn about the importance of identifying and working on unhealthy family habits facilitating bacterial transmission through fomites or non-sexual direct contact. Long-term followup is crucial for children with initially undiagnosed sexual abuse due to absent lesions, especially those who cannot express themselves or have uncooperative families.

The heterogeneous clinical presentation reported in this study reinforces the concept that syphilis is a disease with variable signs and symptoms. That is why, it is referred to as The Great Pretender by dermatologists.

Pediatric dermatologists play an important role in the early diagnosis of syphilis since they can unmask the disease through mucocutaneous lesions during outpatient hospital visits.