Pattern of use of epinephrine as anti-anaphylactic at a university hospital, Saudi Arabia

Epinephrine is life-saving treatment of anaphylaxis. This study was conducted to identify pattern of use of epinephrine in treatment of anaphylaxis in the Emergency Department at King Abdulaziz University (KAU) Hospital, Jeddah. A 40 staff (10 physicians and 30 nurses) was asked to fill a structured and validated questionnaire about their use of epinephrine as an anti-anaphylactic treatment. The results showed that the most commonly used doses of epinephrine were 0.3 mg drawn from ampoules followed by use of auto-injectors (EpiPens). A single dose was enough for most patients. Intramuscular injection was the most common route. Epinephrine was kept mostly in the emergency trolley away from light and humidity. Keeping epinephrine in a box attached to the walls but protected from light was a rare practice. The time needed for delivery of epinephrine to patients was mostly 30-60 s, and there was no significant difference between physicians and nurses. In conclusion, the pattern of use of epinephrine as an anti-anaphylactic treatment at the KAU hospital is generally similar to the international reports. To our knowledge, there is very few data published in Saudi Arabia handling this issue, thus this study improves knowledge of the medical staff about proper use of epinephrine in anaphylaxis and opens gate for larger studies.

Anaphylaxis is a serious and life-threatening condition that could affect any age group [1]. It could be triggered by food, drugs, insect bites, or unknown triggers [2]. The exact risk of death from anaphylaxis remains unclear, due to under diagnosis, lack of specific laboratory tests, and absence of visible pathological findings post-mortem [3]. Immediate treatment is mandatory to avoid brain hypoxia and death [4]. Epinephrine is life-saving treatment of anaphylaxis. The emergency health care givers should have good knowledge and enough training to minimize complications of both anaphylaxis and epinephrine [5]. Evaluation of drug use patterns with the international guidelines is essential to support rational drug use in different countries [6-8]. To our knowledge, there is very few data published in Saudi Arabia addressing use of epinephrine as an anti-anaphylactic, thus this study was conducted to collect data about pattern of use of epinephrine as anti-anaphylactic in the emergency department at King Abdulaziz University (KAU) Hospital, Jeddah. It aims to improve knowledge of the medical staff about proper use of epinephrine in anaphylaxis, to draw attention to necessity of standardization of this important practice, and to open gate for larger studies.

A multiple choice self-administered, structured, and validated questionnaire about pattern of use of epinephrine as antianaphylactic treatment was built up with some reference from previous studies [9,10]. The questionnaire included questions about doses needed, time of delivery, preparations used, and storage of epinephrine. The study was approved by the Research Ethics Committee, KAU.

A total of 40 staff of the emergency department (ED) at KAU Hospital was included (10 physicians and 30 nurses). They were reached personally and asked to fill the questionnaire. The contribution was totally voluntary and no names were requested. After completing the questionnaires, they were given back to authors in closed unmarked envelopes.

Data was analyzed using SPSS version 19.0 software. The Chisquare test was used to evaluate the differences in responses. P values were considered statistically significant if they were <0.05. 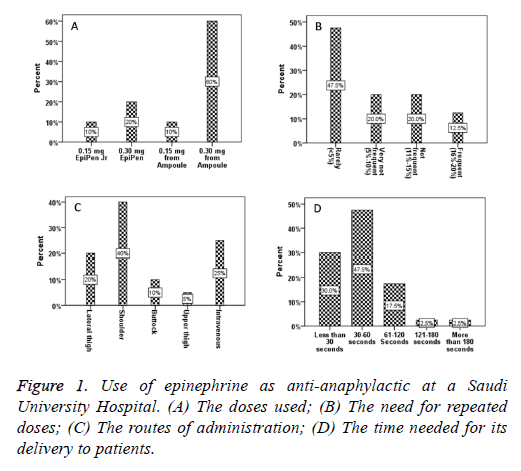 Figure 1: Use of epinephrine as anti-anaphylactic at a Saudi University Hospital. (A) The doses used; (B) The need for repeated doses; (C) The routes of administration; (D) The time needed for its delivery to patients. 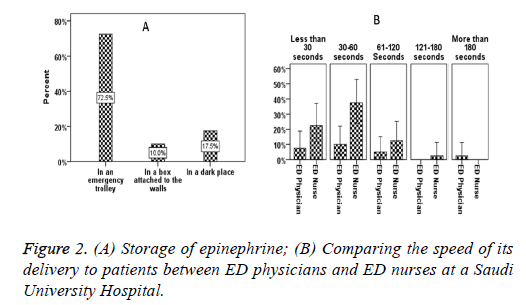 Figure 2: (A) Storage of epinephrine; (B) Comparing the speed of its delivery to patients between ED physicians and ED nurses at a Saudi University Hospital.

In management of anaphylaxis, there are few studies that clarify how to translate knowledge into proper practice [11]. In the current study, the most commonly used regimen was to give epinephrine (1/1000 solution) intramuscularly in doses starting from 0.01 mg/kg up to 0.5 mg in adults and 0.3 mg in infants. This dosage schedule is considered safe and effective first line therapy in anaphylaxis. It agrees with the international anaphylaxis guidelines of the American Academy of Allergy, Asthma & Immunology, the World Allergy Organization, and the International Consensus ON (ICON) food allergy from the International Collaboration in Asthma, Allergy and Immunology group [5,12-14]. Intramuscular injection of epinephrine is the most preferred route because it allows the highest plasma level very rapidly compared with other routes [15,16]. If the patient needed repeated doses of epinephrine or went to anaphylactic shock, the intravenous route can be used [17]. Outside hospital, epinephrine auto-injectors (EpiPen) are the mainstay of therapy for anaphylaxis [18]. But the EpiPens may not reach the muscle tissue in the vastus lateralis muscle particularly in fatty women due to inadequate needle lengths [19]. In these cases of anaphylaxis, the epinephrine auto-injectors are not an ideal choice and epinephrine ampoules must be used [20]. The delay in treatment of a real emergency such as anaphylaxis could be fatal [21]. In the current study, comparing the speed of delivery of epinephrine between physicians and nurses aimed to detect how rapid each category administers an accurate dose of epinephrine in cases of anaphylaxis where the time factor is immensely critical. No significant differences were detected between ED physicians and ED nurses. This coincides with a previous study in Canada that reported non-significant differences in speed of delivery of epinephrine between physicians, general duty nurses, and emergency department nurses where the ranges were 30-83, 26-71, and 27-33 seconds respectively [22]. In the current study, epinephrine ampoules were stored in the emergency trolley away from light and humidity and the needed dose is drawn immediately before use. Preparing epinephrine in a box and attaching it to the wall of the ER in advance to be ready on demand was a rare practice. This agrees with recommendations of previous studies which reported that drawing epinephrine in a syringe and taping it to a wall in the ER is not preferred to avoid light exposure [23].

In conclusion, the pattern of use of epinephrine as antianaphylactic treatment at King Abdulaziz University Hospital, Western Saudi Arabia is generally similar to the international reports regarding the doses, route of injection, time needed for delivery of epinephrine to patients, and storage of epinephrine. This study, although small, but it is expected to improve knowledge of the medical staff about proper use of epinephrine in anaphylaxis and to open the gate for larger studies.