1Department of Biostatistics, College of Medicine, the Catholic University of Korea, Seoul, Republic of Korea

3Department of Periodontics, College of Medicine, the Catholic University of Korea, Seoul, Republic of Korea

In detail, parental education has been reported to be closely related to child health [9,10]. Adolescents with lower parent education have shown an increased cardiovascular risk [11]. Additionally, lower parent education appears to be related to increased insulin resistance both cross-sectionally and over time in Black and White adolescents [12]. Socioeconomic status and adiposity in childhood were evaluated, with parental education as the socioeconomic status indicator, and inverse associations with adiposity were found [13]. Furthermore, a significant and graded association has been found between parental socioeconomic position and cognitive function both prior to and after adjustment for respondents’ education [14]. A lower level of education for a child’s mother and father has been shown to be the most important socioeconomic factor associated with the concentration of lead in children’s blood [15]. Additionally, the relation between socioeconomic status and inflammation during adolescence was assessed, and adolescents with less-educated parents tended to have higher inflammation, evaluated by the levels of C-reactive protein, interleukin-6, and tumor necrosis factor α soluble receptor-2 fibrinogen [11,16].

In a previous report, lower socioeconomic groups were significantly more likely to present with periodontitis [17]. However, there is limited information regarding the association between the combined socioeconomic position according to parental education and participants’ own education and periodontitis in the Korean population. Thus, this study was performed to assess this relationship in a large probability sample of the Korean population using data from the Korea National Health and Nutrition Examination Survey.

Overview of the survey

This study is a secondary data analysis of data collected during the Korean National Health and Nutrition Examination Survey (KNHANES) conducted during 2008-2010. KNHANES is a cross-sectional survey based on stratified, multistage probability samples of Korean households, representing the civilian, noninstitutionalized population. It includes a health interview, a survey of health behaviors, and a nutritional and health examination following a standardized protocol.

Initially, a total of 29,235 individuals participated in the KNHANES survey. The number of surveys was reduced to 21,811 by excluding participants younger than 19. The analysis in this study was confined to a total of 14,316 responses that had no missing values for the reproductive factors and outcome variables (Figure 1). All participants signed informed consent forms. This study was approved by the Institutional Review Board of the Korean Center for Disease Control and Prevention and conducted according to the Helsinki Declaration-based Ethical Principles for Medical Research Involving Human Subjects. The Institutional Review Board at the Catholic University of Korea approved this study. 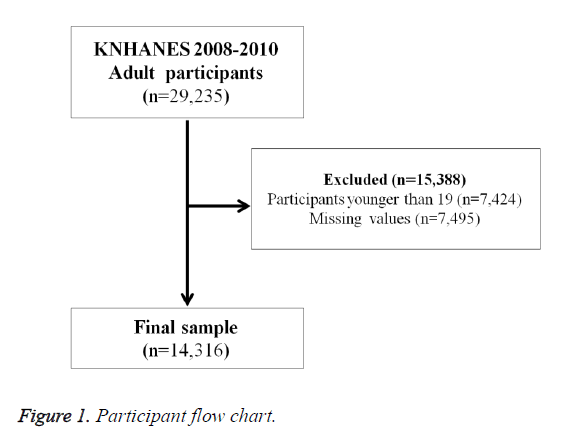 Smoking status was categorized into three groups in accordance with participants’ responses: (1) nonsmokers-individuals who had never smoked or had smoked<100 cigarettes in their life; (2) ex-smokers-participants who had smoked in the past but had stopped smoking; and (3) current smokers-those who were smoking currently and had smoked ≥ 100 cigarettes [19].

The Community Periodontal Index (CPI) was used to assess periodontal treatment needs and defined periodontal disease as CPI of 3 and 4 [21]. Having had a dental checkup within a year, self-reported oral status, chewing ability, speech, frequency of tooth brushing per day, and use of secondary oral products were evaluated. Secondary oral products included dental floss, mouthwash, interdental brushes, and electric toothbrushes [19].

Metabolic syndrome was defined according to previous reports [22]. According to these criteria, three or more of the following must be fulfilled: waist circumference ≥ 90 cm in men and ≥ 80 cm in women; fasting triglycerides ≥ 150 mg/dL or use of lipid-lowering medication; high-density lipoprotein cholesterol<40 mg/dL in men and <50 mg/dL in women or use of lipid-lowering medication; blood pressure ≥ 130/85 mm Hg or use of antihypertensive medication; and fasting blood glucose ≥ 100 mg/dL or current use of antidiabetic medication [23]. Diabetes was diagnosed if fasting blood sugar was >126 mg/dL or the individual was currently using antidiabetic medications [24]. Hypertension was defined as a systolic blood pressure of >160 mm Hg, a diastolic blood pressure of >90 mm Hg, or the current use of systemic antihypertensive drugs [25].

All data are presented as mean ± standard error or as % (standard error). Logarithmic transformation was performed to achieve normal distribution when necessary. Student’s t-test or a chi-square test was used to investigate differences in the presence of periodontitis according to the variables. Multiple logistic regression analyses were used to assess the associations between periodontitis and socioeconomic position. Model 1 was unadjusted, whereas Model 2 was adjusted for age, sex, body mass index, smoking, drinking, and exercise. Model 3 was adjusted for the variables in Model 2 plus metabolic syndrome, frequency of tooth brushing per day, use of secondary oral products, and having had a dental check-up within a year. The survey procedure of a statistical software package (SAS version 9.2 for Windows, SAS Institute, Cary, NC, USA) was used for statistical analyses to account for the complex sampling design. Two-sided P values of <0.05 were considered statistically significant.

Table 1. Characteristics of the study population.

Table 2. Characteristics of the individuals categorized by age and presence of periodontitis.

Table 3. Relationship between socioeconomic position and systemic diseases and dental checkup within a year.

This study assessed the association between the combined socioeconomic position using parental education and participants’ own education and periodontal status in a large probability sample of the Korean population. Parental education combined with individuals’ own education was associated with the prevalence of periodontitis after adjustment for age, sex, body mass index, smoking, drinking, exercise, metabolic syndrome, frequency of tooth brushing per day, use of secondary oral products, and having had a dental checkup within a year.

The associations between socioeconomic position and oral diseases have been previously evaluated. For example, it was observed that socioeconomic factors are considered a strong risk indicator of schoolchildren’s caries experience [26]. Specifically, mothers’ schooling is negatively associated (odd ratios=0.95) with caries in primary dentition [27]. Furthermore, respondents who had low income and low education are more likely to have fewer teeth compared with their referent groups [28].

This study assessed the relationship between socioeconomic position and periodontitis. A previous study evaluated the socioeconomic factors associated with the prevalence of periodontitis in Koreans, and it was observed that participants with higher income were less likely to have periodontitis [17].

It was also shown that early-life socioeconomic disadvantages were significantly associated with periodontitis in adulthood [29]. Previous study demonstrated the existence of significant social gradients in periodontal diseases already among adolescents [30].

The effects of one’s socioeconomic position, especially parental education, may be partially explained by the following. Parents with a lower level of education may not be aware of good oral hygiene practices. To demonstrate, a previous study assessed the social characteristics, demographic determinants, and oral hygiene practices among children, and a significant association was found among parents’ educational status and oral hygiene practices [31]. Furthermore, people with less education may lack oral health knowledge, and this may lead to fewer visits to dental clinics. In this vein, a previous report evaluated the determinants regarding access to dental care facilities, and it demonstrated that increased childhood dental attendance was associated with a high level of the mother’s education [32]. Similarly, the prevalence of periodontal outcomes was investigated and differed significantly depending on paternal and maternal education [33].

The effects of one’s socioeconomic position, especially parental education, may also be explained by the following. The socioeconomic status gradient in systemic diseases reflects behavioral as well as physiological pathways, and systemic inflammation seems to be involved [34]. Low socioeconomic status has been associated with an increased exposure to adverse life circumstances, which can trigger biological responses and result in an increased risk for systemic diseases [34]. Similarly, social disadvantage, specifically low parent education, has been associated with increased inflammation in adolescence [11].

Parental education should also be considered regarding maternal and paternal sides. In a previous study, oral hygiene status was evaluated in relation to the sociodemographic factors of children and adults who were hearing impaired and attending a special school; a multiple regression analysis showed that the education of the mother was the single best predictor for oral hygiene status and explained 92% of the variance [35]. Likewise, the odd ratios for parental education regarding tooth loss was evaluated, and an odd ratios of 1.8 regarding tooth loss for a father who achieved only primary school education and an odd ratios of 2.0 for a mother with primary school education only were shown [36]. Furthermore, a low socioeconomic position is more consistently associated with a worse profile for women [37]. Additionally, longitudinal studies drawn from high-income countries have demonstrated long-term associations of early childhood socioeconomic deprivation with increased adiposity in adulthood, particularly in women [7]. Moreover, maternal education has been reported to have a strong impact on infant and child mortality [38]; maternal education is closely related to child health, measured either by nutritional status or by infant and child mortality, but the effect of father’s education on infant and child mortality appears to be about one half that of the mother’s education [9]. However, one report emphasized the paternal education [30]. The occurrence of all periodontal outcomes investigated followed social gradients, and paternal education was reported to be one of the most influential variables.

It should be considered that Korea has experienced substantial social changes during the past century, and the education level was relatively low for older generations, especially for women [6]. It was shown that the paternal education level was less than elementary school for 34.9% of the men in the older cohort, compared with 7.9% of men in the younger cohort [4].

Several limitations should be mentioned for this study. First, due to the design of this study as a cross-sectional study, a causal relationship between socioeconomic position, including participants’ own and their parental education, and periodontitis could not be determined [18]. Additionally, maternal education was not precisely analysed due to the substantial social changes during the past century, which restricted the education of women for several decades [4]. Still, despite its limitations, this study had several strengths. This study was based on highly reliable data from a large, nationally representative population using sample weights and adjustments for the complex sample design of the survey [21]. The study also assessed parental education to analyse the socioeconomic status, and subgroup analysis for sex differences was performed.

This research was supported by Basic Science Research Program through the National Research Foundation of Korea (NRF) funded by the Ministry of Science, Information and Communication Technology and Future Planning (NRF-2017R1A1A1A05001307).