The medical workflow application used in our experiments is Epigenomics which is used at USC Epigenome center for analyzing the genome sequencing of the human body. It contains sequence of automated operations to collect short DNA segments using high-throughput gene sequencing machines and it uses MAQ software and IlluminiaSolexa genetic analyzer [2,3]. The relationship between the tasks of the Epigenomic workflow application is modelled using eight levels, with each level containing tasks that perform certain functions. The major functions in this application are splitting the data into small size chunks, reformatting chunks to a reference genome and merge the reformatted sequences into a single output map. Finally, it contains tasks that compute the sequence density for each location of interest in the reference genome [2]. Figure 1 shows the structure and tasks of the Epigenomics workflow application. This application is a data intensive workflow application and contains both large and small size tasks. 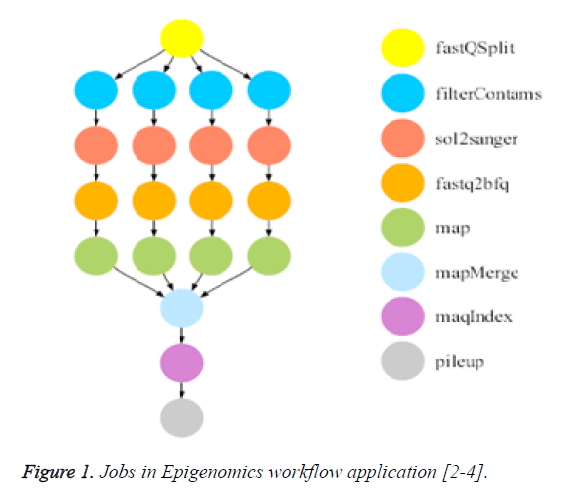 The influence of billing granularity on Epigenomic medical workflow application is shown in Table 1. The results show the comparison of cost and overhead values. The experiment was carried out using default Data center and VM configuration of WorkflowSim. Epigenomics workflow with different number of tasks were executed with only billing per minute resources, only Billing per Hour resources and both Billing per Hour and Billing per Minute. It can be seen from the results that there is more overhead cost associated with Billing per Minute and execution cost is more for Billing per Hour model. It also can be noticed from the results that when both kind of resources are available there is an improvement in the cost and also one more advantage is partial usage of resource is greatly reduced. Here tasks with runtime less than 5 minutes are considered as small tasks otherwise the tasks are considered as big tasks.

In this paper, new methods are proposed to solve the medical workflow scheduling optimization problem by using discrete Particle Swarm Optimization and rescheduling the obtained solution to exploit the advantages of billing granularity of the resources. The structure of the paper is as follows:

• The experimental results of the proposed algorithm.

Medical Workflow scheduling problem in cloud platform represents NP-hard optimization problem [7]. Zhou et al. propose Dyna a framework to minimize the monetary cost of executing workflow applications in cloud platform which guarantees probabilistic deadline [8]. The Dyna framework includes algorithms for dynamic configuration of resources and also authors propose hybrid configuration of instances to utilize the spot instances. Nirmala and Bhanul used a variation of traditional PSO called Catfish-PSO to schedule scientific workflow applications with the objective of reducing the makespan and execution cost [9]. The authors of Catfish-PSO based workflow do not address the billing model and billing granularity of the resources when mapping task to resources. Pietri and Sakellariou [10] propose two algorithms CSFS-Max and CSFS-Min with iterative approach to choose the resources with proper frequency. Authors have carried out performance analysis of their algorithms with three types of billing models namely Linear, Sublinear and Superliner. Bo et al. [11] propose a technique for automatically deploying and configuring the resources to schedule medical workflow application using Galaxy tool. Authors also improve the reliability of large-set data transfer in Galaxy by integrating with the features of Globus tool kit.

Huang et al. [12] propose calculation of tunable fitness function based on user’s priority for low makespan and low cost. This heuristic is extended further by using bottleneck reduction algorithm to identify and execute the task with the largest number of descendents. Wu et al. [13] propose revised discrete PSO which uses set based operations for particles position and velocity updation. Authors considers both transmission and computation cost to meet the QoS constraints for efficient scheduling of workflow applications. They consider schedule as a pair of (task, service) which learn its position from other candidate pairs which greatly reduces search space. They also analyse the performance of their method with traditional PSO and BRS (Best Resolution Scheduling).

In this section first a brief overview of the IaaS cloud platform is presented. Then, a solution for the medical workflow scheduling for minimizing makespan and cost in a cloud platform using discrete PSO which considers all the billing schemes and billing models of the public cloud provider is proposed.

The objective of proposed work is to reduce the monetary cost and makespan for executing medical workflow applications in cloud environment. The monetary cost of executing medical workflow application in cloud platform represents the cumulative execution cost of all the tasks in the workflow [14,15]. Computation time or execution time of task T on virtual machine M is calculated as follows.

Communication cost of the task T is equal to data transfer time of task between parent and its children tasks. It is calculated as follows

In the above equation n represents the number of parents and children of task T. From the above two equations total execution time of the task is calculated using equation 3.

Traditional Particle Swarm Optimization [16] is a bio-inspired meta-heuristics which works on the principle of how the birds search for the food. Here, the candidate solutions for any problem are represented as particle and collection of particles is called swarm. The particles fly through a search space with some velocity values similar to how the birds fly in search of food and then it changes it position. The main advantage of PSO is that particles learn by self and there are no operators required for creating next generation. Each particle is associated with two values namely local best and global best. Local best represents particles best value and global value represents best value among all the particles.

The challenge involved in scheduling medical workflow application in cloud is analyzing tradeoff of executing workflow task on a virtual machine and need to check large search space that is generated because of large number of resources with different resource type, billing model and billing granularity. Medical Workflow application represents class of workflow scheduling problems in cloud platform that represents NP-complete problems. The above scheduling problem represents a discrete space because either the task is scheduled on virtual machine or not scheduled. So the outcome is either 1 or 0. Hence to solve these optimization problems continuous optimization techniques such as PSO requires the conversion mechanisms because its positions are real-valued. In the proposed method, Discrete Particle Swarm Optimization which is a variant of PSO and can perform optimization in discrete domain is adopted.

First thing in swarm based optimization technique is initialization of particles and in the given problem each particle will be matrix of size m x n with binary values. Where m represents tasks and n represents virtual machines. The values are initialized randomly. Figure 2 shows the sample workflow application and initial position for particle. Velocity of each particle is also represented using matrix with values in the range -vmax to vmax. Initial pbesti for ith particle is represented by m X n matrix. In DPSO new position of the particles and the velocity values are calculated in using the following equations [17] 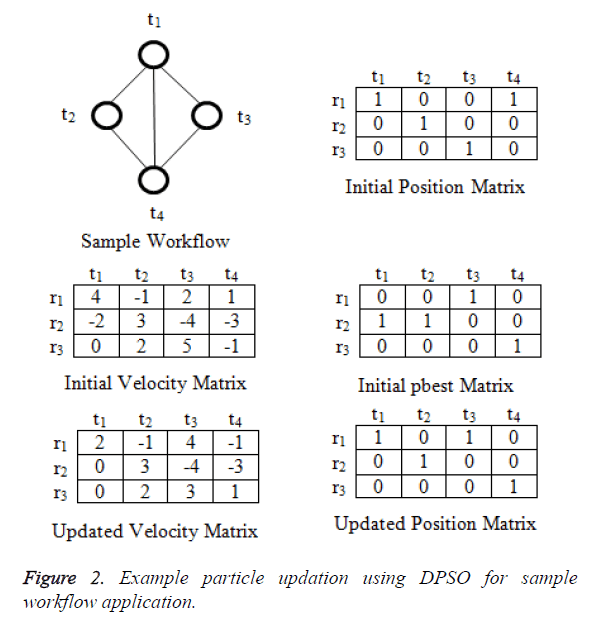 Outline of the proposed workflow scheduling is given as:

Step 2: Calculation of gbest and pbest for the initial swarm

Step 3: Calculation of fitness values of each particle using equations (5) and (6)

Step 4: Calculate Position and Velocity of each particle using equation (8) and (9)

Step 6: Repeat Steps 4 to 6 till the maximum iteration is reached.

Rescheduling of tasks based on billing granularity of resources

In the proposed system after obtaining the near optimal schedule from DPSO, it is sent to the rescheduler to further improve the cost and VM overhead. For each task and VM assignment obtained, we compare the task length and the billing granularity of the VM and if the task is a small task then it is assigned to the VM with the minute granularity, otherwise the task is assigned to VM with hour granularity.

1 For each pair of (task t,vm r) belonging to Schedule S

3 for each virtual machine vmi in VM set

6 task t is a 'large' and r.billing_granularity=='minute' then

7 for each resources vmi in the VM set

8 find the resources vmi with biling_granularity=='hour'

Repeat above steps for all the (task,resource) pairs of schedule S

In this experiment the proposed systems was executed for different iterations for different sizes of Epigenomics workflow application and for each iteration average make span and cost was calculated. And the results were compared with the traditional PSO. Figure 3 shows the average makespan comparison ,it can be seen from the result that proposed system gives better performance compared to the traditional PSO for all the iterations. Figure 4 shows the average cost of execution for different sizes of Epigenomics workflow applications using proposed method and traditional PSO. It can be seen from the graph that the average execution cost for large size workflow applications such as Epigenomic_997 increases substantially from the proposed system. 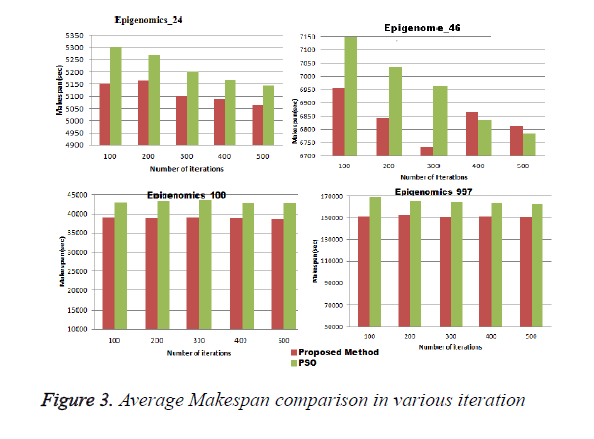 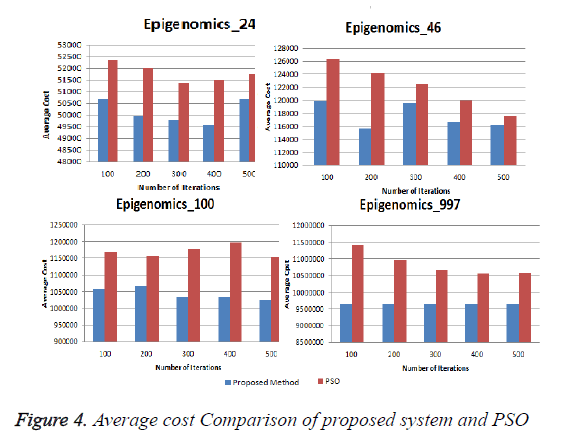