Giardiasis is an infection caused by Giardia intestinalis into the small intestine that affects children in school age. The aim of the work was evaluated the specific IgA anti-Giardia antibodies in serum of children from rural communities were evaluated 100 children of 3 to 13 years old and measurement the levels of IgA antibody response against immunodominant antigens of Giardia intestinalis by ELISA and Westernblot. The soluble extract of Giardia intestinalis and fractions were obtained by differential centrifugation. Electrophoretic pattern showed several proteins from 205 to 14kDa, and sera of infected children recognized proteins of 205, 176, a region from 76 to 41kDa, and a band of 23kDa in the fraction 2. The IgA antibody response anti-Giardia for to soluble extract was higher in infected children compared to uninfected children (0.29 ± 0.16 vs. 0.07 ± 0.04; p ≤ 0.05). The IgA antibody response against the fraction 2 was higher in infected group than controls (1.0 ± 0.2 vs. 0.75 ± 0.26; p ≥ 0.05), the fraction 3 showed similar response to the soluble extract (0.45 ± 0.12 vs. 0.3 ± 0.12; p ≥ 0.05). The infection by Giardia intestinalis produce specific IgA antibodies directed to the proteins of the fraction 2. These proteins could be tested as antigens for serological diagnosis of giardiasis.

Giardia intestinalis is a chronic and debilitating tropical infection that often leads to clinical manifestations, is caused by intestinal parasite Giardia intestinalis [1]. In the absence of any preventive vaccine and effective chemotherapy to eliminate the parasites 200 million people suffer from at least one form of the disease [2]. The existence of acquired immunity in human giardiasis has been reported [3]. Antibody and T cell responses in human giardiasis have been analyzed with a view to understanding their relevance to the development of protective immunity [4]. The role played by Giardia-specific antibodies in preventing the persistence of infection or the development of chronic disease manifestations is still not understood. In addition, early work in this area focused on antibody responses in infected individuals compared with subjects with no infection or subjects from areas of endemicity who have been exposed to parasites but do not display any patent infection, and findings suggested qualitative and quantitative differences in the production of specific antibody responses [5-7]. Individuals with active giardiasis display higher levels of specific IgG but lower levels of IgM than do subjects free of established infection, and raised levels of Giardia specific IgG and IgA have been correlated with the presence or absence of parasites [8,9]. These and other investigators have quantified the levels of IgG, IgM, and IgE responses to different antigens [10-12], but curiously, there have been fewer reports in the literature on the levels of IgA antibody responses in human giardiasis [13]. Investigations have indicated the protective role of the specific IgA antibodies [14,15]. In this work, we describe the results about specific IgA antibodies in children infected by G. intestinalis. Therefore, the measurement of specific IgA antibodies in human giardiasis is essential for the endemic control and seroprevalence studies in rural communities.

Were evaluated 100 sera from children of both sex between 3 and 13 years of age, with and without giardiasis demonstrated by coproparasitological test. For each child were taken 5 ml of venous blood for serum, with prior informed consent signed by parents or legal representant. The study was approved by the Bioethics Committee of the Institute of Immunology of the Central University of Venezuela.

A fecal specimen was collected per individual for the detection of eggs, larvae and/or giardiasis by direct examination with saline, lugol, and other techniques, such as Kato, Baermann, Formol-Triton-Ether and agar [16]. The individuals were examined clinically for the presentation of acute or/and chronic disease manifestations of Giardiasis by means of a proforma.

Culture of the parasite and soluble extract preparation

The trophozoites of Giardia intestinalis from an international reference strain WB (ATCC, 30957) was cultured in vitro in TYI-S-33 medium for 48 to 72 h at 37°C [17]. The parasites were washed in phosphate buffered saline (PBS) three times and lysed in 1 ml of PBS in 0.2% Triton X-100. The whole extract was centrifuged at 1.680 x g for 5 min at 4°C, recovering the supernatant as soluble extract.

The soluble extract and fractions were analyzed by electrophoresis at 10% polyacrylamide gels [19]. The proteins were separated at 120 volts at room temperature. The gels were stained with silver and/or transferred to nitrocellulose membranes according to Towbin (1979) [20].

The proteins of soluble extract and fractions were transferred to nitrocellulose membranes and were blocked with PBS-1% skim milk for 1 hr at room temperature. Subsequently, membranes were washed once with 0.05% PBS-Tween-20 for 10 min and incubated with sera from infected children with G. intestinalis or uninfected, diluted 1:50 with 0.05% PBS-Tween 20 overnight at 4ºC. The membranes were washed three times with PBST-ween- 20 0.05% for 10 min and incubated with peroxidase-coupled anti-human IgA (chain-α) secondary antibody (SIGMA ALDRICH) diluted at 1:750 in PBS-Tween 20 0.05% for 1 hr at room temperature. After washing, the membranes were revealed with 3,3',5,5'-Tetramethylbenzidine (TMB, Vector). Finally, photographed and digitized for analysis.

Evaluation of the levels of IgA antibodies against soluble extract and fractions of G. intestinalis by ELISA

Soluble extract, fraction 2 and fraction 3 of G. intestinalis were coupled in 96-well plates at a concentration of 10 μg/well in PBS pH 7.2 for 1 h at 37°C and overnight at 4°C. Plates were washed once with PBS-T20 and blocked in PBS-T20 with 2% skim milk for 1 h at 37°C. One-hundred μl/well of the individual sera of infected or uninfected children, diluted 1:50 in 0.1% PBS-T20 and 1% skim milk were incubated for 1 h at 37°C and then at 4°C overnight. The plates were washed three times with 0.1% PBS-T20 and incubated with 100 μl/well of peroxidase coupled anti-human IgA (α-chain, SIGMA ALDRICH) diluted at 1:1000 in PBS-T20 at 0.1% for 1 h at 37°C. Finally, the plates were washed and revealed with TMB 100 μL/well. The reaction was stopped after 30 min with 50 μl of 2N H2SO4 and the plate was read at 450 nm in ELISA reader (SUNRISE). The cut-off point was determined from the mean of optical densities (OD) of 20 uninfected individuals plus or minus 2 times the standard deviation.

The data was analyzed by calculating the arithmetic mean and the standard deviation. The comparison of the means of the optical densities between the groups was evaluated by Student's t test, the value of p ≤ 0.05 with statistical significance. The Med Calc Statistical Software Program was used 9.3.0.0. 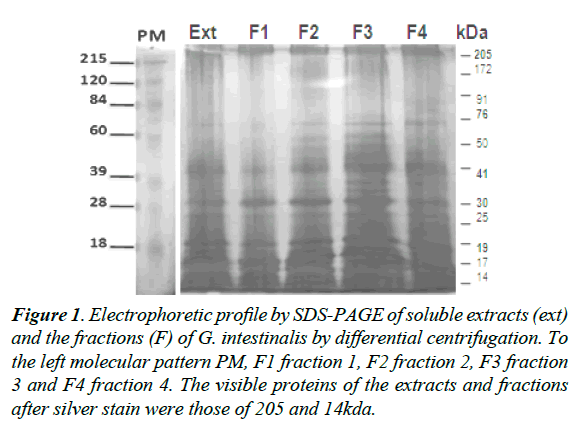 Figure 1. Electrophoretic profile by SDS-PAGE of soluble extracts (ext) and the fractions (F) of G. intestinalis by differential centrifugation. To the left molecular pattern PM, F1 fraction 1, F2 fraction 2, F3 fraction 3 and F4 fraction 4. The visible proteins of the extracts and fractions after silver stain were those of 205 and 14kda. 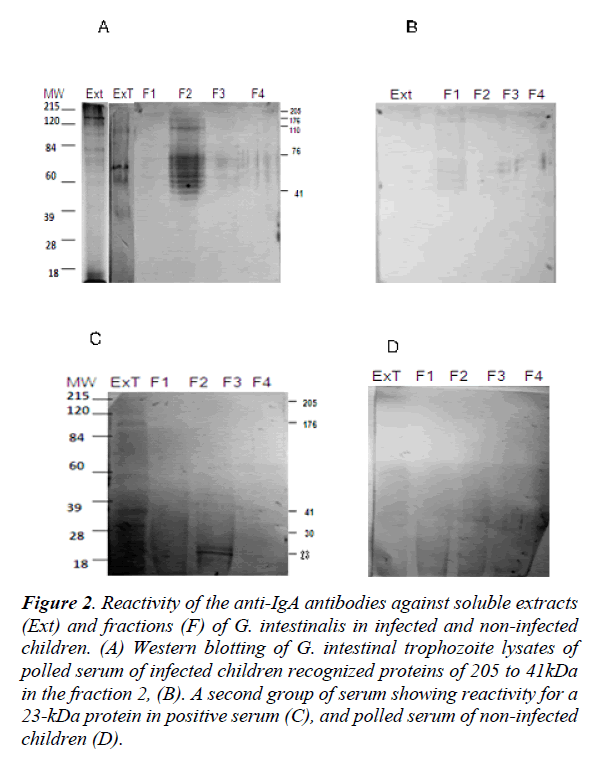 Levels of IgA anti-Giardia against the soluble extract of G. intestinalis by ELISA

The Figure 3 shows the mean of the optical density values (O.D.) in the group of infected individuals by G. intestinalis and not infected for specific IgA antibody response against soluble extract by ELISA. The higher level of antibodies was observed in the infected children compared to uninfected children (0.29 ± 0.16 vs. 0.07±0.04, p ≤ 0.05). The cut-off was 0.14 ± 0.04 according to the mean value in uninfected individuals (Figure 3). 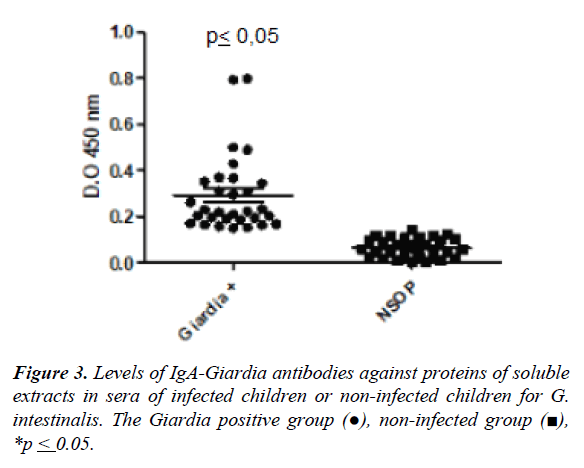 Levels of IgA anti-Giardia against the fractions of G. intestinalis by ELISA 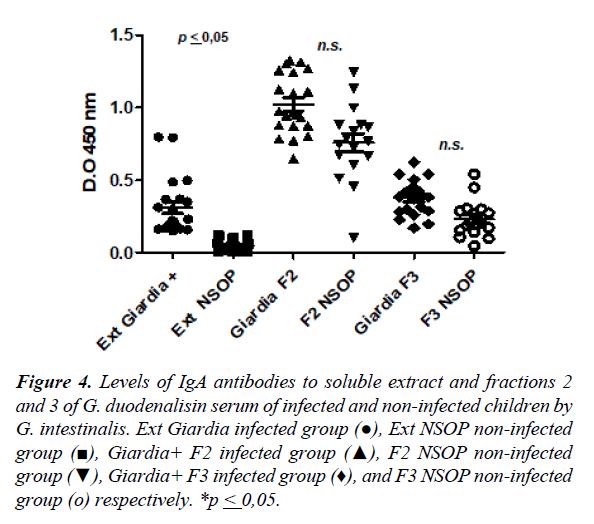 Giardiasis is an important problem of public health in worldwide with high morbidity caused by this parasite [21]. It is estimated in more than 30% of cases of diarrhea are caused by intestinal parasites, where the infection by Giardia intestinalis is the most reported [22]. The immunoglobulin A is the key antibody for intestinal infection control and parasite clearance [23]. Therefore, the identification of antigens related with the specific IgA antibody response is essential for diagnosis and possible vaccine [24]. The electrophoretic analysis of soluble extract and fractions of trophozoites of Giardia intestinalis showed proteins with molecular weights between 205 and 14kDa. The most prominent proteins were of 205, 190, 176, 76, 41, 30 and 23kDa. Previously, Soliman et al. identified at least eleven proteins with molecular weights of 170 to 31kDa respectively [10]. Also, Guimarães et al. determined by electrophoretic profile a fraction of Brazilian isolates, reporting the presence of 16 bands with molecular weights between 122 and 10kDa [11]. More recently, our group identified in the soluble extract bands between 137 and 14kDa reacting with the specific IgA anti- Giardia in the serum of infected children [13]. In the present work, were detected new proteins for specific IgA antibody response against G. intestinalis antigens in the fractions with reactivity for proteins of 205, 176, 110kDa, a region between 76 to 41kDa and the band of 23kDa which were mainly recognized in the fraction 2. The protein of 41kDa could belong to α or β-tubulin, proteins present in the cytoskeleton and the flagella on the parasite M [25]. Other proteins have also been identified by proteomics studies similar to those detected in the present work such as the proteins of 65 to 80kDa [26,27]. Therefore, the identification of these antigens is essential for evaluate the seroprevalence in endemic areas and serological diagnosis. The levels of IgA antibody against soluble extract were significantly higher in children infected with G. intestinalis compared to those not infected, confirming that the infection induce production of specific IgA anti-Giardia. Additionally, the sex distribution and age as risk factors were associated with the seroprevalence for IgA anti-Giardia. Therefore, the fractions were used as source of antigens for evaluate the specific response for anti-Giardia IgA by ELISA. Higher value of O.D. values in the fraction 2 than soluble extracts in serum of infected children was observed. This result indicates that the use of fractions improve the reactivity in the immunogenic antigens for measurement of specific IgA as an indicator of active infection than the study of IgG response, since giardiasis is a non-inflammatory infection and the immunoglobulin A is the predominant antibody in the gastrointestinal tract. Therefore, the evaluation of proteins presents in the fraction 2 as candidate for the design of sensitive immunological test to complement the coproparasitological diagnosis of one of the most frequent parasites in Venezuelan children will be our next step.

To the rural communities of Miranda State. Work was funded by the Project Science Mission 2007001425 and the Ministry of Science, Technology and Innovation Locti 2007, U.C.V.