Coronary artery disease (CAD) is a common heart disease in Chinese adults with high mortality rate. Compared to the Han patients, the disease degree is often severer in the Uygur patients with coronary artery disease. In this study, using metabonomic analysis, we found that there was elevated level of saturated fatty acid in the serum from the Uygur patients. Human umbilical vein endothelial cells cultured with 400 μmol/l palmitic acid for 48 hours led to a 69.4% cell apoptosis. The expression level and activity of caspase3 were increased after palmitic acid treatment. In addition, palmitic acid promoted the secretion of TNF-α, as well as elevated intracellular reactive oxygen species accumulation. Western blot analysis revealed that p-p38 level was raised during this process. Blocking p38 signal by inhibitor significantly attenuated the pro-apoptosis effects of palmitic acid, indicating a pivotal role of p38 pathway in this progression. These results provide some evidences for understanding the differences of disease degree between the Uygur and Han CAD patients.

Coronary Artery Disease (CAD), a world-wide, high risk heart disease, is the leading cause of death in Chinese adults with cardiac disease. Atherosclerosis is considered to be the primary pathological changes in CAD, which also acts as a causing factor on the other hand. Vascular endothelial cells (VEC) play important roles in the pathogenesis of coronary artery disease. The intact structures and functions of ECs are indispensable for preventing the occurrence of atherosclerosis [1], and the impairment of EC functions might be the initial step of the disease [2]. The pathogenic factors of CAD, such as old age, hyperglycemia and hyperlipidemia, could reduce the number of circulating ECs and attenuate their adhesion, migration and regeneration abilities [3]. In fact, the disorder of VEC functions in CAD has been emphasized for a long time. Meanwhile, it also provides a therapeutic target for coronary artery disease [4].

Abnormal lipid metabolism is a predominant factor in the pathogenesis of atherosclerosis. Palmitic acid (PA) is a member of the free fatty acids (FFA) family, whose disorder is observed in insulin-resistant states including diabetes, obesity, and dyslipidemias. High concentration FFA impedes the adhesion and proliferation of endothelial cells, which might contribute to the pathogenesis of atherosclerosis [5,6]. Moreover, treatment with palmitic acid induces the apoptosis of many cell types, including cardiomyocytes [7,8], suggesting a potential role of PA in coronary artery disease.

Metabonomic analysis, a powerful tool for revealing the relationship between metabolites and biological phenomena, has been widely used in pharmaceutical research and development. Variations of metabolites are able to reflect the subtle changes of body inner environment. Magnetic Resonance (MR) is the most frequently utilized analysis method in metabonomics. Using metabonomic analysis based on HMR, Brindle et al. established a fast, non-invasive diagnosis method for cardiac coronary disease [9]. In this study, we used NMR to analyze the difference of metabolites in the serum from the Han and Uygur CAD patients, revealing an increased palmitic acid level in the Uygur individuals. It might be correlated with higher pathologic degree in the Uygur patients. Moreover, treatment of endothelial cells with palmitic acid promoted apoptosis through activating MAPK pathway. These results are instrumental in exploring the mechanism of high susceptibility for coronary artery disease in the Uygur population.

NMR analysis of metabolites in serum

Blood was collected from 13 Uygur and 11 Han CAD patients in the Urumqi General Hospital of PLA. The serum was prepared by centrifugation and subjected to NMR analysis, as described previously [9]. Briefly, H-NMR spectra of the samples was measured with the pulse sequence: -RD-90°-G1-180°-G1-90°-T-90°-G1-180°-G1-90°-π-90°-ACQ. The acquired data were processed using PLS-DA to analyze the differences between the Uygur and Han patients.

Firstly, HUVECs were cultured in M199 medium supplemented with 2% FBS for 12 hours, then these cells were treated with palmitic acid for an indicated time period. Treated cells were stained with Annexin V-FITC and subjected to FACS to measure the apoptosis cell ratio. The proteins were detected by Western blot. The caspase 3 activities were quantified using Caspase 3 Activity Assay Kit, following the instructions of manufacturer.

The supernatants of HUVECs were collected and subjected to ELISA analysis using TNF-α and IL6 Elisa Kits, following the manufacturer instructions.

All data was analyzed using Graphpad Prism software. The significance of difference was measured by student’ t test. p<0.05 was considered to be significant. 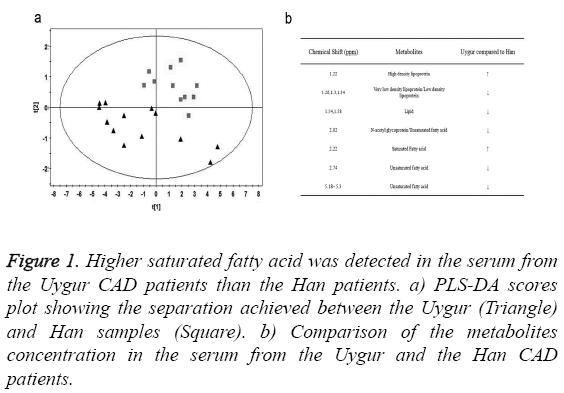 We use palmitic acid, a main type of saturated fatty acid, to explore the roles of SFA in the pathogenesis of CAD. Treatment with palmitic acid induced the apoptosis of HUVECs in a dose and time related manner (Figures 2a and 2b). In the tested conditions, treatment with 400 umol/l palmitic acid for 48 hours led to the highest apoptosis ratio. It should be noted that low concentration (100 umol/l) or short treatment time (12 hours) exhibited little effect on apoptosis induction. In addition, treatment with PA increased the expression level of Caspase 3 (Figure 2c). An increment of Caspase 3 activity was also detected in the PA treated HUVECs (Figure 2d). It suggested that PA induced the apoptosis of HUVECs through activating caspase pathway. 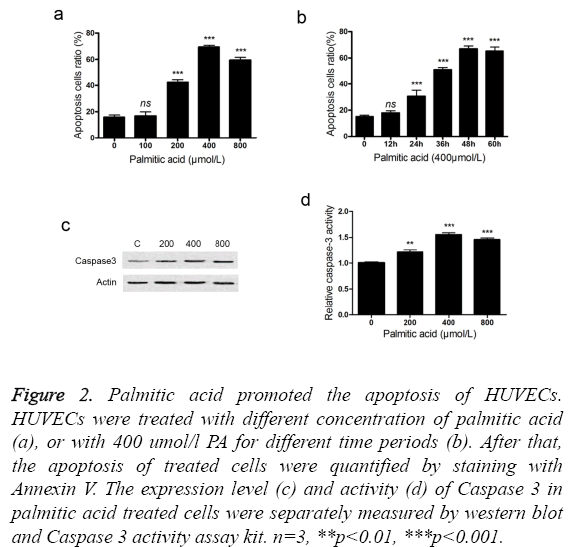 Figure 2: Palmitic acid promoted the apoptosis of HUVECs. HUVECs were treated with different concentration of palmitic acid (a), or with 400 umol/l PA for different time periods (b). After that, the apoptosis of treated cells were quantified by staining with Annexin V. The expression level (c) and activity (d) of Caspase 3 in palmitic acid treated cells were separately measured by western blot and Caspase 3 activity assay kit. n=3, **p<0.01, ***p<0.001.

Palmitic acid enhanced the secretion of TNF-α in HUVECs

TNF-α and IL6 are two important inflammatory cytokines in atheroselerosis [10,11]. Therefore, we evaluated the effects of PA on the secretion of TNF-α and IL6. High concentration of PA (>200 umol/l) promoted the secretion of TNF-α in HUVECs (Figure 3a). However, the expression of IL6 was not affected after addition of PA (Figure 3b). TNF-α, not IL6, is likely to be an effector cytokine of palmitic acid. 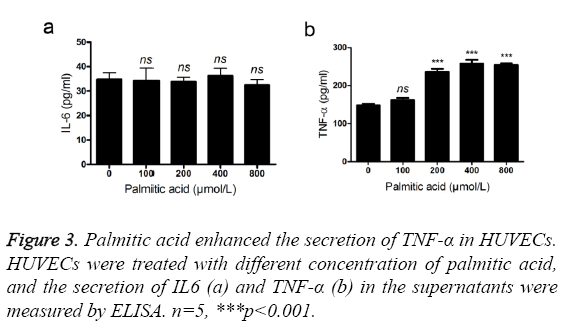 Reactive oxygen species could impair endothelial cell functions [12], thus we investigate the effects of palmitic acid on ROS production. Intracellular staining revealed that addition of palmitic greatly enhanced the accumulation of reactive oxygen species (Figure 4a). There were 2.4 fold ROS in PA treated cells than control cells (Figure 4b), which was cytotoxic to host cells. 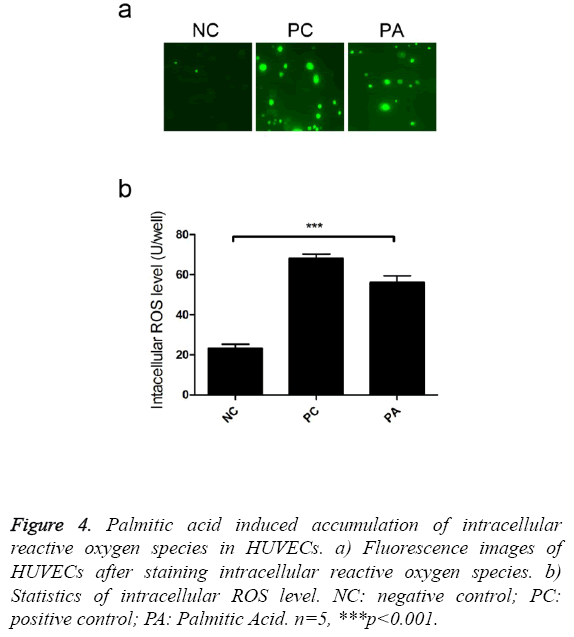 To find out the signal pathways mediating the cytotoxic activity of palmitic acid, we measured the changes of p38, ERK and JNK protein after treatment with palmitic acid. The level of p38, ERK, p-ERK, JNK and p-JNK was not altered by the addition palmitic acid (Figure 5a). However, treatment with PA increased the p-p38 protein level in HUVECs (Figure 5a). Next, three inhibitors, including p38 inhibitor SB203580, ERK inhibitor PD98059 and JNK inhibitor SP600125 were separately added to cultured cells and the effects were measured. Coincided with western blot results, only p38 inhibitor SB203580 attenuated cell apoptosis caused by palmitic acid (Figure 5b). Furthermore, addition of SB203580 impeded PA induced elevation of caspase3 protein level and activity (Figures 6a and 6b). As well, the secretion of TNF-α was also inhibited by SB203580 (Figure 6c). These results indicated that the functions of palmitic acid on endothelial cells were mediated by p38 MAPK pathway. 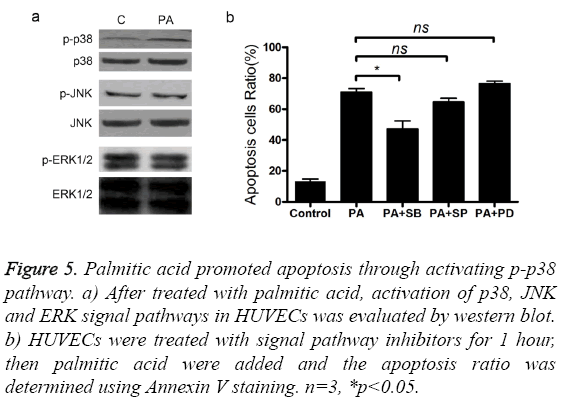 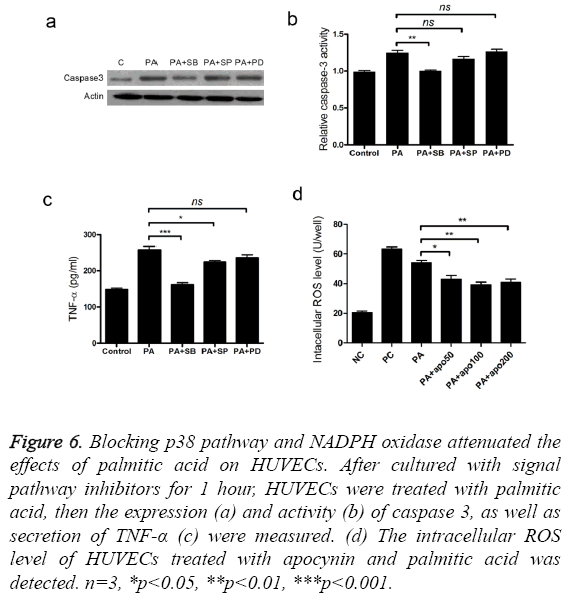 Figure 6: Blocking p38 pathway and NADPH oxidase attenuated the effects of palmitic acid on HUVECs. After cultured with signal pathway inhibitors for 1 hour, HUVECs were treated with palmitic acid, then the expression (a) and activity (b) of caspase 3, as well as secretion of TNF-α (c) were measured. (d) The intracellular ROS level of HUVECs treated with apocynin and palmitic acid was detected. n=3, *p<0.05, **p<0.01, ***p<0.001.

Metabonomic analysis provides a useful tool to monitor the physiological status of individuals. The products of cellular metabolism directly enter into the body fluid, making it possible to reveal pathological state via measuring metabolites in blood and urine. Using metabonomic analysis, Yang et al. accurately classified diabetic patients from healthy persons, providing a new method for diabetic diagnosis [13]. It has been demonstrated that the metabolic changes of fatty acid was long before the emergence of type II diabetic symptom [14]. Palmitic acid, linolenic acid and hydroxybutyric acid in plasma are found to be closely related with the occurrence of diabetic [15]. Using this method, Rosiglitazone was demonstrated to alter the metabolism of polyunsaturated fatty acid [16]. In our study, we found some differences of metabolites in serum between the Han and Uygur CAD patients, using metabonomic analysis. Saturated fatty acid and high density lipoprotein are significantly increased in the Uygur patients, as well as decreased unsaturated fatty acid, low density lipoprotein and lipid. As metabolites in the bodies could be influenced by many factors, such as races [17], ages [18], gender [19], environment [20], diet [21], it can be envisaged that the different lifestyles between the Han and Uygur peoples in Xinjiang province lead to the metabolites variations, ultimately making the Uygur CAD patients with more severe disease degrees.

The impairment of vascular endothelial cells is of key importance in the pathogenesis of atherosclerosis. The endothelial cells derived from bone marrow gradually exhausted with age, making old people more susceptible to atherosclerotic diseases [5]. In a study, injecting bone marrow cells to mice with high fat diet successfully ameliorated atherosclerotic syndrome [6]. On the other hand, as an important factor in type II diabetes [22], free fatty acid is also proved to be closely associated with atherosclerosis [23,24]. Treatment with high glucose impaired the adhesion and proliferation of endothelial cells, as well as promoted their senescence. However, the influences of fatty acid metabolism dysfunction in diabetes have not been well described. In our study, we found that palmitic acid, a predominant subtype of free fatty acid, promoted the apoptosis of ECs. It implied that the elevated saturate fatty acid in the serum of the Uygur patients promoted the disease progression through injuring vascular endothelial cells. Notably, palmitic acid stimulated HUVECs to secret TNF-α, a pro-inflammatory cytokine. Atherosclerosis is considered to be an inflammatory disease [10], thus it represents another pathway of free fatty acid to promote disease. Treatment of ECs with TNF-α led to an increased expression of VCAM-1 and ICAM-1, as well as a higher apoptosis ratio [25]. Like TNF-α, IL6 is a frequently observed, pro-inflammatory factor in the process of artery endothelium injury. But in our results, palmitic acid did not enhance the expression of IL6, indicating other potential factors promoting inflammation in this disease. We found that intracellular ROS was increased after addition of palmitic acid, which could directly promote the senescence of host cells. Indeed, ROS is able to impair endothelial progenitor cell function [26]. Taken together, it can be imaged that palmitic acid induces endothelial cell apoptosis via increasing the expression of TNF-α and the accumulation of intracellular ROS.

MAPK pathway is an important signal cascade in inflammatory responses, which plays a pivotal role in the apoptosis of endothelial cells. Activation of p38 and JNK pathways is able to upregulate the secretion of TNF-α and intracellular ROS level, promoting endothelial cell senescence [27,28]. Through impeding different pathways by inhibitors, we revealed that palmitic acid executed the roles via p38 MAPK pathway. Increment of p-p38 is dispensable for palmitic acid induced cell apoptosis and TNF-α secretion, because blocking it with inhibitor SB203580 abolishes these effects. Of note, some other signal pathways contribute to the outcome of PA treatment as well. Guo et al. demonstrated that PA promoting apoptosis through suppressing AKT/eNOS pathway [29]. Nevertheless, our research provides new insight into the pathogenesis of atherosclerosis in the Uygur population.