Local anaesthetics are clinically used for the production of anaesthesia, relieving pain associated with post operation and biopsy study [1]. Literature suggested that these drugs are posses’ cytotoxic property, on the basis of which it produces neurotoxicity when applied for spinal anaesthesia clinically [2,3]. It was observed in the reported study that administration of local anaesthetic through cauda equina, intrathecal rout induces apoptosis in neuronal cells by inducing atrophy, degeneration of axon, oedema [4]. Local anaesthetics having higher lipophilicty carry neurotoxic property and evidences links the neurotoxicity associated with bupivacaine administration [5]. There are various mechanisms on the basis of which local anaesthetics induces cytotoxicity/neurotoxicity like apoptosis induced through activation of Caspase pathway, increase in ROS production, mitochondria injury, tyrosin kinase enzyme inhibition, blockage of Na+ ion channel, increase in release of calcium from rough endoplasmic reticulum and activation of p38 Mitogen-Activated Protein Kinases (MAPK) etc. [6-8]. Even hyerexcitability of the neuron is one of the factors responsible for neurotoxicity induced by local anaesthesic [9].

P2X4 receptor is related to neuropathic pain and induces injury by up regulation of MAPK and thereby activates the release of brain derived neurotropic factor in neuronal cells [10]. Thus P2X4 receptor activation produces hyper excitability of neuron and neuronal injury [11]. Previous studies reported that P2X4 receptor antagonists reduces the ROS production and cytokine level, thus decreases the oxidative stress [12]. It also inhibits the apoptosis of neuronal cell by activating the Caspase pathway and decreasing the activation of MAPK [13]. P2X4 receptor antagonists have also maintained the neurochemical level in the brain tissues and thereby used in the management of epilepsy [14]. Anticonvulsant drugs reported to have neuroprotective in local anaesthesic induced neurotoxicity [15]. On the basis of these facts it is worthy to assess the neuroprotective effect of P2X4 receptor antagonists in local anaesthesics induced neurotoxicity.

MTT assay was used to asses’ cellular viability. In which cell (5 × 103 cells/well) were placed at 96 well plates and treated with bupivacaine for the period of the duration of 3 days. MTT assay was performed as described by Xiao et al. MTT (50 μl) was added to the well plate and keep it for incubation for 4 hr. at 37˚C. Thereafter from the reaction mixture supernatant was washed out and subsequently dimethylsulfoxide (200 μl) was added to all the well plate at room temperature. The absorbance was estimated at 570 nm wavelength [16].

Neuronal cells were placed (5 × 103 cells/well) in 96-well plates. Cell plates were treated with suramin 25, 50 and 100 μmol/l for the duration of 6 hr, thereafter media was treated with 1 mmol/l bupivacaine for the duration of 1 day. CCK8 was poured in to each well plate for the period of 3 hr and optical density of the plate was read at a wavelength of 450 nm by spectrophotometric analysis [17].

Apoptosis of cell was assessed by apoptosis assay in which SH-SY5Y cell lines (1 × 106 cell/well) placed for 1 day in 6 well plates. Cell plates were treated with suramin 25, 50 and 100 μmol/l and bupivacaine for the period of the duration of 2 days. Apoptosis of cells were estimated as per the instruction given by manufacturer (BD biosciences) by using apoptosis detection kit. In all the well plate Annexin V-FITC of 5 μl was added and kept it for 10 min at 37˚C for incubation and thereafter Propidium Iodide (PI) at a volume of 5 μl was added to it. Flow cytometer was used for the estimation of cell apoptosis [18].

SH-SY5Y cell lines (1 × 106 cell/well) were placed for 1 day in 6 well plates and separated into four different treatment groups such as control, bupivacaine (1 mmol/l) treated group, suramin (100 μmol/l) and suramin (100 μmol/l) for 6 hr subsequently bupivacaine (1 mmol/l) for 1 day. ROS accumulation was estimated by DCFH DA fluorescent dye. Cells of all the groups were incubated with DCFH DA for the duration of 20 min at 37˚C and then cells were washed with PBS for 3 times. After washing all the cells were resuspended with PBS and flow cytometer used for the estimation of ROS accumulation [17].

SH-SY5Y cell lines (1 × 106 cell/well) were placed for 1 day in 6 well plates and separated into four different treatment groups such as control, bupivacaine (1 mmol/l) treated group, suramin (100 μmol/l) and suramin (100 μmol/l) for 6 hr subsequently bupivacaine (1mmol/l) for 1 day. Activity of Caspase 3 and 9 was estimated by as per the instructions of Caspase 3 and 9 kit (Tiangen Biotech). All the cells were incubated for 30 min by keeping it with cell lysis buffer. BCA protein reagent was used for the estimation of concentration of protein. Estimation of Caspase 3 and 9 was achieved using micro plate spectrophotometer (Bio Rad Lab., CA, USA) at a wavelength of 405 nm [16].

Neuronal cells were treated in the same way as described in ROS measurement and after washing with PBS and fixed by using 2.5% glutaraldehyde for the duration of 1 hr at 4C and lead uranium was used for the staining of it.

Transmission electron microscope was used for the observation of ultrastructure of cell [17].

All the values of these experiments were articulated as mean ± SD and the data was statistically analysed by one-way ANOVA and thereafter applied to Dunnett post hoc test. p<0.05 was considered significant statistically.

MTT assay was used for the estimation of toxic effect of bupivacaine on SH-SY5Y neuronal cell line as shown in Figure 1. It was observed that bupivacaine at dosage 1, 1.5 and 2 mmol/l significantly decreases the viable cell compared to control (0 μmol/l). 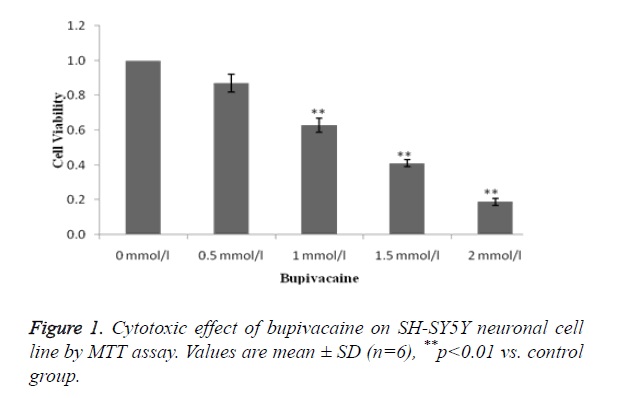 LD50 of bupivacaine was found to be 1 mmol/l same as that of previous study and therefore it was at this dose used for the induction of cell death. 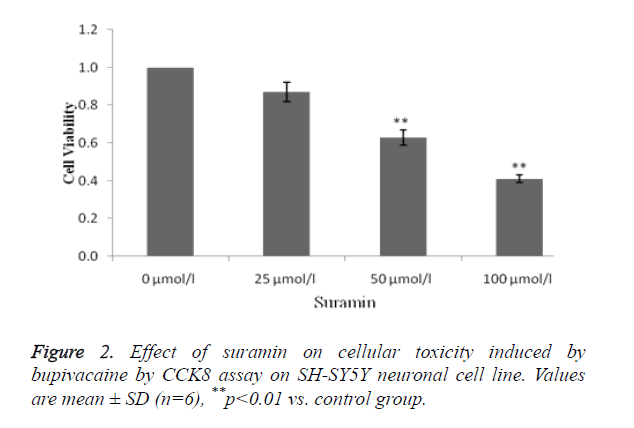 It was observed that suramin shows the cytoprotective activity in a concentration dependent manner. 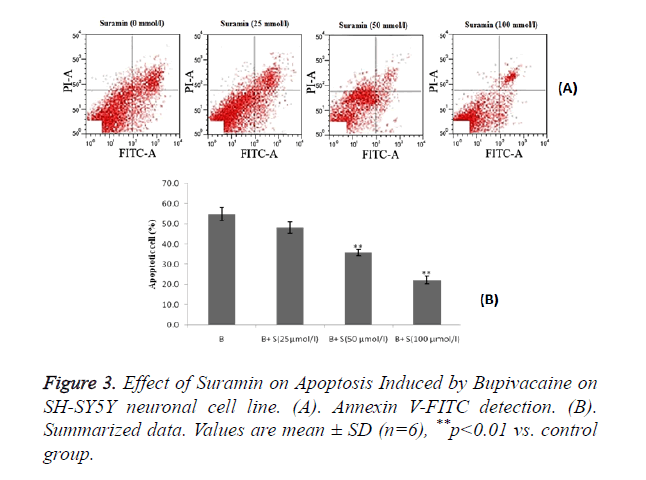 Statistical representation also suggested that treatment with sumarin significantly (p<0.01) decreases the percentage of apoptosis cell induced by bupivacaine compared to control group and these are in a dose dependent manner as shown in Figure 3B.

Figure 4 shows the effect of sumarin in ROS production in SH-SY5Y neuronal cells by flow cytometer. It was observed that treatment with sumarin significantly decreases the accumulation of ROS which was increased by bupivacaine treatment. Accumulation of ROS was estimated by DCFH DA fluorescent signals as shown in Figure 4A. 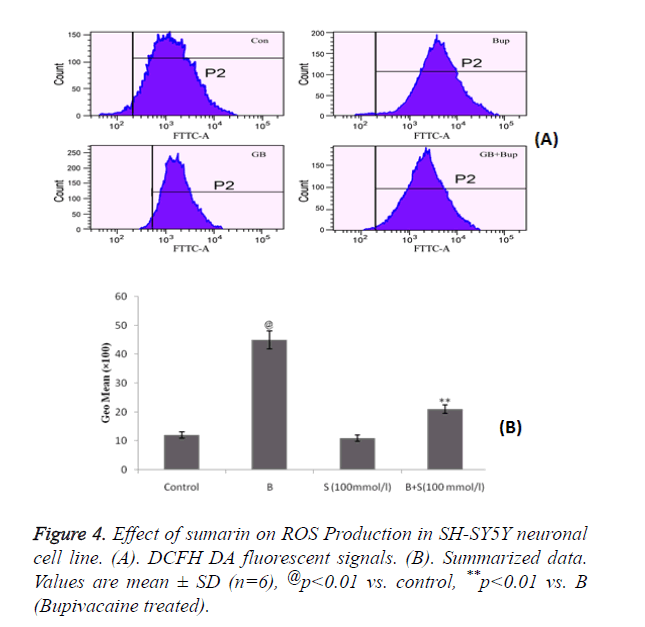 These results demonstrated that sumarin protects the mitochondrial function by reducing the ROS production and increasing the antioxidant capacity.

Treatment with bupivacaine significantly (p<0.01) increases the activity of Caspase 3 and 9 protein compared to control group. Whereas, treatment with sumarin significantly decreases the activity of Caspase 3 and 9 in SH-SY5Y neuronal cell line compared to bupivacaine alone treated group as shown in Figure 5. 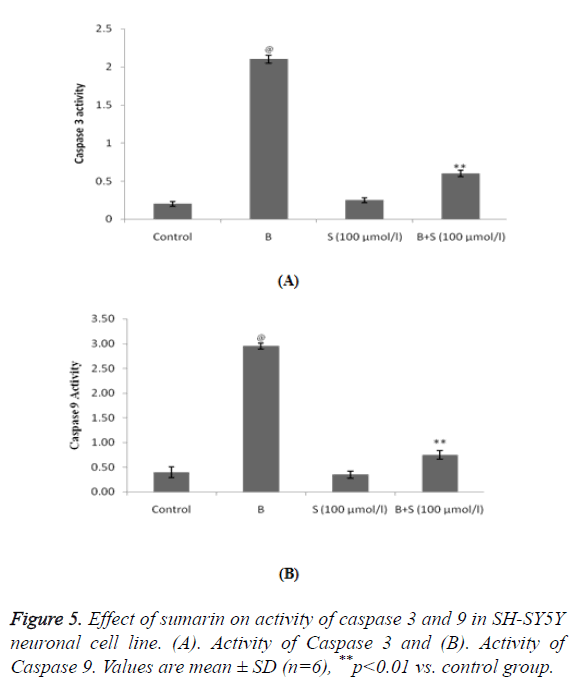 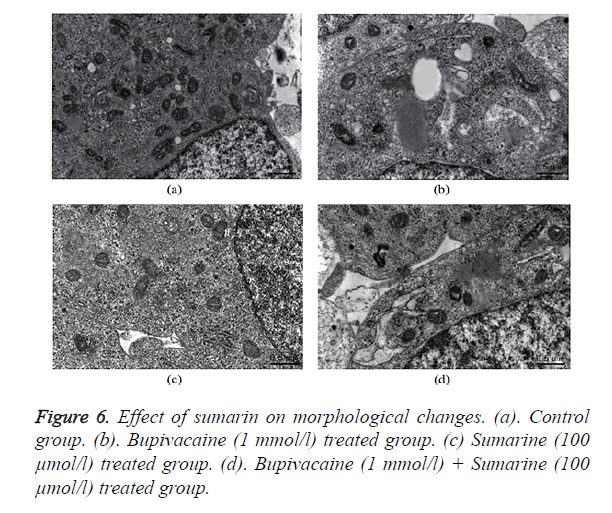 Literature also suggested that local anaesthesic activates Caspase and thereby stimulate the cell death through activation of apoptosis [4]. Drugs decreases the Caspase activity attenuates the process of apoptosis effectively [21]. This study suggests that sumarin effectively decreases the activity of Caspase 3 and 9 in SHSY5Y neuronal cells. Even TEM study also demonstrated the protective effect of sumarin on morphological characters of mitochondria and endoplasmic reticulum of bupivacaine induced neurotoxicity in cell.

Present investigation concludes the neuroprotective effect of P2X4 receptor antagonist in local anaesthesic induced neurotoxicity. It also postulates the possible mechanism of action of sumarin as it decreases the apoptosis of neuronal cells by reducing ROS accumulation, decreasing Caspase 3 and 9 activity and protecting the morphological changes.