Oxytocin is a posterior pituitary hormone with important physiological functions. Oxytocin has traditionally important biological functions in regulating the uterine smooth muscle activity and milk ejection during lactation. This study was conducted on albino Wistar female rats to evaluate the effect of oxytocin on carbachol induced lacrimation. Groups of animals (n=7) were injected with oxytocin or its agonist [Thr4, Gly7]oxytocin 25 minutes before carbachol injection (0.6mg/kg i.p). In groups of animals pretreated with saline, there was 31.4 μl increase in carbachol induced tear secretions which was further increased to 65.2 μl and 47.3 μl, respectively after oxytocin and [Thr4, Gly7]oxytocin pretreatment. These results suggest a novel facilitatory role of oxytocin in carbachol induced lacrimation.

Oxytocin, a posterior pituitary hormone is synthesized in the paraventricular and supraoptic nuclei of the hypothalamus. Oxytocin serves several physiological roles in the body e.g. in parturition, lactation and behaviour regulation [1]. The oxytocin receptor is a G protein coupled receptor and consists of 391 amino acids in the protein [2]. Oxytocin has been shown to play important roles in the brain. Oxytocin has been linked to emotional behaviour and social bonding in animals [14]. Oxytocin exhibits differential binding in the discrete brain sites of male and female rats [3]. The hormone has been shown to mediate responses from the amygdala to the autonomic nervous system [4]. Oxytocin mediates differrential responses to anxiety and fear. Thus oxytocin has been shown to have both autocrine and paracrine functions [1].

On the other hand, lacrimation from the lacrimal glands may be modulated by neurotransmitters and neuromodulators. The parasympathetic nerves mediate the release of lacrimal secretion through the pterygopalatine ganglion. The presence of oxytocin has been shown in the harderian glands [5,6]. An interaction of oxytocinergic neurons with cholinergic system has been shown by earlier studies [7]. Oxytocin has effects on local neural circuits and on membrane electrical characteristics [8]. We speculated a facilitatory role for oxytocin in the lacrimation process. This study was therefore conducted to observe the effect of oxytocin pretreatment on carbachol induced lacrimation in female Wistar rats.

Female Wistar rats (200-250 g) were used in this study. The animals were fed with rat chow and drinking water was provided ad libitum. The animals were housed in polypropylene plastic cages under hygienic conditions. A 12 hour dark:light cycle was maintained. The animals were kept under the accordance of protocols approved by the institutional animal care and use committee.

Drugs used for this study

Lacrimation was induced in the animals using a previously described technique [9]. The animals were pretreated with test drugs and 25 minutes later carbachol (0.6mg/kg i.p.) was injected to all the animals. After 10 and 20 minute intervals, the tear secretions were collected in glass capillaries and the volume of tears was evaluated using a microliter syringe.

Statistical evaluation was done utilizing the Mann Whitney U test for unpaired experimental data. The values expressed are mean ± SE of n=7 animals. Differences were considered to be significant when p < 0.05.

Fig.1 shows the dose-dependent effect of carbachol on tear secretions measured in microlitres. Increasing doses of cholinomimetic agent carbachol i.e. 0.2 to 0.6 mg/kg resulted in an increased lacrimal secretions to 10.7, 21.2, 31.4 μl, respectively. Fig.2 demonstrates the effect of pretreatment with oxytocin (20 μg/kg ip) on carbachol induced tear secretions. Carbachol alone (0.6mg) showed only a release of 31.4 μl of tear which was found to be increased to 65.2 μl in oxytocin treated animals. This increase was statistically significant. On the other hand, [Thr4, Gly 7] oxytocin produced a potentiation of carbachol, albeit less than oxytocin i.e. 47.3 μl.

Figure 1: Dose dependent increase in lacrimation induced by carbachol (0.2-0.6 mg/kg i.p.) in rats. The total volume of tear secretions is given in microliter collected 10 and 20 minutes after carbachol injection. The data are represented as mean ± SE. 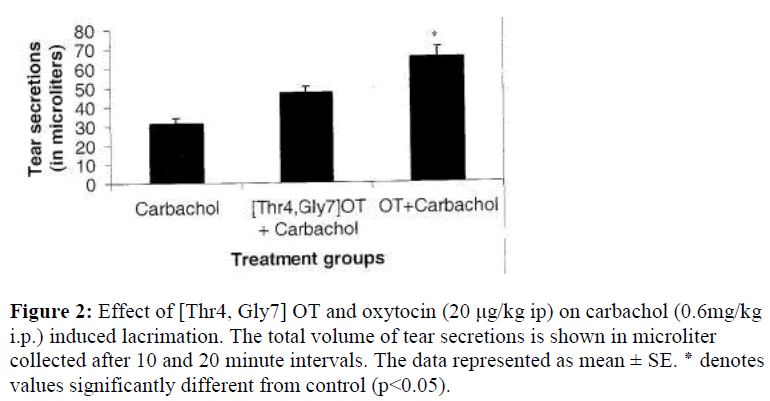 The results of this study demonstrate that oxytocin potentiates carbachol induced lacrimation. The secretions of tears by lacrimal gland is controlled largely by parasympathetic nerves via the pterygopalatine ganglion. Parasympathetic nerve activities are closely related to the secretory volume in the rapid flow phase of the lacrimation [10]. Two earlier reports suggest the existence of oxytocin in the harderian gland, however our finding is the first to suggest that lacrimation is potentiated by oxytocin. Neuromodulators have also been shown to modify lacrimation. The results of this study suggest that oxytocin interacts with cholinergic system to enhance lacrimal secretions. An interaction of oxytocin with the cholinergic system has been suggested by Boccia and Baratti [11]. Walsusinski [12] has shown that oxytocin may actually stimulate cholinergic neurotransmission in the hippocampus and reticular formation.

Oxytocin receptors are expressed in various parts of the body. Oxytocinergic neurons may contribute in multifaceted actions in the brain [13]. Oxytocin has been assigned for several physiological functions such as in parturition, milk ejection and metabolism. A role for oxytocin in emotion and social bonding has been suggested in several studies [14]. There is sexual dimorphism to the binding of oxytocin in the discrete sites of brain and female rats may be more susceptible to the actions of oxytocin. In fact the sex steroids may modulate the actions of oxytocin [3]. Our study was conducted on female rats therefore its importance is greater in this context [15]. This study reveals that oxytocin potentiates the cholinergic nerve actions on lacrimation in female rats. An interaction of oxytocin and aquaporin has been suggested by Jeon et al [16]. Oxytocin has been found to redistribute AQP-2 in apical and basolateral membrane in the kidney. Whether oxytocin plays a similar role in the eyes has yet to be examined in details. Our preliminary experiments conducted with aquaporin blockers DMSO suggest that aquaporin could also be involved in oxytocin induced stimulation of lacrimation. The existence of aquaporin water channels in the eyes has been suggested in several studies [17]. This study therefore could speculate a possible role of oxytocin in crying induced lacrimation. Further studies are required at the molecular and cellular level to elucidate this phenomenon. 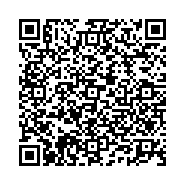