Objective: The traditional Chinese medicine Oxymatrine (OMT) has numerous biological effects, such as anti-inflammatory, anti-fibrosis, anti-proliferation and anti-tumor. However, the underlying effect of OMT on vascular smooth muscle cells remains unclear. Herein, the aim of this study is to investigate the role and mechanism of OMT on MOVAS (a mouse vascular aortic smooth muscle cell line) proliferation induced by Platelet-Derived Growth Factor-BB (PDGF-BB).

Methods: Firstly, we assessed proliferation in MOVAS subjected to PDGF-BB induction or controlled intervention with/without OMT treatment. And then we detected cell cycle, cell apoptosis and the expression levels of cyclins, Cyclin-Dependent Kinases (CDKs) and p21 of each group.

Results: In the present study, we found that OMT remarkably restrained the proliferation induced by PDGF-BB stimulus. Additionally, it was demonstrated that cell population of MOVAS treated with OMT in the S phase was reduced, but that of MOVAS in the G0/G1 phase was increased when compared to the PDGF-BB group. However, OMT treatment showed no effect on MOVAS apoptosis. Mechanistically, the expression of cyclinD1-CDK4/6 and cyclinE2-CDK2 were inhibited, while the expression of p21 was increased in MOVAS treated with OMT.

Conclusion: These results demonstrated that the inhibitory effect of OMT on proliferation of MOVAS were in part due to G0/G1 arrest by inhibiting cyclinD1-CDK4/6 and cyclinE2-CDK2, and promoting p21 expression. Therefore, OMT might become a new strategy for treating excessive proliferation of vascular smooth muscle cells in the future.

Studies have shown that Vascular Smooth Muscle Cells (VSMCs) can secrete and release vascular regulating factors to maintain the physiological function of blood vessels [1,2]. However, excessive proliferation of VSMCs is the key pathophysiological process of neointima formation during atherosclerosis and post-angioplasty restenosis [3-5]. Thus, inhibition excessive proliferation of VSMCs is one of the important strategies to prevent restenosis after angioplasty. Platelet-Derived Growth Factor (PDGF) is an important regulator that stimulates the proliferation of VSMCs [6-8]. The binding of PDGF-BB, a subtype of PDGF, to its receptor triggers the activation of downstream signaling molecules such as Mitogen-Activated Protein Kinases (MAPKs) to promote VSMCs proliferation and growth [9-13]. Therefore, preventing the PDGF-BB induced VSMCs proliferation might be a promising strategy for treating the development of neointima in atherosclerosis and post-angioplasty restenosis in the future. Oxymatrine (OMT), one of the main bioactive ingredients of Sophorae flavescentis radix, which is known as a traditional Chinese herbal medicine extracted from the dried root of Sophorae flavescens Aiton [14,15]. Previous studies have demonstrated that OMT shows a wide-range of pharmacological effects, including anti-inflammatory, anticancer, antiviral and immunomodulatory effects [14,16-19]. In recent years, the cardio-protective effects of OMT are becoming more and more arresting, and it has been used to treat cardiovascular diseases via anti-arrhythmic effect, vasodilative activity, hypolipidemic, positive inotropic effect and resistance of ventricular remodeling [20-25]. However, whether OMT exerts pharmacological effect on PDGF-BBinduced MOVAS (a mouse vascular aortic smooth muscle cell line) proliferation is not yet clear. Therefore, this study intends to explore the influence of OMT on MOVAS proliferation, and lay the theoretical basis for clinical intervention on atherosclerosis and post-angioplasty restenosis.

Cell proliferation assay was performed according to the manufacturer’s instructions of Cell Counting Kit-8 (CCK8). Firstly, cell suspension was inoculated in a 96-well plate and incubated. The MOVAS cells were then incubated with the CCK8 solution at 37°C for two hours. And then the absorbance of each well was measured at 450 nm (A450) by using a microplate reader.

The MOVAS cells (about 2-5 × 106 cells) were collected by trypsin digestion, and these cells were washed with PBS for twice, then centrifugation to harvest cells. After re-suspending the cells with PBS, 5 ml of pre-cold 70% ethanol was added to fix cells overnight at 4°C. Next day, the cells were washed with PBS after discarding ethanol. Then, 0.3 mg of Ribonuclease A (R5125, Sigma-Aldrich) and 0.015 mg of PI (P4864, Sigma- Aldrich) were applied to stain cells in darkness. To avoid clumps, the stained cells were sorted by using BD FACS Aria™ III sorter for cell cycle analysis (n=3).

The total protein of the MOVAS cells was extracted by RIPA. After the protein denaturation, 20 μg of total protein was loaded and separated by using SDS-PAGE at 120 V for 120 min. Subsequently, the protein was transferred to a Polyvinyl Difluoride (PVDF) transfer membrane (IPVH00010, Millipore) at 4°C, which then blocked with 5% non-fat milk at room temperature. Following this, the membranes were incubated with indicated primary antibodies including cyclinD1, CDK4, CDK6, cyclinE2, CDK2, p21 and GAPDH overnight at 4°C with gentle shaking. The membranes were washed with TBST, and incubated with secondary antibodies respectively at room temperature with sharking. The protein signals were detected by using ChemiDocTM XRS+ system (Bio-Rad) (n=3). And GAPDH was used as a loading control. 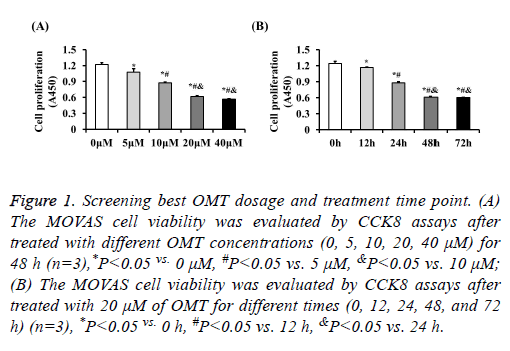 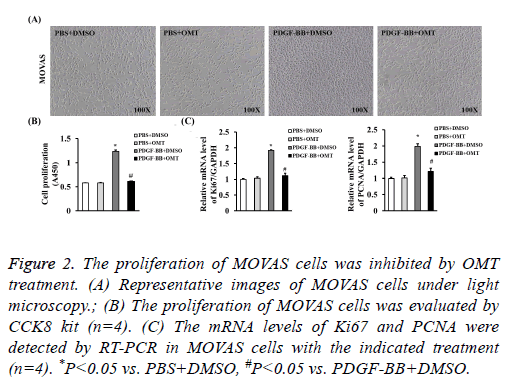 Cell proliferation is tightly related to cell cycle progression, to elucidate the mechanism of MOVAS proliferation regulated by OMT, we evaluated cell cycle progression of MOVAS. Synchronized with serum starvation, the MOVAS cells were caused cell cycle arrest at G0/G1, and subsequently labeled with PI and analysed by flow cytometry. It was found that Sphase population was significantly increased and G0/G1 phase was significantly decreased in PDGF-BB group, while G0/G1 phase of MOVAS in PDGF-BB treated with OMT group was remarkably increased and S-phase population was significantly decreased. These results indicated that OMT treatment induces MOVAS cell cycle arrest in G0/G1 phase (Table 1). 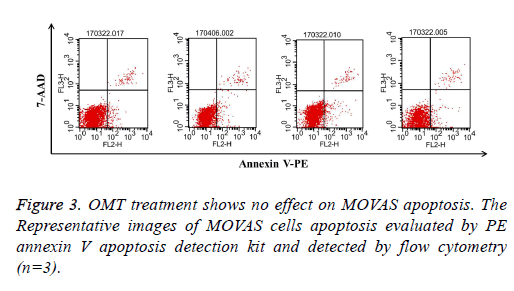 G0/G1-phase to S-phase transition is primarily regulated by cyclinD1-CDK4/6, cyclinE2-CDK2 [28,29]. Additionally, p21 could downregulates cyclinE2 and CDK2, which contributed into cell cycle arrest [30]. To investigate the levels of these proteins in OMT-treated MOVAS induced by PDGF-BB, the protein levels of them were checked by Western blot. It was shown that the expression levels of cyclinD1, CDK4, CDK6, cyclinE2, and CDK2 were decreased in MOVAS treated with OMT and PDGF-BB, while the level of p21 was increased when comparing to PDGF-BB group, which suggested that OMT inhibited the G1/S-phase transition probably via downregulating cyclinD1-CDK4/6 and cyclinE2-CDK2, and upregulating p21 (Figure 4). 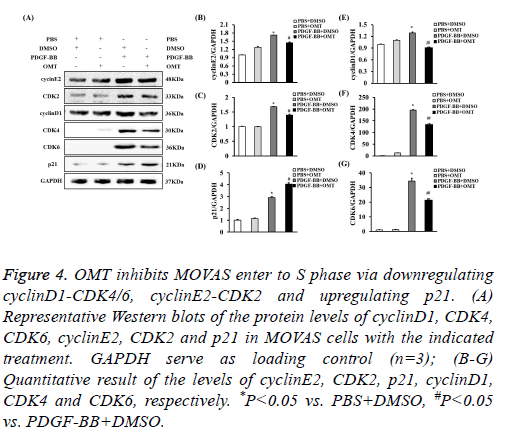 In the present study, we tried to detect the effect and the probable mechanism of OMT on VSMCs in vitro. We found that: (1) OMT inhibited the proliferation of MOVAS induced by PDGF-BB; (2) OMT induced cell cycle arrest of MOVAS in G0/G1 phase; (3) OMT showed no effect on MOVAS apoptosis; (4) OMT inhibited the G1/S-phase transition of MOVAS probably via downregulating cyclinD1-CDK4/6 and cyclinE2-CDK2, and upregulating p21 after PDGF-BB stimulation. Thus, this study firstly found that the antiproliferative effect of OMT on MOVAS through the inhibition of DNA synthesis via G0/G1 arrest, which indicated that OMT might be used as a novel therapeutic agent to mediate excessive proliferation of VAMCs in the future.

As we known, excessive proliferation of VSMCs is the important pathophysiological process of neointima formation [31-33]. After vascular injury, a variety of growth factors, cytokines and chemokines are synthesized and secreted, which can stimulate VSMCs phenotype switching, accelerate VSMCs migration to inner membranes, induce the excessive proliferation of VSMCs and further lead to vascular restenosis [34-36]. PDGF, mainly expressed in VSMCs and endothelial cells, promote mitosis and play an important role in the proliferation of VSMCs [6-8,37]. The binding of PDGF-BB, a subtype of PDGF released from injured vessels, to its receptor can trigger the activation of downstream and then contribute significantly to VSMCs proliferation [9-12]. In this paper, PDGF-BB could effectively induce MOVAS proliferation, which was consistent with the previous studies reported.

Additionally, it was also found that OMT can significantly suppress MOVAS proliferation induced by PDGF-BB, retard MOVAS in G0/G1 phase cannot smoothly into the S phase. The cell cycle is a highly controlled process involved regulatory factors cyclins and CDKs [36,38]. In the early of G0/G1 phase, cyclinD1-CDK4/6 complex can promote G1 transit to S phase; late in the G0/G1 phase, cyclinE2 combined with CDK2 also can further promote G1 phase enter into S phase [38]. In the present study, it was found that OMT not only inhibited cyclinD1-CDK4/6 expression, but also decreased cyclinE2- CDK2 expression. In addition, as we all know, p21 could down-regulate cyclinE2 and CDK2, which is involved in cell cycle arrest [30]. Thus, we detected the expression level of p21, it was shown that the expression level of p21 was increased in MOVAS treated with OMT and PDGF-BB when comparing to PDGF-BB group. Collectively, it can be speculated that OMT inhibited MOVAS proliferation induced by PDGF-BB probably through inhibiting the expression of cyclinD1-CDK4/6 and cyclinE2-CDK2 complexes and promoting the expression of p21, thereby blocked MOVAS in G0/G1 phase and can't enter into the S phase.

In conclusion, our results illustrated that OMT inhibited PDGF-BB-induced proliferation of MOVAS via G0/G1 arrest, resulting from downregulated cyclinD1-CDK4/6 and cyclinE2- CDK2, and upregulated p21. Therefore, our study indicated that with its anti-proliferation effect, OMT might be valuable as a therapeutic agent for managing atherosclerosis and vascular restenosis in the future. However, detailed regulatory mechanisms of cyclins-CDKs and p21 involved in the process of OMT affects VAMCs proliferation should be deeply discussed. Additionally, how OMT regulates VAMCs proliferation, atherosclerosis and vascular restenosis remains to be further demonstrated in vivo with animal models.

The authors would like to thank all members of Department of Pediatric cardiovascular medicine, Woman and Child Hospital of Hubei Province (Wuhan, China) for their expert technical assistance and advice.