Canthus is either corner of the eye where the upper and lower eyelids meet. The inner canthus is called as nasal or medial cantus while Outer canthus is known as lateral or temporal canthus. The inner canthus represents the fleshy, pink lachrymal caruncle and the canaliculi which lead into the lachrymal sac. Anthropometry is the study of the systemic measurement of the different parts of the human body in order to determine their respective proportions [1,2]. Orbitofacial anthropometrics have become an important tool used by genetic counselor and in reconstructive surgery. The diagnosis of many dysmorphic syndromes is based on advanced cytogenetic and molecular techniques. Before referring a case for costlier molecular diagnostic tests, recognition of subtle morphological anomalies and corresponding useful diagnostic test should be determined.

Physical growth is a fundamental vital process and the common property of life. The normal distance between the orbits varies during embryogenesis and after birth in accordance with the general craniofacial development [3]. Hypertelorism is an excessive distance between eyes and it is an integral part of various syndromes, e.g. Cat eye syndrome [4]. Dysmorphic characters are usually reported by clinicians in descriptive terms such as ‘wide set eyes’, ‘broad nose’ or ‘large mouth’. However such descriptions are subjective. Anthropometric measurement can overcome these problems. Using both morphological features and measurements, the face can either be reconstructed (identifying the dead), superimposed or compared to a facial photograph (mistaken identities or missing persons) or for the reconstruction surgeries after accidents [5]. Congenital and posttraumatic deformities can be better treated with the knowledge of normal values for this region to produce the best esthetic and functional result [3,6]. Earlier many researchers have studies craniofacial parameters and come up with standard formulations based on ethnic or racial data (7-12). Hence, the present study was undertaken to find normative orbitofacial measurements of population residing in Chhattisgarh region. In addition, the relationship between orbitofacial dimensions and advancing age was explored.

In the present study, 1000 subjects (ages between 7 to 40 years) (515 males and 485 females) were included. All these subjects were resident of Chhattisgarh region obtained from urban schools, students admitted in the medical college and the patients attended the ophthalmology OPD for refractive correction [otherwise normal] and resident of Chhattisgarh region. Inclusion criteria were age between 7 to 40 years and with normal craniofacial configuration. Exclusion criteria were the cases with the history of neurological disease, developmental disabilities, oculofacial trauma, craniofacial congenital anomaly, strabismus and clinically manifested telecanthus or epicanthus. The subjects were divided in three groups according to age as children of age between 7 to 14 years, young adults age more than 14 to 25 years and adults age more than 25 years upto 40years. Group of children included 195 boys and 192 girls, group of young adults included 263 males and 243 females and group of adults included 57 males and 50 females. Between age 7 to 25 years, the growth pattern was also studied yearly.

After being informed consent had been obtained, measurements of inner canthal distance (ICD) and outer canthal distance (OCD) were performed. For ICD ,the distance between the medial canthus of both eyes and for OCD the distance between the lateral canthus of both eyes were measured using digital Vernier caliper. Precautions taken during measurement were included cleanliness of instrument, check for Zero error and check for Parallax error (error due to wrong positioning of the eye). The subject was seated comfortably in the chair in a relaxed state and in an upright position with his/her head at the same level as the examiner’s head. The Vernier caliper was gently placed on the medial canthus and outer canthus of the eyes and the ICD and OCD were measured respectively. Data was analysed statistically using ‘t’ test. Difference of growth pattern according to sexual dimorphism was also studied. 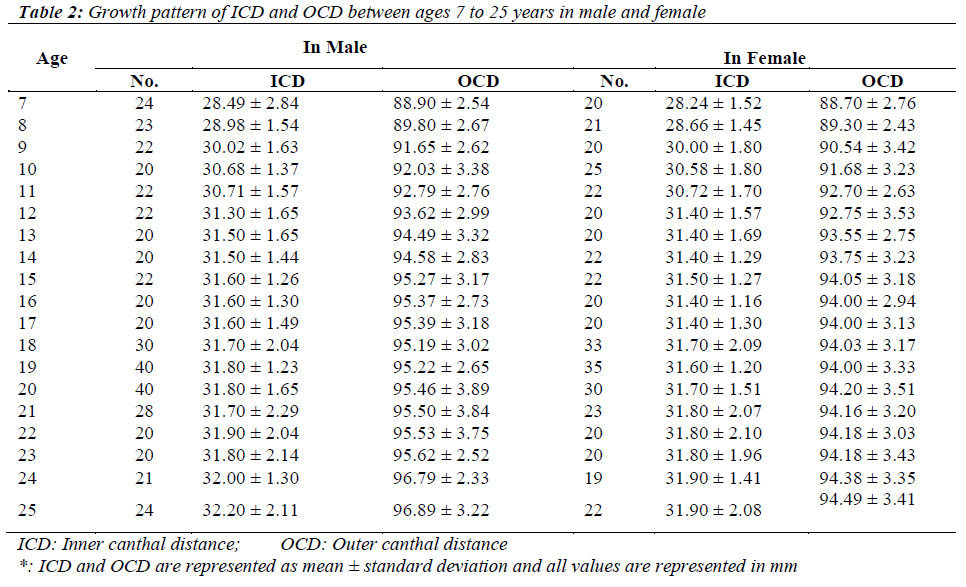 Table 2: Growth pattern of ICD and OCD between ages 7 to 25 years in male and female 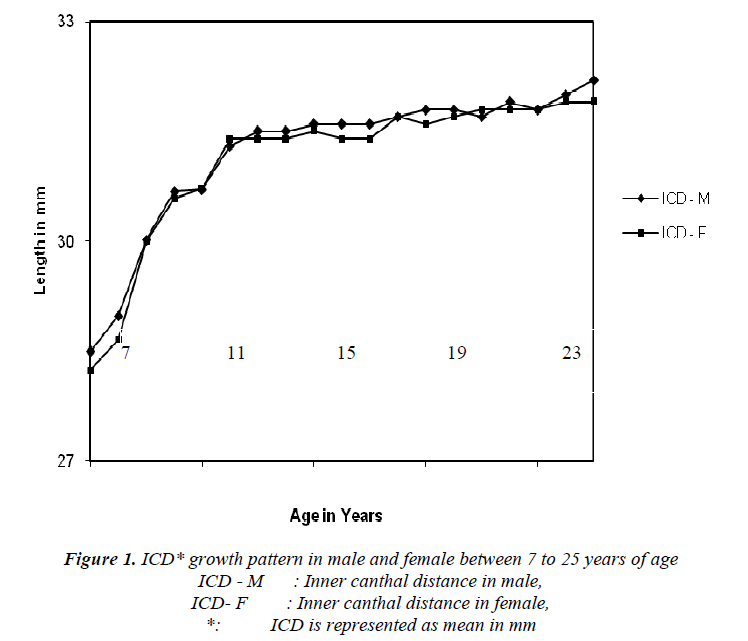 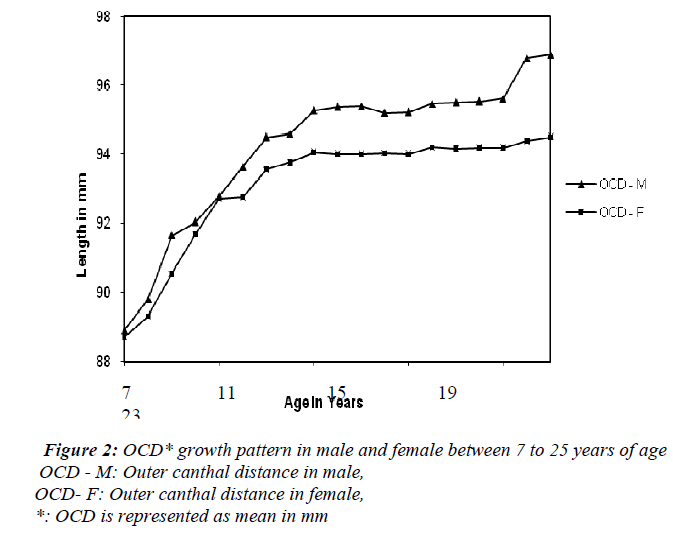 Functional and cosmetic craniofacial surgery involving the eyelids and eyebrows requires knowledge of the anatomic relationships of the landmarks as it is important in the human appearance [3]. Ocular adnexal changes and somatometric traits of the face such as epicanthus, telecanthus, flat nasal bridge, widely spaced eyebrows, and blepharophimosis may create an illusory fault in the identification of certain craniofacial syndromes, and reliable methods are needed for the diagnosis of some craniofacial anomalies [3,7]. Therefore, normal values for ICD and OCD are integral measurements in the evaluation of telecanthus and ocular hypertelorism. Congenital and posttraumatic deformities (e.g., traumatic telecanthus) can also be better treated with the knowledge of normal values for this region to produce the best esthetic and functional result. For these reasons, standards based on ethnic or racial data are desirable because these standards reflect the potentially different patterns of craniofacial growth resulting from racial, ethnic, and sexual differences. In the present study, age group of 7 to 40 years of age was taken because of the fact that younger children might not cooperate fully with examiner and based on the assumption that any increase in the measured parameters with the age would have stopped by age of 40 years.

In the present study, all orbitofacial parameters i.e., ICD and OCD were found to be significantly higher in young adults than children but the differences were not significant in young adults and adults. This might be due to the primary spurt of the growth during childhood and due to the fusion of ossification centers in later age of life. All the orbitofacial parameters were found increasing between 7 to 25 years. The age at which maximum growth occurs was found to be between 8 to 9 years.

In conclusion, the present study documents the anthropometric variation pattern of the orbitofacial parameters of population residing at Chhattisgarh region and presents normative data for the measured parameters, specific for age and sex. This data may be used as an important tool for diagnosis of many dysmorphic syndrome by genetic counselor, in reconstructive surgery and for identifying dead or live person by forensic expert.