Automated speaker recognition from speech signals plays a major role in the field of biometrics to authenticate the speaker. Though considerable research is carried out in this area, sensitivity and specificity of the proposed technique are not satisfactory. In this paper, language independent speaker recognition system using spectral features is proposed to increase the sensitivity of speaker recognition. Flux, short time energy, centroid, pitch, period and number of peaks are extracted from time domain coefficients, autocorrelation coefficients, discrete wavelet coefficients and cepstrum coefficients. Adaptive Resonance Theory (ART) network is used for identifying the speaker from the above features. From the research, it is found that the combination of features provides the best sensitivity for speaker recognition. In addition to the spectral domain features, time domain features also add intelligence to the proposed technique by increasing the accuracy to above 98%.

In certain applications like defence, forensic, biometric security and search engines, large volumes of audio signals are stored, transmitted and processed through networking. These applications aim at identifying the speaker from his/ her audio signals in order to provide access. Of the various biometric systems, speech recognition system is simple to implement as it does not require a specialized sensor for signal acquisition and processing. In such systems, a large volume of speech signals of authorized persons is acquired. Same set of features are determined for the key speech signal and is compared with that of the database signals. If these parameters match, the speaker is permitted. Else, he is denied access. Clustering and classification are the two important identification techniques. Patel and Nandurbarkar developed a speaker recognition system for Guajarati language. Weighted Mel Frequency Cepstral Coefficients (MFCC) features extracted from the speech samples are given to Gaussian Mixture Model (GMM) for classification. The recognition rate is high for weighted MFCC [1]. In recent years soft computing techniques are widely used for ranking the audio signals. Richardson et al. presented a Deep Neural Network (DNN) feature extraction for speaker and language recognition to improvise the system performance. The authors used an indirect mechanism for automatic speaker recognition in which frame level features are extracted from a DNN to accumulate multi modal statistics. The extracted features are trained using i-vector system [2]. Vimala and Radha developed a speaker independent isolated speech recognition system for Tamil language. MFCC features were extracted and given to six different classifiers to study the performance of the system.

However the performance of the classifiers can be greatly improved with a proper choice of the features used for describing the audio signals. Also, the above neural networks suffer from elasticity plasticity instability, which means that if the networks are trained with the new set of data, they forget the old data set. Hence the major challenges in developing speaker recognition system are in identifying features which have lesser intra class variance and higher inter class variance and using a classifier that has elasticity plasticity equilibrium. In this work, flux, short time energy, centroid, pitch, period and number of peaks are used for describing the audio signals. These features are derived from both time domain and spectral domain coefficients of the audio signals. An ART classifier is used for retrieving and ranking the audio signals. This paper is organized as follows: Section 2 deals with the data base collection which is the backbone of this research. In section 3, the methodology is discussed. Results and discussions are elaborated in section 4. This paper is concluded with future scope in section 5.

An extensive research database is created and maintained for implementation of the proposed speaker recognition system. The database consists of speech signals acquired from 7 male and 3 female speakers (age group of 18-22 years). From each speaker, a total of 30 signals are collected (10 in Tamil, 10 in Telugu and 10 audio signals of English). A total of 330 signals in three different languages are acquired by deliberately varying the frequency, pitch and timbre. Figure 1 shows the tree diagram of audio signal acquisition.

Of the various features used for describing speech signals, flux, short time energy, centroid, pitch, period and number of peaks are considered in this work. Choice of these features is based on the following facts: The rate of vibrations in the vocal fold determines the fundamental frequency which in turn can be obtained from the pitch [10]. Period is an indicator of the size and tension of the speaker’s vocal folds. Centroid is the measure of high frequency component in the audio signal [11]. For a frame of speech signal {x(n), n=0,1,..,N-1}, and k=0,1,..,N-1, autocorrelation coefficients are extracted using equation 1 [12], cepstrum coefficients using equation 2 [13] and wavelet transform coefficients using equation 3 [14].

Where Wavelet spectrum of a signal x(t) is

is the wavelet function, a represents scale and b represents time translation. Similarly ART classifier is chosen because it can be trained with both supervised and unsupervised learning techniques. In an ART network, learning occurs only after reaching the resonant state. During resonance, if a new pattern is provided, the network rapidly searches its stored patterns for a match. If no match is found, the new pattern is stored. In this way elasticity plasticity stability is obtained [15-17 ]. The flow diagram for the proposed speaker recognition system is shown in Figure 2. Performance of the proposed system is measured in terms of sensitivity. 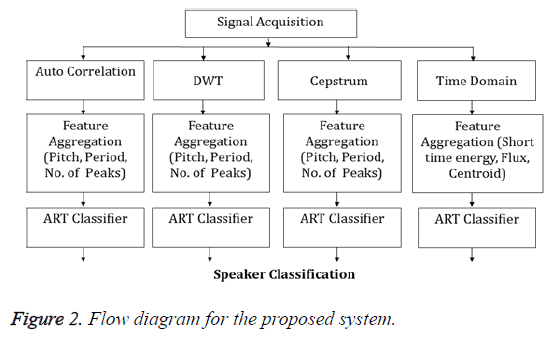 From each signal 1024 samples (sample number 10000 to 11024) were considered for processing. Flux, short time energy and centroid are determined from the time domain coefficients of the preprocessed audio signals. Autocorrelation of the preprocessed audio signal for the first male speaker in three different languages (English, Tamil, Telugu) are shown in Figure 3. Similarly approximation and detailed coefficients of the same speaker in three different languages are shown in Figures 4 and 5 respectively. For the first speaker, the sample speech waveforms in all the three languages (Telugu, Tamil and English) and the corresponding cepstral coefficients are shown in Figures 3-5. Period, Pitch and Number of peaks obtained from Discrete Wavelet Transform coefficients of the speech signals is shown in Table 1. For 5 speakers, samples of three signals in each language is listed in Table 1. Since Discrete meyer wavelet provides higher inter class variance and lesser intra class variance, it is considered for extracting the features [18]. 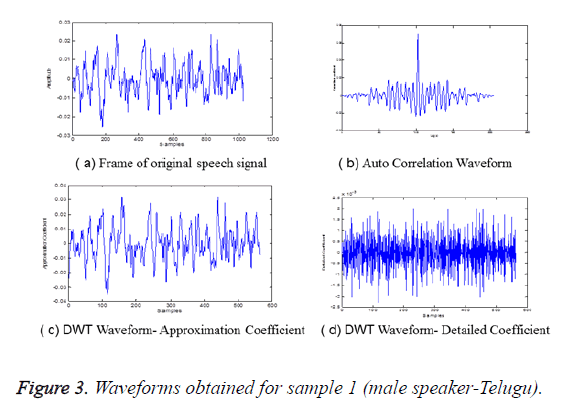 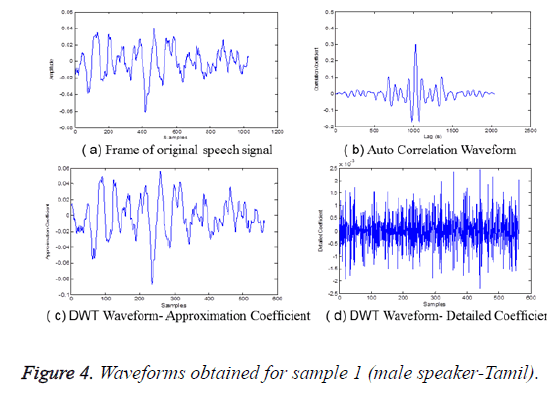 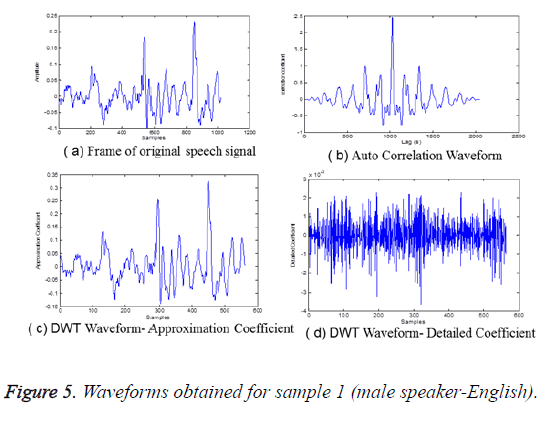 For the same sample of 5 speakers, the spectral features obtained using autocorrelation function is shown in Table 2.

In Table 3, the feature obtained using cepstrum for the sample of 5 speakers in all the three languages in listed. 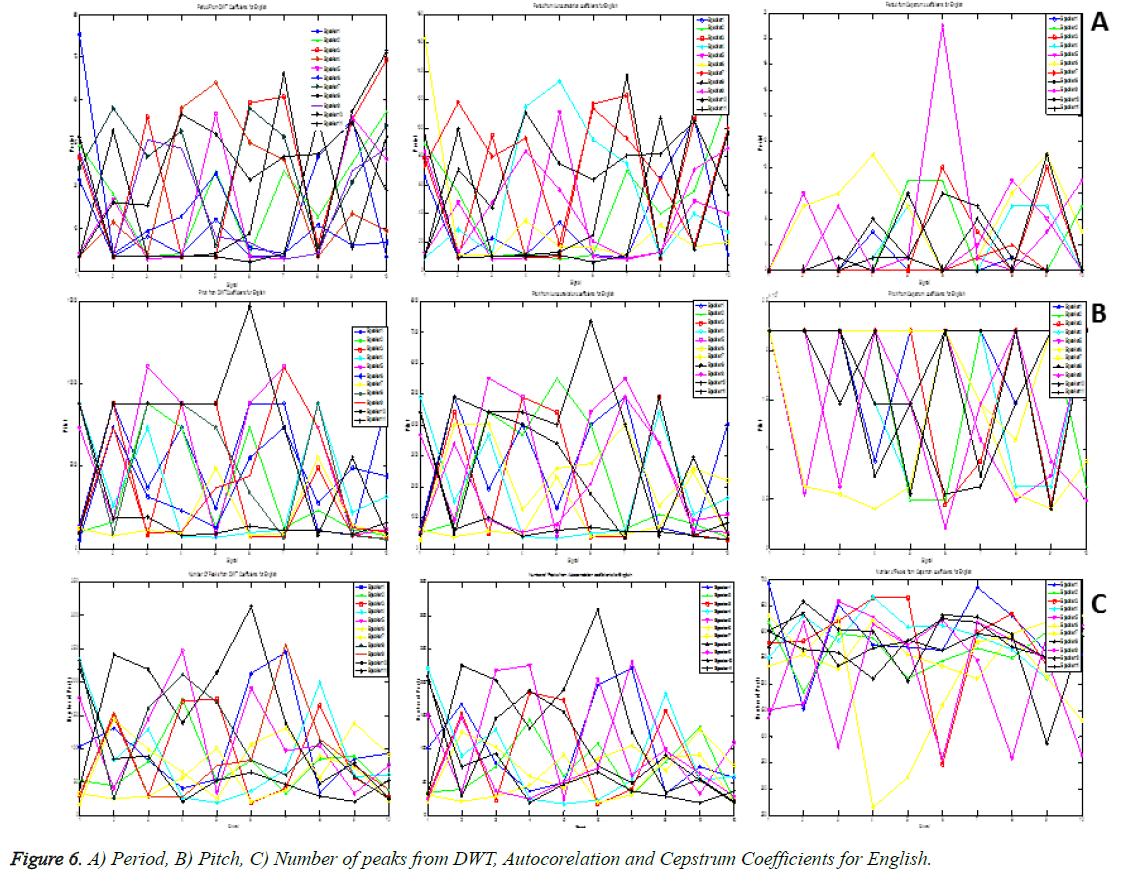 Figure 6: A) Period, B) Pitch, C) Number of peaks from DWT, Autocorelation and Cepstrum Coefficients for English. 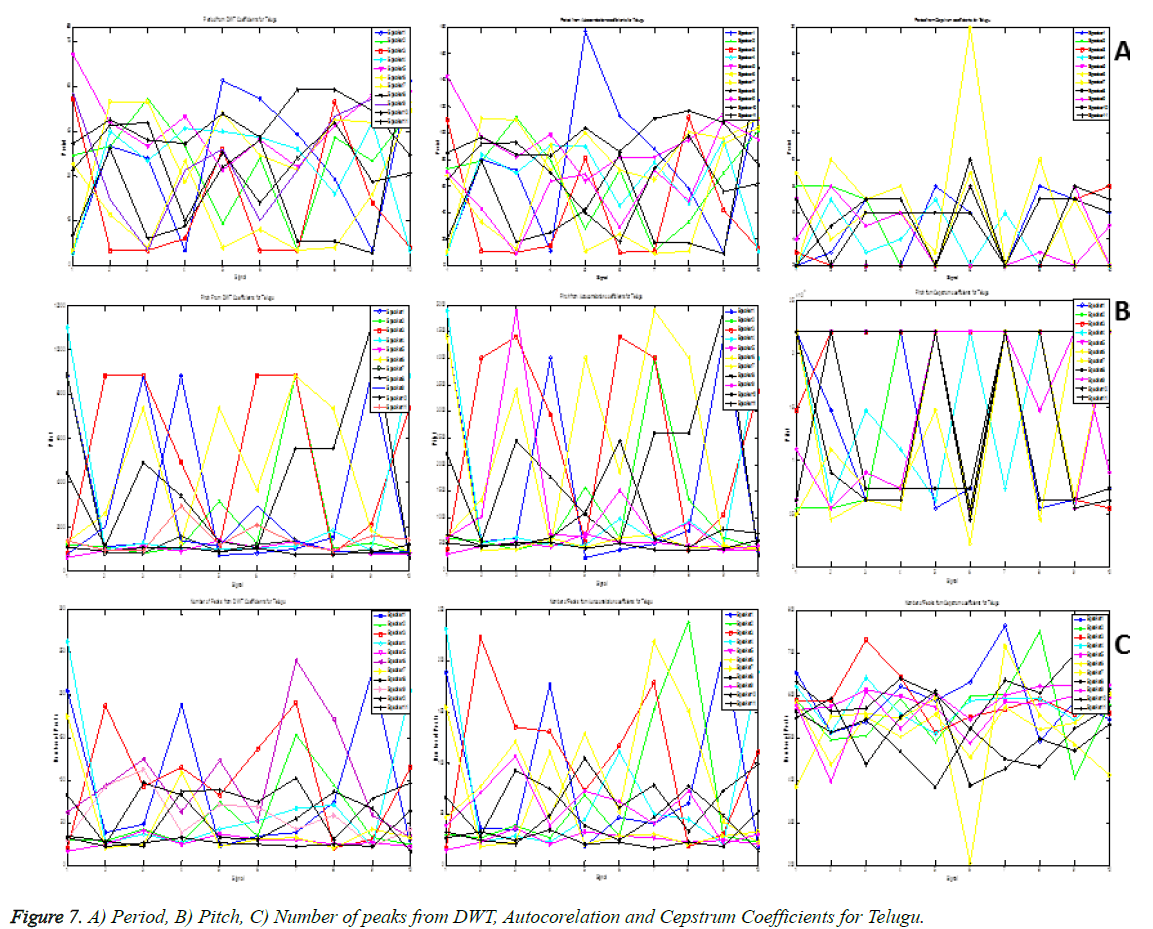 Figure 7: A) Period, B) Pitch, C) Number of peaks from DWT, Autocorelation and Cepstrum Coefficients for Telugu.

From the Figures 6 and 7, it is found that pitch, number of peaks and period from cepstrum co-efficients has lesser interclass variance when compared to that obtained from autocorrelation and DWT coefficients. Pitch and period from the DWT coefficients has the highest interclass variance. However, the intraclass variance of pitch and number of peaks from the cepstrum coefficients is lesser than the other techniques. Hence training with a combination of these parameters will provide better results when compared to that of training with individual techniques. The features extracted using the spectral coefficients, whose samples were listed in Tables 1-3 are given to an ART classifier. A total of 330 speech signals is given to an ART classifier for training and 165 signals were considered for testing. 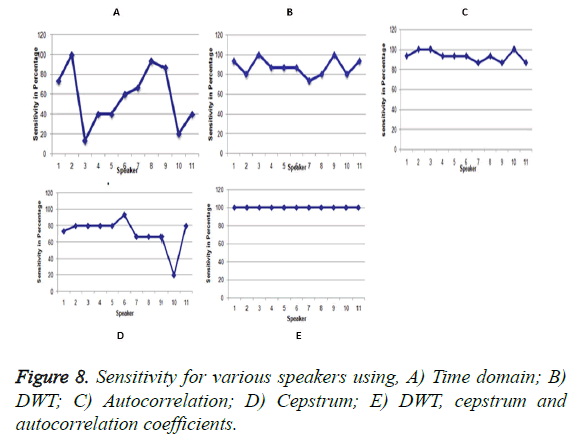 In Table 4, the consolidated sensitivity percentage for all the speech signals of each speaker using various transforms is listed. From the obtained results it is clear that, the combination of all the features using the transforms DWT, autocorrelation and Cepstrum gives 100 % speaker recognition. 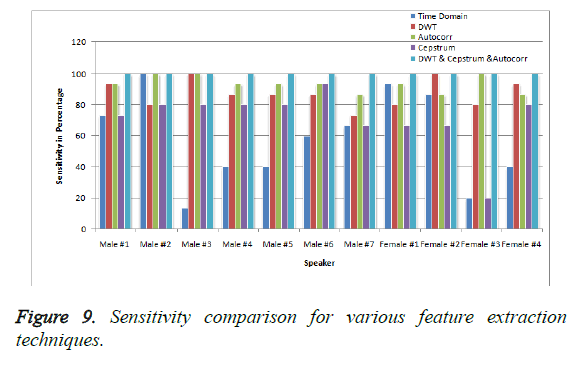 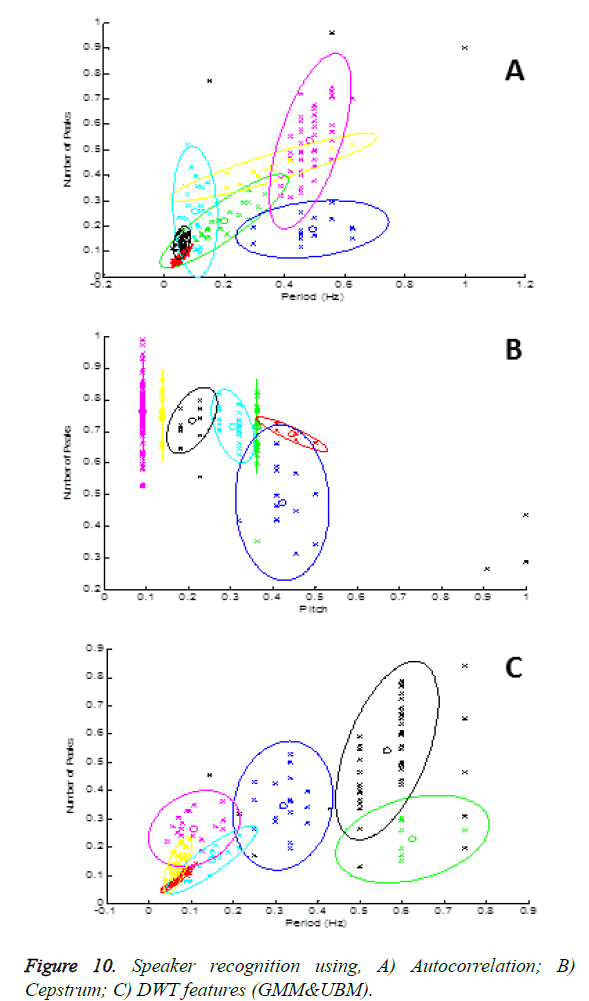 The number of false rejections obtained by the existing GMM&UBM model and the proposed ART based classifier system using DWT features, autocorrelation features and cepstrum features were compared and the results are shown in Figure 11. 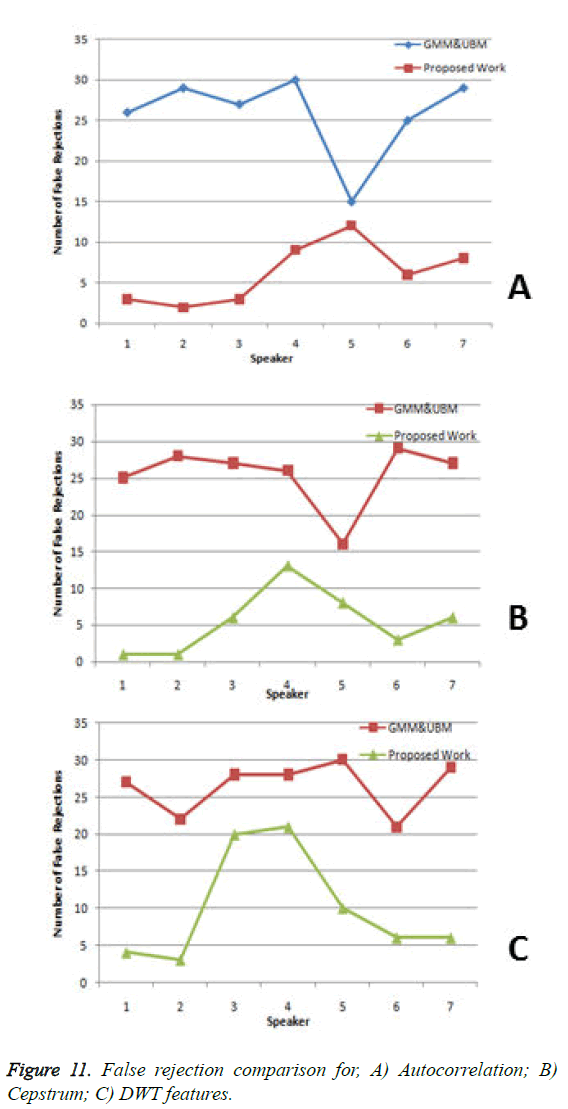 From the Tables 5-8 and from the Figure 11, it is found that the proposed ART based classifier system outperforms the existing systems.

An efficient Speaker recognition system is developed using an ART network based on the features extracted from the transformed co-efficients of the audio signals. In this paper, various transformations like DWT, autocorrelation and cepstrum are considered. Pitch, number of peaks and period are the features extracted from the transformed coefficients. It is found that sensitivity is high and above 98% for the combination of features. Major contribution of the proposed work is that these features are obtained in such a way that irrespective of the spoken language, the speaker is identified and provided access. However the feasibility of proposed system in robust environment is yet to be explored. In future, the technique is to be modified for speech signals affected by noise in real time environment. Hardware can be implemented for the proposed work for biometric security.