In this paper an evolutionary algorithm, which can be used for non-linear optimization problems, is introduced. The non-linear system taken up for the study is conical tank system because it is used in the field of medical sciences. Its non-linearity is due to the cross sectional behaviour of the process for the evacuation of products without wastage is possible. To control the level for the tank, the closed loop performances are determined with the conventional PI controllers. It is optimized by an Optimization algorithm which is motivated by the egg laying activities of bird cuckoo. The major advantage of this method is simplicity and used as a simple optimization algorithm. Application of the projected algorithm to some standard functions and a real problem has confirmed its capability to deal with difficult optimization problems. Simulation results show that the proposed the proportional integral controller outperforms with its optimization.

The level control in a process industry provides a major role in the industries. The raw material may include solvents, slurries, viscous and solids [1]. To pass up the rusting and maintain the flow of the process evenly can be done by using a conical tank system. Owing its shape in conical tank the raw resources can be disposed easily and quickly. It assures optimal rousing and addition of ingredients. It provides a fast and hygienic cleaning. The majority of the pollution happening occurs due to spillage, overcapacity of tanks, reduced practice and poor treatment facilities. In the highly industrialized countries, to improve the process safety and efficiently utilize resources can be made by controlling of level. In the developing countries, the main endeavour is the production of products should be fast for developing process automation [2]. The furthest requirement in the process automation is used in many industries like the petrochemical industry, chemical industry, Pharmaceutical industry and power generating engineering [3,4]. The significance of automation knowledge provides a tremendous to increase in the process industries. The control of level in tanks is an essential issue in process industries without providing wastage to the materials used. However the automation provides more difficulties due to the non-linearity behaviour of the conical tank system. The nonlinearity is due to the shape because the area of cross section is non-uniform. A controller can be designed for a nonlinear process but it is difficult and terribly hard to realize it. The principle assignment of the controller design is to accomplish the ideal working conditions and to design the controller to attain its most favourable execution performance.

A nonlinear process, whose process variable changes the parameters which is considered for conical tank level process. The desired set point level is maintained with a fixed and controlled outlet flow rate. The process gain and time constant are the important precipitate which varies as a function of level in the chosen process. The need to control a level for the reason that if the level becomes too high which may upset reaction equilibrium of the total process in which it may cause damage to apparatus, or cause in spillage of expensive or perilous material from the process [4]. If the level is too low, it may provide bad consequences for the chronological operation carried out by the process. Therefore, control of liquid level is an important responsibility in process industries. Non-linear model is used wherever accuracy in a wider range of operation is required where they can be directly incorporated into control techniques. The non-linear conical tank system which finds wide application in process industries [4]. The nonlinearity which is due to its change in shape [5-7] and their shape assures optimal stirring and mixing of ingredients and provides a fast and hygienic cleaning.

This paper aims to create a new algorithm for the non-linear conical tank, called Cuckoo Search, which depends on the breeding behaviour such as brood parasitism of cuckoos. Behaviour of Cuckoo depends on the characteristics of Levy distribution of levy flights and then formulate the new search and it its implementation.

The mathematical modelling and the various controller techniques for the conical tank system are determined. Optimization methods like the cuckoo algorithm are to determine the proportional and integral value with the minimization of integral square error.

Cuckoo optimization algorithm is developed depending on the brood parasitism of the bird name as the cuckoo has a habitat of laying eggs in the nest of other (host) birds. To avoid that the host birds discover their eggs, they remove the eggs laid by other birds and also increases the possibility of hatching their own eggs in the communal nests. In this host birds can slot in direct clash with the obtrusive cuckoos [8-10]. If the eggs of the cuckoo are identified by the host birds, they will throw the Martian eggs away or build new nest elsewhere. Some of the female cuckoos are very special in mimicry the pattern and color of the host eggs to which they lay their eggs. In this cuckoo brood parasitism can be classified as the different types first as intraspecific brood parasitism [10,11] next as mutual breeding, and the last as nest capturing. In general, the eggs of cuckoo will hatch a little earlier than other host eggs [12,13]. When the cuckoo chick is hatched, the first impulse deed will take is to eject the host eggs by blindly propel the other host eggs away from its home nest, that can increases the cuckoo chick’s which can gain food provided by its host bird.

Various study show that a cuckoos chick can also able to mimic the dub of host chicks to realize admittance to added food feeding prospect.

Levy flight is a method of using a haphazard walk probability distribution in which the step length is considered [14]. If the walk is defined in a space whose dimension is greater than one then their steps are designed using isotropic random directions. The distribution of step size (U) is based on function

Where D is fractional dimension. Levy flight is a mixture of long trajectories and short, random movements. It is generally interspersed with the Brownian motion of the animals or birds but they are not so efficient when compared with the levy search. Its characteristics are based on the multi scale normal diffusive patterns. Such behaviour can be applied for the optimization and optical search which provides a better capability. Cuckoo search can be done by using three ideal rules [15-17].

The cuckoo will lay only one egg at a time, and chuck its egg in randomly chosen nest.

The best nests with high quality of eggs will carry over to the next generations.

The number of available host nests is fixed, and the egg laid by a cuckoo is discovered by the host bird with a probability pa (0,1).

In such cases, the host bird if it finds the alien egg it can either throw the egg away or remove the nest, and build a new nest. For simplicity, this last rule can be approximated by the fraction value of pa. The n nests are replaced by new nests (with new random solutions) for its maximization problem.

The fitness quality of a solution can simply be relative to the value of the objective function. Levy flights and random walk can be given by an equation.

Where Et is the normal standard distribution with zero mean and standard unity deviation for random distribution or for levy flights using levy distribution. It is used to link the likeness between the eggs of the cuckoo and the host bird which is very difficult to implement. The iterations can be made fixed using he step size [18].

The mathematical model of the conical tank can be determined, by considering the assumptions (i) control variable (level) (ii) the manipulated variable (Tank inflow) [8]. This is accomplished by controlling inflow of the tank. The Figure 1 shows the schematic diagram of the conical tank system. 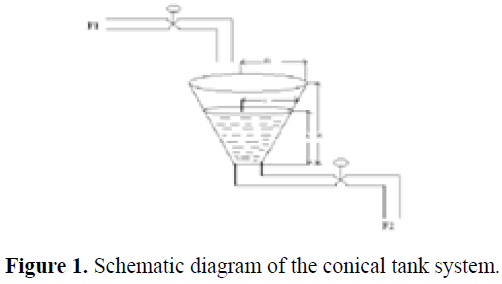 r-Radius of nominal level of the tank

Mass balance Equation is given by

Where a-Outlet area of the tank

Transfer Function (TF) is given by taking the partial differentiation of the linearized equation and its corresponding Laplace transform [9]. 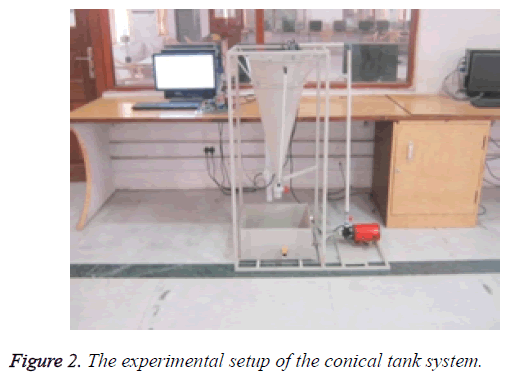 Figure 2: The experimental setup of the conical tank system.

Based on the specification the transfer function is given by

Formulas for various controller tuning techniques and its values are shown in Table 2.

Table 2: Formulas for various controller tuning techniques and its values.

Ziegler Nichols method: The open loop response of the given transfer function is determined so as to calculate the tuning parameters. Ziegler Nichols tuning method is used to tune the parameters at an optimum level [27].

Cohen-Coon method: The Cohen-Coon method is said to be offline method for tuning of process it is because that the step change can be given to the input once it is at steady state. The output is calculated depending on the time constant, its time delay and its response can be evaluated to control the initial parameters [28].

Simulation results are carried out for various controllers using Matlab software and it is compared with the Cuckoo optimization algorithm and implemented in the experimental setup. 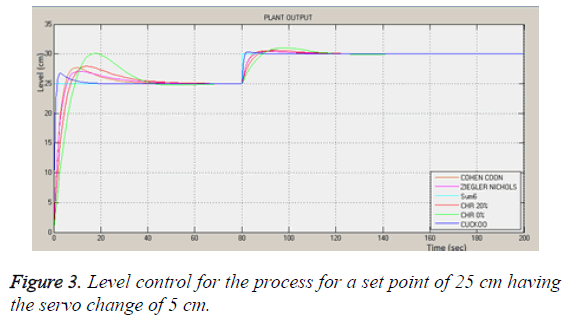 Figure 3: Level control for the process for a set point of 25 cm having the servo change of 5 cm. 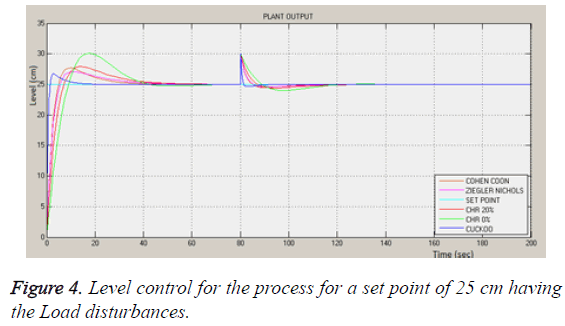 Figure 4: Level control for the process for a set point of 25 cm having the Load disturbances. 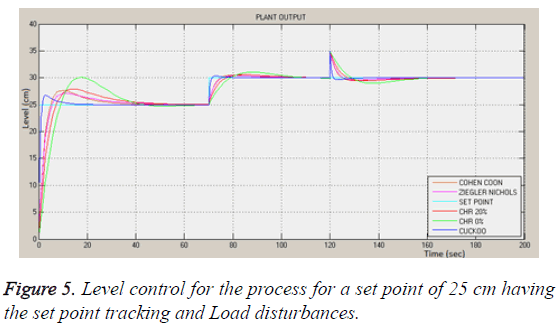 Figure 5: Level control for the process for a set point of 25 cm having the set point tracking and Load disturbances. 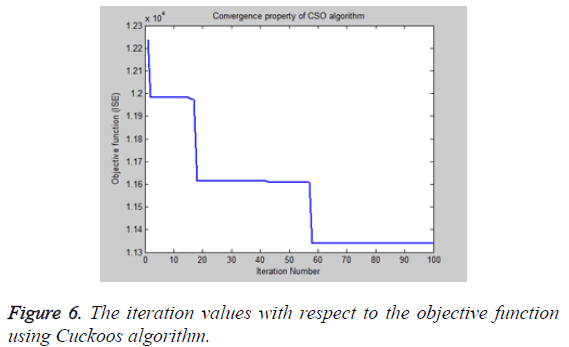 Figure 6: The iteration values with respect to the objective function using Cuckoos algorithm.

In this paper an optimized PI control output is determined based on the various iteration of the given transfer functions using CSO algorithm, the P and I values are determined. The comparison was made for various times domain specifications like rise time, settling time, overshoot and it is determined that CSA provides minimum settling time, minimum rise time and overshoot. The errors are reduced by performances indices like ITAE, IAE and ISE. The experimental results show that CSO algorithm provides better output when compared with other techniques. Thus cuckoo algorithm gives a better performance when compared with the other conventional controllers and it can apply to determine the PI controller values to provide better control of level in conical tank system.