A rare case of an acute open dorsal perilunate dislocation of the left wrist was encountered in a 42 year old male with the exposure of the lunate volarly. It was associated with ulnar artery injury and complete ulnar nerve palsy. It was treated by open reduction and internal fixation through dorsal and volar approaches after a thorough debridement. That was complicated with a forearm compartment syndrome which was treated by a fasciotomy. To my knowledge, this is the first reported case of a perilunate dislocation associated with ulnar artery and nerve injury.

A 42 year old healthy gentleman fell off the roof of his new home while trimming tree branches on his outstretched left hand resulting in a severe injury to his wrist. He was first seen at a rural hospital and then was transferred to Kingston General Hospital within 3 hours from the time of the injury. Physical examination reveals a 7 cm long transverse laceration from the midline volarly to the level of the ulnar styloid dorsoulnarly. The lunate bone was clearly visible in the gaping wound volarly. There was significant dirt in the wound. The radial pulse was palpable. The median nerve was intact. There was no motor or sensory function of the ulnar nerve at all. It was difficult to assess the ulnar artery at that time. There were no associated injuries.

We therefore performed a limited repair using sutures on the volar capsule with the intent that these would be removed at the second procedure to facilitate irrigation and debridement. The wounds were left open and the splint was applied. The plan was to return him to the operating room at 48 hours to complete the staged procedure. However, in the postoperative hours he continued to have a lot of pain and x-rays taken indicated that the carpus had subluxed partially in spite of the splint that had been applied and our feeling intraoperatively that the wrist would be relatively stable in this splint , at least for couple of days. In retrospect, the carpus would have been more stable if we had used crossed K-wires to maintain the reduction and having K-wires placed initially would

The patient was given intravenous antibiotics and tetanus toxoid. Plain x-rays were taken (Figs. 1, 2). The patient was taken to the operating room on an emergency basis with a four hour time gap between injury and surgical treatment. He underwent irrigation and debridement of the wound. We confirmed the findings of the preoperative x-rays and we found that the entire carpus went dorsally and radially leaving the lunate and the radius sticking out of the compound wound. Surprisingly the lunate had essentially buttonholed between the ulnar nerve and the ulnar artery. The ulnar artery had been torn and stretched and we ligated both ends of the severed artery. Circulation of the hand was being maintained entirely through the radial side collaterals. Careful exploration of the ulnar nerve determined that it remained physically intact. The carpus was easily reduced after irrigating and debriding the wound. The reduction was confirmed with fluoroscopy. We then performed a carpal tunnel release. The median nerve was confirmed to be intact as were the flexor tendons. Because the wound had been grossly contaminated, we felt that a second look irrigation and debridement should be carried out before performing definitive internal fixation of the carpus as this would prevent us from gaining full access to the carpus at the second irrigation and debridement procedure. have not interfered with the infection control. 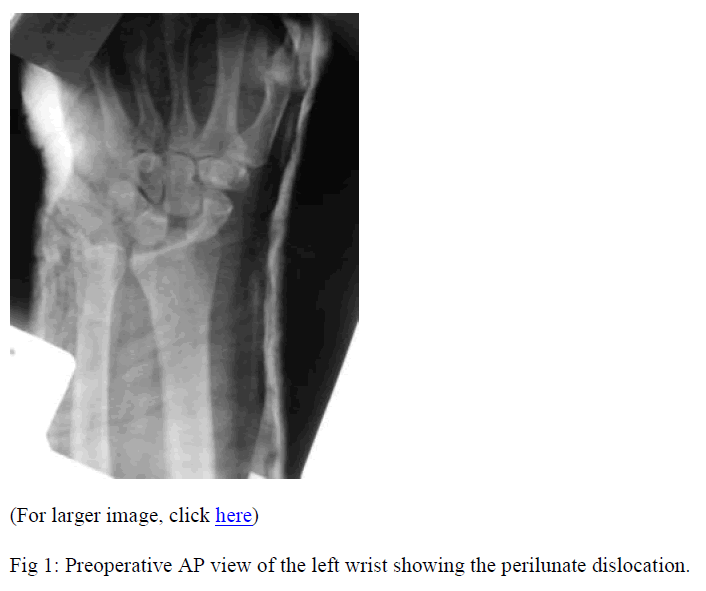 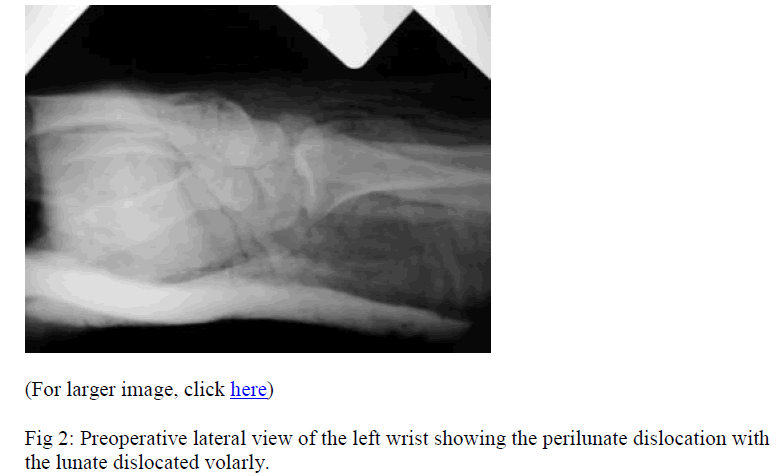 So, we took him back to the operating room about 12 hours after the start of the first operation. Repeat irrigateion and debridement was performed. Utilizing the surgical and traumatic incisions on the volar side of the wrist and a standard dorsal exposure through the third/fourth compartment interval, we performed a definitive open reduction and internal fixation of the perilunate dislocation. K-wires were passed between the lunate and the triquetrum and the scaphoid and lunate. Suture anchors were used to repair the scapholunate ligament back into the lunate and to repair the lunotriquetral ligament. The dorsal capsule was repaired. Tears in the volar capsule between the carpal bones and between the radius and proximal row were also repaired using non-absorbable sutures. Intraoperative x-rays demonstrated acceptable alignment. At the end of the procedure, the tourniquet was deflated. All tissues appeared viable. The median nerve and ulnar nerve appeared intact and lying comfortably in their normal positions. It was relatively easy to close the wounds which we did. He was placed in a short arm splint post-operatively. Post-operative x-rays were taken (Figs. 3, 4). 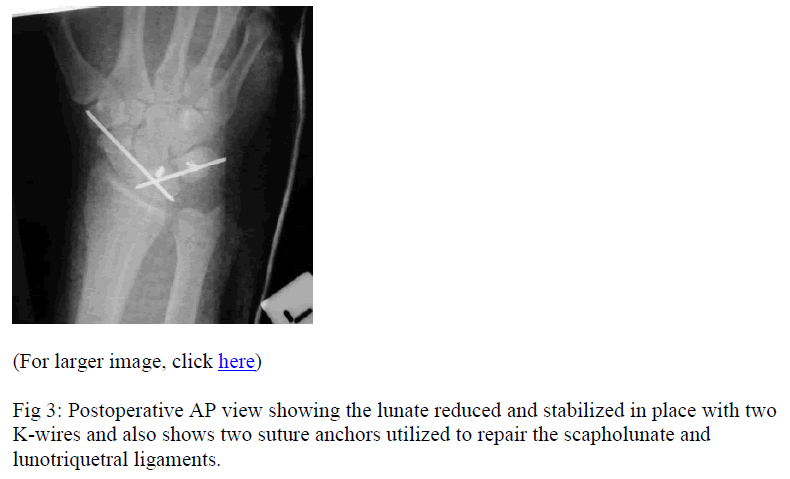 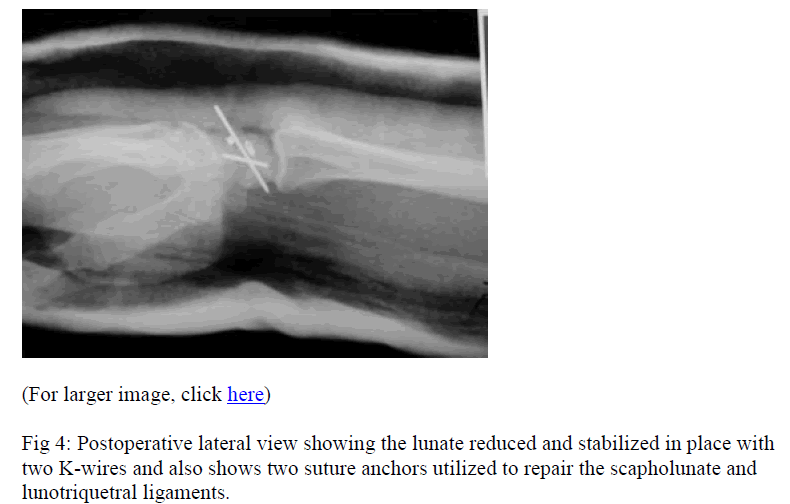 Subsequently a few hours later, he was noted to have severe pain beyond what is expected after such procedure. The pain was not relieved by the narcotics. Physical examination demonstrates pain with passive stretch of the fingers and tight forearm compartments. There was a decreased function of the median nerve distribution. As before, there still was no evidence of ulnar nerve function. We therefore took him back to the operating room to treat the compartment syndrome. We reopened the wound. All of the distal forearm muscles appeared pink and healthy. There was no evidence of the devitalized tissue. Median and ulnar nerves were physically intact as before. We did a volar forearm fasciotomy and we extended our incision distally to further decompress the median nerve. The dorsal compartment of the forearm was assessed after the fasciotomy and found to be soft. Five days later, the patient was taken to the operating room for repeat debridement and split thickness skin grafting. He was discharged home a few days later in a thumb spica cast. He was followed up in the clinic at two weeks mark. His skin graft healed well. There was no evidence of ulnar nerve function, either on motor or sensory examination. He demonstrated progressive median recovery. X-rays demonstrate acceptable reduction and stable fixation with the K-wires and suture anchors; he was placed in a thumb spica cast. At 6 weeks visit, The K-wires were removed. The thumb spica cast was changed into a thumb spica splint and he was started on range of motion exercises. The patient was followed up for a year after the injury, he has done exceedingly well from such severe injury. He became pain free. He has returned to work. His range of motion is surprisingly good. Finger and thumb motion is full. Wrist flexion is 55° and extension is 30°. Radial deviation is 10° and ulnar deviation is 25°. Pronation and supination are full. Grip strength was 24 kg compared to 42 kg in the right hand. Surprisingly, he completely recovered from the ulnar and median neuropathy. He has full sensory recovery, two point discrimination is in the 6 to 7 mm range in all fingers, and there is no weakness or wasting of the median or ulnar innervated intrinsics. Nerve conduction study was only done at this time and shows no signs of neuropathy in the ulnar or median nerves. The x-rays look acceptable and there was no evidence of carpal instability or avascular necrosis.

Perilunate dislocations are uncommon and are unfortunately frequently missed. The natural history of untreated injuries is progressive traumatic arthritis with pain and dysfunction [1]. The first step in treating perilunate dislocation is to restore the carpal alignment by closed or open reduction. Delayed treatment has been shown in several reports to significantly compromise the result [1,2]. Although closed reduction and percutaneous pinning have been recommended by some authors, more reliable results can be achieved with open methods, usually through combined volar and dorsal approaches [3]. The dorsal approach is between the third and fourth dorsal compartments, whereas the volar approach proceeds through the carpal canal. The “rent” through the volar capsule and the ligaments should be repaired [4]. Because of the severity of this injury, some loss of motion is inevitable regardless of the treatment method [5].

Cooney reported a 50% loss of wrist motion and 60% diminished grip strength have been reported after treatment [6]. Other complications related to this injury include median nerve injury, carpal instability and transient ischemia of the lunate [7]. One of the disastrous complications is traumatic arth ritis [6,8]. One of the most important factors in obtaining a desired result is early recognition and treatment [9].

Lin YK et al [10] reported acute open dorsal perilunate dislocation of the left hand which was encountered in a 30 year old man with exposure of the lunate and distal radius. The injury was treated with a debridement and open reduction through a dorsal approach.