Epidermodysplasia verruciformis (EV) is a rare disease caused by human papillomavirus (HPV) infection. Part of skin lesions at the exposed site would become malignant, but few cases with squamous cell carcinoma (SCC) transformation at unexposed sites have been reported. In December 2016, one EV patient with squamous cell carcinoma transformation at unexposed sites (perianal region) were admitted and treated at our hospital. Here we reported the clinicopathological characteristics and our surgical management of the SCC skin lesion of this EV patient. We deem that once local malignant transformation occurs, early surgical resection should be performed, and skin without lesions at the unexposed sites should be selected as the donor site for skin graft or skin flap transplantation.

Epidermodysplasia verruciformis (EV) is a rare disease caused by human papillomavirus (HPV) infection [1]. In most cases, EV showed autosomal recessive inheritance. Akgul et al. believed that EV was related to the defects of EVER1/TCM6 gene or EVER2/TCM8 gene on chromosome 17 [2,3]. The disease was sporadic and mostly occurs in childhood. With patients more than 40 y old, part of skin lesions at the exposed site would become squamous cell carcinoma (SCC), but few cases with SCC transformation at unexposed sites have been reported. In this manuscript, we reported one case of EV with squamous cell carcinoma at unexposed site and shared our surgical management of the SCC skin lesion to help the current evidence in this rare disease regard.

A 52-y-old male patient with flat papules on the trunk, limbs, scrotum, and buttocks for more than 30 y visited the hospital, as the perianal erythema had pruritus and ulceration for 3 y. More than 30 y ago, flat papules with a rough surface appeared on the dorsum of the hand without obvious causes, but the patient had no obvious self-conscious symptoms. The flat papules with a rough surface gradually increased and widely appeared on the bilateral forearms, dorsum of the hand, dorsum of the foot, lower leg, chest, scrotum, and crissum. Three years ago, the perianal papules and lesions enlarged. They were complicated with pruritus and pain, ulcerated, and effused after scratching. The patient denied a family history of the disease. Physical examination showed many verrucous hyperplastic papules and lesions on bilateral forearms and the dorsum of hand and foot with different sizes and dry surfaces. Sporadic brown flat papules with varying sizes and smooth surfaces were present on the upper arms, trunk, and lower leg (Figure 1).

Figure 1: (A-C) Pictures of flat papules on the bilateral forearms, dorsum of the hand, the chest, and the scrotum of the patient; (D) HE staining (X100).

However, the scrotum had dark brown verrucous hyperplastic papules that merged into pieces. A round dark red perianal plaque with a size of 7 cm was present taking the anus as the center, and the surface was cauliflower-like with local ulcer and purulent exudate. The pathological examination of the scrotum revealed significant hyperkeratosis of the epidermis, hyperplasia and hypertrophy of the stratum spinosum, papillomatous hyperplasia, many hollow cells in the superior layer of stratum spinosum and granular layer, keratohyalin granule deposition, vascular dilatation of superficial dermis, and perivascular lymphocytic infiltration. The examination of the perianal region revealed hyperkeratosis accompanied by parakeratosis, hyperplasia and hypertrophy of the stratum spinosum, disordered arrangement of the cells in whole layers of epidermis, heteromorphosis, mitotic activity, and dyskeratocytes; also, dense lymphocyte infiltration was seen in the superficial layer of dermis. Therefore, the perianal region was diagnosed with SCC. The treatment of perianal SCC in situ was surgical resection of malignant perianal skin lesions. The resection range was 5 mm larger than the margin of the perianal plaque, and the depth was up to the subcutaneous fat layer. After excising the lesion, the perianal wound was treated with an intermediate split-thickness skin graft, and the donor area was the skin on the left lateral leg without lesions. Because of the particularity of the perianal region, the skin graft was not packed and bandaged after suture and fixation, and the local dressing was bandaged with pressure. Three days after the surgery, the dressing was opened because the patient needed defecation, and then the anus was cleaned again and dressed with pressure. The patient defecated once, and the dressing was changed once every 2 d. 10 d after the surgery, the stitches were removed, and the graft survived completely. Two months after the surgery, the wound healed well, and no new papules developed locally (Figure 2). 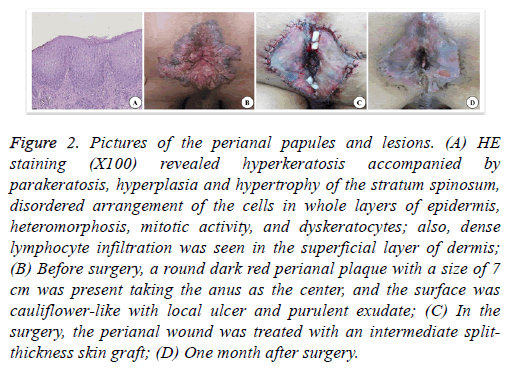 Figure 2: Pictures of the perianal papules and lesions. (A) HE staining (X100) revealed hyperkeratosis accompanied by parakeratosis, hyperplasia and hypertrophy of the stratum spinosum, disordered arrangement of the cells in whole layers of epidermis, heteromorphosis, mitotic activity, and dyskeratocytes; also, dense lymphocyte infiltration was seen in the superficial layer of dermis; (B) Before surgery, a round dark red perianal plaque with a size of 7 cm was present taking the anus as the center, and the surface was cauliflower-like with local ulcer and purulent exudate; (C) In the surgery, the perianal wound was treated with an intermediate splitthickness skin graft; (D) One month after surgery.

EV was characterized by scattered flat verrucous lesions on the trunk, extremities, head, and face with long course. The disease was easy to be secondary to Bowen disease, squamous cell carcinoma, or basal cell carcinoma. Most of the diseases develop from childhood, and the lesions at the exposed sites of the skin become malignant after a few decades, but the mechanism of carcinogenesis was still unknown [4]. EV patients were often simultaneously infected with multiple HPVs, mainly HPV3 and HPV5/8 [5,6]. HPV3 was often found in benign skin lesions and usually manifested as generalized flat verrucous skin lesions. Although HPV5/8 virus infection was found in more than 90% of EV malignant skin lesions, HPV5 was the most common type [7]. As the malignant transformation of skin lesions often occurs in exposed areas, the irradiation of UVB was considered as a synergistic factor of malignant transformation [8,9]. However, the malignant lesion of the patient in this report was located at the unexposed site (perianal region). Padlewska et al. found the expression of oncoprotein p53 in the unexposed skin lesions of patients with EV and speculated that besides ultraviolet radiation, other unknown factors also play a key role in the development of EV malignant tumors [10]. This would be used to explain the occurrence of malignant transformation in the skin lesions of unexposed sites. The perianal skin lesion of our patient showed pruritus, pain, and ulceration, and the skin biopsy confirmed the squamous cell carcinoma in situ. However, the deep tissue was not invaded, with any distant metastasis, which was in accordance with the characteristics of malignant transformation of EV. Simple surgical resection could be used for the treatment, and postoperative combined treatment was unnecessary.

The repair methods of direct suture, skin flap transplantation, or skin grafting could be selected according to the size, location, and local function of the wound after the resection of squamous cell carcinoma in situ. The wound of the patient was large and could not be directly sutured. Therefore, skin grafting was selected. The intermediate split-thickness skin graft was selected because the wound was located at the site of defecation, which needed a certain degree of abrasion resistance, and the postoperative wound was difficult to be stably pressed for a long time. Majewski et al. found that if the unexposed skin was selected for the donor site in the skin grafts after excision of EV malignant skin lesions, no malignant skin lesion occurred in the skin grafts for more than 20 y after the skin graft, while the skin around the skin graft developed malignant skin lesions at the early stage [11]. Therefore, an unexposed area without skin lesion (the lateral skin of the left thigh) was selected in this surgery. The possible reasons that the skin graft could survive well after the surgery were as follows: (1) The resection of squamous cell carcinoma in situ was deep to subcutaneous fat layer, and the blood supply of the wound was good; (2) The hemostasis of the wound was exact; (3) The skin graft was of suitable size. The tension should not be too large after the suture, ensuring that the skin graft could well adhere to the wound surface; (4) The natural curvature of the perianal region should be fully taken into consideration in local compression band aging after the surgery. The dressing thickness was different at different sites to ensure that the pressure of compression bandaging was uniform; (5) It might be related to the increased activity of transforming growth factor- (TGF-) in the skin lesions of EV [12].

In conclusion, no consensus existed on the effective treatments for EV. After the definite diagnosis, solarisation should be immediately avoided, and sunscreen cream should be used. Once local malignant transformation occurs, early surgical resection should be performed, and skin without lesions at the unexposed sites was selected as the donor site for skin graft and skin flap transplantation.