Odontogenic Keratocyst (OKC) is a clinicopathologically distinct form of developmental odontogenic cyst. It is known for its aggressiveness biological behavior and high recurrence rate. OKC has a distinct feature to occurin body of the mandible and ramus. This report describes a rare Caseofodontogenic keratocystin maxillary sinusof a35 year old female patient

Keratocysts of the jaw are benign cystic lesions which have a potential for keratinization. Philipsen (1956) and Pindborg, Hansen in (1963) described the clinical and histologic features of this non - inflammatory cyst that uniformly formed keratin. In 1971, the WHO simplified the classification of jaw cysts and made the terms primordial cyst and keratocyst synonymous. This classification emphasized the predominant histological features of the cyst rather than its presumed origin from the primitive enamel organ [1]. In 2003 odontogenic keratocyst (OKC) was designated by the World Health Organization (WHO) recommends the term keratocystic odontogenic tumour (KCOT)as it better reflects its neoplastic nature. WHO has reclassified the lesion as a tumour based on several factors, which include.

Histopathology: The basal layer of the KCOT budding into connective tissue and mitotic figures are frequently found in the suprabasal layers.

A 35 year old female reported to the Department of Oral Medicine and Radiology, Rajah Muthiah Dental College and Hospital with a complaint of pus discharge from the upper right back region of mouth since 3 months. History revealed that the discharge persisted even after the extraction of periodontally compromised 16.It was not associated with pain or any other discomfort (Figure 1). 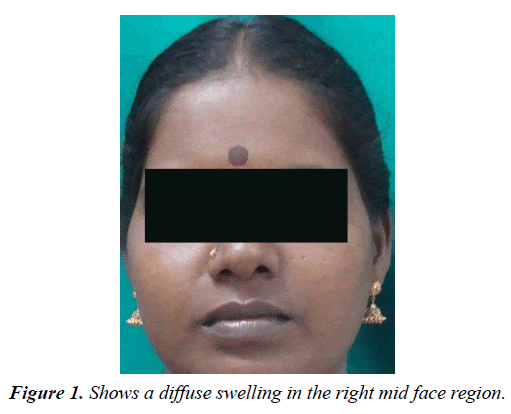 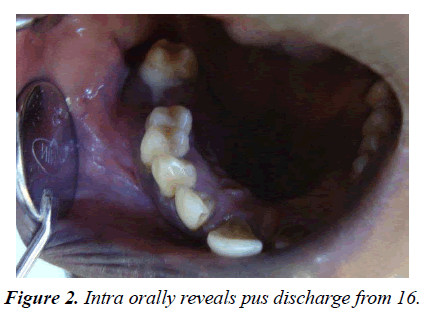 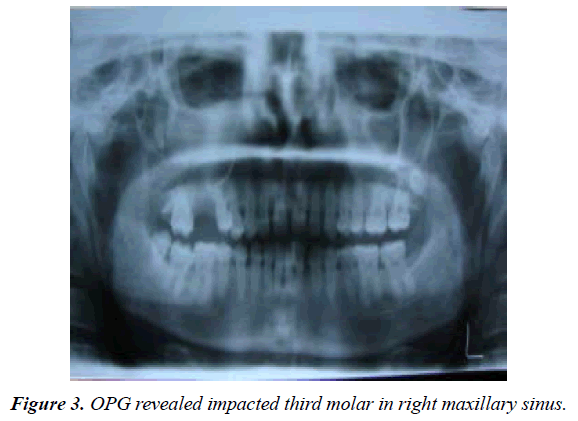 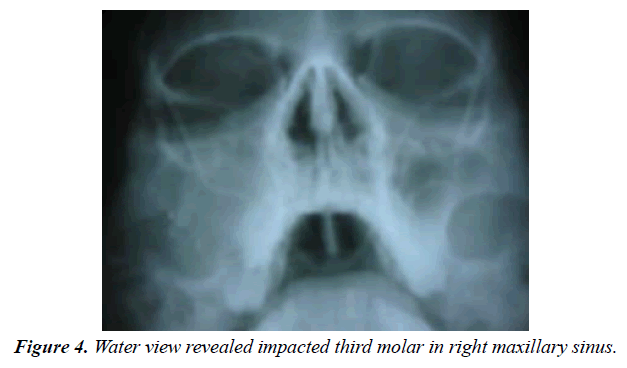 A well-defined expansile radilucentlesion s was appreciable in panoramic, waters view and computer tomographic images. On CT axial view a radiopaque mass measuring approximately 3×2 cms in diameter with 1712 HU resembling tooth like structure is seen in right maxillary antrum. Evidance of buccal cortical expansion with radiolucent mass enchroching into the right sinus was better appreciated in the axial view. Breech along the posterolateral wall of the maxillary sinus with deviation of nasal septum and effusion of nasal conchae was appreciated CT.

Surgical enucleation of the lesion along with impacted tooth was done under general anesthesia and tissue was submitted for histopathological examination. Histopathologial diagnosis of KCOT was made.

KCOT represents 10% to 12% of odontogenic developmental cysts[3,4].WHO defined KCOT as a benign uni- or multicystic, intraosseous tumour of odontogenic origin, with a characteristic lining of parakeratinized stratified squamous epithelium and it has high potential for infiltration and recurrence.

Peak frequency occur in 2 and 3rd decade. In our case patient was in her third decade of life. They occur most commonly in the mandible, especially in the posterior body and ramus region. In the present case, we report maxillary sinus involvement as a rare site of occurrence. The literature suggests that less than 1% of all case of KCOT occur in maxilla and exhibit sinus involvement. KCOT generally present with localized aggressive, asymptomatic swelling with spontaneous discharge into the oral cavity and mobility of the tooth are common symptoms. In the present case patients present with asymptomatic swelling and discharge. Nasal obstruction, parasthesia are rare symptoms [5].

Incomplete removal of the cyst lining, growth of a new KCOT from satellite cysts or odontogenic rests left behind after surgery and development of a new KCOT in an adjacent area are few of the proposed mechanism of recurrence reported in literature [2].

To minimize invasiveness and recurrence, the most effective treatment option appears to be enucleation of the KCOT and subsequent application of Carnoy’s solution. Alternatively, marsupialization followed by cystectomy is likewise effective, as this treatment does not result in a significantly higher rate of recurrence than enucleation plus Carnoy’s solution [8]. In the present case, surgical enucleation with Carnoys solution of the cyst was done under general anesthesia. Impacted tooth was removed along with the lesion.

KCOT occurring in maxillary sinus is a uncommon clinical presentation. Inherent limitation of OPG in interpretating maxillary lesion warrant CT evaluation. The aggressive nature of KCOT needs an aggressive treatment strategy. The odontogenic keratocyst have high rate of recurrence up to 62.5%.