Objective: Taste is an important sense for humans, but research on taste sensation is currently limited. Clinical evaluations of taste rely on subjective reports, and there are currently no objective evaluations available. In this study, we consider the possibility of objectively evaluating taste by measuring prefrontal cortex activity with functional near-infrared spectroscopy during taste stimulation with sweet, salty, sour, and bitter taste stimuli.

Methods: We recruited 6 male and 3 female healthy adult volunteers to participate in this study. Taste solutions or distilled water (as a control) were dropped onto the tongue using a dropper. The degree of discomfort in response to the taste solution was evaluated on a visual analog scale.

Results: We observed no significant differences between stimuli on any spectroscopy channel (P>0.05). We observed no reductions in oxyhemoglobin levels with the sweet stimuli, but progressively greater reductions with salty, sour, and bitter stimuli. We observed that responses to sour (P<0.05) and bitter (P<0.01) stimuli were significantly different from those to control at channel 1. We found a negative correlation between visual analog scale scores and minimum oxyhemoglobin levels (r=-0.641, P<0.01).

Conclusions: Our measurements of prefrontal cortex activity with near-infrared spectroscopy suggest it may be a useful objective evaluation of taste stimulation.

When humans eat an unfamiliar food, they first observe its color and shape to determine its edibility. Second, they smell it and then place it in the mouth if no abnormality is noted. Finally, if no abnormal taste is noted, they chew and swallow the food. As such, taste information is the last piece of sensory information considered when deciding whether to swallow food. Taste is an important sense for humans, but current research on taste sensation is limited. Clinical evaluations of taste sensation rely on subjective reports, and no objective evaluations are currently available.

Current methods for measuring brain activity in medical and clinical research include positron emission tomography, magneto encephalography, functional Magnetic Resonance Imaging (fMRI), and functional Near-Infrared Spectroscopy (fNIRS). These neuroimaging techniques have also been used in dentistry to study how various oral conditions affect the brain [1-4]. However, the results of these studies have yet to be clinically translated, as the techniques are often expensive and difficult to apply. For example, fMRI and magneto encephalography require the patient’s head to be secured and movement to be limited. Given these limitations, fNIRS offers a promising solution that is non-invasive. It measures brain activity with near-infrared light to monitor changes in hemoglobin concentration as a proxy for Cerebral Blood Flow (CBF), mainly in the cerebral cortex [5]. Furthermore, fNIRS devices can be miniaturized for specific situations, thereby allowing brain activity assessments of individuals in any position and without movement restrictions. Therefore, fNIRS is more suitable for clinical application than are other neuroimaging methods.

Taste stimulation is received by taste receptors present in the tongue, soft palate, pharynx, and larynx. The signal is transmitted by the gustatory nerve and reaches the brain through the solitary nucleus of the medulla oblongata. It is projected via the thalamus to the insular cortex and pars opercularis, which together have been identified in fMRI as forming the primary gustatory area [6,7]. The signal is further transmitted from the primary gustatory area to the Orbital Frontal Cortex (OFC), which Veldhuizen et al. have identified as the secondary gustatory area [8,9].

Recent brain activity studies have reported specific Prefrontal Cortex (PFC) activity during taste stimulation [10,11]. We therefore aimed to evaluate whether it was possible to objectively evaluate taste sensation with fNIRS measurements of PFC activity in response to four basic tastes.

We recruited nine healthy volunteers to participate in this study (6 males and 3 females; mean age=29.0 y, standard deviation=2.3 y). Participants were non-smokers and reported no history of taste, smell, neurological, or psychological disorders. They did not eat breakfast on the day of the measurements, and they restricted their intake of spicy foods and beverages the day before.

All participants provided written informed consent. The study was approved by the Kanagawa Dental University Ethics Committee (approval number 377); it conformed to the principles of the Declaration of Helsinki and the STROBE guidelines for reporting observational studies (http:// www.strobe-statement.org).

We used an fNIRS device (ETG7100, Hitachi Medical, and Kashiwa, Japan) to detect changes in CBF. The probe comprised 8 illuminators and 7 detectors in a lattice pattern, forming 22 channels. The system used 2 different wavelengths (695 ± 20 nm and 830 ± 20 nm) to measure levels of oxyhemoglobin (OxyHb), de-oxyhemoglobin (deOxyHb), and their sum (total hemoglobin; total Hb) at a 10-Hz sampling rate. The interoptode distance was 30 mm, and the system could detect CBF at a depth of approximately 20 mm below the scalp [10]. We used OxyHb concentration changes as an indicator of regional cerebral blood volume changes. The parameters used in this study are consistent with those used in a rat brain model, in which Hoshi et al. [12] showed that OxyHb is a more sensitive indicator of brain activity changes than is deOxyHb.

The fNIRS probes were arranged according to the international 10/20 system used in electroencephalography and were standardized for the frontal region that comprises the PFC. The lowest probe line was positioned along the Fp1-Fp2 line, and the center probe was located at Fpz (Figure 1). 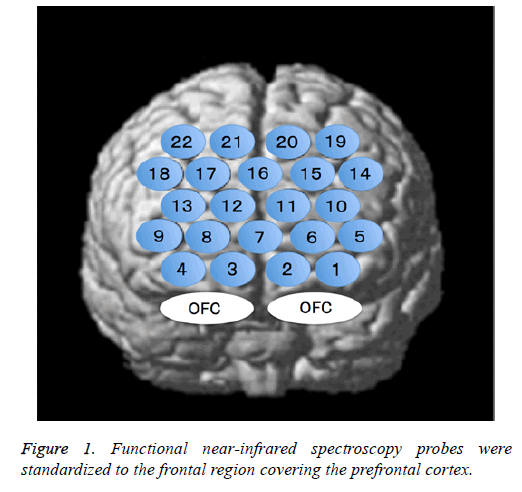 Taste stimuli and distilled water (as a control) were administered on the tongue using a dropper. The subjects held the solution in their mouths for 20 s (task) and rinsed with distilled water for 10 s. They then rested for 50 s (rest) before the next solution was tasted (Figure 2). Each taste stimulus was provided 3 times, and each subject’s data were averaged across trials. After the task, the degree of discomfort associated with the taste solution was evaluated. Measurements were taken in the order of water, sweet, salty, sour, and then bitter.

Participants rated their subjective feelings of discomfort during the task on a Visual Analog Scale (VAS), with scores ranging from 0 (no discomfort) to 10 (extreme discomfort) (Figure 3).

Figure 3: VAS form: participants checked the box in the table to indicate their comfort level.

Cortical activation was evaluated by measuring task-related decreases in OxyHb levels. We calculated mean OxyHb levels across the three trials for each taste stimulus. We selected channels 1, 2, 3, and 4 due to their proximity to the OFC. We statistically analyzed OxyHb data with the Friedman test, followed by post-hoc Wilcoxon signed-rank tests with Bonferroni corrections (Figures 4-7). We calculated Spearman’s rank correlation coefficients between PFC activation and VAS scores for all participants (Figure 8). We defined the statistical significance as P<0.05 and performed all analyses using SPSS 23.0 statistical software package (IBM, Armonk, NY, USA). 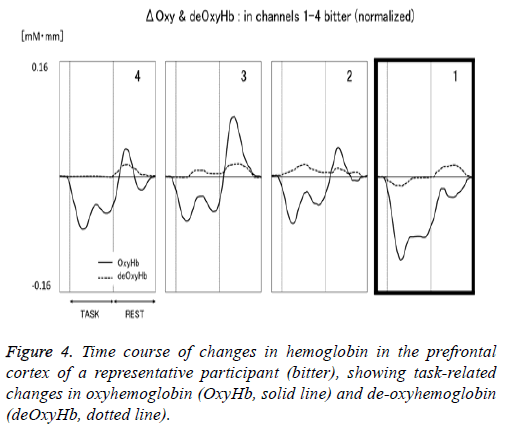 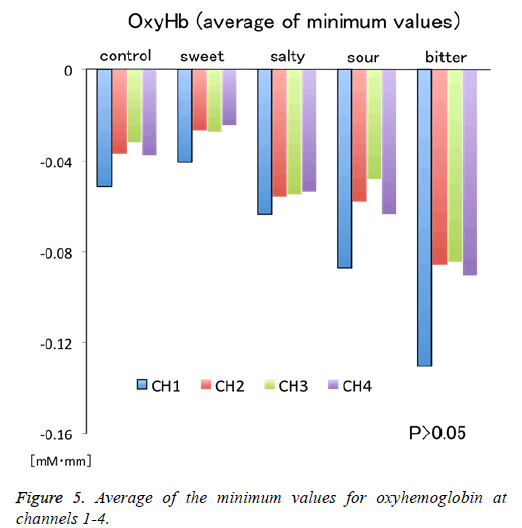 Figure 5: Average of the minimum values for oxyhemoglobin at channels 1-4. 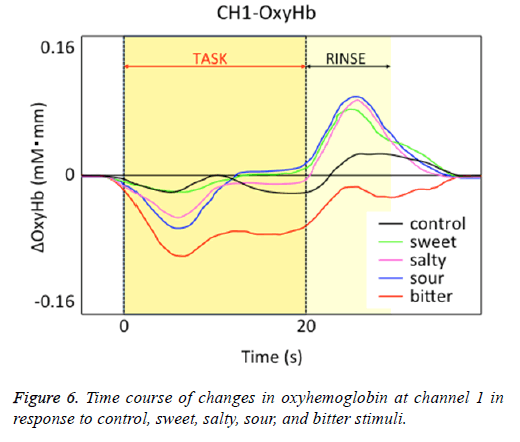 Figure 6: Time course of changes in oxyhemoglobin at channel 1 in response to control, sweet, salty, sour, and bitter stimuli. 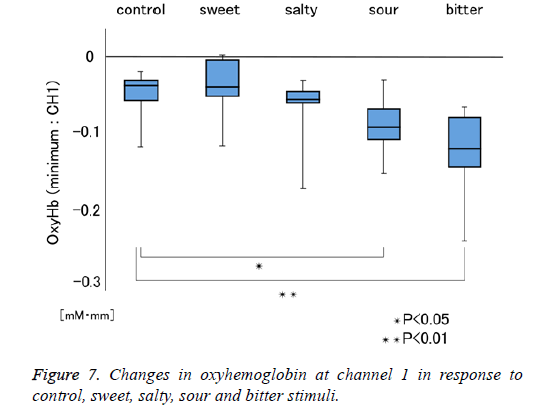 Figure 7: Changes in oxyhemoglobin at channel 1 in response to control, sweet, salty, sour and bitter stimuli. 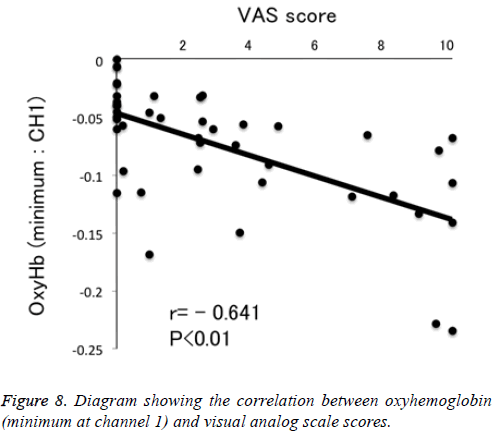 Figure 1 shows a characteristic NIRS waveform representing an average of the nine subjects. The solid and dotted lines indicate OxyHb and deOxyHb waveforms, respectively. Immediately after the start of the task, OxyHb levels fell below baseline levels at channels 1-4, with the level at channel 1 decreasing substantially more than at the other channels. In contrast, deOxyHb levels did not substantially deviate from baseline levels. Figure 2 shows the average minimum OxyHb level for all stimulus conditions at all channels. We observed no significant inter-channel differences for any stimulus. Figure 3 shows the average OxyHb waveforms for all stimuli. Relative to control, we observed no significant reduction in OxyHb levels in response to the sweet stimuli, but there were progressively greater reductions with salty, sour, and bitter stimuli. All waveforms returned to baseline during rest. We observed that OxyHb levels after sour (P<0.05) and bitter (P<0.01) stimuli were significantly lower than those after water at channel 1 (Figure 7). We observed a negative correlation between VAS scores and minimum OxyHb levels (r=-0.641, P<0.01).

In this study, we aimed to evaluate the potential use of fNIRS measurements of PFC activity as an objective evaluation of taste stimulation. We obtained evidence suggesting that such measurements may indeed be useful in this role. Indeed, the PFC receives interacting visual, auditory, taste, and olfactory signals [13]. Previous NIRS studies of taste have reported Positive Hemodynamic Responses (PHRs) in the PFC during tasting and recall of taste memories [14-16]. Our OxyHb data showed Negative Hemodynamic Responses (NHRs) in channels 1-4 during the task, in response to control and taste stimuli.

Most studies evaluate PHRs rather than NHRs, so while the underlying nature of PHRs is generally agreed upon, that of NHRs is not. Several studies have shown that NHRs are induced by reductions in CBF due to neural activity suppression and that these CBF reductions are accompanied by smaller reductions in the cerebral oxygen consumption rate [17,18]. However, NHRs do not always correspond to reduced neural activity and may occasionally be related to non-neural hemodynamic contributions or increased neural signaling, especially when NHRs occur in cortical areas adjacent to regions exhibiting PHRs. Harel et al. suggested that CBF demand elicited by increased neural activity could be met by diverting blood from neighbouring regions [19]. This “blood stealing” concept has also been proposed by others [20,21].

The NHRs observed in channels 1-4 may indicate “blood stealing” as a result of PHRs exhibited in the adjacent OFC. Furthermore, we observed a non-significant tendency to larger NHRs at channel 1 than at other channels for all stimuli (Figure 5). Bembich et al. reported that bitter stimuli evoked stronger activity in the left hemisphere than in the right hemisphere in healthy participants [22]. Consistent with this, we placed channel 1 on the left side (Figure 1). Furthermore, our data showed that left-side activity was stronger than rightside activity for all taste stimuli, suggesting that the OFC may be left-dominant during taste stimulation.

Relative to responses to control stimuli decreases in OxyHb responses at channel 1 were not significantly greater for sweet stimuli but were progressively greater for salty, sour, and bitter stimuli (Figure 6). This finding may be attributable to differences in OFC responses to different taste stimuli. de Araujo et al. reported that both water and tasteless artificial saliva activated the primary gustatory area [23]. Consistently, we observed NHRs in response to our distilled water negative control, which may also be due to “blood stealing” similar to the taste stimuli.

We observed significant differences between the OxyHb changes elicited by sour and bitter tastes, and those elicited by control stimulation (Figure 7). We also observed a negative correlation between VAS scores and minimum OxyHb levels at channel 1 (Figure 8). These results highlight the usefulness of NIRS measurements to objectively evaluate taste stimulation. Further study may make it possible to evaluate at which stage of the taste pathway a taste-blind patient is affected. Similarly, patients complaining of taste disorder due to the metal crown on a tooth may be able to evaluate whether this is indefinite complaint.

There are some limitations to this study that should be borne in mind when evaluating our results. We did take steps to minimize non-taste stimulation as much as possible, but such stimulation cannot be entirely eliminated. Furthermore, the amount of saliva and the tongue surface area varied among participants. To obtain more accurate results, future studies must consider these factors. 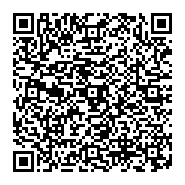