Objective: Linked Color Imaging (LCI) is a newly developed endoscopic imaging technique, which has been proved to be able to improve the diagnostic efficacy. Here, we aimed to investigate the effects of nurses assisted LCI chromoendoscopy on the detection of colonic polyp.

Colonoscopy is a useful method for diagnosing and treating colorectal cancer. In recent years, as more attentions have been paid to the screening and surveillance of colorectal cancer, the number of colonoscopy has been on the increase [1]. In addition, how to guarantee the quality and improve the detection rate is still the focus of the researches. In fact, there are a series of different factors that could influence the detection rate, including gender, age, withdrawal time, bowel preparation, and endoscopic device [2,3].

Linked Color Imaging (LCI) is a new endoscopic imaging technique, which simultaneously combines the blue laser and white to achieve a high brightness [4]. LCI mode can clearly observe the mucosal surface vessels and structure, and make the red areas redder and white areas whiter. This color enhancement is able to help the endoscopists detect the changes of the mucosal vessels and structure easily and confirm the corresponding diagnosis [5]. Previous studies indicated that the assistance from the nurses may influence the detection rate during endoscopic examination, and this may alleviate the patients’ discomfort [6,7]. In this study, we analysed the effects of nurses assisted LCI chromoendoscopy on the colonic polyp detection rate, by evaluating and comparing the detection rate and missing rate. These results could provide useful evidence for modifying the current endoscopic diagnostic and therapeutic strategy.

A total of 200 patients who underwent colonoscopy from August 2015 to October 2016 in our endoscopy center were enrolled. If the patients had contraindications for colonoscopy, had multiple colonic polyps (≥ 15), had poor bowel preparation, were diagnosed as inflammatory bowel diseases or did not undergo the whole colonoscopy examination, they were excluded from the study.

This study was approved by the Ethic Committee of 307 hospital. All the patients gave their written informed consent.

All the statistical analysis were conducted using SPSS 17.0 software (SPSS Inc., Chicago, USA). The categorical and continuous data were shown as percentage and mean ± standard deviation, and the differences were compared using independent student t-test and chi-square, respectively. A two tailed P value less than 0.05 was considered to be statistically significant. 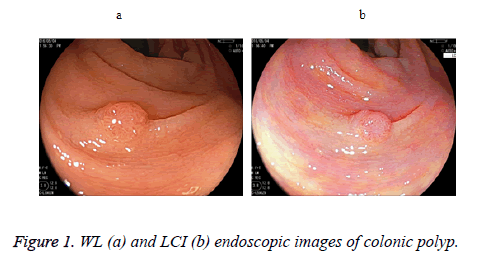 Figure 1: WL (a) and LCI (b) endoscopic images of colonic polyp.

The left and right colonic polyp detection rate in intervention groups were both higher than those in non-intervention groups (Table 3). LCI had better differentiation for size and location of polyps and the intervention from nurses also contribute to the improvement of endoscopic diagnostic efficacy.

In recent years, the prevalence and mortality of gastrointestinal tumors have been on the increase all over the world [8]. Although great progress has been made on the conservative therapy, surgical resection remains to be the main treatment for such malignancies. Endoscopic resection can be used to detect and treat early cancer and precancerous lesions in gastrointestinal tract, which may play an important role in reducing the occurrence and mortality [9]. The changes of mucosal color and morphology provide valuable evidence for the endoscopic diagnosis of gastrointestinal diseases, and image enhancement endoscopy techniques including NBI, FICE, BLI and LCI greatly improve the diagnosis of early cancer and precancerous lesions [10,11]. WL could not observe the mucosal surface vessels clearly. LASEREO system, as a newly developed endoscopic system, combines the laser and unique image processing to obtain a clear observation of mucosal surface vessels and ultrastructure [12]. LCI is a color enhancement technique added to LASEREO system. LCI makes the red areas redder and the white areas whiter and minor color changes can be identified under LCI mode [13,14].